Christmas is right around the corner and Gamers all around the world are preparing themselves for a noob invasion. If you’re into online gaming, you know exactly what I'm talking about. Christmas Noobs! Here is a list of the top 5 First Person Shooters to keep an eye on for level one noobs! 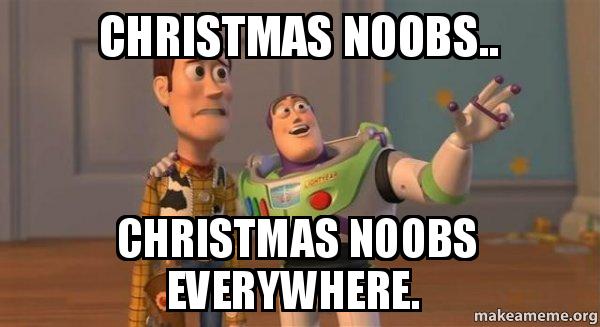 The franchise that started the Christmas Noob tradition earns the top spot this year for other reason than it's the one that started it all. Infinite Warfare and Modern Warfare will be packed with more noobs than any other title this year. You should be finding lobbies loaded with the lowest of level players, but don’t let that fool you. Some noobs aren’t noobs at all, but noobs in disguise that are using an alt account.

I am particularly excited for this one. Battlefield 1 is easily one of the best games this year and a lot of CoD players that have never stepped foot on the “Battlefield” (pun intended, sorry not sorry) have begun to transition to BF1. The real fun begins when you see players that are clearly trying to double jump away from bullets. Some pretty funny moments are sure to be had!

While levels don’t offer any in-game advantages, a level tells you how experienced a player is with this specific game. A lot of players will be using alt accounts so they get in on fresh players. If you don’t want to use an alt account, try and party up with a low level player and allow them to be party leader. This should be enough to help you find the levels you want in the pubs. Overwatch won game of the year at the game awards this year, so we should see a lot new faces in the last few days of 2016. I cannot express how disappointed I am that more people didn’t give TF2 a chance this year. It's a very fast and fluid title that has a great campaign to boot. The multiplayer is a lot of fun and the Titans are a blast to play with. I am sure there will be a boost in player numbers after the holidays, though the count is pretty solid as is. The noobs should be pretty easy to take down this holiday season, so don’t forget to log in and level up!

DOOM was a long awaited follow up to the classic franchise that changed everything back in its debut. A fast paced and intense multiplayer game that is sure to be jam packed with noobs. If you’re looking to switch things up from the FPS norm, this may be the way to go. Be careful though, even noobs can manage slaughter the most experienced players in this game.

And there you have it, the top 5 FPS titles you’ll be sure to find waves of noobs in, this holiday season. Remember, the holidays are all about giving, so make sure you go out there and give some Christmas noobs a warm welcome, a can of whoop’ass and maybe a teabag or two. In the world of video games, it really is better to give than receive!

No matter what you may or may not celebrate, I hope you have nothing, but a joyous end the year and a wonderful start to the next. Be sure to check back at the end of the month, to read this year's list of Gamer Resolutions for the New Year! Happy Gaming!