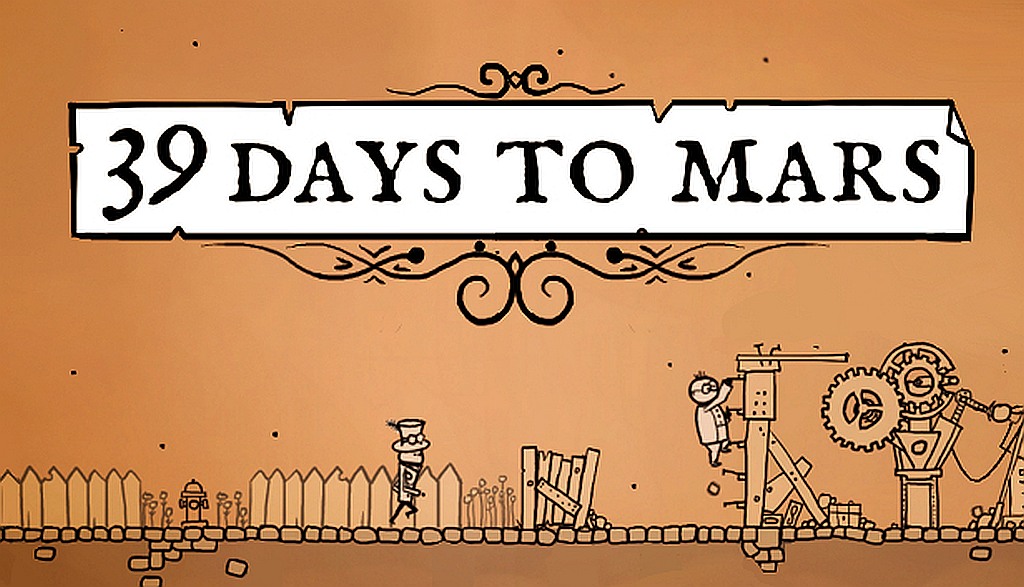 For a time during this generation, I was worried that local co-op games were dying out. We started seeing less and less of them on the PS4. Thankfully, things have begun to pick up again in the last year or two. Living in a household where my fiancé (who I refer to as my “Player 2”) is a hardcore gamer like myself means that cooperative experiences are a great way for both of us to enjoy a game together.

39 Days to Mars bills itself as a cooperative adventure, and that is absolutely the best way to experience it (You can play alone too). Together with your partner, you must guide two 19th century explorers on a quest to reach Mars in a rickety and oftentimes unqualified ship known as the HMS Fearful. Should you join these two gentlemen on their journey into the stars, or would your time be better spent here on Earth? Let’s find out.

Tea and Scones For Two, Please

As I mentioned earlier, we are a household that fully supports local co-op, so when 39 Days to Mars caught my eye, I knew it was something we should check out. While you can play the game single player with an AI partner, I would not recommend playing it solely for this reason.

It’s nice to have the option, but playing cooperatively is, in my opinion, the only way to really experience this game. Since it is on the shorter side, it’s incredibly important that you make the most of your 1 to 2 hours through the journey it offers.

Now, those who want to all the trophies will find plenty of reasons to play through it more than once. You can also fail certain segments of the game and it will keep going without any fail state or game over, which I feel conflicted about, but this offers another reason to play again if you want to see how things change when you succeed.

So, while it is short, 39 Days to Mars manages to pack a lot of interesting ideas into its runtime. In terms of story, you play as Sir Albert Wickes and The Right Honourable Clarence Baxter. They act exactly how those names would suggest. They are 19th century explorers and gentlemen who treat life and death situations the same way they treat tea and scones: with the utmost importance.

The setting is one of the greatest strengths in 39 Days to Mars, as it offers a warm, almost comforting take on an otherwise perilous concept. Things go wrong almost constantly while on your journey, but the level-headed reactions from the characters and their rigid focus on having tea before they do anything strenuous is both funny and comforting to me.

The humor never had me dying of laughter, but it often got a chuckle out of me, and I liked the personalities of the two leads a lot, even if they don’t change drastically (or at all) as a result of their trip together.

The meat of the game are puzzles and activities you’ll need to perform as your ship makes its way through space towards the red planet. There is a small amount of downtime between each event where the days tick by in the upper left corner, but the game makes the most of its packed runtime by constantly throwing new things at you.

To that end, the variety in the puzzles and tasks is quite good. The only activities you ever repeat are when the main characters stop for a spot of tea or a scone, and even then these tasks vary in their objective each time.

I’m keeping details out of the review, due to the short nature of the experience and the discovery of each task or puzzle set before you. In terms of difficulty, the amount of time you’ll spend on each event varies widely. Some are quite easy to figure out and complete in a manner of seconds, while others can take a few minutes or more depending on how you handle the sometimes unwieldy controls.

There was one particular puzzle that required both players to manipulate a tool and perform precise actions based on rules you can find elsewhere on the ship. This was my least favorite puzzle because the solution was fun to reach, but actually performing the task was an exercise in frustration.

We knew exactly what we had to do, but the floaty and imprecise controls for that particular puzzle made it more difficult than it needed to be and brought the otherwise smooth pacing to a halt. I had a similar issue with a late game activity that could have benefited from more responsive controls, but the majority of the gameplay is fresh and interesting throughout.
One thing I felt conflicted about was the choice to remove any game overs or retries. Failing an event (which is separate than a puzzle, mind you), doesn’t give you the chance to retry and instead simply moves forward. On the one hand, it keeps the game from stopping more than it needs to, but on the other hand, I wanted the opportunity to try again without starting the game from the beginning.

Despite some of these qualms, I think 39 Days to Mars is a largely wonderful cooperative experience. While it doesn’t have a ton of replay value, and it’s not very long, it’s a great way to incorporate another friend or partner into your gaming without throwing them into something complex like an RPG.

Given the concentration of different mechanics and puzzles in 39 Days to Mars, I can see why it’s a shorter experience. That being said, there are times when it feels like it’s scratching the surface of something deeper, but it never quite gets there. I really like what I played, but I do wish there was more of it, even if that meant doing something else in between all of those largely wonderful puzzles.

A Charming and Memorable Journey 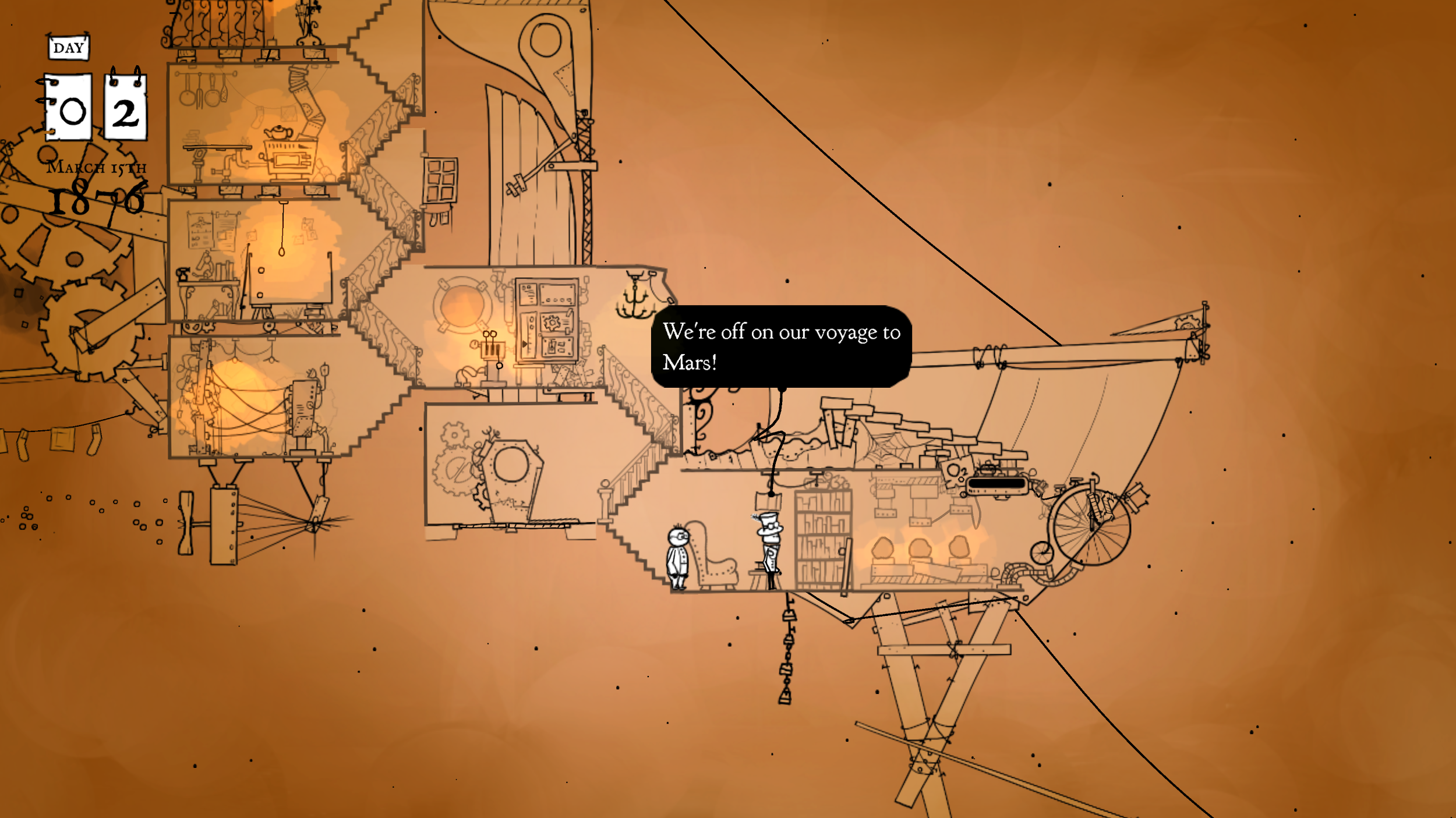 The art style and soundtrack for 39 Days to Mars are both superb. The simple victorian style presentation gets the point across perfectly while also offering a unique visual identity. I particularly enjoyed the art in the game’s puzzles, which plays with different styles and detail.

The soundtrack, while predominantly piano, is both engaging and relaxing. The only time it bothered me was when I was stuck on the aforementioned puzzle with the wonky tool and physics. At that point, I didn’t want the soundtrack trying to calm me down.

Despite that small misstep, though, the overall presentation in 39 Days to Mars is both charming and memorable in a way that I really enjoyed. It’s a world that made immersion effortless, and the soundtrack’s warm and inviting tones sealed the deal for me.

I wouldn’t recommend going it alone, but if you have someone you can play this with, there’s a lot to love about this experience. It has a lot of great ideas that I would love to see expanded on in a sequel, but I imagine the developers will have themselves a well-deserved cuppa before moving forward on a sequel.

Now, if you’ll excuse me, I have some tea and scones to make before I finish this review.

A copy of 39 Days to Mars was provided to PS4 Experts for review purposes.