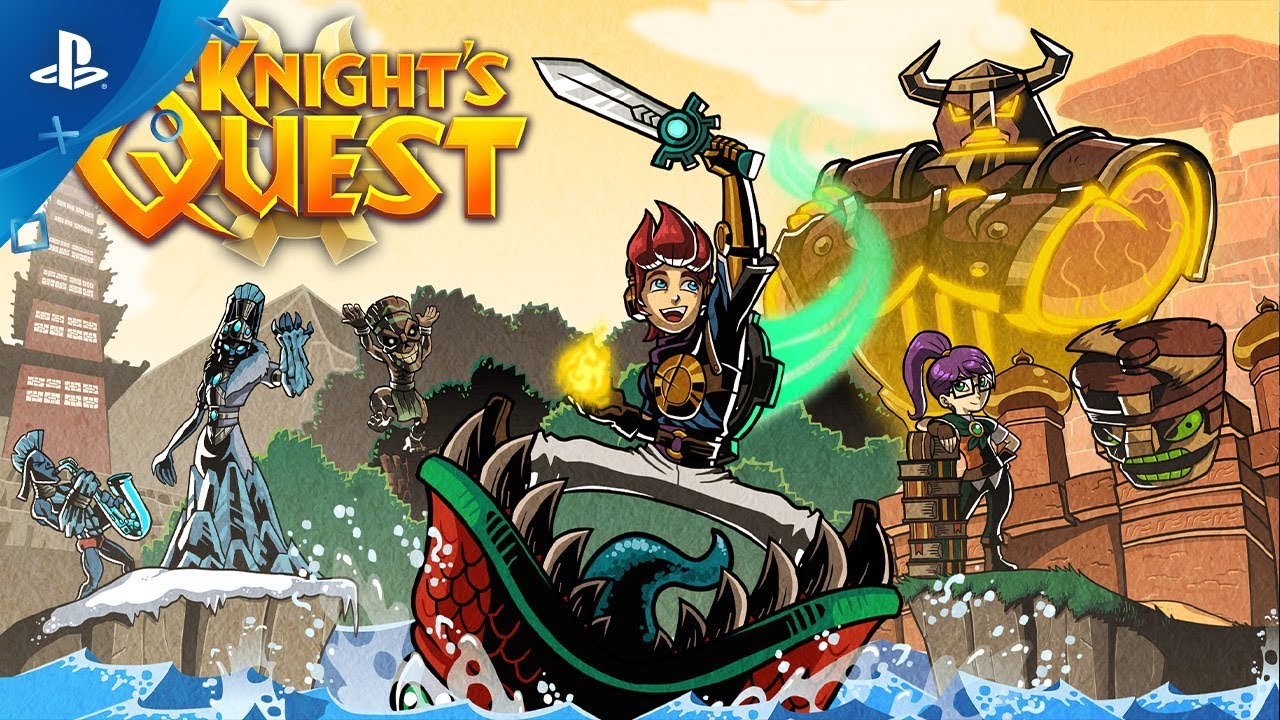 The Legend of Zelda has influenced countless games over the years, but only a few have come close to reaching the same heights in terms of story, design, and gameplay. It’s a hard formula to nail down, mostly because it does a lot of things differently than what we’re used to in modern gaming.

A Knight’s Quest for PS4 takes up this mantle and seeks to provide an experience that acts as a more humorous take on the Zelda formula. Does it manage to reach these lofty ambitions? Or, does this quest feel like busy work? Let’s find out.

A Humorous Take on The Zelda Formula

A Knight’s Quest makes a great first impression. The game throws you right into a dungeon of sorts and offers simple tutorials on all of the controls and mechanics before things start to go south very quickly.

After the opening, the game whisks you off to the main hub where a local engages you in some pretty hilarious conversation involving illegally milking cows (a nice Lon Lon Ranch reference). From here, the structure of the story becomes apparent, and you even get the chance to pick up a few side quests as time goes on.

The game’s story is told through text dialogue and through occasional cutscenes that showcases some excellent ancient art while you learn about the history of the world and the goal of your quest. Our protagonist, Rusty, has set in mention world-threatening events as a result of clumsiness, and his role as a semi-willing hero is pretty funny throughout.

Where Zelda often has a silent protagonist, Rusty’s snarky remarks and moments of complete incompetence make him endearing in a “how are you going to make this worse?” kind of way. Dialogue ranges in terms of comedic quality, but I did find myself laughing out loud on several occasions.

I particularly enjoyed how the humor incorporates very modern concepts like lactose intolerance, despite the fact that the game is set in a sort of medieval era that incorporates some electrical elements.

As a kind of comedic take on the tropes of the genre, I think A Knight’s Quest succeeds. As a pure piece of comedy, it’s inconsistent in the quality of its jokes.

From a gameplay perspective, A Knight’s Tale succeeds in a number of elements, but it fails to truly nail all of the disparate elements of an experience like this. Let’s start with combat. A basic attack, dodge roll, block, and parry are all introduced pretty early into the game.

You’ll get additional abilities as you progress, but they often don’t offer a major advantage in combat over straight sword fighting. Your first weapon, a wooden sword, takes far too many hits to kill even a simple enemy, but the next sword you receive early on makes things better.

Upgrades are possible, thus making you more effective in combat, but it takes far too long to receive even your first one. The combat works well despite the lack of consistent progression. I liked being able to lock-on and wail away on my enemies. Dodging feels relatively responsive, but the parry is perhaps my favorite move.

Not only can you reflect arrows back at enemies, but the first parry powers up your attacks and lets you perform some exciting flourishes. It’s these moments where combat shines, and it makes me wish the game had more moments like it.

One thing I did encounter during combat was an issue where I would lock onto an enemy, unleash a flurry of attacks, and sort of drift off to the enemy’s side, thus losing my lock-on. It was odd, and required me to readjust the character so they wouldn’t lose the lock again.

Boss fights do offer some interesting mechanics and strategies, but most enemies can be defeated with very simple combat. It leads to repetition faster than I would like, but it’s by no means a bad combat system.

Moving on to traversal. Getting around A Knight’s Quest’s world is fine, if a little clunky at times. I liked the wall running, and while jumping feels responsive, grabbing and catching ledges could sometimes fail me. It wasn’t a constant problem, but it did creep up from time-to-time. The lack of precision in the controls also makes some of the more demanding platforming harder than it needs to be.

The real issue with traversal is how easy it is to get completely lost or overwhelmed in A Knight’s Quest. Making a huge game like this requires an insane amount of planning and design, and while it’s certainly big, finding your objectives or simply seeking the way forward can be a chore.

Not only that, but you’ll see so many things like collectibles floating high above that you can’t reach until later. It’s a good way to encourage exploration, but it’s so much that you’ll never remember it all. A way to combat this would be to have an interactive map that helps you track things like that. Unfortunately, A Knight’s Quest has a pretty barebones map and very little help in terms of waypoints or direction.

As a result, you’ll find yourself confused and lost more than anyone should be in a game where progression is key to keep the player engaged. All of that being said, I saved the best for last. I really enjoyed the puzzles in A Knight’s Quest. Clever use of the environment and your latest abilities made for some fun “a-ha!” moments that are crucial in this type of game.

If the other elements of the game were as successful as the puzzles, A Knight’s Quest could have been a great Zelda homage with a comedic spin. As it stands, I enjoyed my time with the game, but it fell short in one too many ways to make it an easy recommendation.

Playing on a PS4 Pro, A Knight’s Quest is absolutely gorgeous at times. The area just outside the main hub, Temple Field, is a sight to behold each time you emerge from the loading screen. Vibrant hues and massive environments are accompanied by superb light rays that cut through the ruins and foliage to create some truly beautiful setpieces.

There’s also a nice variety in the environments as you explore tropical areas, snowy mountains, and lava-filled caverns. Water is particularly stunning, but the characters that populate the environments are clunky by comparison. They work fine, but it’s odd to see the chunky design they have placed beside such pristine landscapes.

On another positive note, the soundtrack is absolutely amazing. This aspect of the game comes quite close to the iconic feel of Zelda’s music by offering epic orchestral melodies and some excellent instrument solos. I’m particularly partial to the French Horn work in the soundtrack as I played it for six years.

A Knight’s Quest is a game that buckles under the weight of its ambitions, but that doesn’t make it a bad experience. There are moments of hilarity, epic setpieces, and some truly awesome puzzles. It’s a shame all of the pieces don’t come together as well as they could, but I still found myself enjoying the majority of my time with Rusty in his clumsy, funny, and undeniably beautiful adventure.

A copy of A Knight’s Quest was provided to PS4 Experts for review purposes.