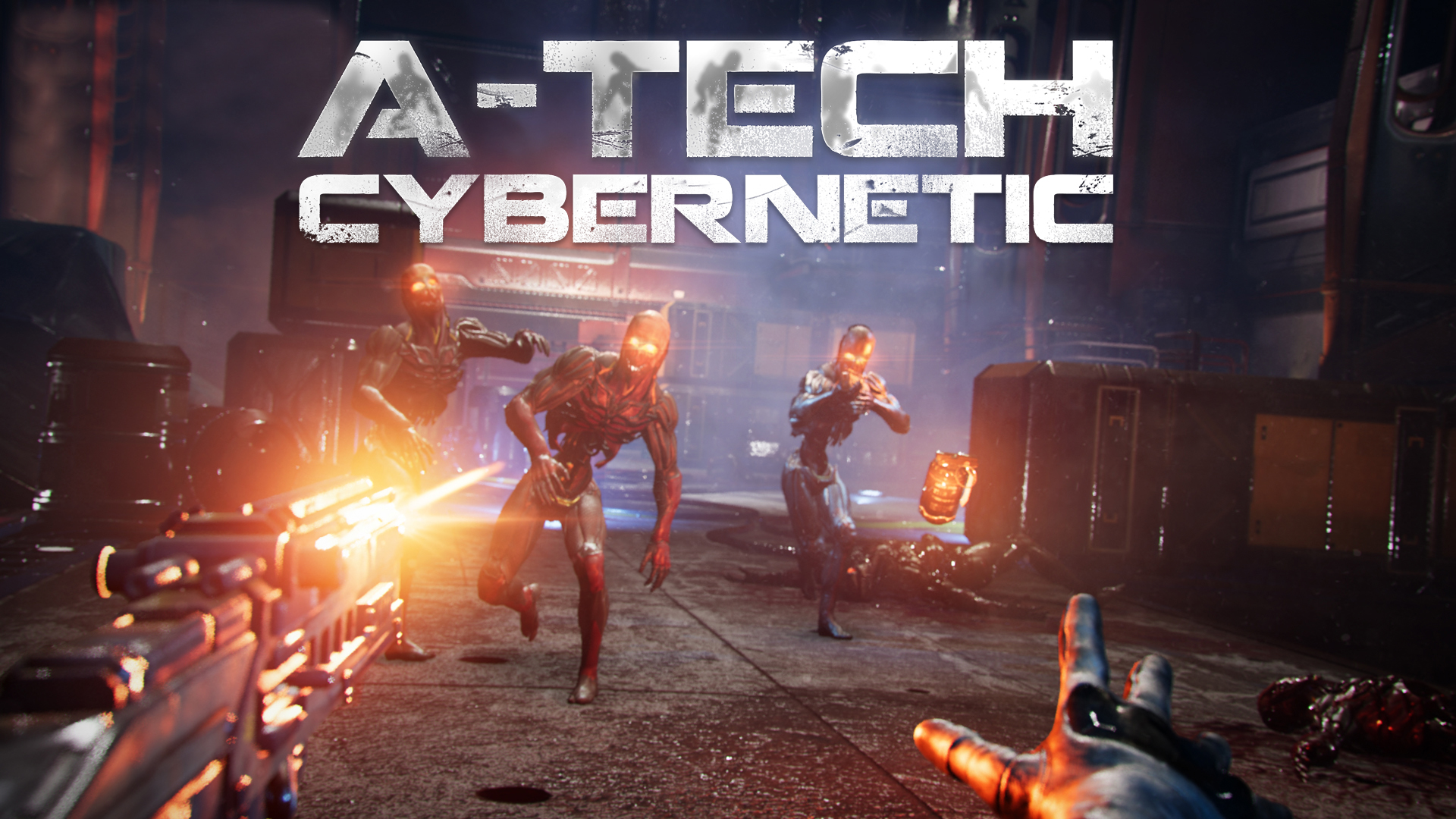 I look back fondly on the days of the arcade. There was a place near to me (the name escapes me), that was filled with pinball machines, classic arcade cabinets, and of course, light gun shooters like Time Crisis and House of The Dead. It also doubled as a bar, so you always left smelling like cigarette smoke and booze, but it was worth it.

The rise of shooters in VR has brought me back to those days of holding a peripheral and firing at oncoming enemies. It’s also expanded the concept and added far more immersion, but sometimes I just want to go back to those simpler times. A-Tech Cybernetic may not be on rails, but something about it made me feel like a kid in that arcade again. Let’s find out how it fares among the other shooters of 2020.

A Mutation of Various Ideas Wrapped in a Solid Shooter

It has been amazing to see the evolution of virtual reality on consoles. As a day one owner of a PSVR headset, I’ve been playing titles since Astrobot was just a demo on a free Playroom download. In terms of shooters, we’ve moved from on-rails options like Until Dawn Rush of Blood, to wave-based shooters (of which there are many examples), to fully realized FPS games that let you walk around and interact with the world.

A-Tech Cybernetic falls into that last category, but it also feels like it has one foot in the past. This isn’t necessarily a bad thing, but it does give the game a bit of an identity crisis. Starting with the story, you take control of a person in some sort of station owned by a biomedical company.

As is the case with many fictional biomedical companies, things have gotten out of hand and mutants now roam the halls of the entire complex. Right off the bat, the game oozes with similar tones as DOOM and Dead Space, but then the narrator starts talking and things get confusing.

You see, as part of the story you are simply occupying this body, so the person who typically controls it can talk to you. Given the setting, I was thinking this would lead to some psychological horror, perhaps in the vein of Frictional Games’ SOMA, but instead the narrator takes on a flippant sort of humor that’s odd at first, but genuinely hilarious in other moments when he misspeaks.

It caught me off-guard at first, but it was certainly unique. As things develop, the narrator does a good job of giving you some background on what’s going on, so it keeps the pacing quick as you focus on the moment-to-moment survival.

Gameplay in A-Tech Cybernetic is a combination of melee combat, shooting, and some light puzzles. The environments can start to become repetitive pretty quickly, but there’s room for exploration as you gain the ability to unlock certain doors and explore for ammo, health and journal entries on holographic tablets.

Enemies themselves have some interesting designs that incorporate bright neon colors with flesh and technology laced through them, but their attacks mostly rely on charging towards you at various speeds.

They also tend to sneak up on you, which gave me a few scares. Thankfully, the melee combat is pretty satisfying as your swings result in thick sounds of impact and often send enemies reeling to the ground. It’s not always perfect as sometimes enemies would ragdoll through the air hilariously before hitting the ground, but I enjoyed it nonetheless.

Shooting is quite satisfying, and there’s a nice arsenal of guns for you to find. I played A-Tech Cybernetic standing, reloading my swinging my guns through my holsters felt awesome when I was in the heat of battle.

Pulling off headshots while dual-wielding pistols is just plain fun. Outside of the main story mode, a wave-based Swarm mode also adds some nice replayability. The enemies may not be incredibly complex in their behaviors, but after a few waves I found myself holding back the tide with a machine gun in one hand and a shotgun in the other, firing in two directions simultaneously.

Like a cybernetic version of John Wick, I loved throwing down empty guns and rushing to grab another type as more unlocked and the waves became more difficult. Since I have a good set of “VR legs” as it were, I opted for smooth movement and turning, all of which felt great using a set of PlayStation Move controllers.

Other options are there for you if you need them, including a teleport that’s always available and needed in certain cases. I also loved the ability to pull items toward you from afar or off the ground. Very helpful when you’re not using a 360-degree headset.

A-Tech Cybernetic doesn’t reinvent the wheel with its story or gameplay, but it feels nice and solid in motion. Most importantly, it’s fun! Sure, the enemies are incredibly complex, and the animations can be stiff or odd at times, but it all works in motion and that’s enough to make me overlook some of the shortcomings.

Some Rough Presentation With Excellent Tracking

One thing I’ve noticed while playing A-Tech Cybernetic is that the presentation can also feel a little dated, especially when you compare it to the PCVR version. Obviously PSVR (even with my PS4 Pro) doesn’t compare to the specs of those headsets, but I still feel like things could have been pushed a little further in the presentation department.

It doesn’t look bad by any stretch of the imagination, but it’s not going to rival some of the more recent releases on the platform. Really though, A-Tech Cybernetic offers a solid story and a fun wave-based survival mode with a cool selection of weapons and plenty of melee options to keep you busy.

It took me back to a simpler time. Look at it this way: it feels like the kind of thing you would have paid $20 to play for 20 mins at some fancy arcade trying to stay with the times by offering VR experiences. Here, you pay that and you get to come back as much as you want with a full story mode that pairs with your Swarm mode.

Looking at it that way, I would pick it up and never look back.

A copy of A-Tech Cybernetic was provided to PS4 Experts for review purposes.