Very few games have explored the concept of playing as a blind character, but it’s an idea worth pursuing in my opinion. It’s for this reason that Another Sight immediately jumped out at me. In this fantasy steampunk adventure, you play as Kit (short for Katherine) and a cat named Hodge who find themselves suddenly beneath the streets of London.

With her sight taken from her, Kit must rely on Hodge to help her navigate environments and interact with famous figures from history like Claude Monet and Nikola Tesla. Does this unique setup make for an eye-opening experience? Let’s find out.

A Charming, if Familiar, Gameplay Loop

Another Sight is set in London during the late 1800’s. You play as a teenage girl named Kit who, after a nasty fall, finds herself beneath the streets of London. Her sight is suddenly gone, leaving her with little to no way out. She is greeted by a cat named Hodge who helps her navigate and manage the world around her, despite her sudden blindness.

From the very beginning, Another Sight takes a lot of cues from Alice in Wonderland, but it’s more of an homage than anything. Kit and Hodge resemble Alice and the Cheshire Cat (especially if you choose the corresponding skin for Hodge in the main menu), but the similarities stop there.

Yes, Kit does find herself in a strange and surreal world beneath the city, but the story takes things in a unique direction. As the story goes on, she comes into contact with historical figures like Thomas Edison, Claude Monet, Nikola Tesla. It’s actually an interesting tale, but it takes too long to get moving, especially considering the game’s length of 4-5 hours.

During the opening hour, my curiosity waned as I wished for more dialogue, more information, or more of any kind of development. This would normally be where the gameplay keeps you engaged, but let’s talk about Another Sight’s mixture of a blind protagonist and puzzles.

With the ability to switch control between Kit and Hodge, you’ll have the opportunity to see the world in multiple ways. Kit herself can only see a very small amount around her, represented by colors that emerge when she hears something.

Hodge, on the other hand, can see everything just fine. He can also meow with the triangle button if you’re controlling Kit and offer a temporary view around her if he’s nearby. On an unrelated note, my dogs absolutely loved this mechanic and I used it to constantly troll them when they were in the room.

My German Shepherd even sat on the couch and watched the game for a time, following Hodge as he scurried through environments. Even Kit’s view of the world, splashed with bright colors, seemed to keep her attention even more than most games. Again, not related, but if you have dogs they may actually enjoy playing Another Sight with you.

Back to the gameplay. Kit herself moves understandably slow when she’s uncertain of her environment, but the puzzles often require both Kit and Hodge to tread the same ground. This results in some trying repetition, especially when you need Kit to push something like a box. Hodge moves much faster, but the platforming controls feel a little too stiff. There’s a different animation for a running jump and one for when you’re standing still.

The running jump works fine, but the vertical jump is finicky more often than not, resulting in some odd moments where Hodge is just leaping into the air and missing the ledge you need him to grab onto.

I could have done without some of the backtracking and the need to move both characters. This could have been solved by an auto-follow mechanic for Hodge, or even local co-op where someone else can control Hodge for you.

On top of the repetition in the puzzles, these brain teasers never really push your skills. This would be fine if the game’s pacing were better, but the combination of relatively simple puzzles with repetition in the exploration combines to dull the experience somewhat.

Another Sight does do some unique things with its blind protagonist and the cat companion, but its gameplay doesn’t fully take advantage of the concept, and the puzzles never quite hit that sweet spot in terms of difficulty. Fans of puzzle platformers will find plenty to like here in the story and the world, but it’s not going to redefine the genre.

An Experience That Places Visuals Front and Center 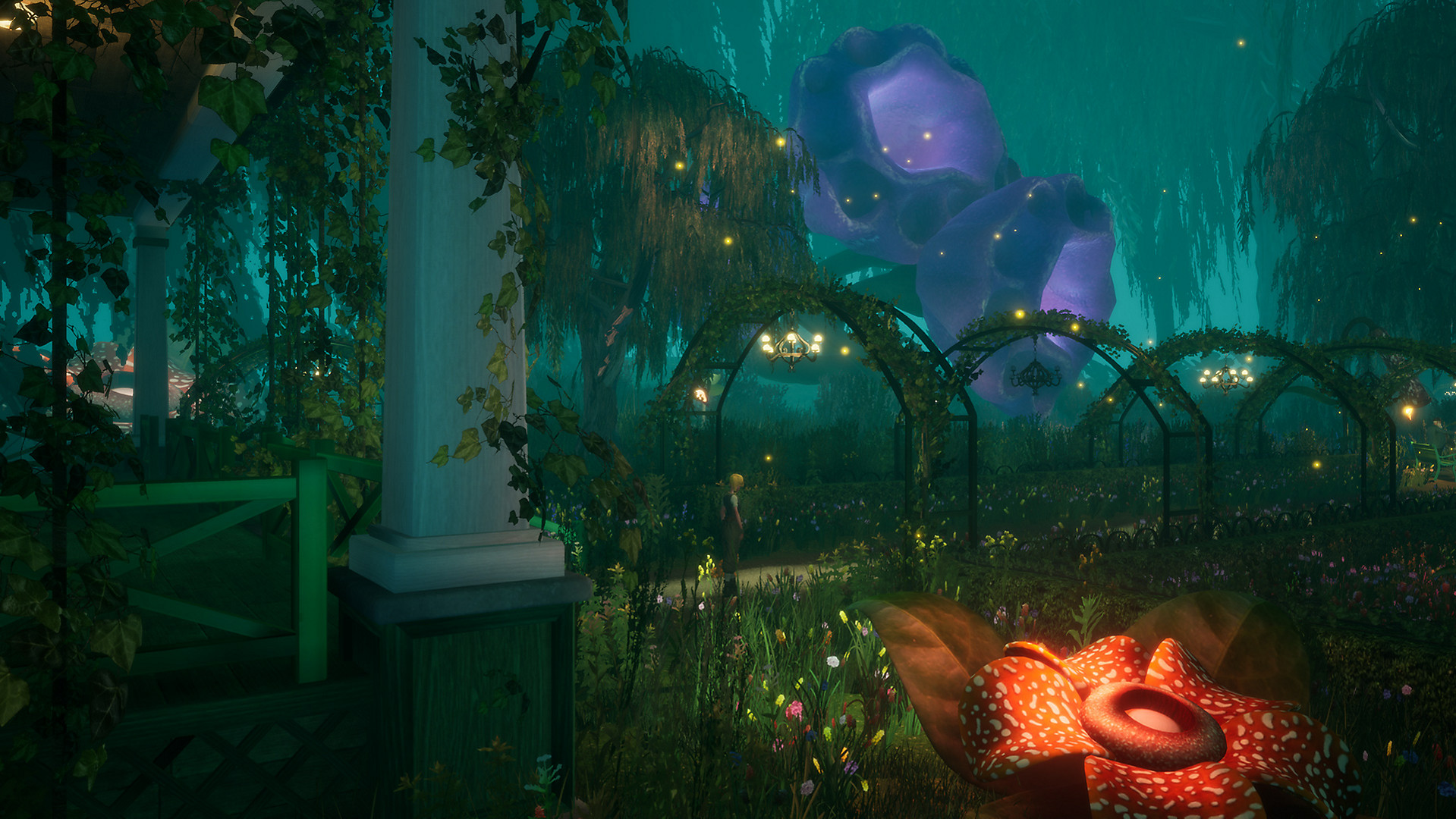 Another Sight’s visual design is the strongest element of the game by far. The environments span from dark sewers to bright psychedelic gardens, to surreal landscapes. The way sound presents itself as color in Kit’s perspective is also wonderful, especially when things like moving trains or steam flowing through pipes becomes a work of art in and of itself.

While I wish Another Sight had pushed harder on the gameplay front to really make the protagonist and her situation feel like a core part of the puzzles, Another Sight still does a lot right from a narrative and visual standpoint, which makes it worth a look if you’re a fan of puzzle platformers.