Rhythm games had a golden age back in the days of the PS3 and Xbox 360. I look back on those countless Rock Band parties very fondly. I was particularly known for my amazing vocal rendition of “Du Hast” from the German band Ramstein. Since then, we have seen small releases here and there.

VR seems to be the next great stage for those who want to embrace and embody the music they love by performing alongside it. AUDICA on PSVR, from Harmonix (the creators of Rock Band) brings a pair of guns to the party, along with a licensed list of superb tracks. Can the studio make lightning strike twice (or in this case a fifth or sixth time)? It’s time to find out!

A Bombastic Treat For The Senses

When people first see AUDICA, they are going to draw comparisons. While I usually refrain from doing so in my reviews as I think the games should be judged on their own merits, let’s just clear the air. Yes, this is a similar concept to Beat Saber. You could categorize both in the same genre, but for me, that’s where the similarities end.

Both can (and should) exist in the same universe, but AUDICA to me is for the kinds of gamers that cut their teeth on plastic guitars and spent countless hours trying to master “Through the Fire and The Flames” by Dragonforce. For these people, it was about more than just playing along to the beat. It was about merging with the music and truly putting on a performance.

Again, these are things you could apply to both games, but I truly feel like AUDICA exists in a league of its own thanks to clever mechanics, excellent presentation, and a track list that you could easily find in my Spotify library.

Comparisons aside, how does AUDICA work? The game offers two tutorials that I highly recommend you check out before diving into the campaign or free play modes. In essence, you will control two pistols with the Move controllers and shoot targets that match the gun’s color (which you can customize).

Targets must be hit on the beat, but points are awarded for both timing and accuracy. This means that getting a bullseye nets you maximum points, while hitting the edge offers less. These targets represent the foundation of the concept, but there is a lot more to do as you progress and up the difficulty.

Like other rhythm games, AUDICA adds new mechanics to keep things fresh as the difficulty goes up. Yes, there are more targets, but there are also new challenges to consider. On the beginner difficulty, you’ll shoot targets, navigate targets that must be shot simultaneously, and hold the trigger for diamond-shaped targets until they explode.

The targets where you hold the note are a particular favorite of mine as they cause lightning to shoot from your gun and the target to spin off into oblivion before exploding in a bright display. Combine this visual spectacle with superb use of the vibration in the Move controllers, and you have a raver’s dream inside of a headset.

As things get harder, you’ll need to worry about targets that include dots running away from them. These require you to shoot and then paint a path with your gun across the trailing dots. The game will also throw spheres at you which you must smash with your gun as they pass by. Points are awarded for these based on how hard you hit them (2K being the max). On the highest difficulties, you'll even need to fire your gun horizontally or vertically for the shots to count, based on the orientation of the target.

When you finish a song in AUDICA, the game really does an awesome job of breaking down your score. You get a star rating, but you also see a graph showing your average timing, and a dot graph showing how your accuracy panned out.

A leaderboard also helps you figure out where you stand. All of this is available in the free play mode, but the campaign also adds some additional challenge, requiring you to complete specific tasks while also earning a passing score on the song.

These challenges were mostly great, but a few stumbled for me. I love things like having to hit twenty targets while looking away from the screen, but others that required me to move a total of 500 meters during the song felt more difficult than they should be, especially given how much I danced while playing.

Lastly, I would be remiss to not mention the track. This is where Harmonix shows their incredible taste in music once again. From mainstream EDM, to artists I thought only I knew, to standouts like “Highway to Oblivion” from metal band Dragonforce (so good), the game has an excellent selection of music at the outset.

A season pass option also allows you to get new tracks coming out in the next month or so, some of which are already available. Some people may feel a little apprehension at the price for both the game and pass, but having played many hours of AUDICA, I would not hesitate to buy it for full price.

From a gameplay perspective, it’s a game that rewards skill and tests you in unique ways that make each song incredibly replayable on higher difficulties. It’s going to beat you over the head at times like a band director on the first day of band camp, but you’ll want to come back again to prove yourself. It’s addicting, intoxicating, and a true return to the glory days of the genre.

The Master of the Genre Returns 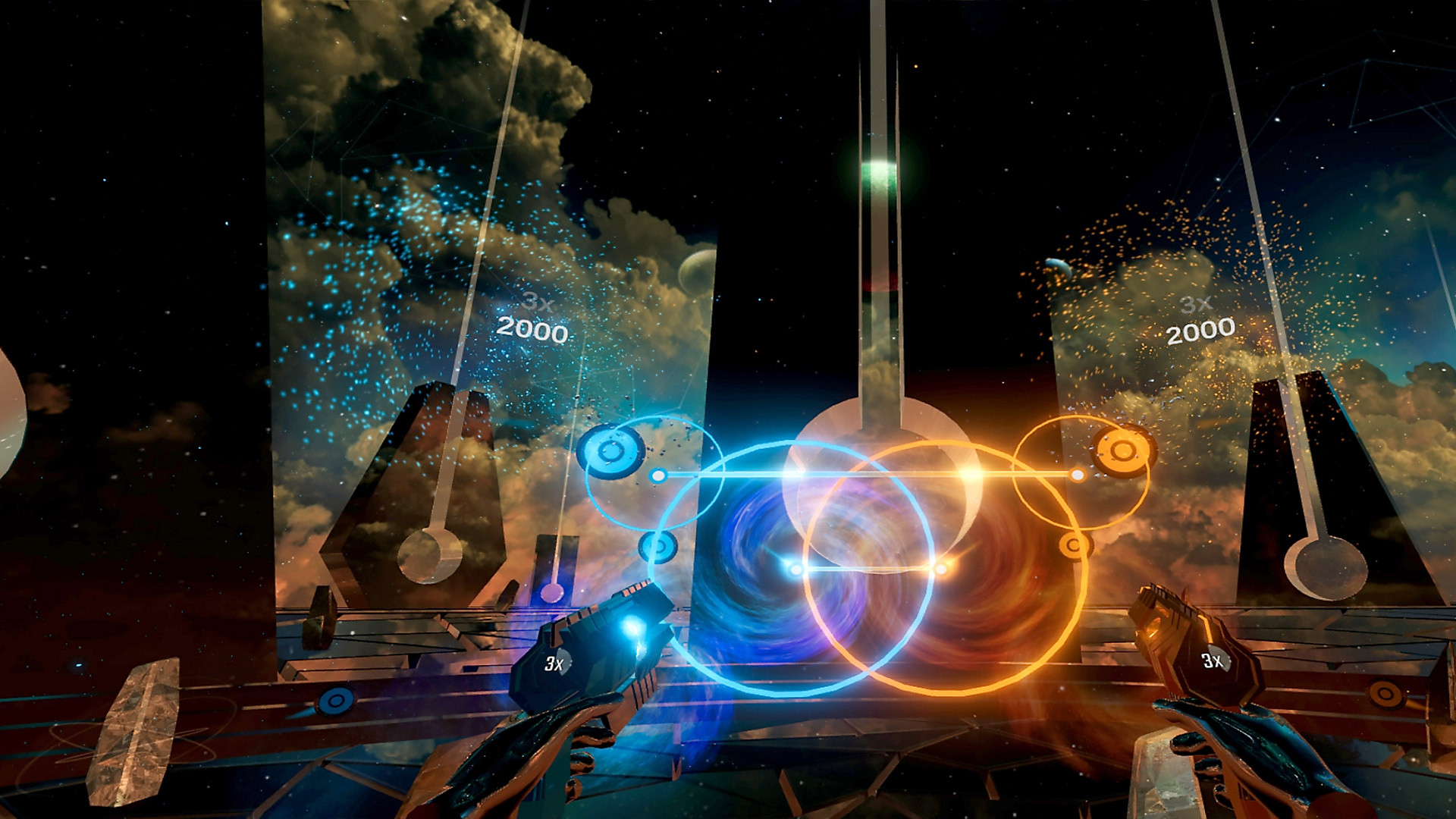 Some of my best memories are tied to Rock Band, so I had very high hopes for AUDICA when I heard about it. The game met and exceeded my expectations from the first night I played. Sitting in VR, headphones on, volume cranked up, I could feel the beat running through my veins.

It’s an experience that would slip if anything were to go wrong. If the vibration in the controllers wasn’t strong enough, if there was a lag in the music or visuals (something you can adjust for in the options!)if the mechanics didn’t mesh well with the beats, or if the music simply wasn’t fun to play. If any of these things went wrong, the whole experience would suffer.

Instead, AUDICA nails every aspect of the experience, and leverages the power of virtual reality to deliver pure chills and soaring highs. It’s a spectacle of the highest order, like attending a concert in outer space.

Ultimately, in this scenario, it’s this gamer’s opinion that the gun is indeed mightier than the sword.

A copy of AUDICA was provided to PS4 Experts for review purposes.