Dystopian settings with totalitarian governments are a great opportunity for developers to provide commentary on our current social and political climate. Beholder: Complete Edition places you in the role of a landlord newly appointed to oversee a government housing building.

In a world where privacy is an illusion and the government is always right, you must decide if you're going to be a cog in the machine or a man of the people. Should you check in, or just move out? Read on to find out!

The Precarious Balance Between Humanity and Loyalty

The opening of Beholder: Complete Edition illustrates a suitably somber tone for the rest of the game. You receive a letter notifying you of your new assignment. As a cold narrator reads the letter out loud, your family is relocated to their new home.

Meanwhile, you witness the forceful eviction of the last landlord, and you're soon told that he wasn't willing to cooperate, which is why they had to let him go.

The story moves along at a pretty fast clip once you get into your role. The game takes some time acquainting you with the controls and mechanics, but once that's finished you'll soon find yourself juggling multiple tasks at once.

The story is delivered primarily through text conversations and short cutscenes during major moments. While I was overwhelmed at first, I soon found myself relishing in the constant tasks to juggle.

I had to make some hard decisions, and in some cases, I felt like there was nothing I could do but accept the inevitable. That was when I decided to let my player 2, Christina, try the game out.

Being the wise and calculated gamer that she is, Christina soon found numerous paths and alternate outcomes that I didn't know existed. There were certain situations where I felt like the outcome could only happen a specific way.

I was proven wrong time and time again as her approach yielded new options and completely different outcomes, some of which were positive, while others were far darker.

She uncovered revelations about characters I had thought were perfectly fine in my playthrough. She also found new ways to accomplish goals that were far more streamlined than the longer, more complicated methods I employed.

The differences in our individual playthroughs showed me just how malleable Beholder: Complete Edition can be. In an industry where player choice and consequence is often boiled down to two basic decisions, Beholder offers a far-reaching web of potential outcomes.

Of course, a world like this doesn't offer many happy endings. Even when you're trying to do right by the characters, it can sometimes feel like there are no right answers to many of the problems.

It begins to wear on you during long sessions. While there is plenty of flexibility, the ultimate outcome still feels outside of your control. Whether that's a hard look at the reality of life, or the game leaning too far into its dystopian setting is hard to say.

I would have liked to see more character development for Carl and his family, as the tenants themselves have distinct personalities. The missions involving them usually boil down to spending money or buying them gifts.

If you fail to complete these objectives, the consequences are dire, and in some cases, a little excessive. While the tone of the game’s story tends to lay it on heavy, I still enjoyed the world and the numerous types of people you encounter as tenants move in and out of the building.

A Constant Stream of Difficult Decisions 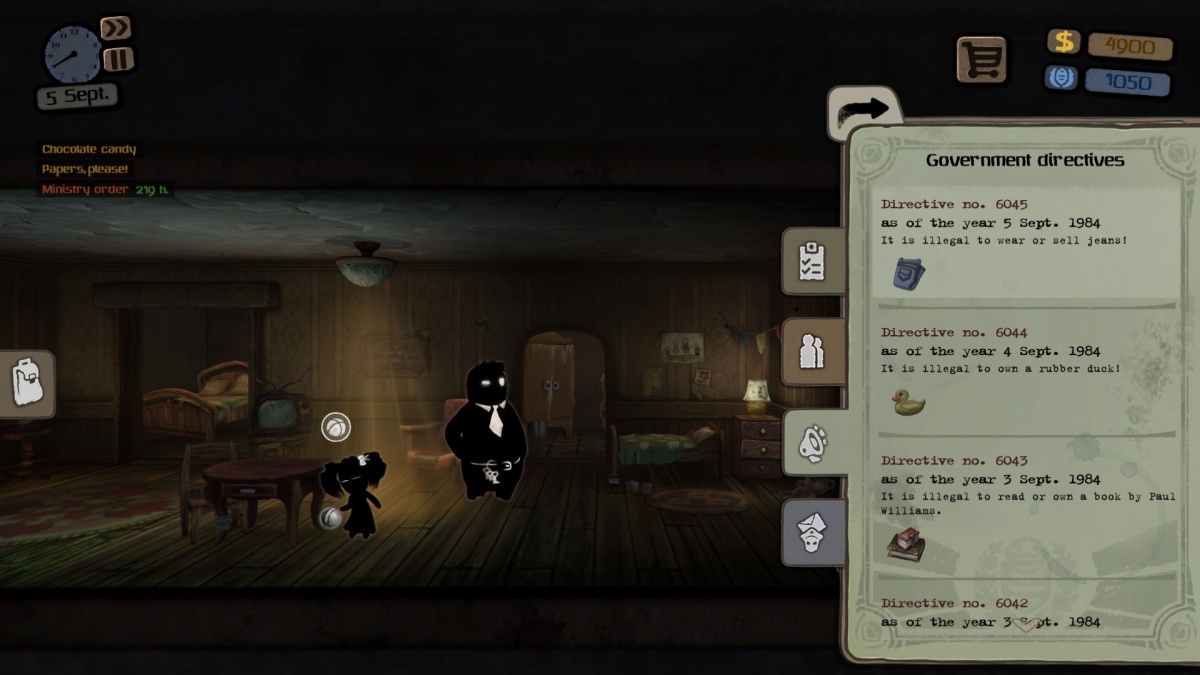 Beholder: Complete Edition is a game that requires you to stay on your toes. There are two difficulty settings to choose from, but both will offer a challenge. While the easier option does give you several distinct advantages, the higher difficulty really tightens the screws on you.

It would have been nice to have a third option that falls in between, as the gap in difficulty is substantial between your two options. The game is played using a cross-section of the building that lets you look into the various rooms as you switch between floors.

You’ll need to physically move Carl anywhere to interact with items, which causes some intense moments as you rush between floors. The game isn’t afraid to throw multiple missions at you, especially once you’ve completed the opening tasks.

Juggling between multiple objectives is where Beholder truly stands out. At one point, you may be breaking into a tenant’s room to get dirt on them, and then the phone will ring in your office downstairs.

A welcome sprint button lets you dash around as needed. The elevator instantly transports you between floors as well. To complete your objectives, you’ll need to use a combination of tactics. You have a key to all of the rooms, so you can enter whenever you like, but tenants won’t be happy if they catch you going through their stuff.

Installing cameras without their knowledge will allow you spy on them and collect intel. You can sell this information to the government, or choose to keep things to yourself. You can also take items from tenants and sell them to make money that you will most certainly need.

Exploring your options will reveal potential new paths to completing your objective, but there are times when it feels like the game is asking too much. Specifically, some objectives will require you to amass a huge sum to complete them, with little to no other options.

The missions and tenants feel unique, but there’s no denying that repetition will set in after a while. The mechanics remain largely the same between each mission, so you’ll end up doing the same general things to complete your tasks throughout the game.

As a result of the game’s repetitive nature, it can be difficult to keep interest through multiple playthroughs. Despite this, the best way to see all of your options is to play it differently each time.

Beholder: Complete Edition also includes a separate DLC story that lasts a few hours and places you in the shoes of a different character entirely. There are some different mechanics introduced here, but the experience is largely the same. 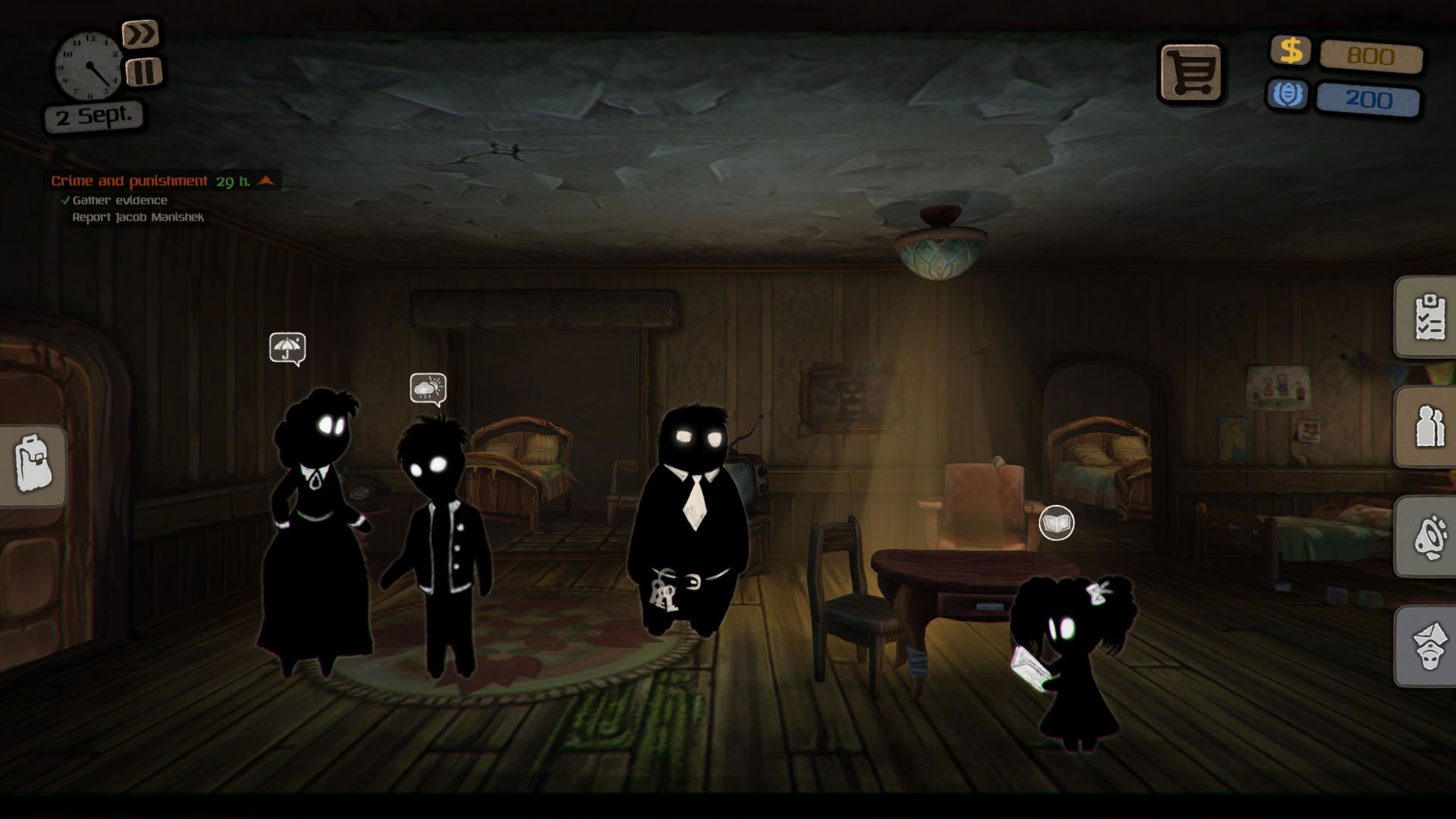 Beholder: Complete Edition is a game that feels very relevant to our modern society. While the concept of spying on tenants and reporting them to the government isn’t something we deal with, the issue of privacy most certainly is a major issue.

The grim presentation, combined with somber music, makes the game’s tone feel very heavy. The tasks and mechanics, while unique, tend to repeat themselves after a while, which can also hamper long playing sessions.

Despite these things, I would still recommend Beholder: Complete Edition. If you’re someone who enjoys a game with a range of mechanics and flexible outcomes, there’s plenty to discover here.

Just be careful not to stay too long, or you may feel a combination of repetition and depression while in the game’s grim world.

A copy of Beholder: Complete Edition was provided to PS4 Experts for review purposes. PS4 version was reviewed using a PS4 Pro