Not only does Broken Age have a story, but it has a story behind it as well. You may not know this, but today’s title was one of the first major Kickstarter gaming success stories. Ever since it was funded a few years ago, the platform has seen numerous other games get funded from good people like you and me making donations. The brilliant man/team behind this project is Tim Schafer/Double Fine Productions.

This studio is responsible for some of my favorite games of all time, but they don’t have the mainstream exposure of something like Infinity Ward, or Bungie. Even so, fans of games like Psychonauts (right here!), Brutal Legend, Stacking, and Costume Quest to name a few will know the creativity and humor that Double Fine Productions is capable of.

So, after a massively successful Kickstarter campaign, Broken Age was released in two parts on the PC, with the complete collection arriving on PS4 day and date with the release of Part 2 on the computer. Is this crowd-funded point-and-click adventure another smash hit, or does this Broken Age need to be fixed?

Sorry, I know it’s cheesy, but I had to!

A Unique Story From Two Perspectives

If there’s one thing I’ll never fault Double Fine Productions and Tim Schafer for, it’s story. These guys and gals know how to come up with some of the most unique and hilarious storylines that I’ve encountered in my time. It was Psychonauts for example that really drove me to be a writer and to find more games like it (still looking!).

Broken Age keeps up this legacy of great storytelling with a tale that is played from two vastly different perspectives. One of the playable characters is Shay who is a young man traveling through space on a ship that is run by “MOM” which is a computer A.I that treats him like he’s five. 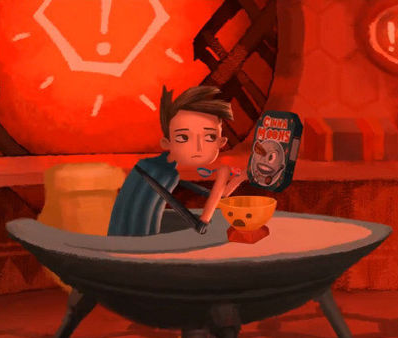 The other perspective is told from Vella who is a young woman in a small village known for their baked goods. She is one of several girls in her village who was chosen to be sacrificed to a monster named Mog Chothra but she’s not so willing to accept her fate. You can switch between the two characters at any time and progress their stories, though there will be times when you need to stop one story to catch up on another. 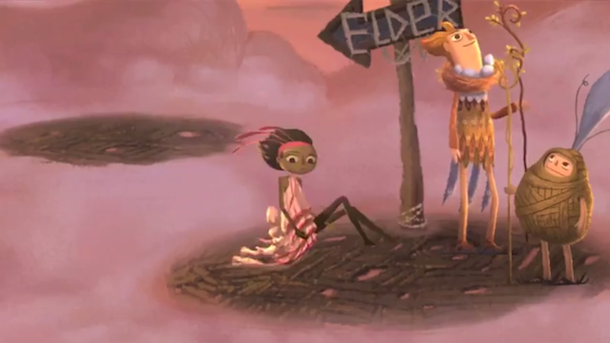 Everything unfolds through cutscenes and dialogue choices that you make when conversing with other characters. The writing is sharp and witty, something I’ve always come to expect from the team at Double Fine. The stories eventually intertwine as I’m sure you’ve guessed and I for one thought the inevitable reveal of everything was much deeper and more intense than I could have guessed. Some people may scoff at the explanation, but I found it to be shocking and interesting. It also leaves a nice final act for everything to reach its conclusion. The whole affair is linear and will take you roughly eight hours to finish. I don’t want to say any more about the story in order to avoid spoilers, but suffice to say, fans of Double Fine will see all of the classic humor and wit here.

Broken Age is a point-and-click adventure in the vein of the classics like Grim Fandango, Day of the Tentacle, and Monkey Island. The PS4’s interface works perfectly fine with control of the curse being relegated to the left stick and the X button being the method of selecting, interacting, and walking to things.

The Triangle button brings up your inventory, and the rest is just exploration and puzzles. As I mentioned earlier, the PC version of the game was released in two parts so those players had to wait for several months at the halfway point in the game to see the second chunk. Knowing where this cutoff is, I decided to look at the differences in the two sections.

In the first half of the game, both Vella and Shay experience a wide variety of scenarios and events in a wealth of different and unique locations. The puzzles aren’t very difficult, but I found them to be entertaining. Honestly, it was the second half of the game that I didn’t like as much. My biggest gripes come from two things:

The jump in puzzle difficulty is seen immediately after the halfway point, and while I welcome a good puzzle, some of these were just plain frustrating. An element of timing was introduced, requiring perfect interaction with certain elements, or you would be forced to watch a scene of you failing and then try again.

To compound these issues, a couple puzzles near the end of the game required you to backtrack a moderate distance just to reset them. One puzzle had a warp option (which I appreciated) but the others required me to trek back in order to reset them. Let’s just say I had to rage quit a few times.

I wish the puzzles had ramped up a little more slowly in difficulty instead of spiking suddenly halfway through. There are some duds, but some of the puzzles were really interesting. I just wish the travel time wasn’t so arduous.

Another thing Double Fine Productions is known for is their command of art styles in gaming. Broken Age has a unique pastel sort of look with bright colors and zany characters. I personally loved it as it reminded me of Psychonauts in some respects. The voice acting is spot on, with some notable performances from the main characters and some interesting side characters that you probably won’t see coming.

In the end, you would be hard-pressed to find another game that looks like this one, and I can almost guarantee you won’t find one with a similar storyline. The gameplay is classic, but not for everyone, and you should be forewarned that the puzzles in the second half will give you the same rage fueled frustration as a boss in Bloodborne.

Well, maybe not that bad, but with puzzles being the core of the game, I wish they had been better laid out and designed with a more consistent learning curve. Still, fans of point-and-click adventures and Double Fine Productions should check this one out for sure. Everyone else, well, I think the review should give you an idea whether or not this is right for you.