When ChromaGun first released on the PS4, it was a solid and unique take on the first-person puzzle game genre. A VR option made a lot of sense, and the developers have spent a lot of time making that a reality. Now, several years later, ChromaGun VR is here for PSVR.

Does the transition to virtual reality make this game better than it was before, or is it still struggling to find its true colors?

A Better Version in (Almost) Every Way

ChromaGun has a pretty simple premise: you’re a test subject in a facility called ChromaTech. Your goal is to solve (and survive) a series of puzzles using their new ChromaGun which fires various colors of paint.

The story still takes a backseat here, but I stand by my original assessment that the narrator and humor are both great. The snarky tone of the narrator pairs perfectly with the writing, which is delightfully tongue-in-cheek.

Signs above the entrance to each level also offer helpful and funny advice that I enjoyed. So, despite the story still being a missed opportunity to leverage the tone and writing, VR does add a lot to ChromaGun in terms of gameplay.

I jumped right into ChromaGun VR with the Aim controller and it felt as natural as could be. Once you pick up the gun for the first time, your Aim controller transforms into a virtual version of the weapon, scuffs and all.

The tracking is absolutely superb, with options for click turning or smooth turning, along with smooth movement. I will say that the smooth turning has a bit of a judder to it that can be nauseating, but if it bothers you the click turning is a good solution. It’s also something that may be patched out later.

Switching between colors on the Aim controller is as simple as using the face buttons on the back of the gun beside the analog stick. The controls overall felt really natural and easy to use, which is why playing with the Aim is absolutely my preferred method.

The puzzles once again combine the unique mechanic of firing and mixing paint. By using combinations of red, yellow, and blue, you’ll be able to solve puzzles involving floating worker droids.

These start out friendly enough, but soon they will become fatal if they hit you too many times. Thankfully in many cases you can paint them and they will be attracted to walls of the same color. The use of these color mechanics makes the puzzles feel fresh and unique to ChromaGun VR.

Between the smart puzzles and the excellent tracking, ChromaGun VR is by far the superior way to play the game, but there is a bundle on the PSN store that offers both games if you want the option to play on the TV.

One minor gripe I have with the design in ChromaGun VR is the way it’s possible to essentially fail a puzzle without getting a game over. An example would be firing the wrong colors at a worker droid and essentially turning it black from mixing too many colors.

At this point no other color will do anything, so you have no chance of finishing the puzzle. Your only option is to pause and reset. If there was a way to override the colors or reset them with the gun back to white, this would have been a better solution that letting players paint themselves into a no-win scenario. 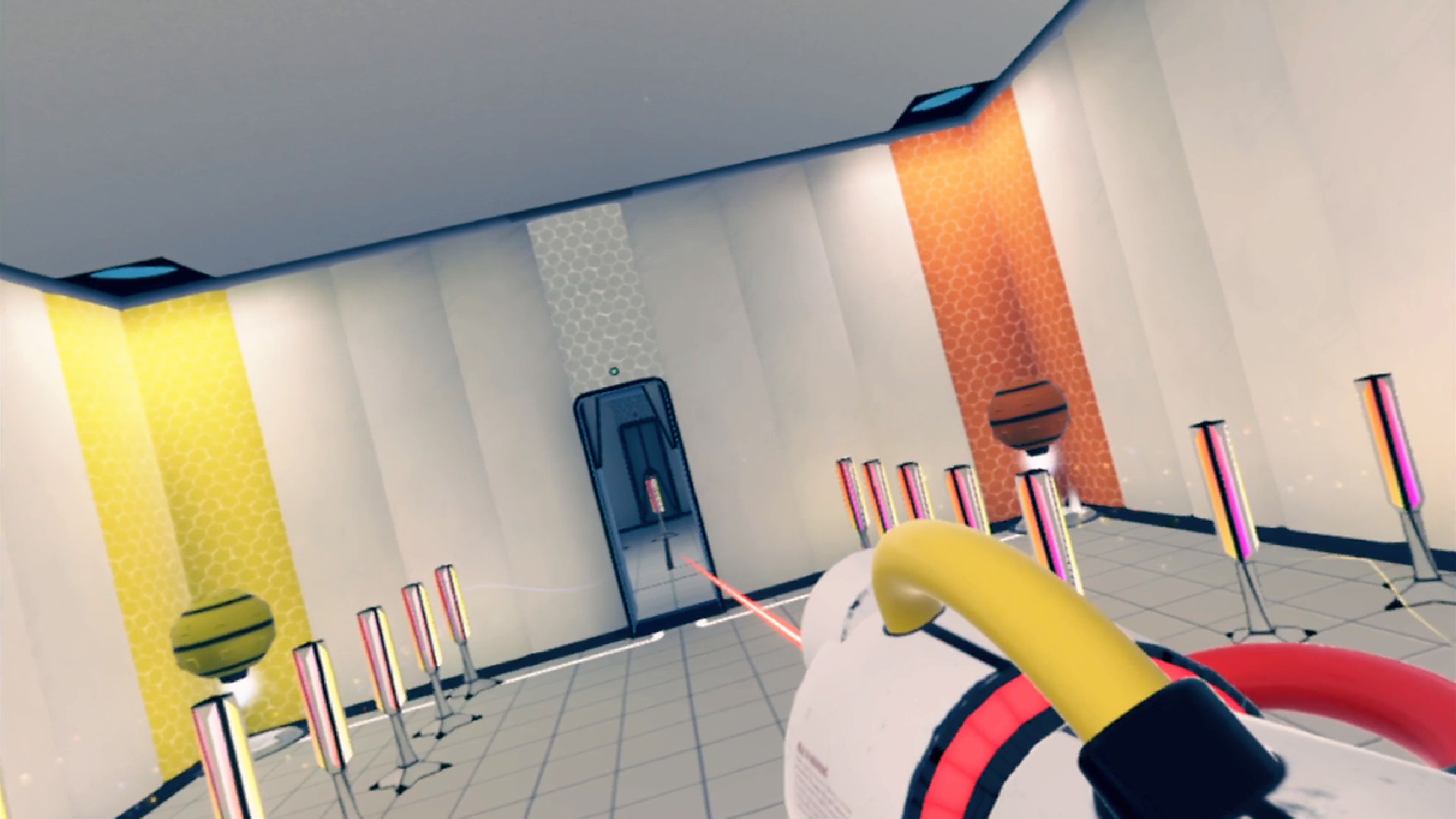 Having read some of the technical information on the obstacles the developers faced getting ChromaGun VR to run well on PSVR, I have to say they did an excellent job of bringing the experience over.

While the environments are pretty simple and similar, the sense of space and movement in VR really helps the puzzles feel engaging. Graphically, it also looks great by VR standards. The little touches like scuffs on the gun really help sell the immersion.

I know the team took special care to map the Chromagun’s model to the Aim controller and it really paid off. The tracking is 1-to-1 which really made me feel like I was holding the game’s iconic gun in my hands.

Puzzle fans looking for a new hook should absolutely check out ChromaGun VR. If you have an Aim controller, there’s really no excuse not to check it out. It may not be the most difficult puzzle game, but it’s unique, polished, and performs very well in VR.