With a name like Danganronpa, it's hard to know what players should expect going into this horror visual novel/murder mystery title. Originally released on the PS Vita, the first two games in this series have finally made their way to the PS4 with the release of Danganronpa 1+2 Reload.

Does this murder mystery full of twisted killers and high stakes trials capture your heart, or does it rip it out and leave you in utter despair? It's time to find out!

Headmaster Monokuma Says It's Kill or Be Killed

Danganronpa wears a lot of hats throughout its story. The first game begins with a great opportunity for the main character. You've been invited to Hope's Peak Academy, a school where only the most talented students are given entry.

Known as "ultimates," these students represent the highest members of their chosen field. Whether it's the "Ultimate Baseball Player" or the "Ultimate Gambler," Danganronpa's characters cover a wide range of different personalities and talents.

Our main character, Makoto Naegi, was chosen at random, and is thus known as the "ultimate lucky student." Anyone who attends Hope's Peak is practically guaranteed success in life, so this must be a good thing...right?

Well, Danganronpa quickly becomes something else entirely when you arrive at the school. Makoto and the other students soon find out that they are being held captive within the school's walls by a fiendish bear named Monokuma.

The titular bear wears a smile that's half nice and half sinister. He chuckles like a teddy bear at the same time that he declares the rules of his twisted game. As a villain, he ranks up there with the most terrifying horror characters I've seen in gaming.

Break his rules and he'll execute you without a second thought. His game is one that demands bloodshed, which sets up the premise for the rest of the game.

You, and your fellow students, are trapped in this school for the rest of your lives unless you manage to graduate. To graduate, you must kill another student and get away with it.

When a murder occurs, Monokuma gives you time to investigate and find clues with your fellow students. Once this is done, the class trial begins.

Class trials are an amazing combination of seemingly different gameplay elements that we'll discuss in the next section of the review. In terms of story, they offer the chance for the students to find and accuse the murder. If they succeed, the murderer is executed in a delightfully ironic fashion by Monokuma, and the game continues.

If they fail, the murderer graduates and everyone else is killed. The stakes are high, and these trials are always incredibly intense sessions that add even more twists and turns to the plot. You'll go in thinking it's gotta be one person, only to find that the clues point to someone else.

I can't say more than that without spoiling things, but throughout the first and second game, these trials provide a massive highlight that truly makes this series stand out from every other visual novel on the market.

Yeah, that's just the premise. While these characters don't seem like murders, Monokuma finds fiendish ways to push people to their limits. Whether it's psychological torture or the promise of a reward, he manipulates the cast to turn on each other whenever possible.

Danganronpa, being a visual novel, is primarily focused on story. While some of the lines are supported with voice acting during major scenes or class trials, the vast majority of your time is spent reading text descriptions and dialogue.

Thankfully, the story in Danganronpa 1 and 2 are both exceptional examples of how to make the murder mystery genre feel fresh again. The twisted game that Monokuma has created, combined with the near-constant twists and turns in the story and the exquisitely developed characters, all combines to create a phenomenal experience.

Everyone feels unique, which is amazing given the sheer number of students the game starts with. You have the option, during free time, to speak with them and get to know them better. This earns you new skills to use in the class trials and offers more backstory.

Of course, this all makes it more shocking when one of your favorite characters turns up dead in some gruesome manner. The story in both the first and second game is nothing short of amazing. It kept me glued to my couch for hours on end. While it's true that a lot of time will be spent clicking on characters or objects and reading text or dialogue, Danganronpa offers freeform navigation (that's improved greatly in the second game), investigative gameplay, and of course, the class trials.

Visual novel players will feel right at home, but even more antsy players will find that the investigation and class trial gameplay makes it worth playing.

Investigations play out through a similar method of pointing and clicking, but hunting for clues can be an exhilarating feeling, especially knowing that the next class trial is just around the corner.

The clues you find become "truth bullets" as you enter the trial. Each class trial plays out a little differently, but certain elements will be present throughout each one. Using your truth bullets, you'll experience nonstop debates where characters discuss elements of the case.

As they speak, you'll see their dialogue fly across the screen. To succeed, you must use your truth bullets to shoot down any elements of their argument that are false.

Here's an example that I just made up, so no spoilers: let's say the victim was killed by a hammer, but one of the characters talks about how they were stabbed. You would load a truth bullet for the murder weapon and shoot down their comment about someone being stabbed, thus refuting their claim.

That's just one element. Other stages of the class trials include a rhythm minigame where you shoot down someone's claims against your evidence, and an interactive manga where you piece together the events of the murder. 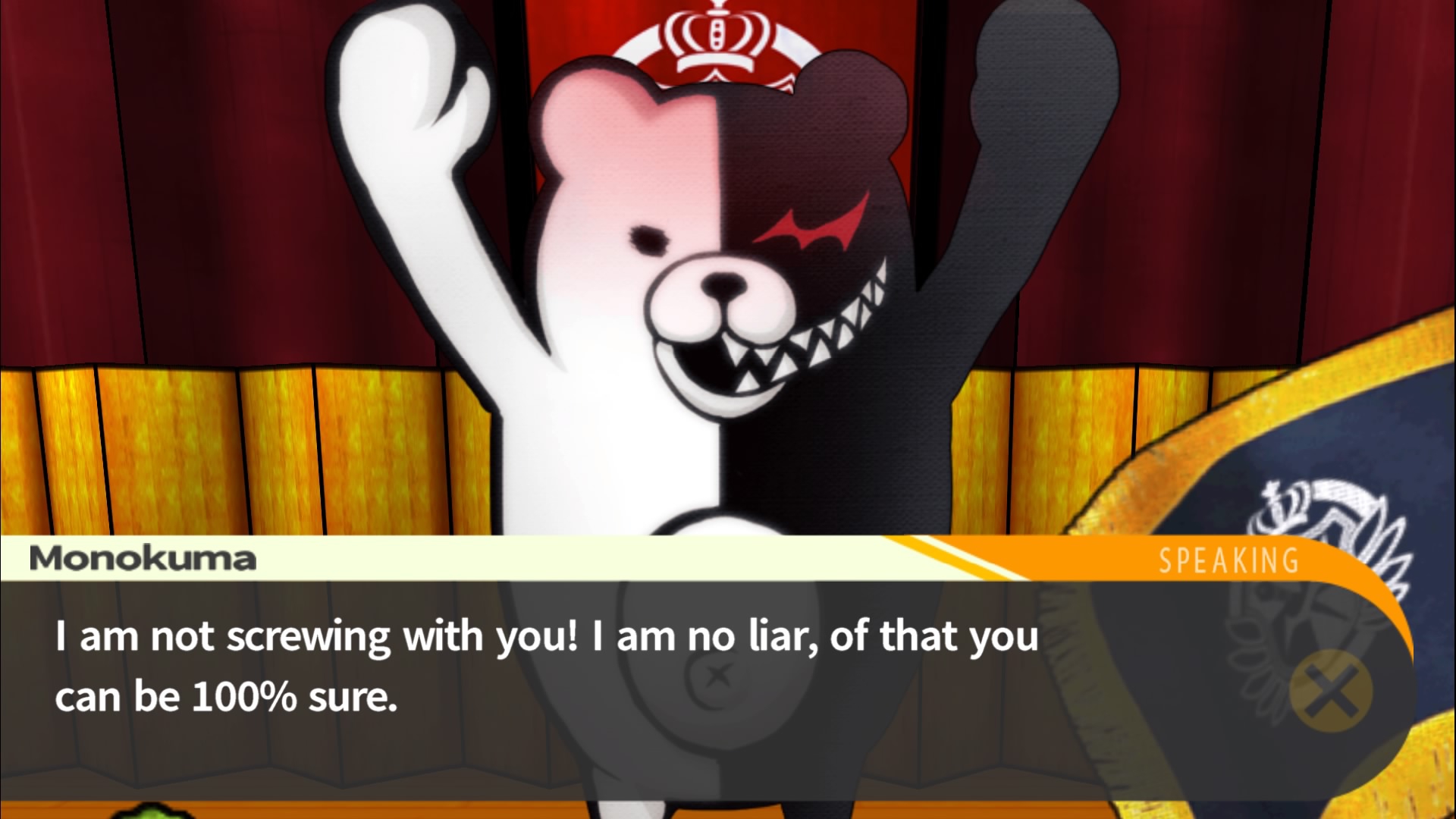 Depending on your difficulty setting of choice, the game will also add additional elements that ramp up the difficulty. In later cases, you'll also be required to absorb other arguments as truth bullet and shoot them back to make your case.

The game explains these additional elements regardless of your difficulty and then tells you to forget about it if you're on easy. This can be confusing for players who actually are on easy, but it's not too much of an issue.

Prior to each class trial, you'll also be able to equip skills you earned by getting to know your classmates. To obtain these skills, you use collectible coins you earn or find while exploring to randomly get presents at a shop in the game.

When you give characters presents they like during your free time, you'll unlock new skills to make the class trials a little easier. This is true of the sequel as well, but the coins are much easier to come by in the second game. In the first, they are hidden in random interactions with the environment.

While class trials can easily be overwhelming for new players, you'll quickly find your footing and enjoy the adrenaline rush of nonstop debates and ultimately uncovering the culprits behind the game's gruesome murders.

Before we finish our review, I'd like to take a moment to mention the FREE VR experience you can download if you played and enjoyed these games. Yes, that's right, it's free.

PlayStation VR owners who download this class trial can experience one of the later trials in the first Danganronpa game with the added benefit of being immersed in the intensity of a class trial.

While the characters in the main games are 2D, this VR experience renders them in glorious 3D with the power of Unreal Engine 4. During the trial, you'll have to turn your head and fire off truth bullets to make it to the end.

At the end of the trial, you'll even get the unique opportunity to experience one of Monokuma's signature executions in terrifying first-person! It does spoil a trial from the first game if you haven't seen it yet, but fans new and old should absolutely download and experience this awesome VR class trial.

At the very least, it can give you a taste of the class trial experience if you're on the fence. I highly recommend it.

Danganronpa 1+2 Reload uses a mixture of 2D characters and 3D environments. The characters themselves are incredibly detailed renditions, while the environments are simple affairs that cleanly portray each area.

During conversations, characters will shout signature lines if they dialogue isn't fully voiced, and strike awesome poses that add a lot of emotion to the dialogue.

There are fully animated scenes for specific events, and while these often potray some frightening moments, they look slightly blurry in comparison to the sharp 1080p graphics that the game showcases the majority of the time.

It's not enough to be a real issue, but it's worth mentioning. Another thing I really enjoyed was the size of the text in the game. In a title with so much reading, small text could easily have been an issue.

I'm pleased to report that the text here is a bright white and plenty large to comfortably read from your couch. Never once did I have to squint or sit closer to keep up with the game's text. A small, but very important detail.

There are some truly standout visual novels gamers can play in today's modern gaming world, but Danganronpa 1+2 Reload is easily one of my favorite ones.

With a horrific story that twists and turns while never taking itself too seriously, amazing gameplay in the class trials, and a sleek presentation, I cannot recommend this game enough. There's tons of gameplay between the first and second game, giving you a huge bang for your buck.

If you're even remotely interested in the idea, dive in. He may look like a teddy bear, but Monokuma's got teeth and his game of murder and deception will stay with you long after you've finished. With the third game coming to PS4 in September, now's the time to get caught up.

As it turns out, despair is pretty awesome.