The Danganronpa series is one that more people need to play. In an industry full of shooters and cookie-cutter RPGs, this series comes stomping in with a robotic bear, incredible murder mysteries, and unique gameplay.

While I've always been a fan of this series, I went into the newest entry with high expectations. The quality has always been there, but I've always felt there something missing that would make it perfect. Does Danganronpa V3: Killing Harmony reach the pinnacle of the series, or should it be labeled the blackened and subjected to Monokuma's unique form of punishment?

A New Killing Game Has Begun

The First Danganronpa set a strong precedent for the rest of the series. The second game in the main series refined much of the mechanics and added some clever new ones. The spin-off was a fresh new take on the world, and now we have V3 that brings us back to basics.

Much like the first two games in the series, Danganronpa V3: Killing Harmony is a mixture between a visual novel, an investigative murder mystery, and an intense battle of wits to expose the killer.

It's a formula that worked incredibly well in the first two games, but at this point, we know what to expect from the premise. Sixteen people, all of whom are the age of high school students, find themselves trapped in a strange place with no knowledge of how they got there.

They're soon introduced to a robotic bear named Monokuma who relishes in despair. The strength of the Danganronpa series has always rested on the shoulders of its excellent characters and the sharp writing that never leaves any room for plot holes.

Danganronpa V3 returns with excellent writing and perhaps my favorite cast of characters to date. As per the usual setup, each of the characters are known as "Ultimates." They have been branded by society as masters in their individual crafts.

From the Ultimate Anthropologist to the Ultimate Cosplayer, the cast in Danganronpa V3: Killing Harmony is easily the most unique and interesting bunch that have graced the series thus far.

With prior characters filling roles like the Ultimate Fanfic Writer and the Ultimate Breeder, it's impressive that they've managed to make yet another cast feel fresh and new.

I'm staying intentional vague here because Danganronpa V3's story is absolutely amazing and I don't want to give anything away here. I will say this: I've always felt that the series did a lot of amazing things with its storytelling, but it also seemed to be missing something.

Past Danganronpa games have made me laugh, made my jaw drop through shocking reveals, and tested the limits of my ability to follow the complex logic. I always had my favorite characters, but I never felt attached from an emotional perspective.

I was certainly sad to see her characters go and angry at the culprits who ended them, but it was never a gut-wrenching feeling. All of that changed with Danganronpa V3.

As I said, the writing has always been great, but this new entry makes a strong and concerted effort from the beginning to really make these characters feel like real people. More than that, it develops complex relationships between them in a way that only the finest creative works can accomplish.

It's still funny, still shocking, still intense and quirky as ever, but with this third entry, the series has finally added that missing piece. It's all of those things, but now it forces you to emotionally invest yourself in its characters.

It also helps that the newest entry has cut out much of the fluff in the writing. Prior games dragged on in certain situations, which could hurt the pacing. This newest title keeps the story moving and the dialogue focused.

It still suffers from a little slowdown in the middle of the game where it starts to feel like routine, but that just highlights the incredible opening and closing chapters that bookend the experience.

The perfect story in a video game, for me, involves touching upon emotions that span the spectrum of how creative works can affect a person. The perfect story keeps me captivated, makes me laugh, shocks and awes me, and most importantly, makes me feel something real and tangible.

Danganronpa V3: Killing Harmony is an example of a perfect story within its genre. Within the series, it stands tall as my absolute favorite in terms of the narrative. Monokuma dug his hooks into me and never let me go.

Now, let's see if the gameplay has been fine-tuned to this level of perfection.

Observe, Investigate, Then Put Everything on the Line 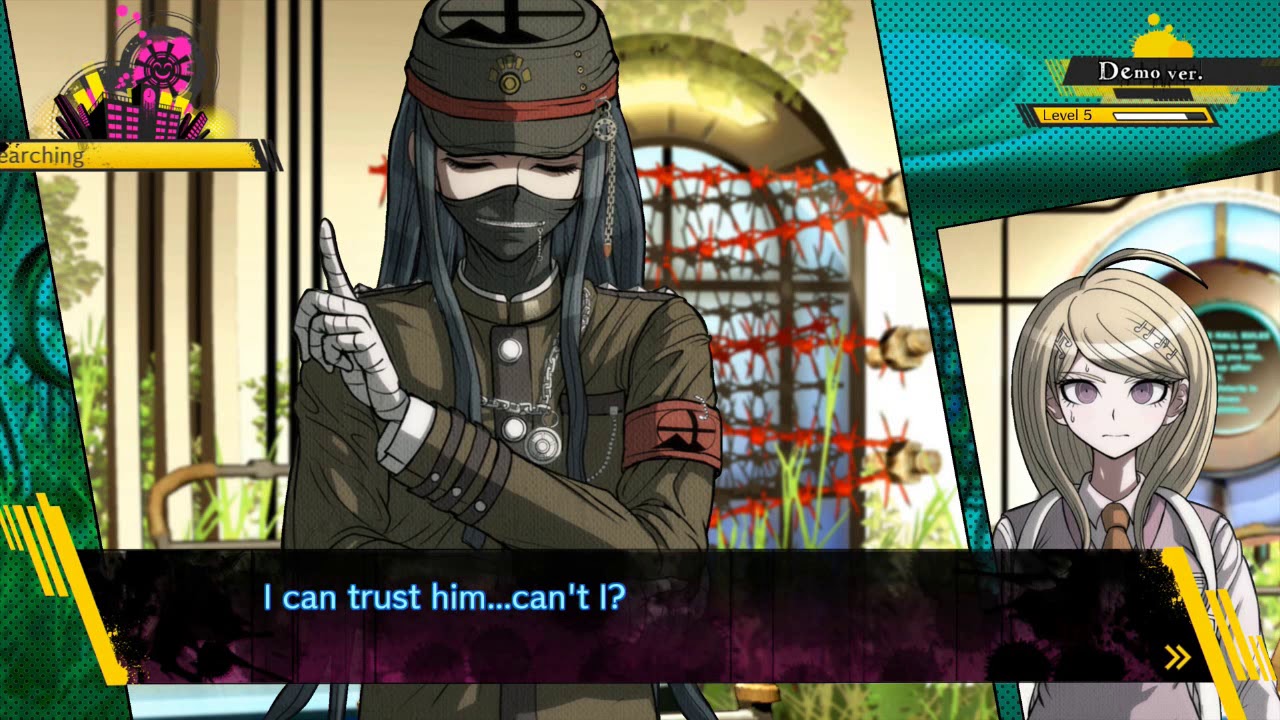 The core gameplay loop of Danganronpa has been tightened and polished to a mirror sheen in this latest entry. You'll spend time conversing with characters, finding collectibles and generally progressing the story to start.

When a murder finally happens, the game switches to a Deadly Life mode where you must investigate all the potential clues and suspects to formulate a case against the murderer (known as the Blackened).

When you've seen everything and gathered the proper clues, you'll then be summoned to a Class Trial. These intense and extensive experiences are the core of what makes Danganronpa unique from all other games in the genre.

In the past, numerous mechanics have been employed during these trials to simulate heated debates, long strings of thought processes, and reenactments of the crime to reveal the killer.

In Danganronpa V3: Killing Harmony, the developers have found a way to incorporate mechanics from previous games while also adding new ones to create the most cohesive and engaging form of Class Trials to date.

With multiple difficulty settings, you'll also have your limits pushed in both your ability to interpret logic and your reflexes in intense situations.

The classic mechanic of shooting "Truth Bullets" to refute arguments makes a triumphant return, but with several twists. Not only will you need to agree with true statements like in Danganronpa 2, but you'll also need to purposefully lie in pursuit of the ultimate truth.

Sprinkle in filler text that must be shot down with a silencer to expose a clear shot at the text you're trying to hit, and you have the most complex and cohesive form of this mechanic I've seen.

Other mechanics like split debates between two opposing sides of the trial, an improved Hangman's Gambit to illustrate an epitome, and an excellent form of the finale where you recreate the murder all contribute to the action that keeps you on the edge of your seat.

Just when you think you're closing in on the killer, a new clue with upset the entire opinion. Red herrings abound during this trials, so it will never be easy to simply guess the killer.

Make no mistake, these trials will not fly by either. You'll easily spend several hours in some of these. Thankfully, the game lets you save consistently so you don't need to devote an entire afternoon to a Class Trial (unless you want to, and you probably will).

Between trials, you'll also have free time where you can engage with characters and give them gifts. These are purchased with Monocoins that you can find by smashing and pushing objects in the environment.

It's easily the most satisfying way to gather these coins that I've seen in the series. Furthermore, the interactions you have with characters as you grow closer to them are more meaningful than ever.

When I look back on this series from a gameplay perspective, I see a strong foundation in the first title that created an iconic gameplay loop that no other title has achieved in its sheer addictive nature.

The second game polished these gameplay mechanics and added new ones to keep the experience fresh. Now, with Danganronpa V3: Killing Harmony, the gameplay has been elevated once again to the absolute peak of its potential. I cannot think of any way to improve these mechanics further. 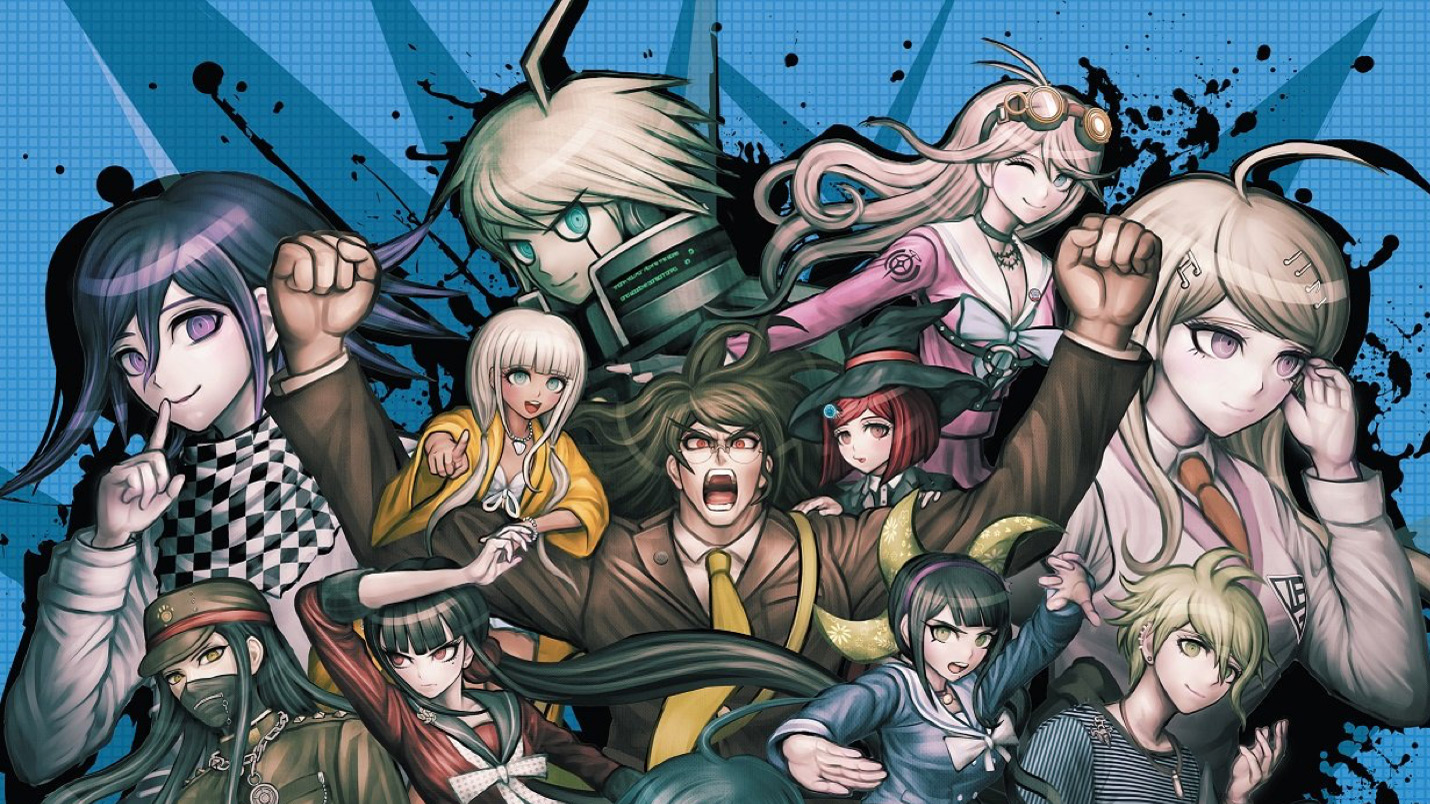 The characters and environments of Danganronpa have always been at odds with each other. In the previous games, the characters were always detailed portraits with expressive poses that heightened their dialogue.

Meanwhile, the environments ranged from detailed and interesting, to bare and undecorated. With Danganronpa V3: Killing Harmony, there's a much stronger balance. The characters look better than ever, with simply incredible art on display and wonderful poses for different emotions.

The dilapidated halls and overgrown exterior are much more interesting to explore this time around. I've always played the game with the English voice acting, and I have to say that the actors and actresses this time around are my absolute favorite.

It's a small detail, but I've always appreciated the large text the series uses as well//. I have trouble reading small text on a 60-inch TV from my couch, but Danganronpa has always been a pleasure to experience as the text size and font is really easy to read from a distance.

I think we all know where this going. When I review games, I always hold back from awarding a perfect score because very few games are worthy of such an accolade.

Danganronpa V3: Killing Harmony is, for me, the perfect video game. Its story had me on the edge of my seat, laughing, and moved to tears in equal measure. Its signature gameplay wowed me with polished mechanics and its stunning presentation did it all style.

This series has always been a standout in the genre, but with this entry, it has set a new bar higher than ever. It confirms, more than ever, that Monokuma is truly my spirit animal.

A copy of Danganronpa V3: Killing Harmony was provided to PS4 Experts for review purposes