When I first saw de Blob, it was back when the game released on the Wii. It looked like a great fit for the system, but I never got the chance to try it out. Now that it has been polished and released on PS4, I decided it was time to see what this color-based platformer was all about.

In de Blob, you fight against the I.N.K.T. Corporation, who has invaded Chroma City and banned all things color. Does this vibrant adventure provide a satisfying experience, or is this beauty only skin deep?

The premise of de Blob is set up through cutscenes that seem to play in a lower resolution than the game itself. This resulted in a less than ideal experience on a 60-inch television.

Even so, the cutscenes in the game feature characters who communicate in noises and gestures as opposed to standard dialogue. The I.N.K.T. Corporation comes in and takes over Chroma City.

They drain all the color until everything is black and white. They enslave the citizens to work for them and quickly gain an iron foothold on the city and its people.

As the titular blob, you are part of a resistance seeking to restore color to the city. While there are some cutscenes between levels, the story doesn't do much else with this premise. As a kid-friendly game, it sticks more to the gameplay and less about the oppressors that have taken over the city.

Despite the surface-level story, I like the premise, and it provides a great backdrop for the game's levels and activities.

Paint the Town Red...or Any Color You Want

The gameplay in de Blob consists of large open levels where you must earn points to unlock new areas and progress. One thing I didn't like, was the lack of mid-level saving. If you drop out of a level without completing it, you must start from the beginning.

This would be fine if the levels were short, but to do everything, paint as much of the level of possible, and complete all the challenges can easily take upwards of 45 minutes or even an hour on later levels.

The option to save midway through the level is sorely missed when you just want to play a little and move on to something else. Every time I booted up de Blob, I had to clear my schedule for at least one entire level, or I would lose all my progress.

Fortunately, the gameplay is pretty fun. You can attack or otherwise run over drones carrying color to paint yourself and gain color points. By coming into contact with buildings, people, trees, or other objects, you spend paint points to paint them that color.

When you reach specific point thresholds, you can trigger devices that fully color a certain area as well. As you make your way through the game's large areas, you'll find challenges spread throughout that earn you large sums of points towards your goal.

These range from painting challenges to races, to combat scenarios, and story-specific objectives as well. The challenges quickly ramp up in their difficulty but are never incredibly hard to complete.

When it comes time to make yourself specific colors, you will need to mix them together. You can find drones that carry the three primary colors: red, yellow, and blue. By turning yourself red and then hitting a yellow drone, you can become orange.

Yellow and blue make green, blue and red make purple, and so on. You'll need to mix up your colors for specific challenges based on their requirements.

The satisfaction of bringing color back to the world is undeniable in de Blob, and the challenges themselves are engaging for the most part. Some of the races can be frustrating, and this ties back to the game's controls.

You move around with a kind of amorphous movement, and not very quickly. Jumping is awkward as you don't leap very high, and you'll stick to the sides of buildings or jump off walls in the wrong direction if you're not careful.

This extends to the combat as well, which amounts to targeting and leaping onto enemies. It works fine, but targeting specific enemies in a crowd is almost impossible. I just quickly leapt from one to the next.

If you do end up getting hit or falling into the black ink, you'll need to find a source of water to wash yourself off before you die and lose a life. Water sources are sometimes pretty far from combat, so in many cases getting hit was a death sentence for me. It didn't happen very often, but when it did it was annoying that I couldn't feasibly reach a water source in time.

The controls never feel very responsive or accurate, which can be frustrating more often than not. You do feel like a blob, but for all the wrong reasons.

This, combined with a camera that can wildly spin around you during platforming sequences, really made de Blob more difficult than it needed to be in a lot of situations.

The game does have some bonus modes and local multiplayer as well, so the amount of content available for the price is just right.

Bright and Vibrant Presentation With a Stylish Soundtrack 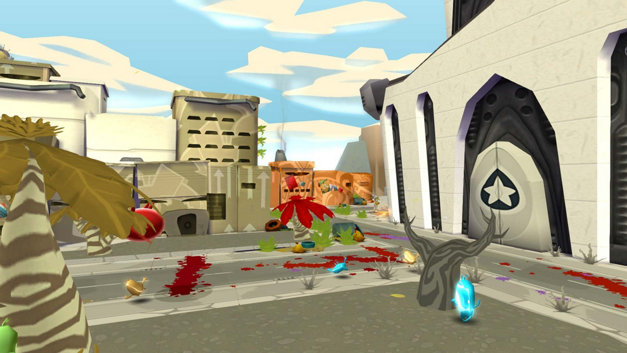 The contrast between de Blob's wide range of colors, and the dreary black and white sections of the city is excellent from a visual standpoint. The ability to paint everything in just about any color you wish is very fun and quickly results in some extremely vibrant landscapes.

The soundtrack was a high point for me, with energetic and upbeat music during each of the game's levels. Depending on your chosen mood, the music that played when you painted things was also different. I really enjoyed the jazzy saxophone rifts that played as I plastered a street of buildings bright colors.

Despite some frustrating controls and camera issues, along with a very sparse save mechanic, I enjoyed my time with de Blob. If these things were tightened up in the sequel, I would love to see it come to PS4 as well.

In the meantime, if you're looking for a little color in your life, or a new game to play with the kids, de Blob is a solid choice.

A copy of de Blob was provided to PS4 Experts for review purposes. Version was tested and reviewed on a PS4 Pro