If you’ve ever been in a long distance relationship, then you know how it feels to be apart from someone you care about. Having access to technology allows us to see and hear each other, but we’re always separated by a barrier of distance.

With this in mind, I dove into Degrees of Separation on PS4. Thankfully my Player 2, Christina, lives with me, so we were able to enjoy this co-op puzzle game together. With beautiful art, plenty of puzzles, and a intriguing narrative, does this game about two people in opposite worlds set your expectations ablaze, or does cold reality eventually settle into your experience?

Degrees of Separation allows you to play single player or local co-op as two characters: Rime and Ember. Rime’s kingdom is filled with ice and harsh winds, while Ember’s is warm and lush. The two can see each other, but they cannot touch as a barrier separates them at all times.

The story here, penned by Chris Avellone, has a charming and wholesome feel not unlike a fairy tale. The narrator also delivers a calm, warm, and inviting delivery of each line that really helped sell the world and atmosphere.

It’s not the most complex story, but it does interject regularly to offer backstory and insight into the characters who remain silent throughout the adventure. It also offers detail for the environments, which convey their own sense of mystery.

I primarily played Degrees of Separation in local co-op, but I did sample the single player experience. While it’s completely functional and offers some quality of life mechanics like the ability to call the other character over, it’s not the ideal way to experience this game.

I vastly preferred the local co-op as it encouraged discussion about how to approach each puzzle. With a large and non-linear collection of worlds to explore, with The Castle as the hub, there are plenty of brainteasers to be had.

They range from simple solutions that become second nature once you become accustomed to the interplay between heat and cold, to far more complex puzzles that require planning and careful implementation.

From a difficulty standpoint, Degrees of Separation felt right on the mark for me. The reward for each puzzle’s completion is a piece of fabric referred to as “Scarves.” Since the world is non-linear, you can freely walk by puzzles that frustrate you and return later. Of course, that was difficult when playing with a completionist, so your mileage may vary.

There’s also a convenient fast-travel system of sorts that allows you to interact with any of the signpost checkpoints and travel quickly between the ones you’ve unlocked. New worlds introduce additional mechanics as well, such as the ability to make the barrier between Rime and Ember solid so you can walk on it.

Even with these additional mechanics, however, repetition sets in pretty regularly. Perhaps other objectives beyond collecting scarves could have helped with this, or simply more variety in the puzzles themselves. They are certainly numerous and indeed clever, but they do tend to feel a little samey after several hours.

Even with this minor flaws, however, Degrees of Separation is a very strong puzzle game, and with far too little local co-op titles on the PS4, it’s a welcome addition to my library. 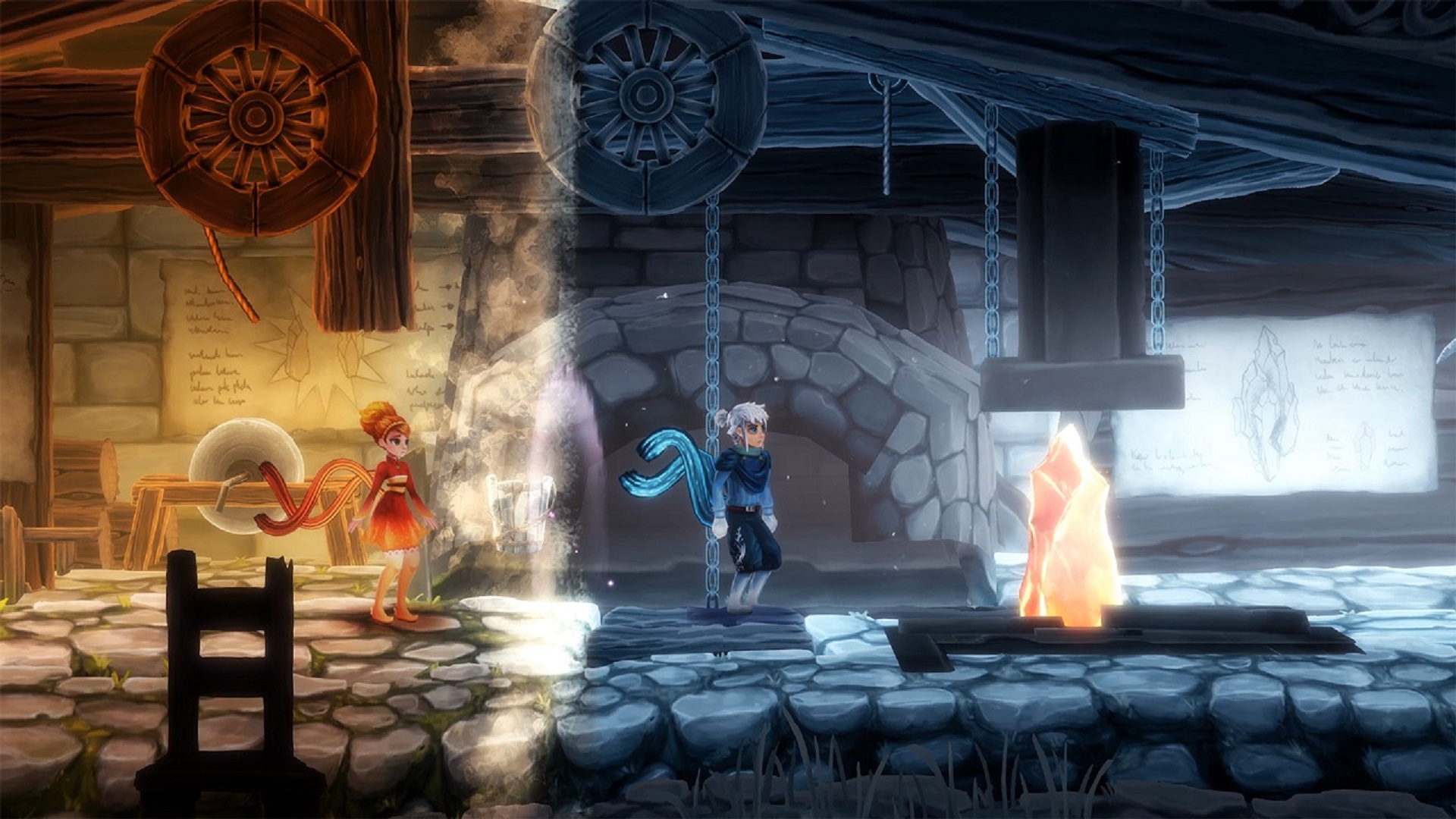 From the moment you first start Degrees of Separation, you won’t be able to keep your eyes off the game’s vibrant and rich art. The contrast between Rime and Ember’s worlds is exquisite. The seamless transition between them as you move through the landscape is nothing short of magical.

Pair this with a soundtrack that is equal parts whimsical and melancholy, and you have a purely beautiful and magical world to explore. Composer Kristian Brastein really outdid themselves here. The soundtrack effortlessly combines woodwinds with strings, harps, and piano to formulate an atmospheric soundscape that works not only for the game, but for calm listening outside of it as well.

As is tradition for me, I always listen to a game’s soundtrack while reviewing it, and this is one of the best ones I’ve heard in some time. I only wish this kind of emotion had found its way into the storytelling. The puzzles, while well designed, could have used more variety as well.

Even with these little flaws, however, Degrees of Separation is absolutely worth a look if you have a co-op partner who plays games with you. It’s a beautiful and serene experience that will test even the most capable of puzzle-solvers.