Among the selection of wave shooters on PSVR, the first Dick Wilde stood out as a fun, hilarious, and capable option. A sequel was bound to happen, and now that Dick Wilde 2 is here, the game offers even more variety and online co-op as well.

Should we head back to the swamp to help good old Dick hunt some critters? Let’s find out!

Improving on a Great Foundation and Going Wilde

The setting and style of the Dick Wilde series has always been on the whacky side. Some may take issue with the stereotypical archetypes like Dick himself, but for me it’s all in good fun. I actually really enjoyed some of his references as I hit checkpoints in the levels.

My personal favorite was when he would shout: “It’s-a-me, Dick Wilde! No, that doesn’t work…” (I’m paraphrasing here, but the first time I heard that I laughed pretty hard.) So, while his trademark quips are back, Dick Wilde 2 doesn’t offer too much in the realm of story.

Being an arcade shooter, this isn’t too much of a surprise. There’s enough personality in the levels and design to keep you interested without the need for a detailed explanation of the world. While the setting and characters remain largely the same, it’s the gameplay that’s received a major overhaul.

For starters, the levels in Dick Wilde 2 aren’t static areas where you sit in one location and shoot oncoming enemies. Instead, the sequel is divided into several themed worlds with multiple levels in each.

During each level, you ride down a river and take out a mixture of enemies and obstacles as you chase that next checkpoint. Each of these junctions offer branching paths, ensuring that you’ll need to replay each level if you want to collect all of the keys on each path.

Beyond a chance to take a breath, the checkpoints also allow you to spend cash you’ve earned to purchase upgrades, health, and new weapons. Unfortunately, these upgrades and gun purchases are only for that level, so you’ll start from scratch when you move on to the next.

I would have liked at least some things to carry over, but I understand that the difficulty would be far too easy if you maxed out your options by the end of the first world. The economy in each level allows for some experimentation and levelling if you’re quick on the draw.

One thing I really liked about the new levels, beyond the on-rails movement, was the addition of obstacles in your path that you have to destroy to avoid damage. Unique areas like mining tunnels also have enemies attacking from minecarts above and beside you, so not all enemies come from the water either.

Everything you kill or destroy gives you cash and powers up your super meter. When this is full, a press of the X button gives you a superpowered weapon for a short amount of time, which is extremely helpful when you need a second wind.

New boss fights also add some massive and unique designs to the mix. While the first Dick Wilde was perhaps too difficult, the sequel strikes a nice balance while still requiring lightning fast reactions and reflexes (especially during boss fights).

For those who want to game with a friend, Dick Wilde 2 also offers online co-op with cross-play so you can team up with PC players. This mode works exactly how you would expect and gives you support on your raft down this crazy river.

Just like the first game, Dick Wilde 2 also offers support for both 2 Move controllers or the PlayStation Aim controller. The Aim controller remains my preferred way to play, and Dick Wilde 2’s tracking is once again a hallmark of excellent in virtual reality. The aiming, dodging with your physical movements, and responsiveness was absolutely superb. 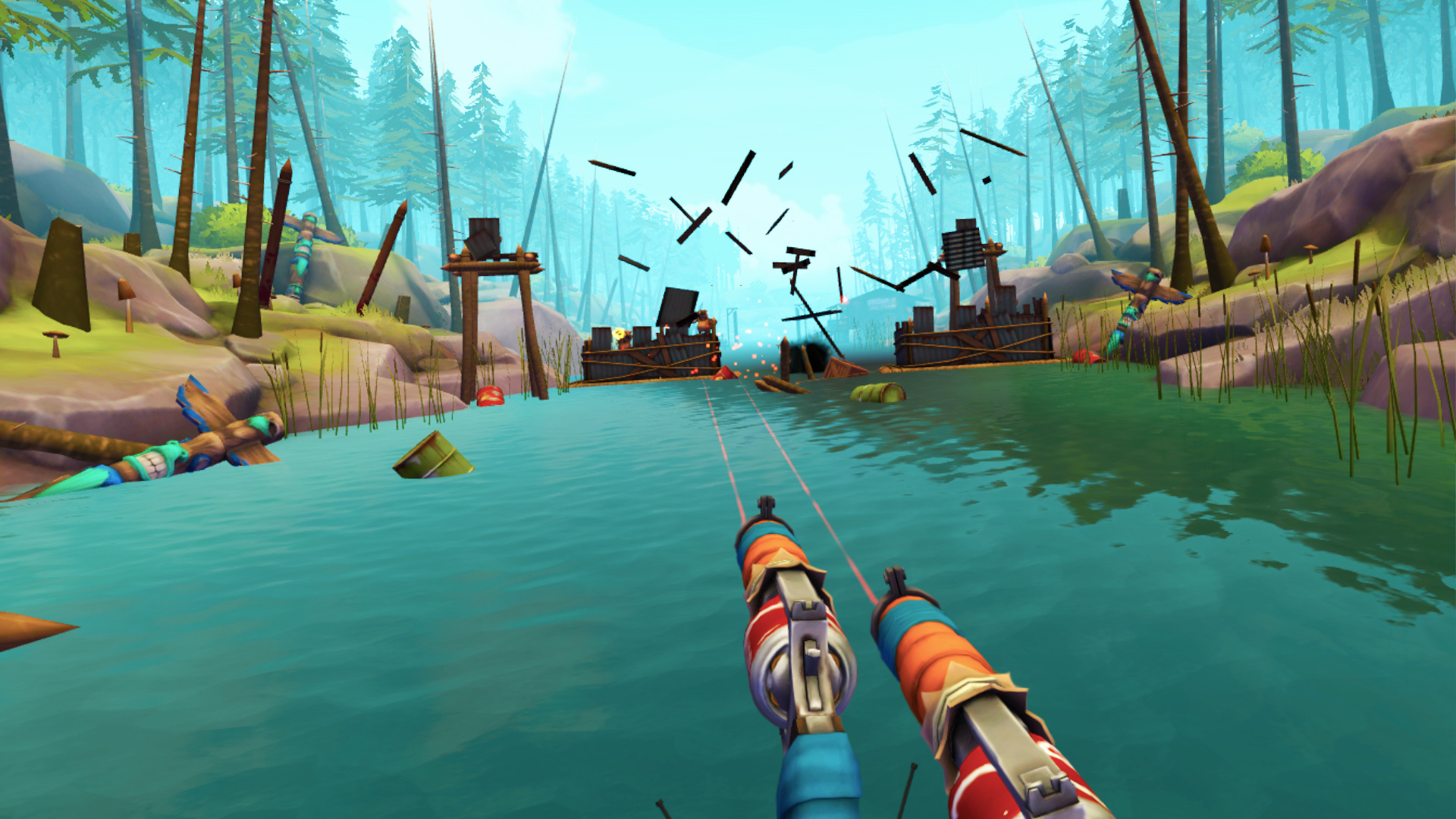 The original Dick Wilde is easily one of the top three titles I use for introducing VR to friends and family. The sequel has already taken that spot for me, thanks to improvements in almost every area of the game.

The graphics, while simple, are crisp and colorful in PSVR. The controls (especially using the Aim controller) are second-to-none, and the dynamic levels make the gameplay more interesting and engaging.

Fans of the original should absolutely jump in as there’s plenty to love about the sequel. Those who are interested should also take a trip down to the swamp. The $20 price tag offers plenty of content, polished gameplay, and superb controls. You can’t ask for much more from your shooters in VR.