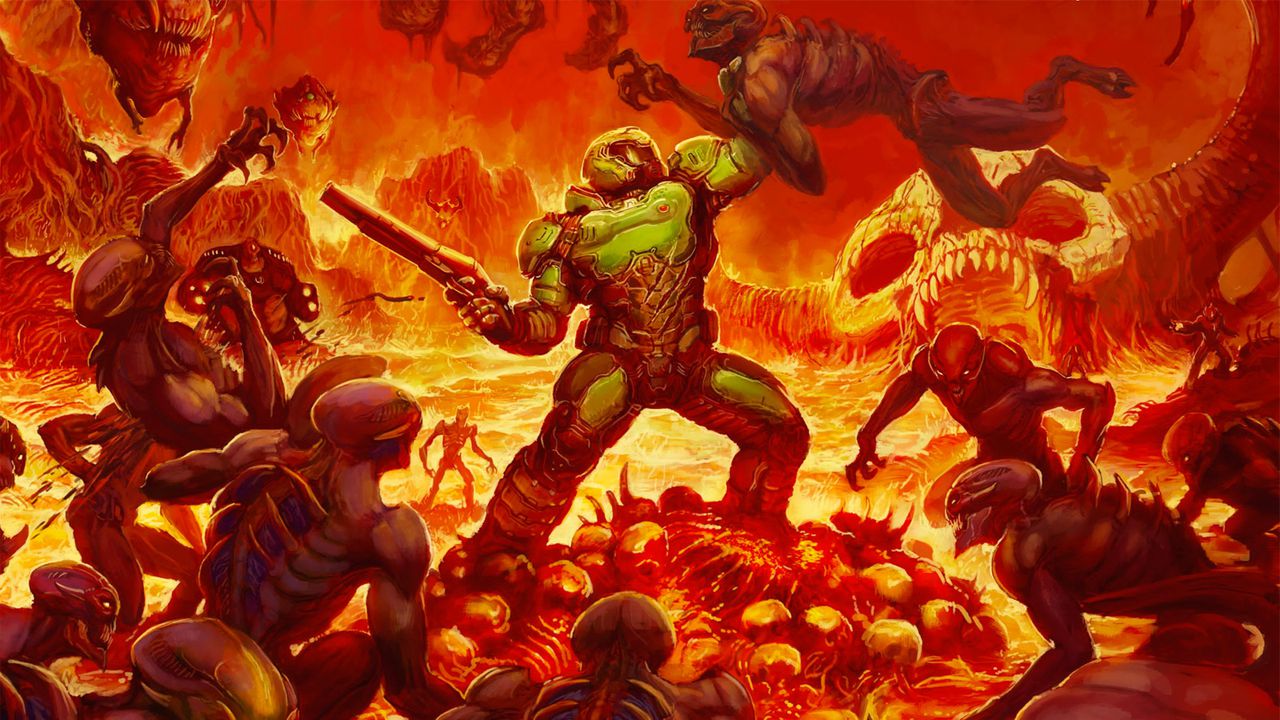 When I was kid, Doom was one of the first games I ever played. I know how that statement sounds, after all, what parents would let their kid play an M-rated game? Well the ESRB wasn’t around back then.

To this day, I still go back and play it. Needless to say, I’m a long time fan. I even liked Doom 3 despite hardcore fans saying it was nothing more than a series of monster closets (it kinda was to be fair). So, now that the new Doom is here, do we have a successor worthy of the name, or should this game be cast back into the fiery chasm from whence it came?

Wait a Second, Did Doom Just Get an Awesome Story?

I don’t agree with that, but back then, the lack of a story made the original Doom a fast-paced shooter without unapologetic amounts of violence. The speed and visceral feel of the gameplay was only matched by other games developed by id Software and has rarely been captured since.

I’m a man who wants a great story in my games, but how you deliver that story can be up for negotiation. Case and point, the new Doom game manages to include an awesome story with little to no cutscenes. This gives it that classic high-speed Doom feel, with enough backstory and lore to make everything feel real.

Allow me to explain in more detail. With Doom it’s all about the little things. Sometimes you’ll get a legitimate cutscene like we’re used to, but other times I holographic tour guide will trigger and offer a small blurb while you’re walking by.

The real meat of the story exists within the game’s codex. This does require a good chunk of reading, but the collectible entries are spread out enough that you don’t have to constantly stop and read entries.

While I would have loved to see some of these elements represented in the game itself, the exquisite writing and lore building makes it so people like me can learn everything there is to know about this world, while other players who just want to kill things have quite literally nothing standing in their way.

It’s a unique balance that offers something for everyone in terms of story. What is there is incredibly interesting. There’s a great build up of information on the Union Aerospace Corporation (UAC) and the cultist undertones hidden within. You also get tons of interesting scientific information on the demons you encounter in the game.

Does it really matter why a Mancubus explodes when you rip its tube or shove its own heart down the thing’s throat? That’s up to you, but if you’d like to know why their unique physical composition makes this happen, it’s in there.

Ever wonder which demons are higher up in the ranks downstairs? You’ll find that in the codex entries as well. Are you wondering how this one space marine is single handedly wrecking every demon’s face he comes across? You’ll find a surprising amount of story there as well.

If you really couldn’t care less, then throw caution to the wind, grab your super shotgun, and start blowing some demons back to the ninth circle. It’s an approach to story that I like because it balances the detail with the option for straight run-and-gun action.

Doom’s gameplay is, simply put, the perfect evolution of what started the series so long ago. You move with the speed of a starving lion, and you rip apart demons with the rage of a complete and total badass. Doom doesn’t take itself too seriously, and that’s what makes it so awesome. No one has any business moving that fast or double jumping with rocket boots, but this game makes it work.

Glory kills, one of the game’s more divisive mechanics, works flawlessly. When a demon is staggered, you can move in for a close and personal melee kill that is absolutely satisfying every time. What’s more, these kills always yield health pickups so they work as a strategic way of getting yourself back in the game when the proverbial excrement hits the fan.

These kills are quick and vary based on if you attack from the front, side, or back. Speaking of melee, the iconic chainsaw makes its triumphant return and comes with a unique tweak. Sawing through a demon will consume a certain percentage of your fuel based on its size.

It’s an instant kill, and it drops a metric ton of ammo every time as well. On the flipside, you’ll need to find more fuel to do it again. Balance in the face of chaos is the theme here, and it works like a charm.

The moment-to-moment gameplay puts you in large arena-like areas with verticality, but don’t expect to take cover and shoot from there. Demons swarm in like flies to honey and you have to stay on the move if you want to avoid a game over screen where a Hell Knight forcibly alleviates you of both your legs.

At its best, Doom brings a devilish grin to your face while you bathe in the gory cadence of perhaps the most satisfying shooter ever made. At its worst, Doom makes you suffer through awkward first-person platforming that made me want to break a control faster than you can say “Dark souls made me do it.”

Overall, though, Doom’s single player gameplay is a literal blast and I find myself excited to play through the campaign again and again. Beyond the explosions and bloody rain, Doom also brings back the iconic hidden areas, secrets, and collectibles the series is known for.

Along with this, the game adds several progression systems that work incredibly well. Many of the collectibles you’ll find as you progress give you the option to add mods to your guns, upgrade said mods, upgrade your suit, and even upgrade your maximum armor, health, or ammo.

Beyond this, there’s a series of “Rune trials” you can find that give you runes that can be equipped for additional bonuses, and yes, upgraded as well. It seems like a lot, but everything fits together like a jigsaw puzzle of demon blasting perfection.

Don’t worry, you’ll still be able to find the game’s iconic powerups like invulnerability, quad-damage, haste, and the like. Honestly, the only thing I could have done without were the awkward platforms segments.

Moving to the other modes, you have online multiplayer and a level creator mode called SnapMap. Let’s start with the PVP. The online modes include the following options:

There’s no shortage of modes, and the maps are interesting enough to keep things moving. Pickups like demon runes that allow you to temporarily transform into the demon of you choice are pretty awesome as well. The same movement and double jump from the single player is back here as well.

You have a ton of customization options for both your characters and your guns, though many have to be unlocked through standard multiplayer progression. Preset and custom loadouts are available in addition to hack modules that act as temporary boosts you can use at your leisure.

It’s solid, nothing that reinvents the wheel, but the fast-paced gameplay made it more fun than your average Call of Duty match in my opinion. Now, let’s talk about SnapMap. This is an extremely robust level creator that allows you to create single, cooperative, and multiplayer maps with your own rules and modes.

The initial offering are interesting, with some quirky creations like “Music Maker 9000.” There’s no shortage of options for creative people, though, so with enough user input, this mode could really go places.

It’s worth noting that while you can play this mode without a PS+ subscription, you won’t have access to the latest maps or the multiplayer ones unless you have a plus subscription.

Overall, if you’re a fan of Doom, this game brings back everything you loved with only minor quirks. I absolutely love it.

The new Doom runs on id Software’s id Tech 6 engine which manages to create some beautifully devilish graphics. What’s more, the game manages to run at an incredibly smooth sixty frames per second roughly 98% of the time. I noticed a few slowdowns in really intense shootouts, but for the most part, the game ran like a dream and looked good while doing it.

This is a testament to id Software’s ability to optimize their game engines. In a world where console games rarely hit 1080p, let alone 60 FPS, Doom stands tall above the others as proof that it can be done (albeit with a variable resolution).

The design of the Mars landscape is serviceable, but what truly shines are the excursions into the titular Hell dimension where you traverse strange and terrifying landscapes. Overall, this is one of the most polished shooters ever to come out thus far on PS4. It looks good, and it plays good.

I love Doom, and I think this new iteration is the ultimate successor to the classic entry. It comes with a few nitpicks here and there. The multiplayer doesn’t do anything massively different, and SnapMap’s success is dependent on the community, but based on the single player alone, the king of first person shooters has forcibly (and rightfully) taken back its throne after all these years.

Now if you’ll excuse me, I’d like to get back to slaughtering demons now.