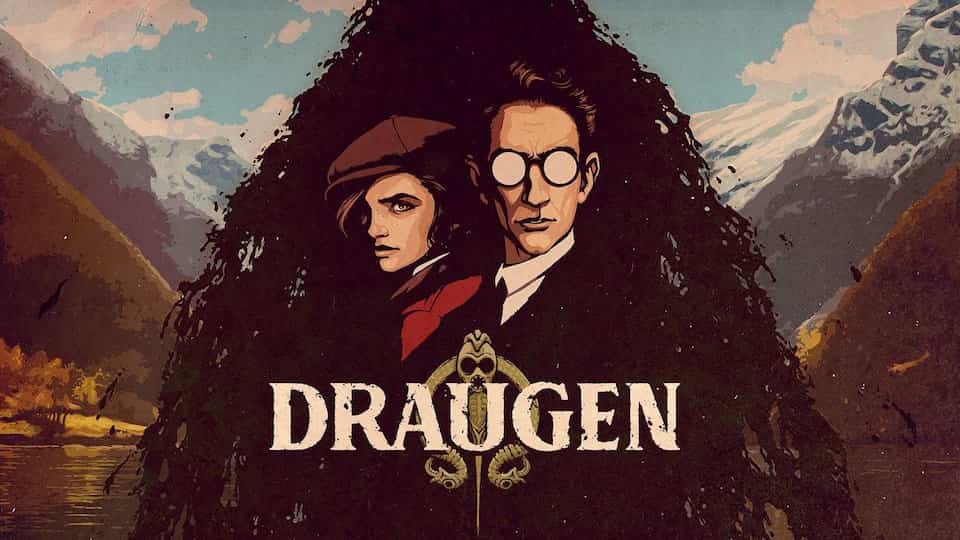 Since I was very young, I’ve always felt that games were the best way to tell a story. Say what you will about “walking simulators,” (a term that I thoroughly despise) but games bring together narrative, visuals, music, and interactivity in a way that no other medium can boast.

One of the best storytellers in this medium for me is Ragnar Tørnquist, who is best known for his work on The Longest Journey series, the last of which was made by his studio, Red Thread Games. Now, for the studio’s sophomore effort, they offer Draugen: a nordic mystery set in the 1920s on the coast of Norway. Does this title continue their streak of telling great stories? Let’s find out.

While it has no bearing on this review, I actually have interviewed Ragnar Tørnquist myself before, though it was a job interview for a position at Red Thread Games. I wasn’t the right fit for the role, and have since found my place in the world of writing, but this was back when the studio first teased Draugen, making it a title I’ve followed closely over the years.

Back then, the game seemed to be focused on horror and the lore of Draugen in scandinavian culture. Things have shifted somewhat for the final release, instead focusing more so on the story of the setting and the backstory of the main characters. What we have, then, is a narrative focused mystery set in the village of Graavik on the coast of Norway in the early 1920s.

You play as Edward Charles Harden, who makes the journey to the village from America with Lissie, his ward, in the pursuit of Edward’s missing sister, Betty. The game begins with Edward and Lissie approaching the village, and it quickly becomes clear that things are awry.

For starters, everyone is missing. The family that Edward has been in touch with via letters is nowhere to be found, along with the rest of the village townsfolk. This makes for a beautiful, if eerie premise as you explore the various buildings and nearby landmarks in search of answers.

Draugen’s story is the centerpiece of the experience here. It begins as a single arc, but quickly separates into two distinct threads. On the one hand, we have the story of Edward, Lissie, and Betty. It’s Edward’s missing sister, Betty, that brings him to Graavik, but even this correlation is a little shaky.

In the beginning, I was interested in Lissie and Edward primarily, since the game’s dialogue revolves around them almost entirely. Getting to know them and their backstories was compelling for me as I waited patiently for Graavik to give up its secrets.

The story is a little unbalanced as it goes on, however. For starters, the first half of the game is slower, albeit intriguing as you uncover more about the people of the town and their stories. Around the halfway point of the four hour journey, things pick up significantly.

As a result, the second half feels very fast as it barrels towards a conclusion. It leans heavily into Edward’s story as well, which has some interesting revelations, but ultimately seems like something most players will predict well before things come to light.

The story of Graavik does get attention as well, but it feels like an afterthought by the time the credits roll. The story purposefully leaves certain things vague, which is fine, but some things are dismissed, even by the characters themselves, and left hanging. This aspect of the story was frustrating, because it felt like a lot was being left on the table.

When it’s all said and done, astute gamers will see a message in the credits alluding to a sequel, which insinuates that perhaps these threads will find resolution in the future. A prequel comic also unlocks in the extras menu once you’ve finished the story. It helps explain a few things, but I ultimately felt like the story over promised and under delivered by the time it was over.

Part of this comes from the fact that, by the end, it feels like both stories don’t quite co-exist in the world and it makes Graavik feel like set dressing instead of an integral part of the journey for the characters. I think this could have been remedied with a little more length to the story, allowing the mysteries of Graavik to reveal themselves in more detail, and perhaps tie more strongly into the stories of Edward, Lissie, and Betty.

In terms of gameplay, Draugen features a mixture of exploration and exposition as you journey through Graavik in search of clues. The dialogue between Edward and Lissie is natural and reflects their personalities well. Edward is stoic, serious, and logical, while Lissie is free-spirited, whimsical, and open-minded.

As a result, they clash constantly, and while dialogue choices don’t have an impact on the story (other than how Edward perceives things) it does allow you to steer some of the more grandiose moments towards whichever side you prefer. It’s a solid cast, and Lissie in particular is one of the most interesting companion characters I’ve seen since Bioshock Infinite’s Elizabeth, which is high praise as that’s one of my favorite games of all time.

You’re able to interact with certain things throughout the village, offering additional dialogue and depth into the people who lived there, but I would have liked to see more of these since a lot of locations end up feeling less interactive without much to say or do while you’re there.

All of this does contribute to one important factor, however, and that’s atmosphere. Despite being deserted, the village of Graavik feels very realized as you explore the farmhouse, church, general store, and other locations. There is a sense that people live here, and the general air of mystery makes everything feel eerie, despite the majority of the game taking place in broad daylight.

Ultimately, Draugen is a game that I’m very happy I played, and a story that has some very high points. It tackles heavy themes that would be a spoiler to mention, but approaches them with a more positive focus than other attempts, making them feel more like obstacles to overcome than roadblocks we’ll never surmount.

I wish the game has given equal attention to its varying stories, but those who enjoy a narrative-focused adventure with excellent writing and voice acting will find plenty to love about their trip to Graavik.

A Gorgeous Glimpse of The Scandinavian Coast

Draugen’s presentation is superb across the board. The game plays and looks great on PS4 Pro, with no real glitches or performance issues to speak of. The absolutely stunning use of color and scale makes Graavik feel like something out of a fairytale, despite being based on the real world location of Norway.

The voice acting, as I mentioned, is excellent. Both Edward and Lissie deliver stellar performances throughout. All of this is wrapped in a soundtrack composed by Simon Poole that pulls from Norwegian influences in ways that help make the world feel authentic and unique.

As I reach the end of this review, I’m reminded of that job interview with Ragnar Tørnquist. The last thing he asked me was where the ladder positioned in the back of his office leads. As we were chatting via Skype, I couldn’t see.

I answered with a generic response, citing that it was a stairway to heaven, like the Led Zeppelin song. In retrospect, I should have said that it leads everywhere, because there are no limits to the stories that Red Thread Games can tell.

Draugen may have floundered somewhat on the landing, but the overall experience is one that showcases a masterful combination of storytelling, presentation, and atmosphere. It makes me incredibly excited to see what Red Threads Games does next.

A copy of Draugen was provided to PS4 Experts for review purposes.