As a kid, my first experience with a turn-based combat game was Pokémon. The idea of pitting recognizable characters together and strategizing based on their element was a great entry point for a new RPG player.

That same formula has come into play countless times over the years, and Drawfighters is the next game to bring us a character roster that must fight one another in turn-based combat. Does this character brawler inspire you to push forward and create your own characters? Or, does it fail to inspire? Let's find out!

The Tournament of the Three Volcanoes

The premise in Drawfighters is simple: you are a rookie Drawmaster training with some of the best Drawfighters in the world to win the coveted Tournament of the Three Volcanoes. If you want to win, you'll need to train your fighters and possibly even create your own to succeed.

You start with three characters, but you can unlock more, and theoretically create more as time goes on. The characters you have to choose from are a mixture of medieval and Mexican wrestling themes. Some of them have chuckle-worthy names like "Many Trejo", and others have generic names like "Stomp."

The designs are fairly interesting, but the characters themselves lack any kind of unique personality that would endear them to the player. They have their own elements, but even those will repeat.

Their designs are fairly unique, but that's about the only defining quality they have when compared to other characters. While the Tournament of the Three Volcanoes and its energetic announcers makes for a decent framework for the narrative, it's never very compelling.

The announcers themselves will have a lot of generic quips and flat jokes, but sometimes they will comment on how you leveled up your characters to prepare for this fight after you did so, which is a nice touch.

The leader of the gym where you're training is perhaps the most interesting character, but we still don't know much about him. Still, his pep talks are the only real interaction we have with any of the world's characters.

Once you finish the story mode, you have the option to play again to continue leveling, or the current version of the game as of this writing also has a 2-player local vs mode.

As you play, you can earn tokens for the game's Smartphone app, Drawfighters Shaman, where you can draw 2D creatures and bring them to life in 3D.

I loved this idea, but despite numerous attempts, I could not get the app to connect to my PS4. I tried on multiple phones, and even made sure the phone would connect via the PlayStation App, and I had zero success.

Being able to import my characters would have been fun, and it's sad that it didn't work for me, despite trying many times to make it work. Even with this feature, though, Drawfighters is lacking a narrative spark.

Even without any additional story, the game's actual Drawfighters lack any kind of personality or unique qualities beyond their looks. It's hard to get attached to any of them or feel a connection to the world when we don't have much to go on.

Stronger characters, more story, or both could have given this game a unique identity. Let's see how the gameplay fares.

A Strong Foundation For Turn-Based Combat 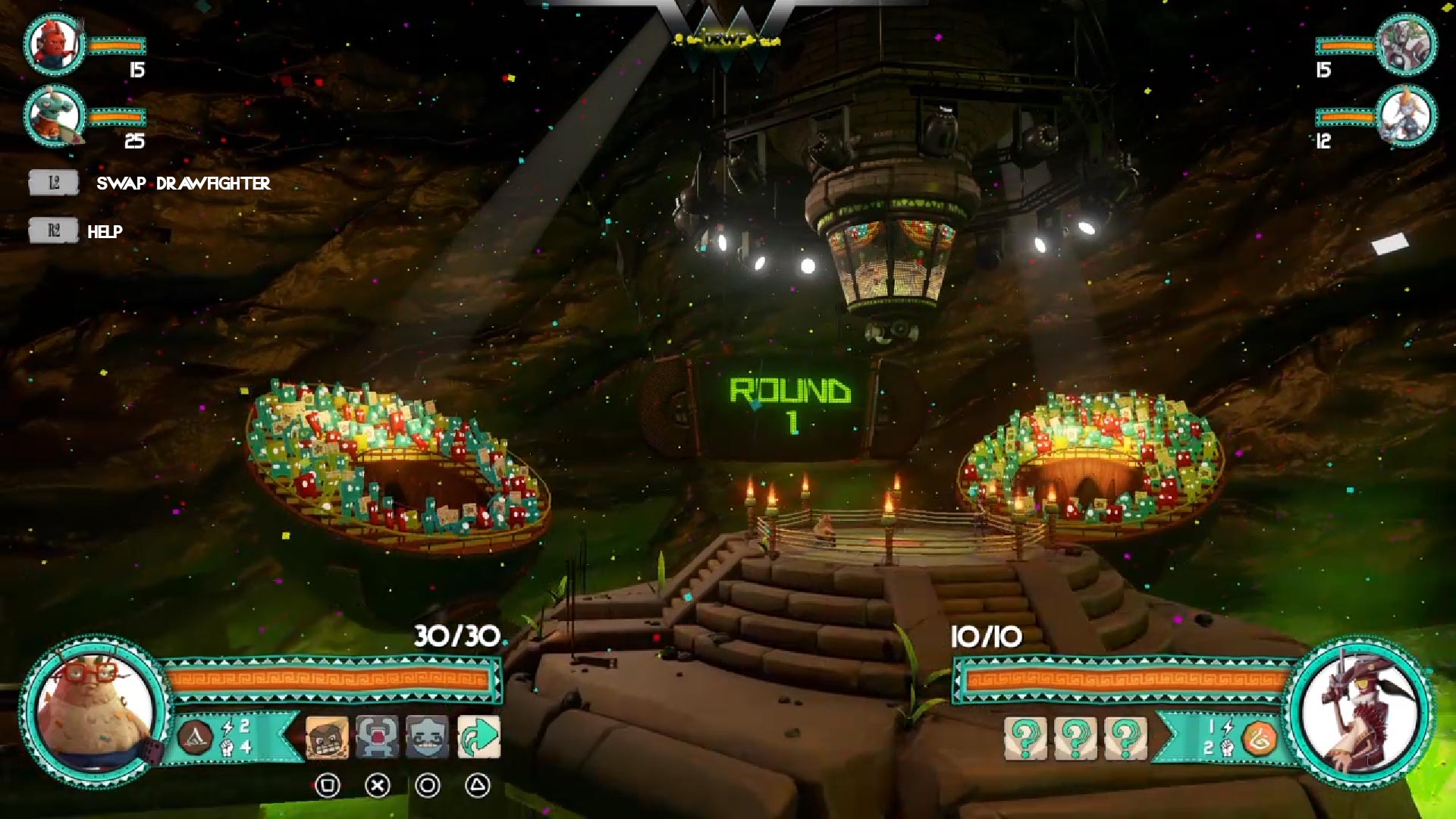 The actual fights in Drawfighters can be a little slow, but there's a fast-forward button to push through attacks, especially when you've seen them several times before in the same match.

You'll have three drawfighters on your team when you start. You can swap between them during your turn or stick with who you have. Each character will have three attacks you can use. They will also have a strength and speed stat in addition to their health.

Speed decides who goes first on any given turn, so it's an important stat to have. Pressing R2 also pulls up a handy wheel that shows the games various elements and which ones are weak to others.

Your starting abilities are pretty generic, but Drawfighters does offer a wide variety of moves and effects as the game goes on. You'll earn yellow crystals to upgrade your fighter's stats, and red gems to buy abilities that any character can equip.

Matching elements to that character's inherent element will add a bonu to your attacks. So, the fire guy should have fire attacks for the best benefit.

The elements go beyond your simple fire, water, earth, and wind. There are extra elements here that add more variety and more attack options. Furthermore, abilities can have status effects that hit the whole team, or cause damage over time.

Defense abilities can nullify damage for several turns or reflect damage back at your enemies. Each match lasts until one team's three fighters have gone down.

The difficulty in Drawfighters isn't too bad for the first chunk of the story mode, but enemies do put up a good fight as you go on. Playing with others in the 2-player mode can give you a bigger challenge as well.

Ultimately, Drawfighters has a strong foundation for its combat system, and the attack animations are pretty cool if a little stiff. Perhaps some additional difficulty levels or a future online mode could add some needed challenge to the proceedings.

As it stands, it all works fine, and the fast-forward button ensures you don't have to sit through the same animations over and over. There's a good variety of attacks and strategies that you'll unlock as you play. Since the app wasn't working for me, I had to use the characters given to me in Drawfighters. There's a unqiue, but odd art style in place here. Some of the characters have standard looking designs, others go for a cutesy look, and some just look weird.

It's not necessarily a bad thing, but it's hard to tell if Drawfighters wants to attract a younger audience or not. For example, one of the first characters you get looks like a pepper with a fork for a weapon. Everything looks good until you see his face, which looks wrinkled with bags under his eyes.

It's just an odd design choice. The proportions on some of the characters are also out of whack, with lumpy heads or gangly bodies. It's not bad, but it's not very aesthetically pleasing either.

Some character designs work better than others, and while I appreciate the enthusiastic voice work from the announcers, many of their lines fell flat.

I think Drawfighters is a solid foundation for a game concept. The combat and skills are varied and interesting, but the characters like charm or personality. The smartphone app is a great idea, but it's uncertain nature means a major feature of the game may not work for you.

Drawfighters is a gamble. You may enjoy it for the combat and strategy, but you're also risking the loss of a cool feature with the app if it doesn't work for you. The price is a little high to take that leap right now. Perhaps if the app can be fixed and a sale brings the price down a bit, I could recommend giving this one a try.

As it stands, Drawfighters is lacking that unique draw that pulls people to these types of games. Keep it on your radar though, it's a solid turn-based combat game at heart.