I've always enjoyed games where you're forced to be the bad guy and relish in the fun of being evil (without all of the guilt that comes with it). These types of games usually use humor to dull the edges, so it doesn't feel like you're doing an evil run in a modern RPG where everyone tries to make you feel bad for doing so.

In Dungeons 3, you play as an ultimate evil who seeks to corrupt new lands and spread its influence. With your very own dungeon to manage, and an army to fight off those pesky heroes, does this game make it fun to be evil? Let's find out!

A Simple Premise Elevated by an Excellent Narrator

The concept behind Dungeons 3 is fairly simple: you are an all-powerful evil force who has conquered the known world, and now you're bored. As it turns out, there is another continent over the ocean that has yet to be pillaged and plundered by you and your minions.

So, you set in motion a plan to expand your reach and begin a conquest of this new kingdom. You set your sights on a reformed dark elf who is trying to fight her evil ways.

A meaty campaign starts with this premise and stretches across 20 missions that can also be played co-op. It's a fun story that is filled with excellent voice acting and hilarious jokes that often break the fourth wall and reference other modern fantasy games, movies, and television shows.

Since your goal here is domination, corruption, and a general massacring of the local populace, the game's light-hearted approach, and humor make it easy to enjoy the proceedings.

The standout here is the narrator, played by Kevan Brighting of Stanley Parable fame. His tongue-in-cheek style of narration brings all of the game's jokes and narrative moments to life in a way that no other voice actor could do.

For some people, the jokes and the dark humor may not be their style, but I really enjoyed all of the clever fourth-wall breaks and the hilarious narration throughout.

It's a story that mostly relies on its humor to push the narrative forward, so it's not going to rival any high fantasy epics, but the humor was enough to keep me engaged throughout.

An Eclectic Mixture of Strategic Gameplay 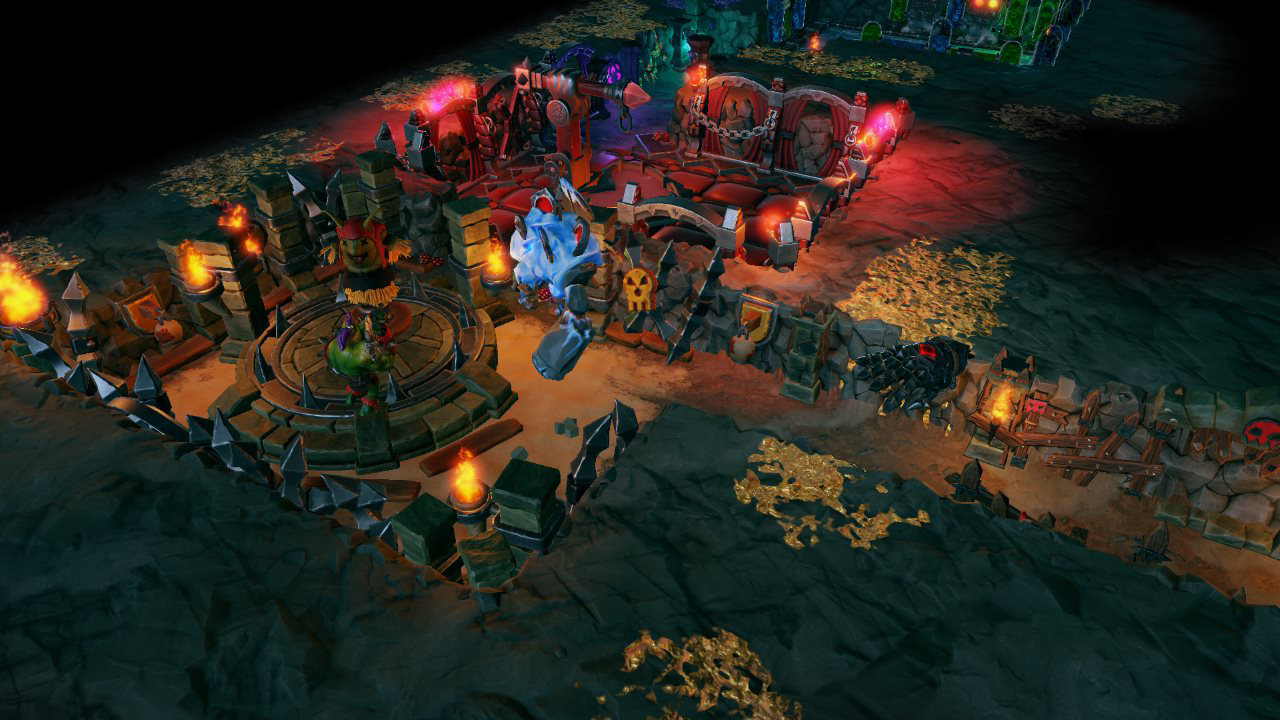 Dungeons 3 may look like your standard RTS on the surface, but you would be mistaken for judging this book by its cover. While the game does employ an isometric camera, there's a mixture of different mechanics here that makes for a fun and varied experience overall.

Your missions will begin underground, typically at the heart of your dungeon where a giant crystal rests known as the Dungeon Heart. Your goal is to keep this gem from being destroyed, while also managing the objectives of your current mission.

To keep your dungeon safe, you'll need to expand, fortify, and build your army from the ground up. Your basic workers can be used to dig new tunnels and rooms for you to build structures. You'll find gold veins to start mining from, and pockets of gold in the ground as you dig.

Structures can be built in the rooms you dig out that give your minions food, a place to rest, and other functions. You'll start with a basic set of options, but you can quickly begin spending resources to upgrade various skill trees that offer higher unit limits, new units and structures, and even magical spells you can use to turn the tide.

Ultimately, you'll also gain the ability to set up traps between your dungeon's entrance and the Dungeon Heart. This way, when any heroes find their way inside, you can quickly smite them by triggering these contraptions.

During all of this, you'll also begin raising an army of beasts and creatures, all of whom are led by the dark elf Thalya who possesses abilities of her own as well.

At any point, you can send your army to the surface, which is when Dungeons 3 adopts a standard RTS style of gameplay. You can direct your armies to fight enemies and complete objectives.

Corrupting various areas on the surface allows you to generate further resources. It's also quite satisfying to watch the trees and local fauna wilt and turn black as the ground turns to ash beneath your feet.

The campaign offers a nice variety of objectives for each mission, along with side objectives to complete as well. The robust skill trees also give you plenty of flexibility in terms of how you build up your dungeon and army.

All of this is introduced to new players through a series of tutorial missions. These take a good while, and probably could have been condensed, but they did a good job of introducing all of the mechanics. Even so, I found myself becoming fatigued by the tutorials before I could actually play the campaign.

The moment-to-moment gameplay in Dungeons 3 works pretty well, considering the game's origins on PC. There are a variety of quick action you can do with various trigger and button combinations, eliminating the need to wander through menus every time.

These combinations are simple once you know them, but I found myself opening the menus a lot just to figure out which combination I needed, so they do take some getting used to. It seems like the best option for a game this complex to make the leap from computer to console, even if it's not ideal.

Growing pains aside, I had a lot of fun playing Dungeons 3. The mixture of dungeon gameplay, along with the surface world RTS combat kept things interesting during each of the campaign missions.

It does tend to have some hiccups on the technical side of things. Frame rate drops did happen at times, and I have heard reports of crashing, but I didn't experience this myself while playing. Overall, though, the game feels polished and well-translated to the console.

Dungeons 3 uses a simple, but effective fantasy style of graphics that leans on bright colors and sharp presentation. There's enough detail to make everything stand out, but it still retains the colorful cartoonish look that we've come to recognize from similar titles in the genre.

As previously mentioned, the voice acting from the narrator and the entire cast as a whole is excellent. They bring the clever humor and wit to life with great performances that always warranted a chuckle or grin while playing.

If you like to live on the evil side of things every once and awhile, or you're hungry for more strategy titles on the PS4, Dungeons 3 is a great option for casual and hardcore fans alike.

A PS4 copy of Dungeons 3 was provided to PS4 Experts for review purposes. Version was tested and reviewed on a PS4 Pro.