Fighting games and brawlers are the foundation of all great video game parties. There's nothing quite like having some friends over and settling arguments over some local multiplayer competition. Dynasty Feud is here to scratch that itch for you with a unique combination of gameplay mechanics.

Does this game manage to create a brawler that will rule over your parties into the foreseeable future, or does it not offer enough to keep you playing? Let's find out how this duel of the dynasties panned out.

An Eternity of Fighting

There's no story mode or campaign to speak of in Dynasty Feud, but you can find out a little about the story by reading the game's menus and tutorials.

Essentially, the game's setting is the afterlife, and the dynasties are long fallen warriors who have nothing better to do than fight each other to keep things interesting.

The game's primary focus in on local and online multiplayer. Each of the dynasties has their own unique characters and background, but beyond their unique appearances, there isn't much narrative to pair with the proceedings.

Being a multiplayer brawler, the lack of a story isn't surprising. Let's find out how the gameplay holds up.

A Streamlined Selection of Brawling Mechanics and Modes

With support for 2-4 players, you'll need at least one other person/controller to play any of the modes. The lack of any single player content means that this will be a game you only pull out for social events.

Despite this, Dynasty Feud does offer some compelling options for modes. You have the standard free-for-all where everyone plays against each other. Second is the Team mode that allows you to pair players into separate teams or gang up on the guy who thinks he can't be defeated.

The most interesting mode is the All-Star option that allows you to form your own dynasty by handpicking characters to build your team. A star system ensures that you can't equip the most powerful characters to fill your slots. You'll need to be strategic as each character is worth a number of stars and you have a limit for your total.

Once you jump into a match, you'll find that the maps are large enough to move around, but about the size of a typical brawler so the action fits on a single screen.

The maps do offer some environmental hazards which can spice things up during combat. You'll play as one member of your dynasty at a time. In most cases, a single hit will kill you and you'll be forced to revive as the next member in your lineup. 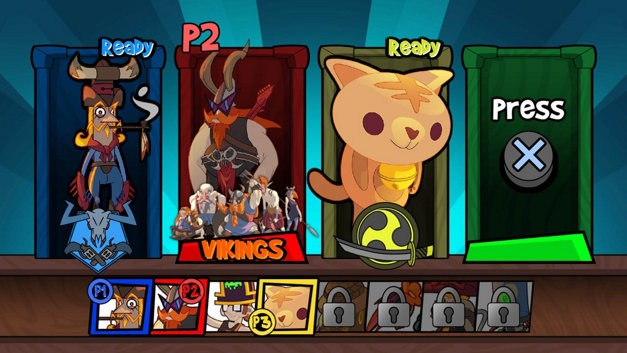 Some abilities only take half of your health, offering some balance to the faster attacks that are difficult to dodge. After a certain number of kills, you can execute a special move that fills a vast majority of the screen and kills anything it touches.

While you're waiting to spawn, you can fly around as a ghost to choose your spawn point and use "annoy" moves that can distract or hinder the other players on the screen.

The one-hit kills in Dynasty Feud give it strong pacing, and the characters in each dynasty have widely varied attacks. Some of them boil down to just ranged or melee, but they all have a unique flourish to them.

It will take numerous matches to unlock all the maps and dynasties, but this gives you the opportunity to better understand each of the characters and their nuances. All told, there are 40 characters across 8 dynasties.

There's no denying that Dynasty Feud is fun when you play with a group of people, but the lack of any single player content and the small selection of online matches hinders the game's longevity.

It's absolutely something I will pull out for the occasional party, but it's not going to occupy the majority of my time. The dynasties keep things interesting, but the lack of more modes of custom options makes the experience feel a little shallow overall.

The graphics in Dynasty Feud take a very simplistic approach. The levels are basic in their layout, and the character sprites are quite small on the screen.

The maps do have some unique environmental hazards that keep things interesting. I would have like larger characters if only to see more detail on their models, but the animation and combat all work as intended.

Ultimately, Dynasty Feud is a fun little brawler that can easily captivate a group of players in local multiplayer. It has several unique mechanics and a strong selection of characters to choose from.

The lack of a strong online community and single player content means you won't be playing it all the time, but I could certainly see Dynasty Feud being on the roster for my next gaming party.

A copy of Dynasty Feud was provided to PS4 Experts for review purposes. PS4 version was tested and reviewed using a PS4 Pro