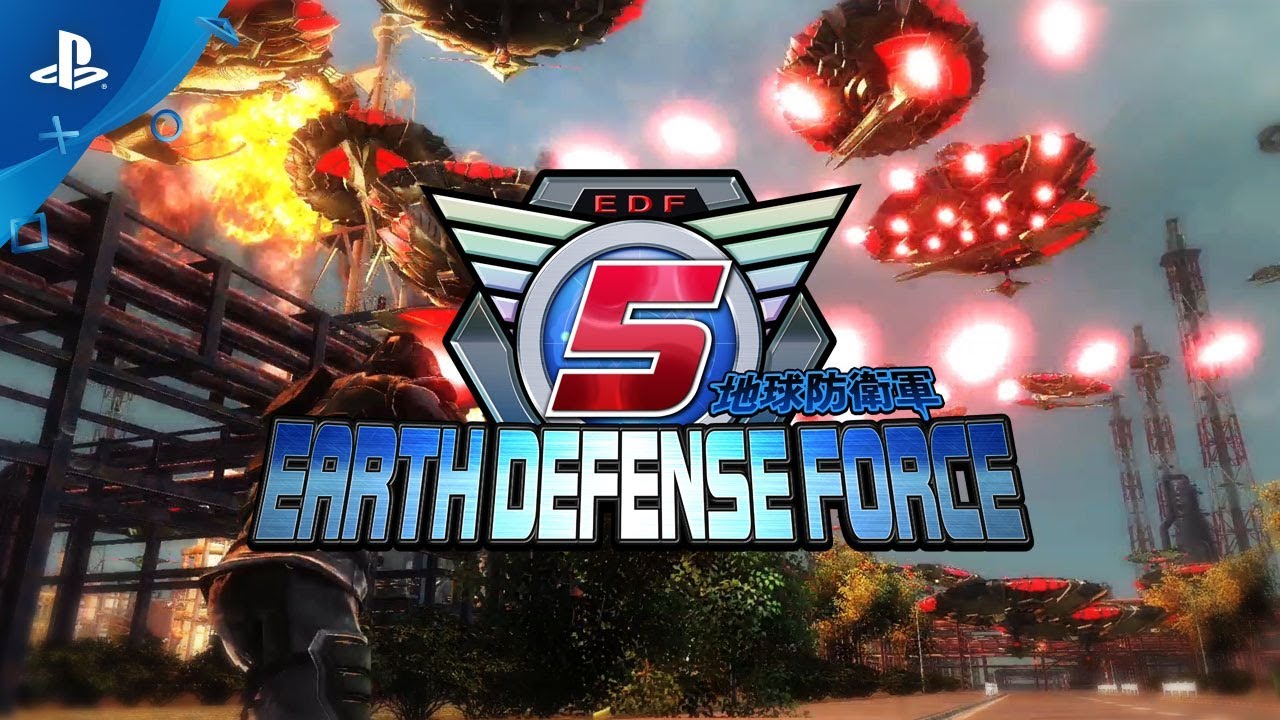 Since my first experience with Earth Defense Force 2017 on the Xbox 360, I have been in love with the series. It’s honestly one of my favorite guilty pleasures in gaming, but I realize that the uninitiated probably look at it and think I’m insane for thinking that.

Now that Earth Defense Force 5 is on the PS4, I finally have the chance to sit down and explain, in plenty of words, why you need to play this game. Is it without flaws? No, of course not, but I got an entire GameStop store hooked on this series when I showed it to them, so now i plan to do the same for you, dear reader. Let’s dive in and see how the latest version stacks up.

The Only Good Bug is a Dead Bug

The premise of Earth Defense Force 5 reads like a B-movie greatest hits collection. You start the game as a security officer in an underground military facility, only to be swept up into a global conflict when “monsters” invade.

I say “monsters” because that’s how they cheekily refer to the creatures in the game, but in reality many of them are just massive insects. Ants, spiders, and plenty of other variations fill the screen during your battles.

The game also brings in alien transport ships, massive Kaijiu creatures, and even bipedal alien enemies. The enemy variety has always been strong in this series, but EDF 5 kicks it up a notch with some of the more creative designs I’ve seen.

There’s actually a little more of a structured story this time around, with 110 missions in total. Each one can last between 15 and 20 minutes or more, depending on the difficulty. It’s all intentionally cheesy, but it works so incredibly well due to the delivery of the lines.

More often than not, the dialogue will trigger at seemingly random times, and the input of your fellow soldiers always got a chuckle out of me. There’s even a sense of camaraderie as you can use the communication wheel to chant “EDF! EDF!” alongside them.

Lovers of cheesy science fiction movies will find a ton of things to love about Earth Defense Force 5. The series found its niche in this realm of cheesy sci-fi glory and it relishes in the experience each and every time.

Of course, the real star of the show is the gameplay. Earth Defense Force 5 continues the legacy of the series by throwing you into massive maps filled to the brim with enemies. It’s not uncommon to get swarmed by ants or tarantulas and furiously backpedal while you unload your clip into them.

Combat feels better than ever in EDF 5, with plenty of colored blood gushing from each and every enemy you kill. Pieces of their armor or exoskeleton will also break apart under gunfire, making the battles feel more visceral than ever.

Since you’ll never run out of ammo, the only thing you need to worry about is the reload time on your weapons. Enemies drop brightly colored loot in the form of armor and weapons boxes, along with health packs. Picking up the armor boxes increases the max health of your current class by 1 and half of the value goes to other classes.

Weapons are randomized but you get better drops on higher difficulties. One major improvement in Earth Defense Force 5 is an upgrade system that enhances the stats of your weapons when you pick up a duplicate. It works wonders for the gameplay loop, which could grow stale in the past when you never found new weapons.

Unless you’re playing cooperatively or online, you’ll probably stick with the Ranger class, but the options are there, and you’ll find weapon drops for other classes this time as well. Speaking of co-op, Earth Defense Force 5 offers local split-screen and up to four players online.

This is where the game shines the most. There’s nothing more satisfying in gaming than grabbing a friend or significant other, a few drinks, and booting up EDF. With the sheer chaos of everything happening on screen, the enemy variety, the fully destructible environments, and the massive bosses, it’s pure distilled fun.

As with past entries in the series, the frame rate can drop pretty heavily when the action gets insane, but even in split-screen, EDF 5 holds up better than prior titles in the series. You’ll also run into situations where you need to kill one last enemy across the map because they got stuck on a tree or something.

It has technical hiccups for sure, but the cheesy charm and satisfying gunplay more than make up for it.

A Step Forward For The Series

Each time a new Earth Defense Force game comes out, I see the series get a little better. EDF 5 offers several big steps forward in the form of its gun upgrading, enemy variety, structured story, and a nice graphical upgrade.

By the standards of other AAA titles, EDF looks like it came out of the past generation, but when compared to the PS4 release of 4.1, this is a nice boost in presentation. It may not be the prettiest game at the ball, but the entire experience feels like a love letter to a simpler time of gaming.

Is it worth the full price? That’s a question only you can answer. For me, it’s a resounding yes. I will spend countless hours playing this in local co-op with my girlfriend and friends who come over. It’s a tradition in my household to play EDF.

With 110 levels, five difficulties, and tons of weapons to unlock, the content is certainly there to justify the price. It may be a little rough around the edges, but Earth Defense Force 5 is some of the most concentrated fun you’ll find on the PS4.

Now, if you’ll excuse me, I need to get my EDF fix.