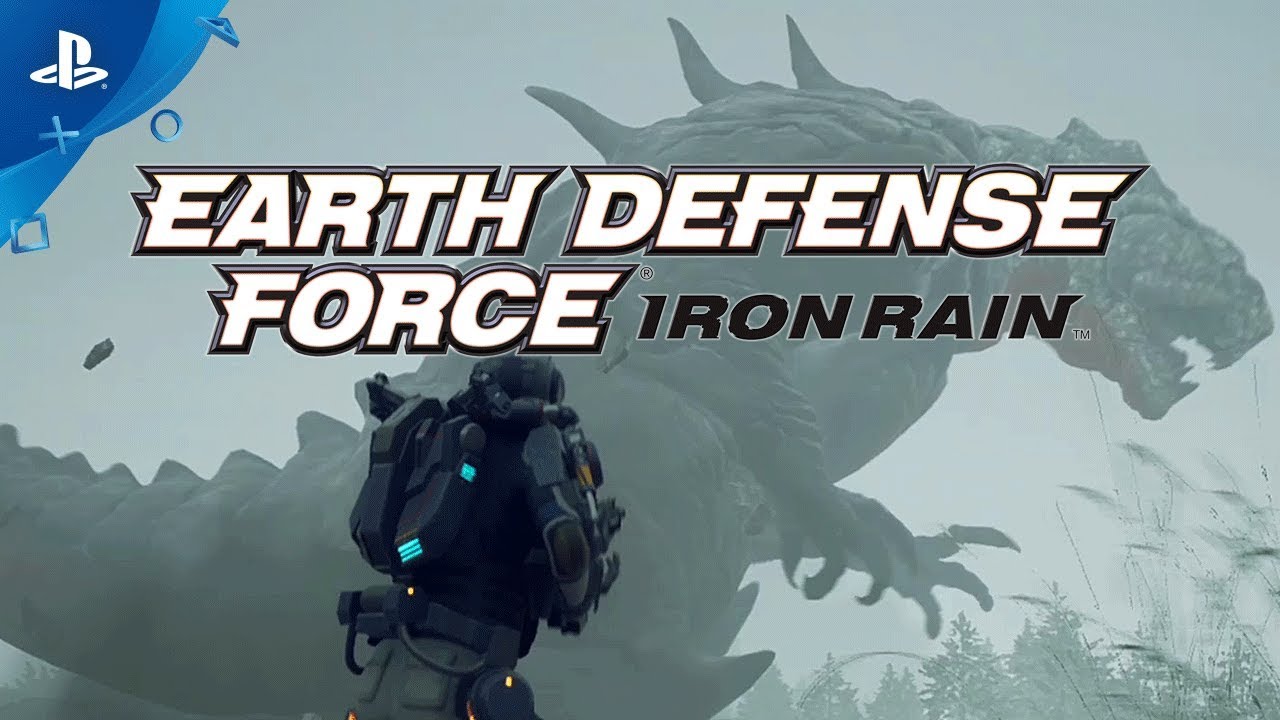 When it comes to my favorite guilty pleasures in gaming, Earth Defense Force is one of the best. These games are often behind the times on graphics, and they often have frame rate issues, but there’s something about them that makes up for all that.

It’s a combination of cheesy dialogue, a collection of gigantic creatures straight out of B-mobie science fiction, and tons of weapons. Earth Defense Force: Iron Rain, a new spin-off title in the series, brings a lot of changes to the table and a new developer. With all of this in mind, does this new title still feel like EDF? Let’s find out.

New Look, New Feel, but is it Still EDF?

The first thing you’ll notice about Earth Defense Force: Iron Rain is the enhanced presentation. While it’s not going to compete with titles like God of War or Days Gone in terms of graphics, EDF: Iron Rain does offer a substantial increase in graphical quality over the other titles.

The story is also more structured than prior entries. You play as “Closer,” the only surviving member of a drastic battle against the invaders, which are called “Aggressors” in this title. Several years after the battle, the EDF is fighting a losing battle on a ravaged Earth.

There are some short cutscenes and dialogue between missions that flesh out the world and some of the characters, but the game still offers a similar level of storytelling to other games in the series. The major difference is that this title tries to be more serious and strays away from the intentional cheese of the other games.

That’s not to say that it isn’t there, Iron Rain does indeed have a sense of humor, but as a friend of mine (and long-term fan of the series) said, “I miss the soldiers singing.” I think this kind of embodies that certain element that Iron Rain’s tone is missing. I realize this was the intention, but fans of the series will miss that element while they’re slaying massive groups of ants, spiders, robots, and kaiju.

Story and dialogue tone aside, Earth Defense Force: Iron Rain does make some improvements and changes that I enjoyed. For starters, the game takes place in areas around the world instead of focusing solely on Japan. This leads to some interesting new environments like European neighborhoods, seaside cliffs, and dilapidated cities ravaged by sand and time.

The environments are still destructible, but the way the models crumble and fall is more interesting than ever, especially when massive enemies crash through them like they’re made of tissue paper.

Speaking of enemies, the usual foes make an appearance here, but there are some great additions to the formula. The giant robots, for example, will sometimes remain off until disturbed, lending some strategy to certain levels. Spiders also received a nice update, gaining the ability to send baby spiders after you during battle and trap you in blasts of web on the ground.

One of the new enemies in the early levels comes falling out of the sky and unfurls into a massive beast. These are especially challenging as they can take a lot of hits to go down. The enemy variety and sheer numbers are here, which is great. They also move with more purpose and weight, which makes them intimidating as they march toward you. Even the ants feel less floaty, which I liked a lot.

Shifting our focus to the gameplay itself, EDF: Iron Rain offers customizable characters, multiple difficulties, several classes, and plenty of tweaks to the formula. Character customization is fun, especially if you come up with something crazy that appears in cutscenes.

Classes make a return, but there’s a twist in the form of an Overdrive ability. You start with two classes, but there are four total. The Overdrive is unique to each class, but you can only use it once per mission. These abilities range from additional speed, unlimited special abilities, and even one class that gets to ride a giant ant into battle.

The ranger class can sprint and dash using the special ability, while the Wingdiver class can fly up and onto buildings for better vantage points. Each class feels more useful and unique than other EDF titles, which is one of Iron’s Rain’s strengths.

Unlike other titles, enemies don’t drop weapons, armor, or health packs in Iron Rain. Instead, they drop different colored gems based on their type. Green gems do still give you health, however, which is great because EDF: Iron Rain can be quite difficult on higher difficulties. I couldn’t find any way to switch between them once I had started a campaign unlike other titles, so I was forced to start over if I wanted to go down a level.

I much prefer the option to tweak difficulty as you move through the campaign. Instead of picking up random weapon drops, you spend the gems you obtain, along with money earned from your score, to unlock weapons in the shop. This is nice because you know what you’re getting, but again, I tend to lean more towards the random weapon drops and unlocks of the prior titles.

Bringing items with you is an option, such as grenades or health packs, but using them deducts points from your score, so it’s a give and take. I liked this mechanic, again, as the difficulty is higher than other titles and health drops are more rare.

At the end of each mission you’re ranked on various factors and your score is given to you as currency for purchasing weapons. This is also how you upgrade your maximum health which is in a separate menu.

In addition to the main campaign (which is split-screen co-op as always), you can also play online and even check out a mercenary mode that offers competitive multiplayer. While it still has the general look and feel of a classic Earth Defense Force game, Iron Rain manages to make some improvements to the formula that I enjoyed.

Even with these changes, though, I still prefer the classic feel of EDF that we had in Earth Defense Force 5. I appreciate the changes in Iron Rain, and I think some fans will enjoy a change of pace, but ultimately it doesn’t replace or ascend past the the main series.

With improved graphics and presentation, Earth Defense Force: Iron Rain is certainly better looking than any other game in the series. The enemy animations, combat, and controls also all feel more weighty, which is a good thing.

When playing in co-op, the frame rate generally does pretty well, but there are times when you can feel it dipping during chaotic moments. This is pretty standard for the series, so it’s not too surprising here.

When you boil it all down, Earth Defense Force: Iron Rain is a bold move for the series that seeks to offer a different take on the classic formula we know and love. While it doesn’t manage to eclipse the sheer chaos and hilarity of the main series, this more serious approach does bring several welcome changes to the table.

In the end, fans of EDF will find a lot to love here, but don’t be surprised if you end up gravitating back to the last mainline release.

A copy of Earth Defense Force: Iron Rain was provided to PS4 Experts for review purposes