When it comes to virtual reality, I am of the mind that these types of games should be weighted differently than their 2D counterparts. For example, an hour in VR feels like more time to me than an hour playing a standard game. The experience is richer, more immersive, and relatively speaking, feels more substantial in the same amount of time.

Similarly, VR has grown a lot since PSVR entered the scene. The standards have changed as more evolved experiences hit the market. Eclipse: Edge of Light started life as a title for mobile VR, and now it’s here on PSVR for all to enjoy. Does it manage to stay relevant among its contemporaries on this new, more powerful platform? Let’s find out.

A Different, yet All Too Familiar Experience

Eclipse: Edge of Light opens with a familiar premise. You have just crash-landed on an alien world and the only thing you have to your name beyond a broken ship is a mysterious relic called the Artifact.

Your goal, as with many exploration puzzle games, is to seek out answers. From a narrative standpoint, it’s the mystery that drives you forward in Eclipse: Edge of Light. That mystery starts out fairly vague, but gains traction in the latter half of the game.

The story is delivered to those who look for it, so someone could easily play through without ever really knowing what happened prior to your arrival. As someone who relishes in storytelling within video games, I stopped and used the scanning mechanic on every statue or tablet I could find.

Using your head, you’ll project a beam and paint the light across the surface of certain objects in the game. This opens up a dialogue box that translates the text for you to read. These snippets paint the backstory of the planet and the purpose of the Artifact that you carry with you.

They’re short, to the point, and well-written. It’s vague enough to keep you thinking, but also give you things to think about as you explore. The more relevant storytelling is written on the walls themselves, making it hard to miss certain plot points.

Over the course of 3 or 4 hours, Eclipse: Edge of Light tells a story that incorporates some interesting elements, but it never dives too deep into the world you’re exploring. I think the developers struck a good balance between overly wordy exposition and a story worth telling, but I would have liked to see more detail to flesh out some of the lesser-used elements.

For example, there’s a cloud of black smoke that appears and ominously follows you through your adventure, but it’s never really outlined what it is or where it came from (though you can infer certain things). There’s also machinery throughout the world that resembles things like oil pumps that I feel like could have been used to greater effect to draw parallels between this planet and our own.

The ending, while interesting, also feels like it could have been one of several outcomes if you were given a few choices near the finale. As it stands, the story for me has the hallmarks of a thought-provoking science fiction epic, but it doesn’t capitalize on some of its more promising ideas.

Gameplay in Eclipse: Edge of Light ranges from exploration to puzzle-solving. The game is played with a DualShock 4 (no Move support), so the controls are pretty simple and easy to grasp for any skill level.

To throw the Artifact, you’ll hold the R2 button and make a throwing motion with the controller as you release the trigger. The tracking here is excellent, and the sphere often goes exactly where you intended, which is rare when throwing things in VR.

You also have a jetpack that lets you move around the environment. It’s incorporated into certain traversal puzzles too, which offer a few harrowing moments as you float above certain death.

The puzzles won’t really stump you, but they are engaging, which is the most important part for me. Like the story itself, the gameplay gets more interesting as the title goes on and you find more interesting mechanisms and dangers to work through.
The Artifact can is used to break things, trigger switches, move heavy objects via a force pull of sorts, and reveal hidden objects. Breaking various objects in the environment lets you gather dust which powers pedestals that in turn offer a little more detail to the story and world-building.

The looking glass mechanic where you hold up a frame and seek out hidden objects or pathways is one of the more unique mechanics that I really enjoyed. The Artifact glows green when this option is available, and while it’s only required a few times, it can also reveal objects that hint at the greater story.

I think Eclipse: Edge of Light could have used a stronger opening, as the latter half of the game was far more interesting for me. The story could have dived deeper into some of its themes, and the puzzles could have been more difficult.

To those who worry about things like comfort, you’ll be happy to know Eclipse: Edge of Light allows for smooth turning, snap turning, vignettes, and always lets you fall slowly when you’re descending from jump. I didn’t have any issues with motion sickness here at all.

All of this simply means that the game is very solid, but fails to truly carve out a place for itself among many other explorative puzzle games on the platform. A few technical issues like a frame rate stutters and one puzzle that didn’t work properly until I reloaded a checkpoint also broke the immersion a few times for me. 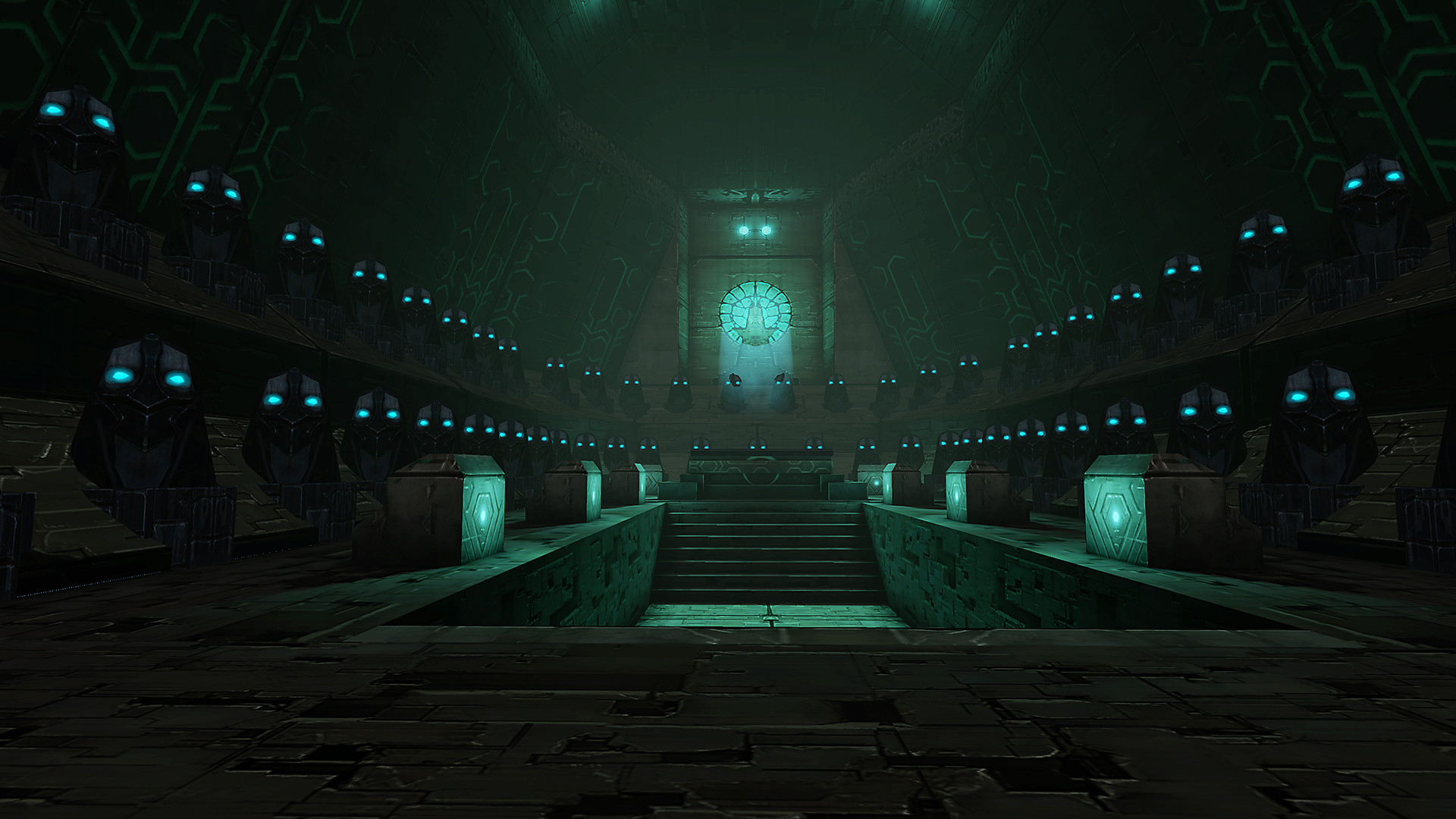 From a visual standpoint, Eclipse: Edge of Light dances between environments that are simple “fine,” and wonderful moments of creative and artistic brilliance. One moment, you may be walking through a corridor of trees that unfurl and stretch into the sky, while the next you’re simply flying through a bland canyon.

This is again something that gets better as the game goes on. In the second half you’ll encounter an area that takes you through a gauntlet built on the backs of indentured workers, and it has some of the best level design in the whole game, with moments of awe and claustrophobia in equal measure.

As far as the soundtrack goes, I think it goes a long way towards bringing the atmosphere to life. Since we’re working with relatively low-budget graphics, art and music carry much of the burden to make it all feel immersive. The art delivers in moments like the one I described above, but its the soundtrack that lends that extra layer of uncertainty and mystique.

The tracks in the game are mostly ambient in nature, never straying too far from set dressing in music form, but for a game about exploring an alien world, that works. Hollow ringing sounds, dissonant chords, and long stretches of distant notes help sell the feeling that you’re exploring the deserted halls of a once proud civilization.

Eclipse: Edge of Light is the kind of VR game that would have blown my mind back when PSVR first released. The issues I mentioned would have still been valid, but its atmosphere and worldbuilding are a testament to what can be done with a minimalistic approach and some great art design.

In today’s VR world, it may not set the world on fire, but that doesn’t stop it from being a journey worth taking. For the asking price, I would certainly recommend it to those just starting out on their VR journeys. You won’t regret it.

A copy of Eclipse: Edge of Light was provided to PS4 Experts for review purposes.