Pairing up a main character with their own animal companion in a game is a bold move. After all, if you have something you need to take care of, the developers need to make sure they add to the experience instead of taking away from it. No one likes a weak companion and constant escort missions, for example.

Video game sins aside, Outer Loop Games’ first title, Falcon Age, takes us to a brand new world where we play as Ara. After coming into possession of a baby falcon, Ara begins a journey that takes her across the world to fight back against robotic colonizers, all with her trusty bird by her side. Does this ambitious concept soar, or did ambition clip its wings? Let’s find out.

An Instant Connection That Never Fades

Falcon age is playable on both a standard television with a DualShock 4, or in PSVR with two Move controllers. We’ll compare the two options shortly, but for those who want a quick opinion, VR is absolutely the way to go.

Regardless of how you choose to play Falcon Age, you start the game in prison. Shortly into the experience, you meet a baby falcon that you’ll need to take care of going forward. Things start out simply as you feed the bird with your daily rations and bring it out with you as you perform daily work for your robotic overlord.

After the opening, Ara is reunited with her aunt and learns more about her family’s lineage as falcon hunters. You soon join with a resistance to take the fight to the robots and preserve your way of life in the process.

It’s a strong concept for a story, and Falcon Age does manage to tackle some pretty heavy themes across it’s 4-5 hour playtime. It ultimately left me wanting more, but the various characters, lore, and dialogue options gave the world a nice sense of place.

Given that Falcon Age is the first title from Outer Loop Games, what story the game does have is unique and impressive. Like many other elements of the title, it feels like the basis for something they could expand upon in a potential sequel.

Now, let’s talk gameplay. As I mentioned earlier, PSVR is the absolute best way to play Falcon Age. It all starts with the sheer immersion. The ability to pet the bird, interact with it, and watch as it lands on your outstretched arm in virtual reality makes it feel like a creature you could reach out and touch.

Combat also benefits greatly from PlayStation Move controls, which give you the ability to crack the whip on your electric baton and beat down robots using physical movements. The tactile nature of it all, combined with the sharp graphics and positively superb animation on the falcon allow VR to bring this world to life in a way a screen never could.

Playing on the TV isn’t bad per se, in fact, a dedicated button on the controller lets you do things like hold the bird, shake its talons, and even fist bump with it. Falcon Age doesn’t lose its charm on a standard screen, but the whole experience feels like it’s missing something when you’re not in VR.

The game has a large world for you to explore, with objectives to keep you grounded and several activities to mix things up. In an interesting move, Outer Loop Games also offers a separate mode where you play the entire campaign without combat. The robots are still there, but they don’t bother you. It’s actually really refreshing to offer this for people who would rather just have fun interacting with the bird.

Speaking of interaction, there are plenty of ways to bond with your falcon. A specialized hat even lets you keep it as a baby if you prefer the smaller look. You can dress up the bird with different accessories and hats as well. Even toys make an appearance, offering hilarious interactions beyond the standard choices.

When playtime is over, your Falcon is also incredibly adept at assisting you in combat and hunting. Whether you’re gathering plants or taking down rabbits, you simply need to point and let the bird do the rest.

Various recipes allow you to make treats at your aunt’s tent and provide buffs to your Falcon (which you also get to name shortly into the story). Combat involves different strategies for varying enemy types. It usually involves either stunning them with your baton or having the bird do it before you deal the finishing blow.

The bird does take damage, so you’ll need to consider things like turrets and enemy types before you send it into battle. There’s something heart-wrenching about pulling darts out from its bloodied fur and then eagerly encouraging it so its health restores to a set amount.

Other options also include handing your bird bombs and directing it to drop them upon turrets to disable them, so the combat does offer some depth and variety. My overall experience with Falcon age was really positive, but I did hit a really bad glitch in my first playthrough that forced me to start the game again from the beginning. Every time I tried to name my falcon, the conversation would stop and I would be unable to interact or move. Restarts did nothing to fix the problem.

The the latest patch for the game mentions this problem has been fixed, so it shouldn’t be an issue for anyone who plays Falcon Age with the latest update installed, but I felt it was worth mentioning. In addition to several other fixes, the patches released have also added new hats and toys to the game, free of charge, so it’s important to note that Outer Loop Games have their hearts in the right place.

As the first title from a new studio, Falcon Age an incredibly impressive effort. The amount of detail in the falcon alone is enough to put veteran studios to shame. It may not have a ton of depth in the gameplay or storytelling, but this game in VR is an experience everyone will enjoy. 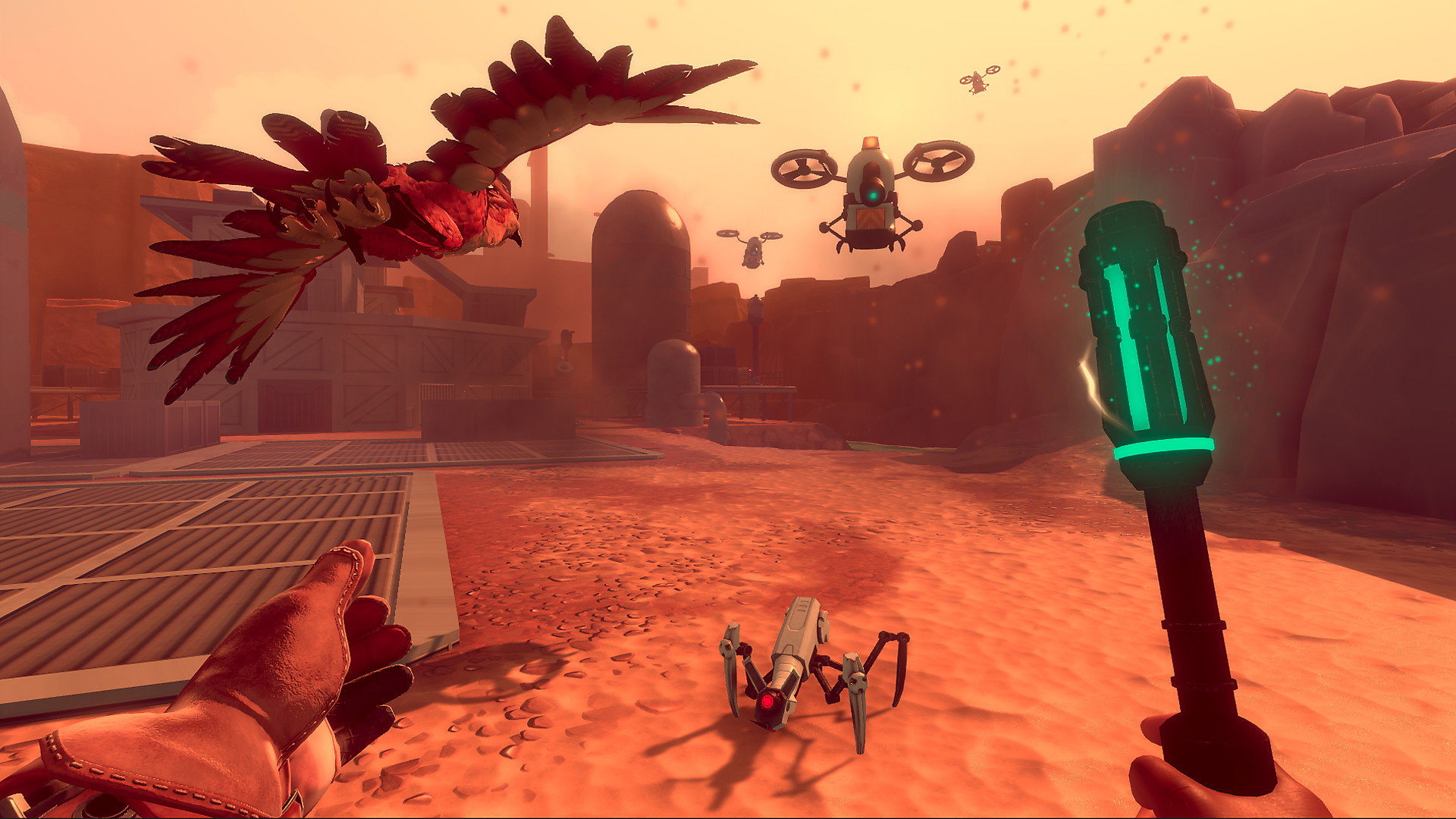 The art style in Falcon Age utilizes vibrant color to really bring the world to life. People, enemies, and the falcon especially are all very well animated. Voice acting is sparse and relegated to your aunt, who seems to talk at random intervals.

The environments themselves are pretty simplistic, with basic textures even for this type of style. Again, though, the bird is absolutely perfect, so it’s clear that the team had their priorities straight.

For those who own PSVR, Falcon Age is pretty much a no-brainer, but those who only have access to a TV should consider how much they want to experience the game in a less than ideal format (thought with the falcon, no one would blame you for taking the dive). In either case, I am extremely excited to see what comes next from this talented developer.