It's very rare that we stop to think about how our choices affect others. As we walk through life, everything we do create ripple effects into the lives of others. These effects last long after we're gone, both literally and figuratively, but in the chaos of daily life, we never stop to think about things like this.

Fragments of Him is a game that slows down everything and asks you to walk through the life and death of a young man named Will. Does this game offer a compelling and emotional glimpse into the nature of life and death, or does it get too caught up in its lofty ideas? Let's find out!

A Strong and Powerful Story With a Little Too Much Fluff

Fragments of Him is a game that is almost entirely focused on telling a story. The game is linear, and there's no major decisions or even shocking mechanics to be found. It's a game entirely devoted to the act of telling an interactive story.

When I first started Fragments of Him, I expected three things: that it would be short, emotional, and focused on Will's death and the aftermath.

I was pleasantly surprised to discover that the entire experience lasts several hours, instead of being over in a flash. This was both a good and bad thing. Emotions most certainly ran high, one scene, in particular, forced me to put the controller down and switch to something else for a while as it hit too close to home.

My third expectation was also thrown on its head. Instead of focusing solely on the death of Will and its aftermath, the game's story instead spends a good chunk of its time showing you what kind of person Will was.

I knew nothing about this man going into the game, but by the end, I felt like I had been good friends with him all his life. The game uses perspective to great effect, offering long segments where you see events from the perspective of his grandmother, his girlfriend, and his current boyfriend.

Will's life isn't full of adventure or action, but his struggle to find himself, understand himself, and ultimately find out what matters most in life was absolutely incredible.

The game opens with the fateful day where Will loses his life and then rewinds so we can live Will's life up until that point. It even goes past that day to show how his death affected everyone we've gotten to know from each of their perspectives.

This cohesive approach to the story forces you to become invested. Despite being stone-faced through the first half of the game, when I saw how these people I had come to know were affected by Will's passing, it deeply affected me too.

I felt grief. Real, raw, and powerful grief. It was as if I had lost a dear friend, and now I was watching other people I cared about struggle to understand life without him.

On the whole, Fragments of Him's story deeply affected me and pulled me in until my own heart was on the line, at which point it proceeded to shatter that too.

Even so, the story isn't perfect. There are several segments that either drag on too long or don't seem needed. Had the story been trimmed somewhat to improve the overall pacing, I think the overall message could have been more powerful and concentrated.

The story takes center-stage in Fragments of Him, but there is gameplay to move things along. You can walk around the game's environments and interact with people or objects to trigger events.

As a silent observer, the story plays out before you without any option for you to interact with it. It's an interactive narrative in its purest form. You won't find any hidden collectibles or anything of the sort either.

Being able to explore and trigger story moments are your leisure is a nice way to interact with the world and offers you the chance to take everything in and pause for reflection between beats.

Colored outlines will show you what can be interacted with. They change color as you approach, letting you know when you've reached the minimum distance to select it.

There's not much else to be said about the gameplay here. It works perfectly well, and there are some cool moments where your interactions don't have the usual effect (which I won't spoil here). I liked that it was simple and easy to engage with the story, while also offering you control over how quickly you want to experience everything. 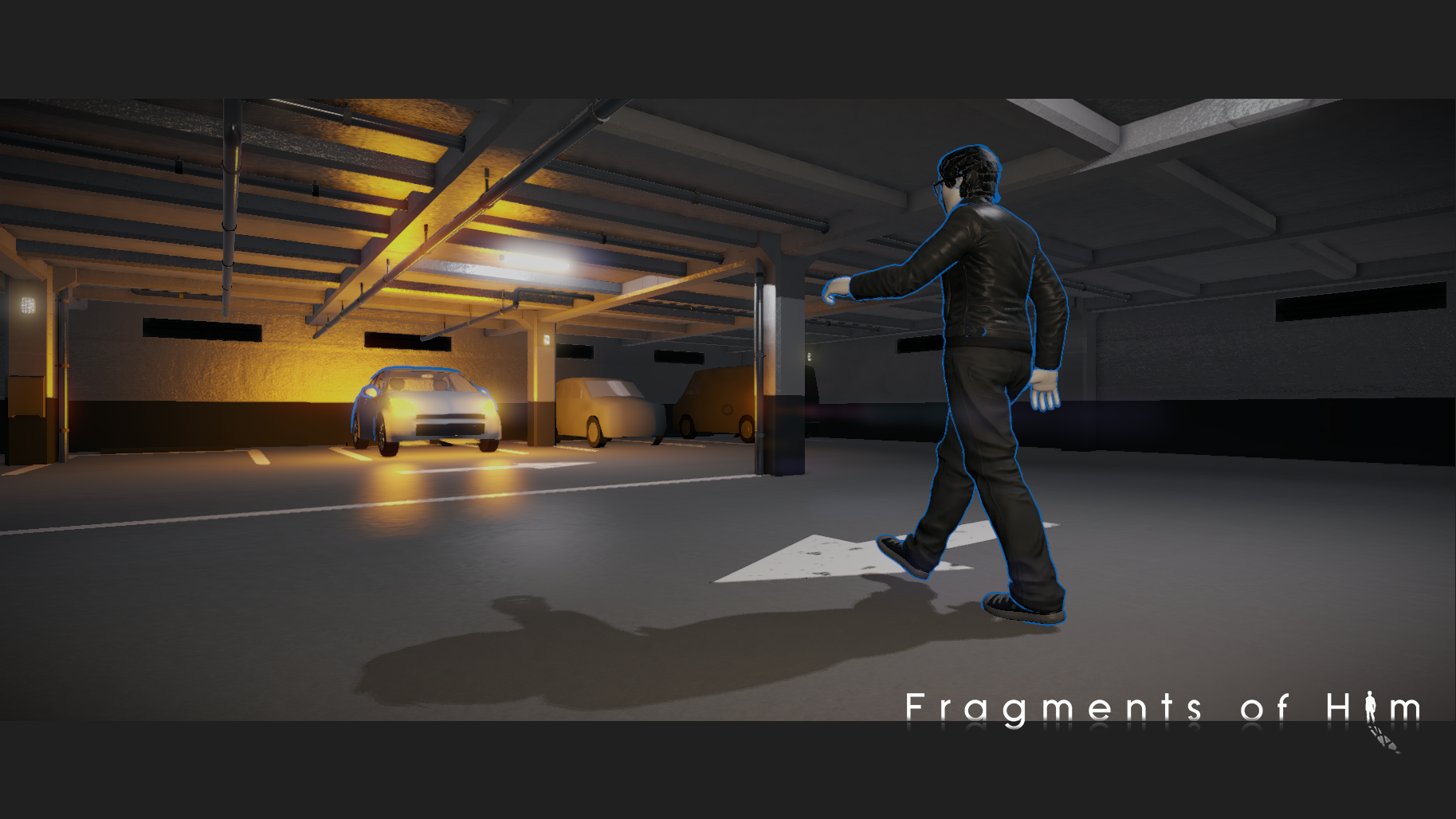 The presentation in Fragments of Him is minimalistic, but still has a distinct style. The environments and characters don't have a lot of detail, but there's certainly enough to get the point across.

Even the blank faces of characters that lack any detailed facial features don't take away from the impact. It goes to show that you don't need fancy animation to make your characters expressive. Here, the excellent voice acting conveys all the emotions you could ever want from a narrative.

The soundtrack is both somber and melancholy like you would expect, but it does have dots of hope in there from time-to-time. The wonderful pairing of piano and strings creates heart-wrenching melodies. It's the types of sounds I imagine you would hear if you took a bow to your heartstring. Wonderful audio all around in Fragments of Him.

With a game like this, I base my review and ultimate score on the emotional impact more than anything, because that's the goal of a narrative like this. While it is more padded than I would have liked, the widespread scope of the story that covers the life and death of Will and the lives of those around him was absolutely engaging for me.

The game's emotional climax left me in tears. For others, it may not have that same level of impact, but there's no denying the artistic and narrative talent on display here. Fragments of Him could have worked as a movie, or a book, but as a game, it truly shines.