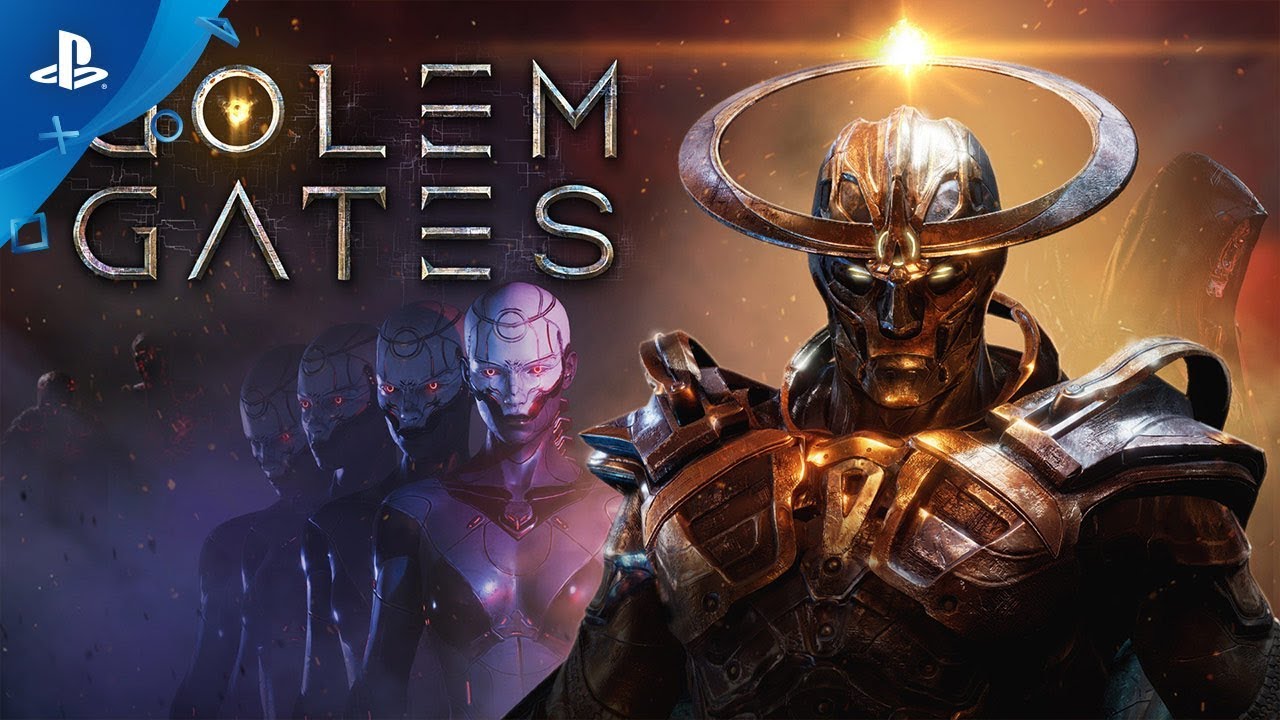 Real-time strategy, or RTS, games have slowly but surely been making a name for themselves on consoles over the last few generations. It’s gotten to the point where a new game needs to differentiate itself to stand out. Golem Gates seeks to do this by offering a deck building mechanic that drives both your units and the flow of combat.

Does this mashup of strategy and card-based combat mesh well together, or should you leave these gates shut and move on? Let’s find out!

A Gateway Game to Multiple Genres

I’ve played plenty of RTS games in my gaming career, but Golem Gates managed to make me look twice when I saw that it utilized a card-based combat mechanic. It also helps that the game’s edgy sci-fi art style grabbed my eyes as well.

If you dive into the main campaign, Golem Gates remains very stingy on story details until the second act of the campaign, which is odd because the style begs explanation. Even when things pick up the story is enough to justify the missions, but doesn’t offer enough insight into your character “The Harbinger” or the greater world as a whole.

RTS games are rarely known for their stories, but I always hope to see more from the genre, especially when the world and art style makes such a bold first impression. I will say that I actually really liked the whisper style narration as it added a sense of intrigue to each cutscene. It’s a unique type of narration compared to the usual gravelly voice or deep booming narrator.

Gameplay in Golem Gates combines a deck of cards, or “glyphs” and real-time strategy. Instead of putting down roots, you move the Harbinger themselves as a sort of mobile base. You generate energy automatically, but capturing points on the map will increase the rate at which regeneration occurs.

Glyphs are randomly dolled out into your hand from the deck, allowing you to spend energy to deploy units, powers, traps, and turrets. You do this by manipulating Ash, which the enemies are also using to control the Golem Gates themselves. As the grim hero of this broken world, you’ll often find yourself destroying the gates, capturing generators, or on occasion collecting parts to build a golem yourself.

While the mission objectives could have used some more variety, the moment-to-moment gameplay is easy to grasp and fun to jump into. Since you don’t know what cards you’re going to get (beyond the scope of your deck as a whole), you’ll want to save powerful cards for when you need them.

There’s also the strategy of dumping your units onto the battlefield, which works to an extent, but the random dispersal of cards means you can run out of useful ones pretty quick based on your deck’s ratio of different card types. This results in the need for strategy both inside and outside of the battlefield.

When you run out of cards to use, you’ll be unable to defend yourself or your troops for fifteen seconds while the deck is reshuffled, so you need to plan you plays accordingly and not blindly throw down cards when you have energy. One thing that did bother me about the card mechanics was the fact that you could damage your own troops with large area-of-effect attacks.

This would be fine, except for the fact that the units look incredibly similar across both sides of the conflict, which resulted in me damaging my units more than I would like.

Without any microtransactions to speak of, you’ll have no excuse not to earn more cards and balance your deck accordingly. Beyond the campaign, you can also check out a survival mode, a trial mode, and of course, online multiplayer with several options to choose from. The other single player modes offer different rulesets and challenges to try your hand at with the deck you’ve built.

A Sharp, but Unvaried Presentation 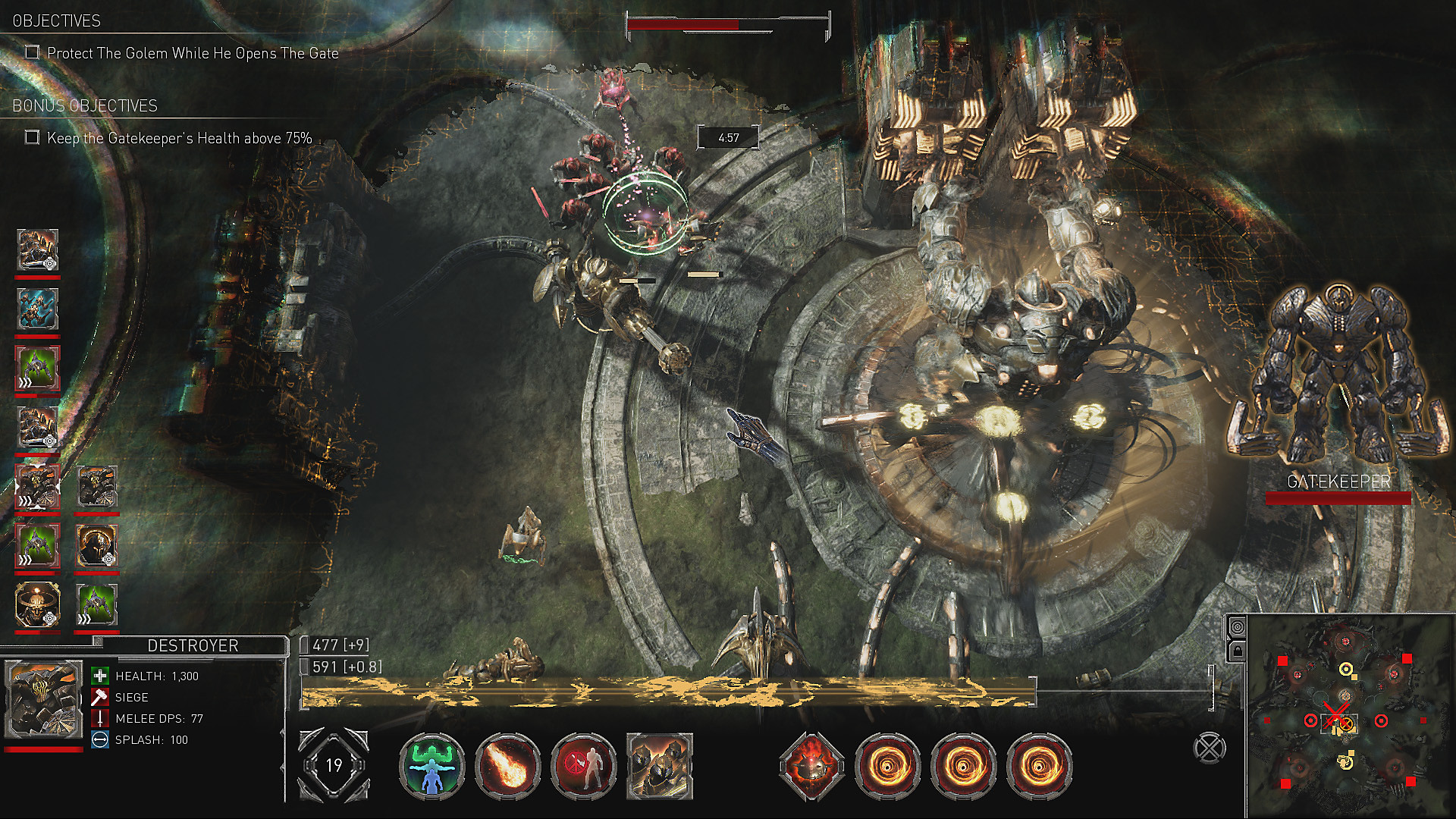 Golem Gates is a sharp and shiny looking post apocalyptic sci-fi title, but the presentation is not without flaws. I liked the character designs, but the environments themselves are too much of the same to really stand out from one another. The fog of war is also quite aggressive here, obscuring much of the view when you’re exploring.

I wanted to see more of this world, especially with the wonderful particle effects used in a variety of cutscenes and in combat. It’s a gorgeous game in a lot of ways, but it doesn’t do enough with that style to capitalize on that potential.

Those who want something new from the RTS genre will find a lot to like about Golem Gates. While the multiplayer isn’t as active as I would like, there’s enough single player content to keep you busy for a while here. The combination of genres isn’t without some issues, but the overall package is absolutely worth a look.