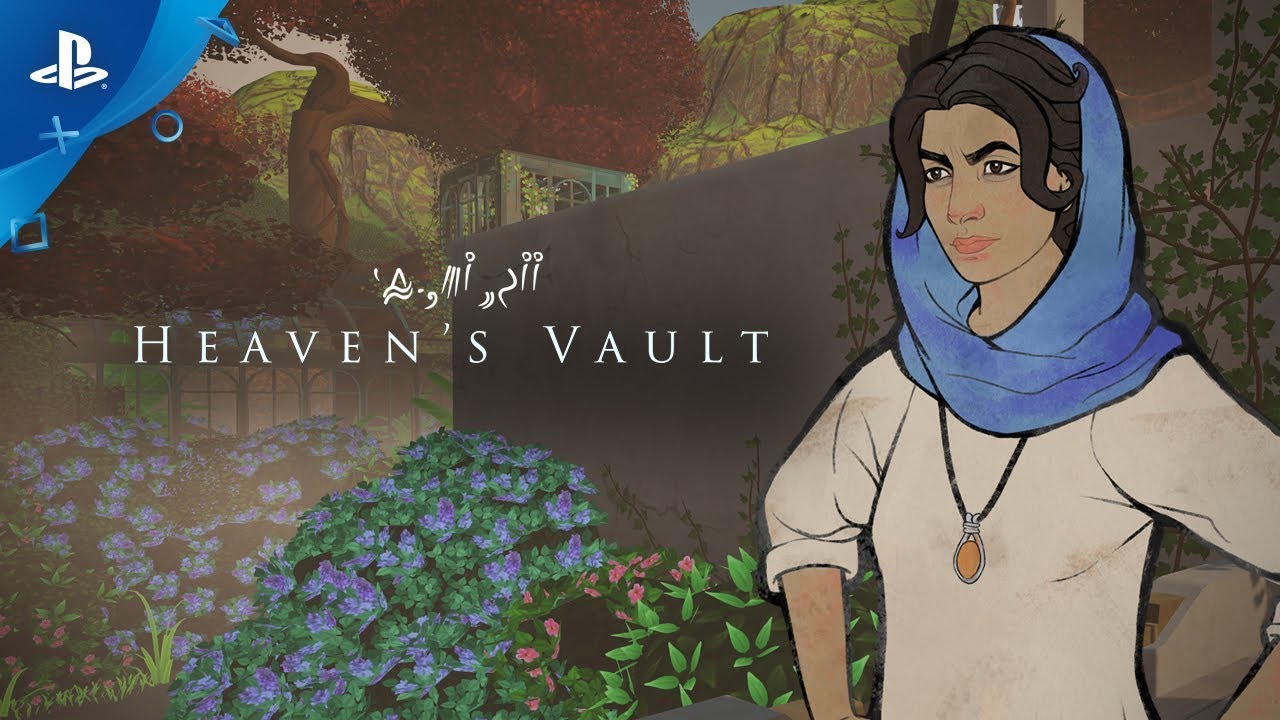 They say that every story has already been told. It’s true that the hero’s journey can be stretched to fit any modern tale, but that hasn’t stopped developers from creating some truly stand out experiences on the PS4 unlike anything else I’ve ever played. Suffice to say, Heaven’s Vault is most certainly one of those games.

You play as Aliya, an archaeologist who sails the rivers of stardust in a massive nebula searching for a missing person, while also decoding an ancient language along the way. When was the last time you unearthed a forgotten tongue? Yeah, been a while for me too. Let’s find out if Heaven’s Vault’s unique concept is enough to elevate it to holy status.

A Breath of Fresh Air

The last time I had to unravel the meaning of an unknown language, I was very young and foolishly trying to play Riven on the PC without a strategy guide. I eventually purchased one and sailed through the game’s puzzles (which were admittedly over my head at the time), and loved the world it created.

At one point during that classic adventure title, you were tasked with essentially playing a children’s game to learn the basic symbols of a fictional language. You needed this knowledge to solve puzzles later in the game, and that concept alone blew my tiny mind.

Now, Heaven’s Vault is here to take that concept to the next level, and the level after that. The game takes place in a nebula where people use ships with vast wings to essentially ride currents of stardust. As Aliya, you are tasked with finding a missing person, but your true passion is uncovering the past.

Very early into your journey, you’ll come across some strange symbols that resemble simple hieroglyphics. The first time you’re faced with these symbols, you have no knowledge of what they mean, but you can make some educated guesses.

Once you’ve made your guess, it will remain attached to that symbol or string of symbols until you either solidify your answer by using it in other sentences, or you finally prove it wrong. Aliya makes this decision for you, so you don’t need to worry about learning a word incorrectly.

Before we dive too deep into the language of Heaven’s Vault, let’s talk story. Aliya herself is a strong, opinionated character who doesn't’ fall in line like those around her. On the planet of Iox, the people are all invested in a belief known as The Loop where everything that has been lost comes around in another form.

Similarly, the same goes for negative events. History repeats itself as it were. This belief fuels part of your journey, but Aliya herself isn’t buying it. As part of the dialogue options, you have some flexibility in how brashly you want to express Aliya’s opinion, but ultimately she’s someone who doesn’t fit into the mold others have for her.

She’s also joined by a robotic companion who she calls “Six” for reasons you’ll figure out pretty quickly. Six is the voice of reason in the game, always advising caution when I wanted to take the leap (quite literally in many cases).

Even so, I found myself attached to the robot, mostly because we found ourselves alone for stretches of time on forgotten worlds and the game allows for casual discussion between the two based on your situation.

That’s not to say Aliya and Six are lonely, however. Heaven’s Vault is filled with characters, some of which are more interesting than others. I appreciated the amount of freedom the game offers when conversing with locals on various moons, but sometimes I felt the conversations dragged on a little too long.

An example would be a dealer on a market moon who sold geckos are her primary stock. It was nice to have the option to talk to her, but her insistence on selling me a gecko got old after a while and I longed for a way to exist the conversation.

Heaven’s Vault certainly has a lot of things to say. Whether it’s conversations between Aliya and Six, observations about the world around you, or points of interest to interact with, the game has shortage of things to do.

It also catalogues everything you do on a timeline, which I thought was interesting. When you discover past events, it also logs them correctly based on the date they occurred. This type of bookkeeping also extends to the story, which offers a quick “previously on…” style summary every time you boot up the game. Seeing as how you see and do a lot in Heaven’s Vault, I appreciated this a lot.

While I did feel I had some control over events and dialogue, Heaven’s Vault doesn’t offer wildly different paths for those who want to lean heavily one way or another. Overall, Heaven’s Vault offers a rich and fairly large world to explore, with plenty of opportunities to learn more about its history.

There are plenty of side areas as well, but I found it difficult to know the difference between the main quest and optional objectives, so I did everything I could. The story itself is quite interesting as well, but there are stretches where the pacing falters and I felt my motivation waning.

Despite the moments of slow development, I always enjoyed discovering a new world and, specifically, new elements of the language I sought to uncover. This brings me to the core mechanic of Heaven’s Vault. 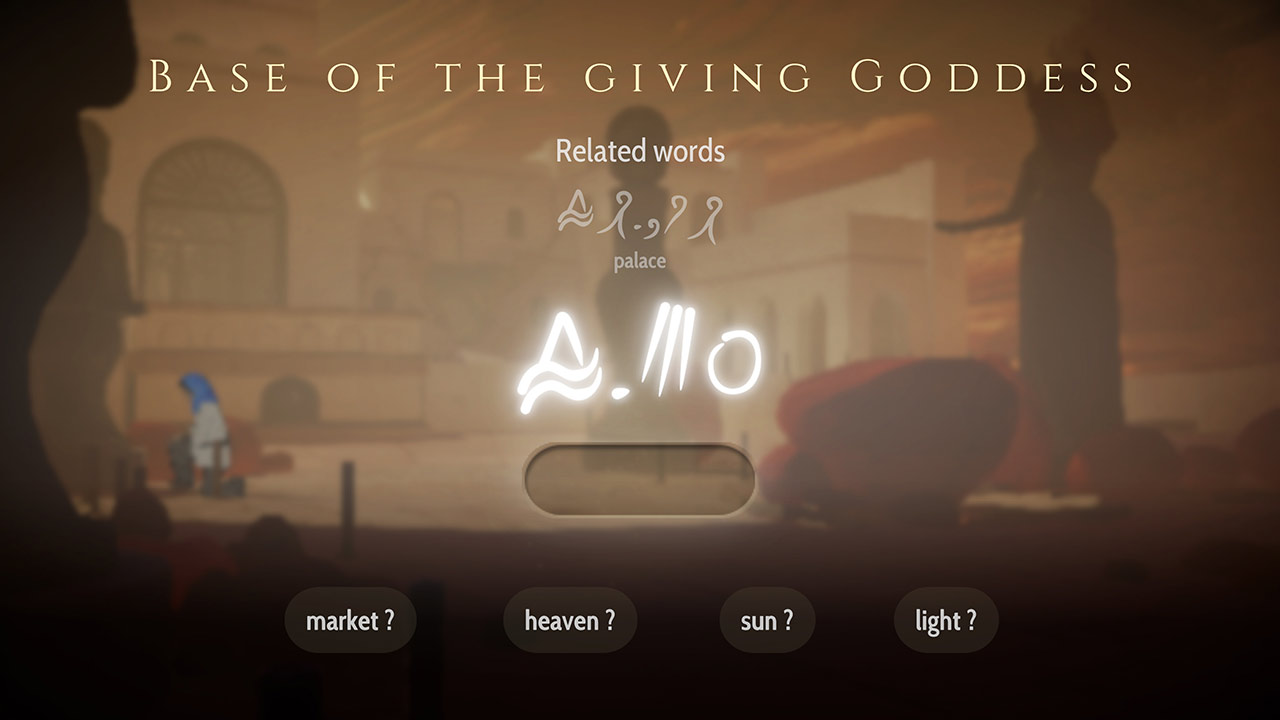 The simple act of identifying, solidifying, and expanding your knowledge of a forgotten language is something that, as a writer myself, never got old in Heaven’s Vault. The symbols used to denote letters and words are beautiful, but they also have a shared motif that allows you to make smart guesses about what similar phrases could mean.

The game does offer similar words you’ve discovered as well to help steer you in the right direction, but when you first encounter a string of symbols, it lets you decide what the best word may be. Later on, after seeing it several times, Aliya will comment whether she’s confident in the meaning, or if you need to guess again.

It’s the perfect balance between freedom and structure for me. At first I was terrified. What if I was wrong? Fortunately, this fear faded as Aliya’s confidence grew (along with mine). Beyond solving these language puzzles, you’ll also sail among the stars in beautiful rivers of stardust.

As of this writing, Heaven’s Vault received a patch that allows you to pass the control to Six during stretches of river you’ve already travelled. This is nice because the travel can become tedious after a while, and some of the trips are quite long.

Another excellent addition is a new game plus that allows you to play through the game a second time with your dictionary intact and the word puzzles even more complex and difficult than before. This essentially allows you to expand your knowledge of the language even further.

Heaven’s Vault may not be for everyone, but for those who are craving a story-based experience that does something wholly unique, this title is exactly what you’re looking for. 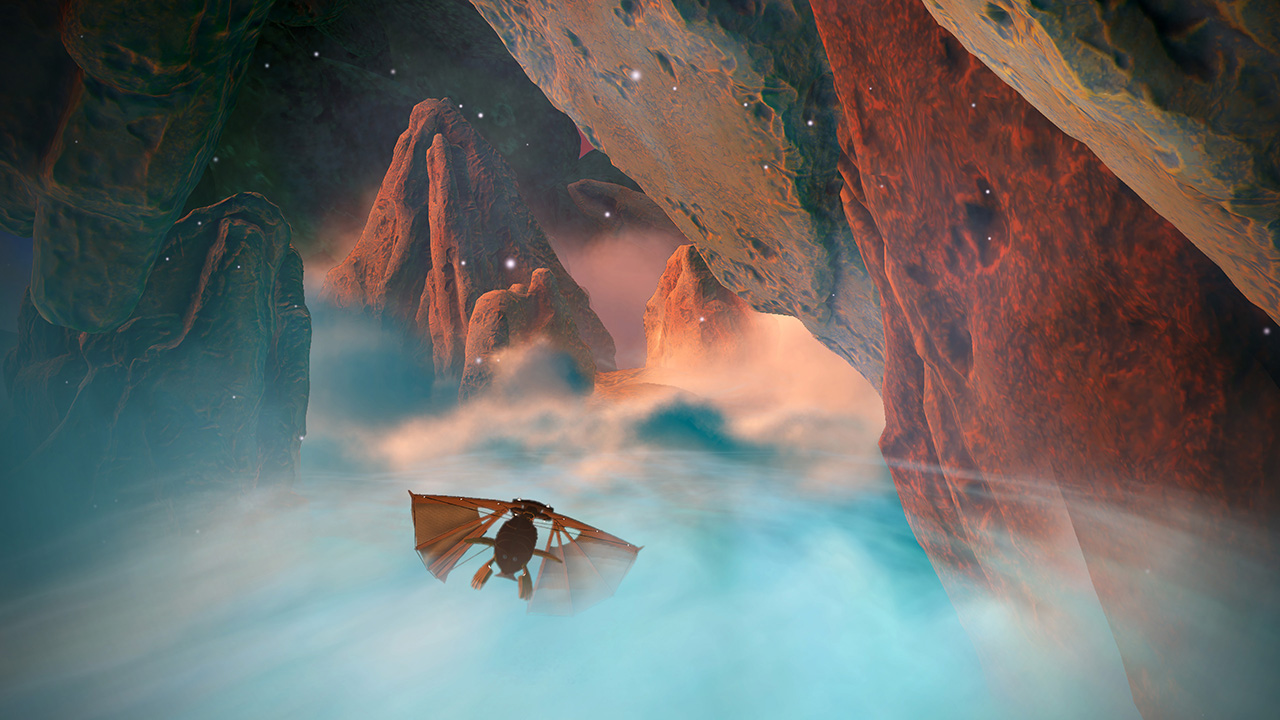 Heaven’s Vault employs a combination of 2D characters and 3D environments for an interesting look. Your character moves with limited animation, but there are plenty of facial expressions during dialogue that help convey emotion. While much of the dialogue is delivered via silent text, you can adjust the text speed, which I always appreciate.

Occasional moments offer narration from Aliya herself, which I really liked. It would have been wonderful to have fully voiced dialogue, but with the sheer amount of text in the game, I can imagine that would have been quite the endeavor.

From a music perspective, Heaven’s Vault features a robust soundtrack from composer Laurence Chapman. Given the size and scope of the game, along with its beautiful art, the music provides a relaxing and appropriately classical backdrop.

The combination of fluid piano melodies and lofty strings really stand out during the moments where you’re sailing through the stars on these ethereal rivers that stretch on into the horizon. It’s these moments that Heaven’s Vault offer quiet reflection and lets you bask in its truly gorgeous world.

They say that all stories have already been told, but Heaven’s Vault proves you can still weave a tale that is not only unique, but pairs itself with a gameplay hook unlike anything else I’ve experienced. I relished in slowly unraveling the mystery behind this world, and if you’ve ever wished you could be an archaeologist, Heaven’s Vault is absolutely a game for you.