Virtual reality has come a long way in recent years. Between PSVR, Samsung VR, and even Google Cardboard, just about any device you own these days has some kind of VR solution. As a result, we’ve seen a lot of mobile VR experiences making their way to the PSVR, and the results have been interesting. In some cases, mobile VR experiences are extremely well done, and others simply try to make a quick buck.

Today we’re looking at Heroes of the Seven Seas. Originally on the Gear VR, this pirate RPG is now on the PlayStation VR headset. Does it sing you a song of the high seas, or is this title going to make you seasick? Read on and find out!

A Pirate's Life For Me?

The story in Heroes of the Seven Seas is simple, but also heavily influenced by anime. From the art style, to the over-the-top writing, it has this inspiration in mind throughout. You play as a pirate seeking a powerful treasure.

Its set up the premise nicely, but beyond some character backstory and dialogue with other NPCs, it never truly comes into its own. Instead, this short 1-2 hour experience is more about providing elements of a pirate RPG in VR.

That concept on its own is amazing, and Heroes of the Seven Seas works really well as a proof of concept. It’s a shame that the story isn’t more involved. If it were to pull from contemporary anime more, it could have really leaned into the unique elements today’s anime series are known for.

Instead, we have simple exposition and mild dialogue from characters that you come across. It’s serviceable, but it could have been more involved. I would have liked more involved characters and a stronger, more in-depth story. Even if it was only ever meant to be a few hours long, they could have taken it a bit deeper here.

Even so, the concept is right on target. Let’s talk about the gameplay.

Glimmers of a Diamond in the Rough

Heroes of the Seven Seas is priced appropriately for its short adventure. Even though it ends too soon, some of the gameplay concepts here have a lot of potential. When you’re on land, you’ll move around via teleportation (no option for smooth movement). You can talk to NPCs and explore at your leisure. On land you’ll also have the option to upgrade aspects of your ship or change your ship entirely. These light RPG elements are pretty cool in VR, but it would have been awesome to do other things like recruit crew members and learn more about them. Or, get into a bar fight and fight it out in the streets.

None of these things are possible on land. When you take to the sea, however, the game really opens up. By default, there’s a comfort mode that masks your peripheral vision when you turn, but I don’t like things like that, so I turned it off. Oddly enough, you have to do this every time you change scenes. It doesn’t stay turned off for some odd reason.

The game situates you at the helm of the ship, looking out onto the deck and bow. To aim, you simply look in each direction and move your head to adjust the trajectory of your shots. This feels pretty good, and offers excellent accuracy. You’ll steer the ship with your controller and do battle with others on the high seas.

The ship combat is undoubtedly fun, and finding new crew members or loot is a great incentive to do battle. Ramming another ship, or sending a volley of cannons into an enemy is always awesome in VR. Again, though, it feels sparse and simplistic. I would have loved more engaging combat, or just more combat in general.

Beyond this, there’s some light gun combat where you aim by looking and fire your flintlock pistol at oncoming enemies. The majority of your time will be spent on the sea, where you belong. 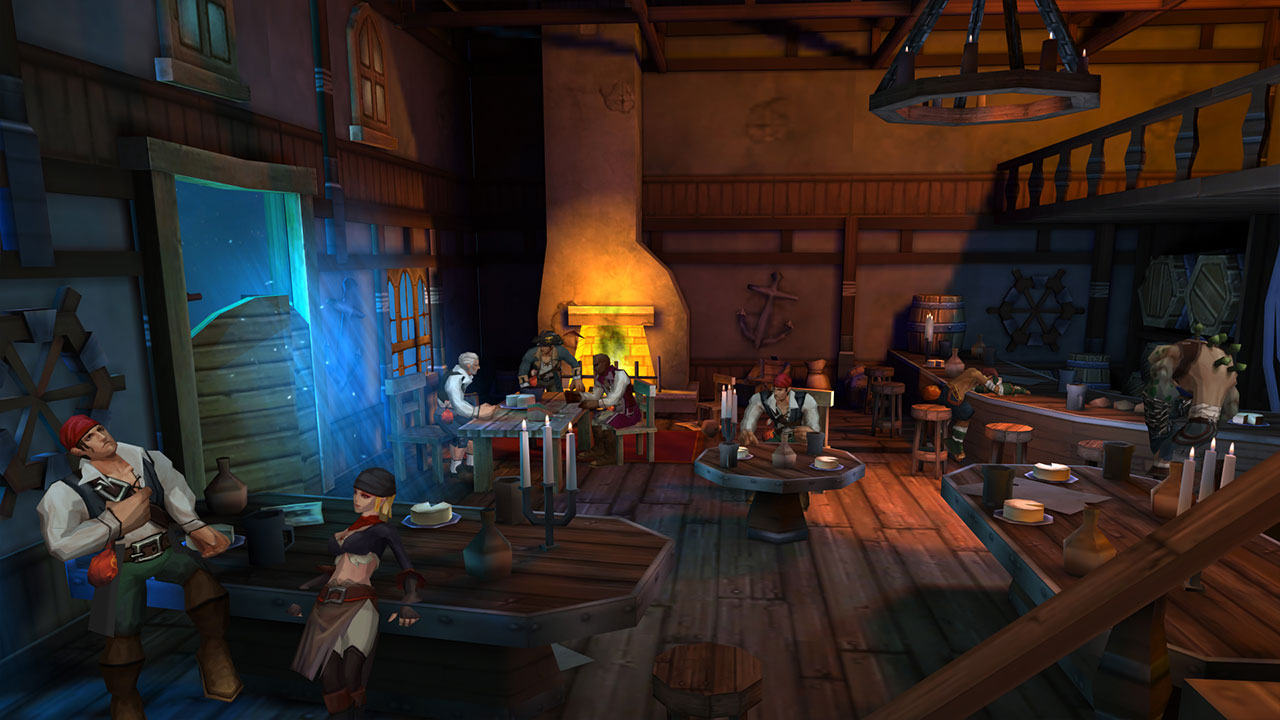 Heroes of the Seven Seas is by no means a terrible looking game, but it does certainly have some rough edges. The ship combat and open ocean all look sharp, but character models have a kind of blocky look that doesn’t mesh well with everything else.

It works from an artistic standpoint as a colorful, if simple, art style. I would have liked a little more detail to the characters and animations, but again, we’re talking about a very reasonably priced game.

Heroes the Seven Seas may not be the longest or most in-depth pirate RPG out there, but it does make an excellent case for a pirate’s life in VR. For that, and the excellent price, it’s worth a look. I just wish there was more going on here, as the foundation is strong, but the ship itself is a little leaky.