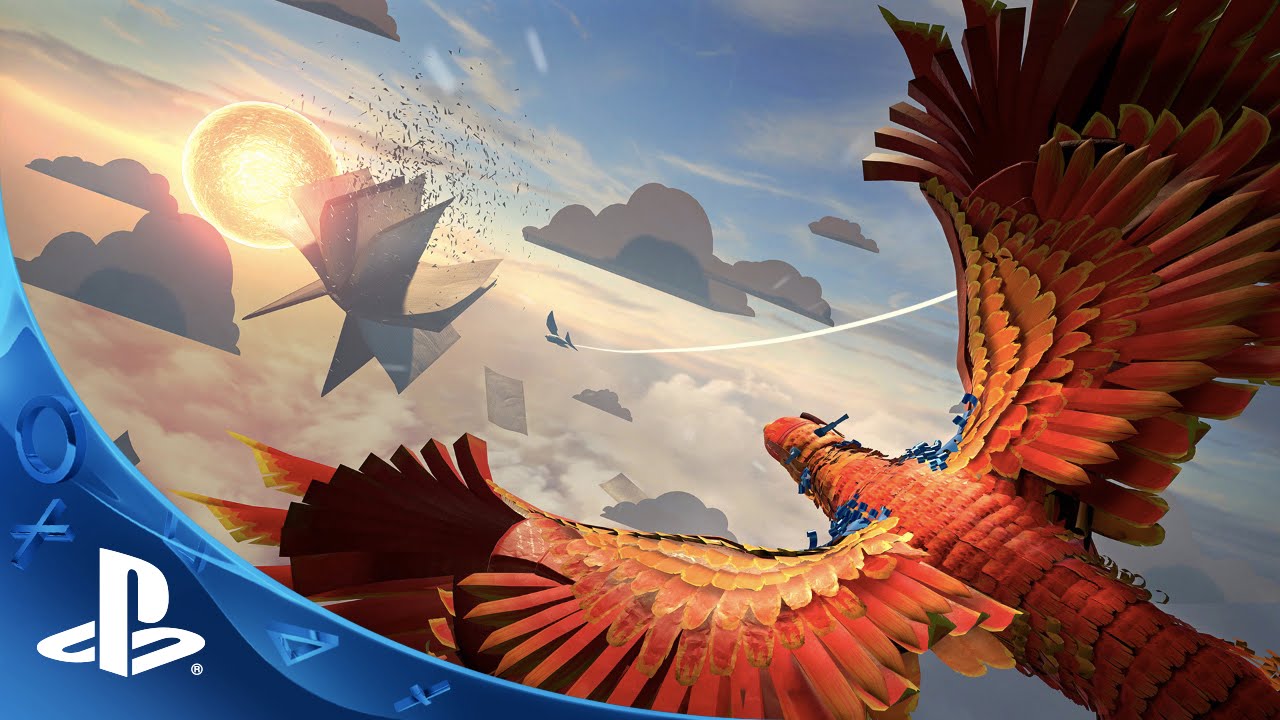 When you stop to think about it, we’re in a golden era of gaming. As technology propels us into the future, games are finally matching the creative visions of their developers. What was impossible before, is just a matter of time now.

Games now have the power to change us, mold us, and teach us. With the release of PlayStation VR, they even have the power to take us somewhere else entirely. Looking at How We Soar, I saw a lot of potential for this VR title to join those ranks. So, does this game soar high, or does it barely break the clouds? We’re here to find out.

Witness Creation Within a Creator’s Mind

The story of How We Soar takes place within the mind of a writer. As a writer myself, I really connect with stories like these, and it made me very excited to jump into How We Soar's world.

It serves well as a means of justifying the serene and abstract environments. The fact that everything begins as nothing but loose shapes made from paper also adds to the overall theme.

As you get close, you see that the paper has words scrawled onto it with elegant handwriting. These worlds come to life in exciting and incredible ways that I would rather not spoil, but I'll go into the mechanics later in the review.

The only story we get in How We Soar comes from a narrator with an appropriately warm and thick voice. I almost wish he spoke more than the sparse lines of dialogue we get from him.

Not only was the voice actor soothing, but he had a contemplative tone that made him sound exactly how I imagine a writer's inner voice would sound.

While I would have liked to hear more narration, if only because it was so well done, it was the environment and the sound design in How We Soar that told the bulk of the story, and what a story it is.

With the premise, they could have gone so many directions, but instead Penny Black Studio decided to tell a very personal story. It brought a smile to my face more than a few times, and other times I felt a pang of guilt as I realized I could relate to this character more than I expected.

I want to gush about how the environment and the story blend perfectly together, but to give you any detail would be to spoil the best parts of the game.

Suffice to say, How We Soar takes a measured approach to storytelling and focuses on a personal story with occasional bouts of fantasy. While I would have loved to see all the worlds we could have visited within the mind of this writer, I respect the developer for telling a story so close to home.

I would have liked more narration, but that need is fairly minimal, given the incredible music that fills in the audio between the small bursts of story.

And, of course, the visuals steal the show with the way they form, shift, and come to life as you progress through each level. For games like this, a story that calls upon our personal experiences and relates to us is crucial, and How We Soar succeeds on this front.

They go above and beyond as well, by telling it in a unique, and almost entirely visual manner. As I mentioned earlier, I would love to say more, but I don't want to spoil the surprises. Let's talk gameplay.

The gameplay of How We Soar is equal parts simple and incredibly profound. You play as a silent protagonist sitting on the back of a majestic Phoenix. When you look down, you see the DualShock 4 below you with two reins attached to it, and controls laid out on the buttons.

The game immediately places you into this scenario. The controls are mapped to the controller, giving you total freedom to look around and take in your surroundings. The left stick pivots and turns, while the face buttons reveal which collectibles you have left to find in the level. Finally, the triggers allow you to speed up or slow down and hover.

Now, some people would compare this to another flying game on PlayStation VR called Eagle Flight, but as you may know about me as a writer, I don’t like drawing comparisons. I think a game should be judged on its own merits as a product and a creative vision.

That being said, Eagle Flight opted for controls that depended entirely on your head motions. It worked really well in that game, but as a perfect example, it would not work here at all. How We Soar is a methodical game in terms of the pacing. Even at top speed, your phoenix doesn’t fly incredibly fast.

The environments of How We Soar beg careful exploration. They begin as nothing more than sheets of paper, but as you progress, they come to life in wonderful ways. When you’ve started bringing them to life, you can fly towards them and watch as color spreads around you.

As an example, I could fly towards a medieval castle and watch as the words on the paper gave way to the bricks and stones of a castle.

As I descended towards the surface, I heard the cries of men in battle and the whistle of arrows soaring past my ears. The structures and shapes were simple enough to be understood, but they truly came to life when I got close to them.

While you’re not required to breathe life into these environments, doing so will award you with trophies. Your main task in each level, is to find and collect a specific number of various colored orbs. To trigger the orbs, you first fly through rings of the same color.

Once you’ve collected all the orbs of a certain color, you’re given the task of chasing down and absorbing a bird of that color. Once you have the bird, you can then take it to a portion of the level and watch as the writing on those pages and the pages themselves transform in the writer’s mind.

To assist you in your travels, you can also strike the reins down with your controller and get a temporary speed boost. This recharges fairly quickly via two red meters on your virtual controller. It’s simple gameplay, but it provides a nice sense of progression without making you feel rushed to finish each area.

The levels are also wide and open, which lends an incredible sense of scale to your exploration. You can even fly into tight areas and practice some intense flying on more than one occasion. If you “crash” there’s no reason to worry. You’re simply placed in a small paper tunnel that opens back up into the level you were just playing.

Now I know many will cry foul at the lack of challenge here, but if you’re looking for a challenge, you shouldn’t be here because that’s not the point. How We Soar isn’t a game about skill, it’s a game about careful contemplation and exploration. It’s meant to be absorbed and enjoyed like a piece of fine art.

It’s also a wonderful title to show your friends and family who don’t play a lot of games. It has an incredible amount of accessibility to it, while still being engaging enough to stay interesting. After long stretches of it, you may feel fatigued by the generally similar gameplay, but in short bursts, How We Soar is a breath of fresh air and a wonder to behold.

Bring The World to Life

The level of immersion that I felt while playing How We Soar was among the highest I’ve experienced in VR. It’s a careful combination of the games amazing scale, incredible paper craft graphics, and a majestic soundtrack.

Playing on PS4 Pro, I could see each of the feathers on the phoenix I rode on. The feathers flapped in the wind on each of the wings and a beautiful tail stretched out behind me. The pages that float in the endless sky of each level come to life with incredible detail and sound effects as you pass near them, as I mentioned earlier.

It’s worth mentioning twice, though, because it quite literally makes you feel like you’re bringing the world to life in a way that few games achieve. The soundtrack also manages to deftly switch between relaxing melodies and soaring musical vistas. It’s really one of the best soundtracks I’ve heard in a long, long time.

The wide open levels are all unique in their approach filled with tiny details for you to find as you collect orbs and bring the writer’s ideas to life. It leverages the power of virtual reality with incredibly unique visuals and music to create a world that, while being abstract by its very nature, couldn’t feel more real.

If it sounds like I’m in love with How We Soar, it’s because I am.

Penny Black Studios is an incredibly talented team of individuals who had a vision that was clear and strong. Their first title is easily one of my favorite on PlayStation VR, if only because it shows how such a strong creative vision can be brought to life by the medium.

If you’re a fan of relaxing, profound, and immersive games like Journey, Flower, Bound, Abzu, and the like, you owe it to yourself to play How We Soar.

They sought to create an experience like none other. They reached for the sky, and in doing so, touched the stars.