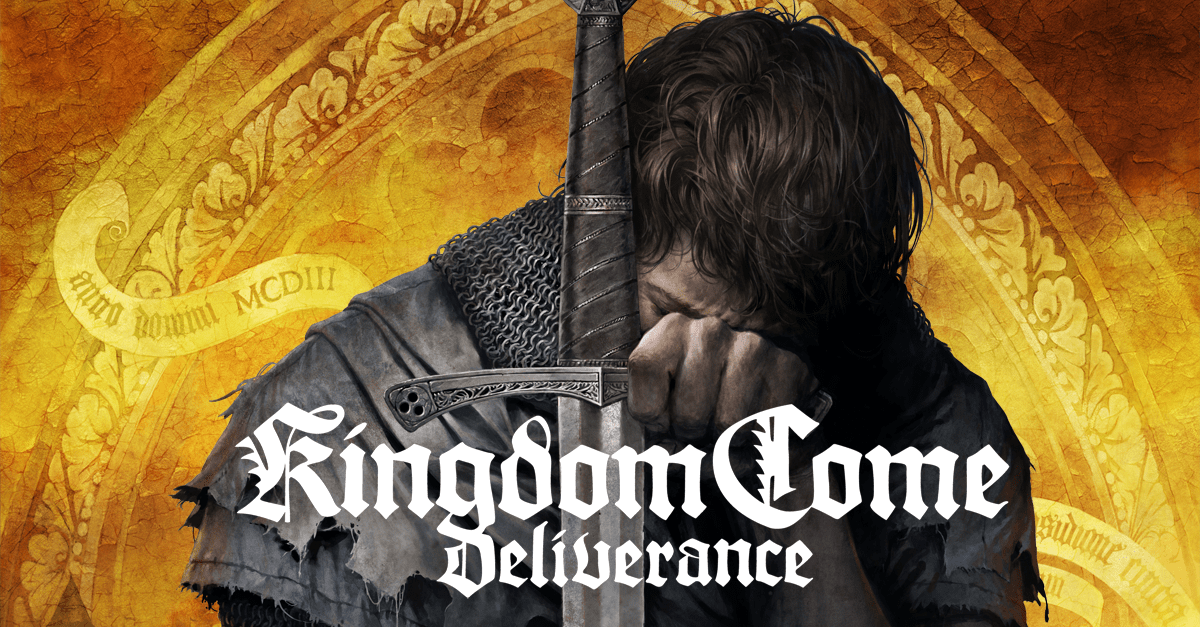 Most RPG games fall into one of several categories: fantasy, science fiction, or a mixture of the two. Very rarely do we see a game that throws out magic and dragons in favor of historical accuracy and a smaller scale.

Kingdom Come: Deliverance is a new RPG on the PS4 that pitches this exact idea. Set in 1400s Bohemia, you'll play as the son of a blacksmith who soon finds himself in the middle of a battle for the throne. Should you jump in for this 50+ hour adventure? Read on to find out!

A Story Small in Scope but Big on Heart

The storytelling and writing in Kingdom Come: Deliverance is one of its strongest features. You play as Henry, a pre-defined character who is the son of a blacksmith.

Henry is a scrawny guy with little to no combat skills and nothing but a small village to call his own. He's a likable guy, but he's not your average RPG hero.

The first act of the game takes it slow. You'll run errands, hang out with friends, and get into trouble as you see fit. Once you've finished the opening hours, things quickly take a turn for the worst.

When an invading force attacks his small village, everything Henry loves is taken from him and he's forced to flee, powerless to stop the slaughter that sweeps across the place he's always called home.

This sets up a story of revenge, but also a fresh start for Henry. He was once the son of the blacksmith with fantasies of adventure, but now he's been thrust into that world with nothing but the clothes on his back.

The game does take a while to get past this opening act, but I really enjoyed the slice of life gameplay that acted as an elongated tutorial. It helped endear me to Henry and to the gravity of the tragedy that has befallen him.

Once you're given the freedom to go anywhere you like, you'll find yourself in an open world that is smaller than other RPGs, but likely more dense than you've seen in recent games.

As you pick up side quests and progress into the world, the game flexes its writing and offers some truly memorable stories for you to experience. These are mature stories that trade fantasy tropes for more personal matters.

It was actually really refreshing to me. As much as I love the lofty storytelling of fantasy RPGs, Kingdom Come: Deliverance offered me a more personal tale that focused on the beliefs, politics, and strifes of this time period.

The amount of historical detail and research that went into crafting this believable world and story is truly impressive. With sharp writing and voice acting that would fit perfectly into any modern medieval television series, Warhorse has truly created a detailed and realistic look at 1400s Bohemia.

While some of the cutscenes could drag on, I never felt bored while exploring this historical world. Anyone who enjoys this era of history will find a lot to love.

There's also some malleability to how dialogue plays out. Based on decisions you make, I noticed characters referencing things I had said or done. These little details made me feel like the story was more personal and adapted to my version of Henry.

If you're someone who wants a story that doesn't follow the typical arc of saving the world from an apocalyptic terror, Kingdom Come: Deliverance is breath of fresh air from a storytelling perspective.

Much has been made about the game's bugs and glitches since launch, so let's find out how my experience fared. 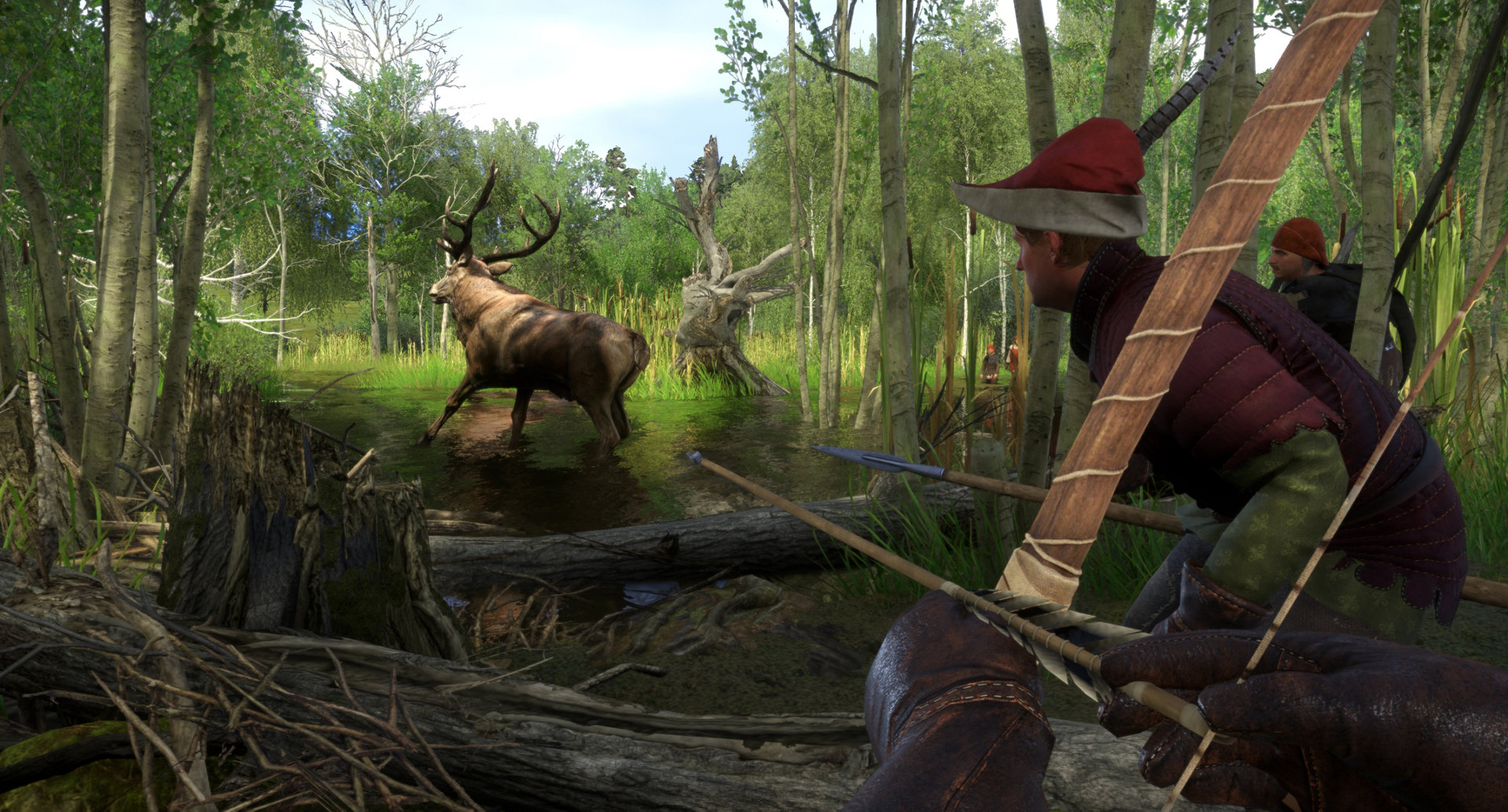 Kingdom Come: Deliverance is an ambitious concept by any standard, but developer Warhorse created this sprawling RPG as their first release. The game does have a massive day 1 patch when you first boot it up, and the developers are working on subsequent patches.

There has been a lot of talk about the state of the game, but my experience was largely free of major issues. Granted, I've been playing the game after installing all the latest patches, but beyond some small visual bugs, I really didn't notice anything game breaking.

Honestly, the bugs and glitches I ran into were no different than the kind I see in AAA titles like Skyrim and even the latest Assassin's Creed. If anything, I saw more bugs in those titles than in Kingdom Come: Deliverance.

That's not to say there aren't issues, but they don't seem to be a prevalent as naysayers would have you believe. Furthermore, the developer is working on new patches to come in the future.

With a game as complex and ambitious as this one, it's a wonder they were able to finish it at all. If you don't mind rough edges, don't let talk of bugs turn you away.

Before you even experience combat for the first time, you'll learn about the survival mechanics in Kingdom Come: Deliverance, along with the social skills you'll pick up as you play.

For starters, the state of your appearance and hygiene can affect how characters perceive you. If you approach someone unbathed and wearing tattered clothing, they won't be as receptive to you.

If you find a bucket of water, you can quickly clean yourself off, but you'll need to maintain your clothing or armor to keep up appearances. Beyond social implications, if you smell terrible, stealth will be more difficult.

The survival mechanics include fatigue and hunger. You'll need to sleep and eat regularly to avoid drops in your stats. The detail here is remarkable. If you overeat, for example, you'll get a debuff for stuffing yourself. If you're extremely tired, your vision blurs and Henry's eyes get heavy. It's very involved. 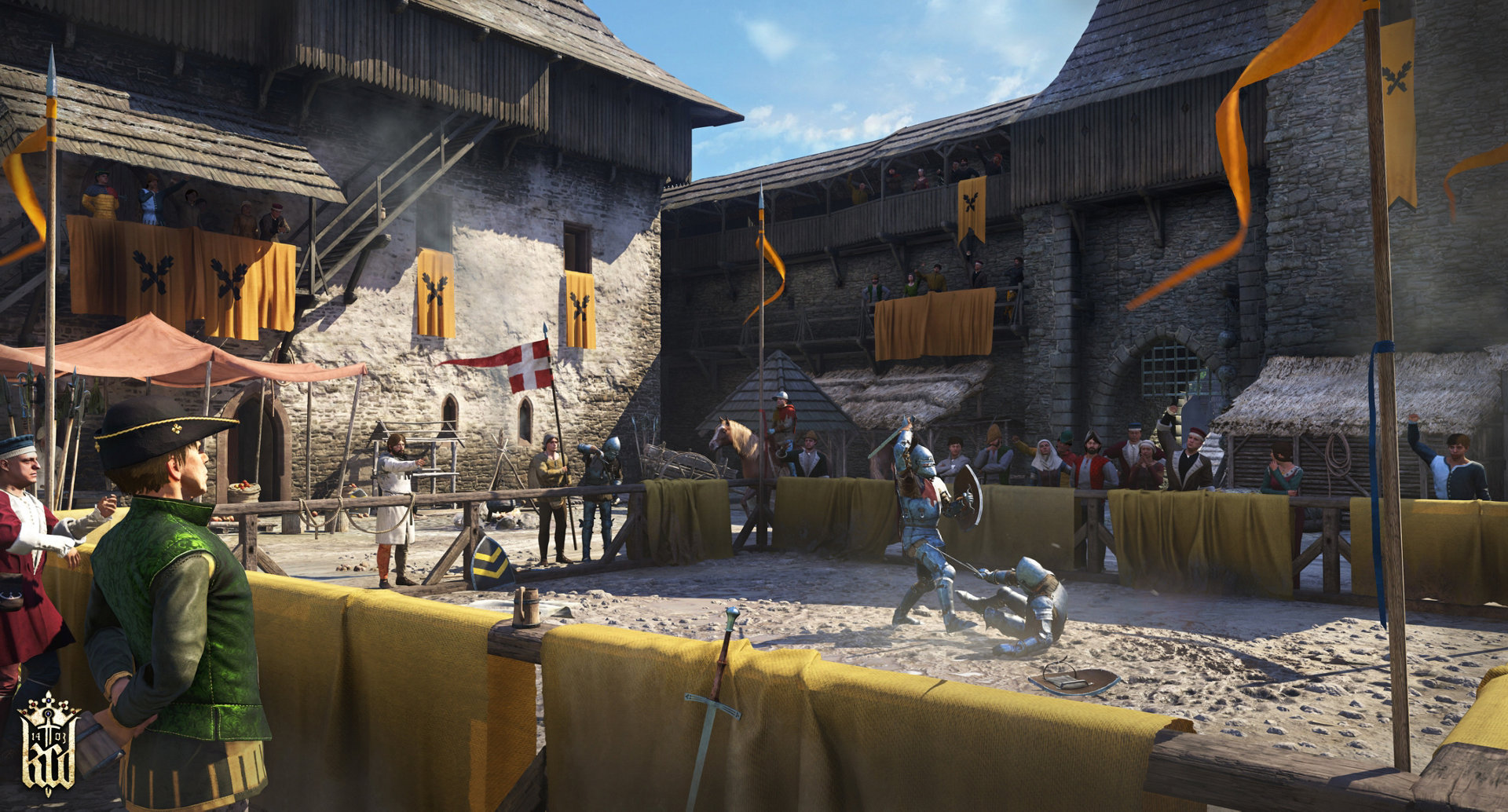 You raise skills by exercising them, much like other contemporary RPGs. If you're able to reason with people using speech skills like threats or appealing to their emotions, you'll slowly get better as time goes on.

When it comes time for combat, you'll find a steep learning curve in Kingdom Come: Deliverance. Instead of simple hack-and-slash gameplay, you'll need to adjust your angle of attack and decided if you want to use a fast or strong swing.

You can target your strikes in one of six different directions ranging from high to low, left, right, and other angles. A kick also lets you put some distance between you and your attacker.

While doing all of this, you'll need to monitor your stamina as well. It's a little overwhelming at first, but it becomes surprisingly intuitive once you get used to it.

Other things like ranged combat and mounted combat are less polished and feel clunky at best. Thankfully, you're not required to do these things very often.

Choosing your armor carefully can also affect your luck in combat. Heavy plate armor, for example, will slow you down and drain your stamina, so even details like this are taken into account.

Depending on how you play Kingdom Come: Deliverance, you may be an illiterate drunk that sleeps around, or you can be a learned scholar that talks his way out of any situation. Your Henry will be different than other players based on your decisions.

Despite the aforementioned glitches and bugs (which were never very intrusive for me on PS4 Pro), Kingdom Come: Deliverance offers anywhere from 50 to 70 hours of gameplay for the price.

While it's possible this will be patched, I must say that I did not like the save system at all. Autosaves are very infrequent and manual saves can only be done by sleeping in a bed or by consuming Savior Schnapps, which is in short supply.

Despite this, If you want a detailed and sprawling RPG with a wide selection of mechanics and realistic combat, this one is certainly worth a look in my opinion.

Detailed Presentation With Some Blemishes 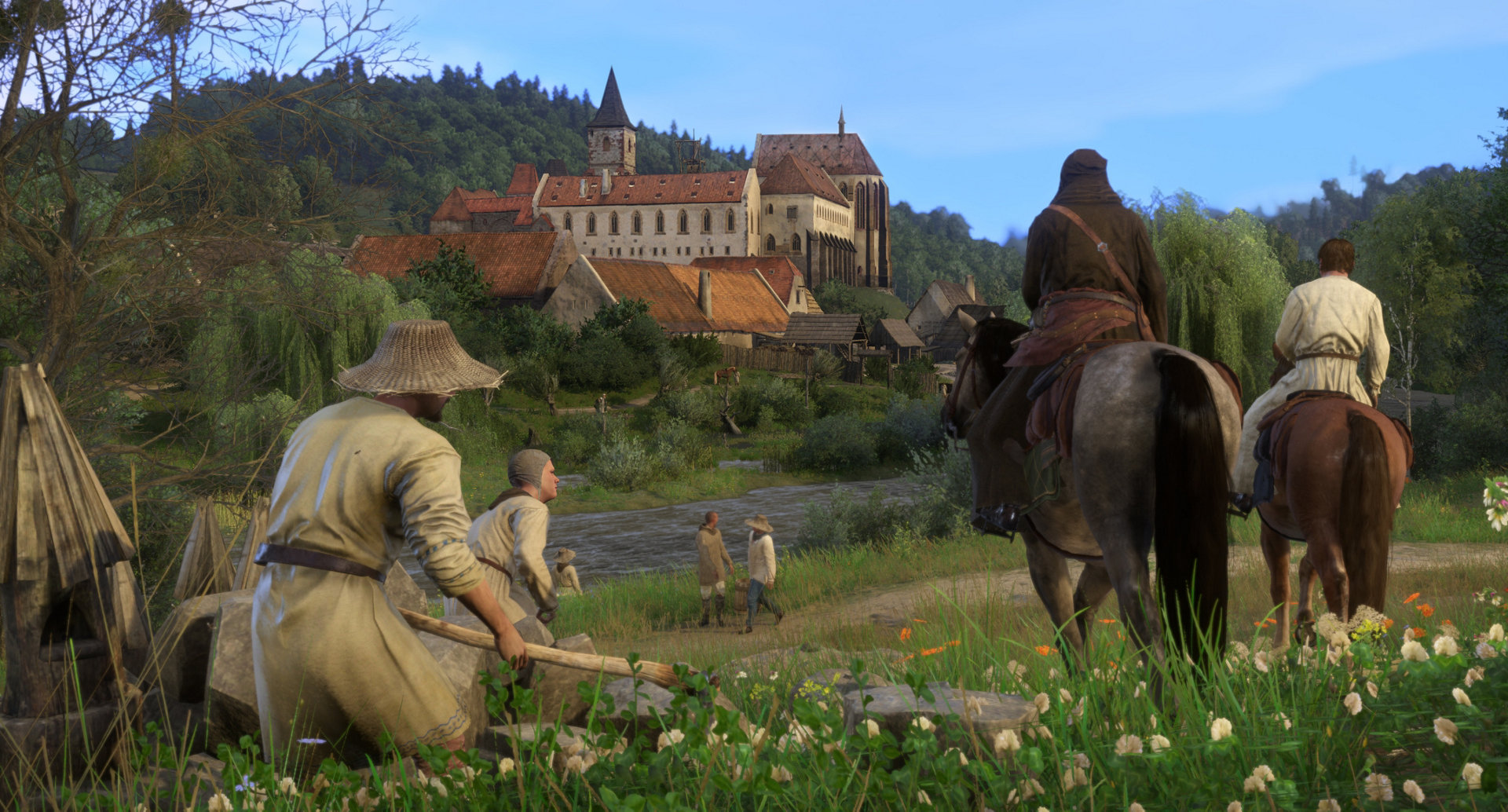 Kingdom Come: Deliverance uses the CryEngine for some truly impressive detail in its characters and environments. Textures are very sharp across the board, and human faces are exquisitely detailed.

The game does tend to dip into the uncanny valley with its animations, however. During casual conversation, characters tend to look a little stiff. They do tend to move around on occasion and showcase emotion in their faces, but this just accentuates the moments when they don't show any emotion.

During scripted cutscenes, things are noticeably better. Honestly, though, it's no worse than any other open-world RPG, and if anything, the moments when the animations shine are standout moments.

With great voice acting, I didn't really focus on this animation quirks. Instead, I found myself immersed in the game's world thanks to the excellent performances and wonderful soundtrack.

The orchestral pieces here are suitably medieval in their sounds, but the game has some truly excellent musical setpieces for the big moments that really drove home the emotion for me.

In the end, Kingdom Come: Deliverance is a little rough around the edges, but that doesn't stop it from being an ambitious and largely successful venture into a realistic RPG.

If you can look past the blemishes, you'll find a lot to love about this debut title from Warhorse Studios.

A copy of Kingdom Come: Deliverance was provided to PS4 Experts for review purposes. Played and reviewed on PS4 Pro