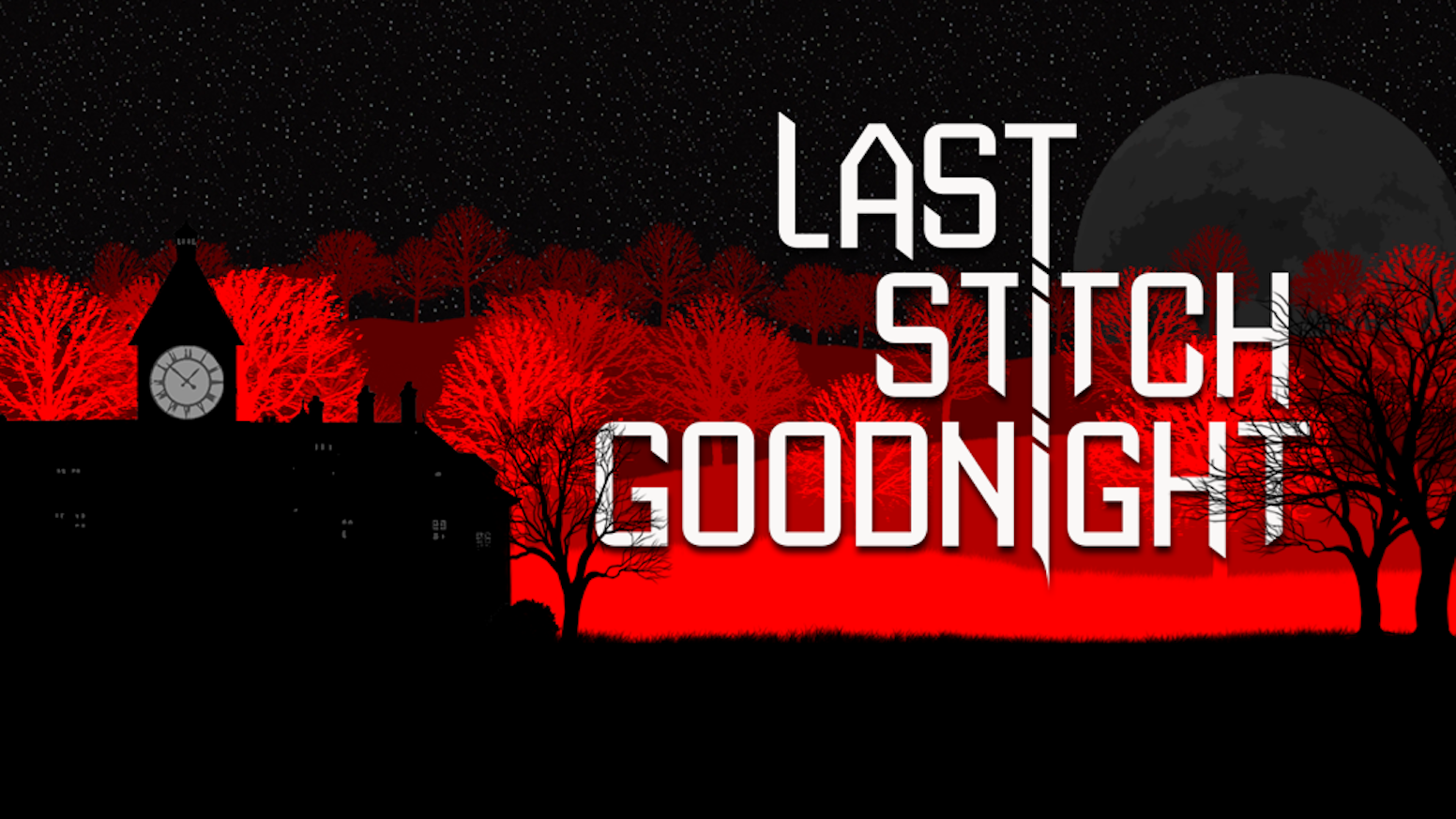 It's not too difficult to find a Metroidvania style game these days. A lot of indie developers have embraced this concept of a 2D world that branches out and offers multiple paths to explore, new powers to reveal further locations, and a tight cycle of exploration, combat, newly revealed areas.

It's a tried-and-true formula, and one that Last Stitch Goodnight embraces wholly in its design. This horror title stitches together a lot of different elements into an amalgamation of various tones and concepts. Does it manage to hold together, or does this game come apart at the seams? Time to find out.

An Intriguing Story With a Slow Burn

Last Stitch Goodnight starts with you in a hospital. Things quickly go south, and you find yourself in a cell when you wake up next. From here, you're set loose upon a sprawling mansion, complete with a hidden lab and plenty of other secrets.

The game quickly establishes a supernatural element that I won't spoil, but it makes for an interesting premise. As you begin exploring, you'll come across several different types of enemies and a few friends who help you get your bearings.

The overarching mystery keeps things moving, but it takes some time before you start getting answers about what's going on and why you're there. At first, I was confused as to why I was fighting people who threw bricks and vials of chemicals at me.

Security guards I understood, but who were these other people? With Metroidvania style games, the pace of the story is usually spread out, and that pacing can be furthered slowed by how quickly you find the next objective (or how many times you get lost).

Last Stitch Goodnight takes some time to get going. After you get through a few objectives and a boss or two, the story starts to reveal some of its intricacies.

Up until this point, Last Stitch Goodnight had failed to grabbed my attention, but the revelations that came a little ways into the game renewed my interest in the events happening around me.

Collectible files in the environment and those dropped by enemies offer additional insight into the enemies you're facing, and the ultimate plans that the mansion's resident mad scientists has for you and the people in his possession.

Between the main story, and the side quests, there's some pretty unique ideas at play here. I just wish that had come forth a little sooner, as the game's opening hours don't make the best first impression from a story standpoint.

Even so, while Metroidvania games aren't known for deep stories (they're mostly focused on the gameplay), Last Stitch Goodnight managed to surprise with an intriguing tale once you get past the opening areas.

That being said, I would be remiss if I didn't talk about the tone of Last Stitch Goodnight. This game bills itself as a horror experience, but the game doesn't really get scary in any sense of the word, until you've passed that first act.

Some grotesque enemy designs and dark environments call to mind some moments of horror once you get into the game, but a steady flow of sarcastic jokes in both the dialogue and menus throw off any semblance of a horror atmosphere.

Some of the dialogue just seems out of place, given the character's circumstances. While horror games don't need to lean into the distressed character angle, our protagonist doesn't seem too concerned about his well-being at times.

Note that I say "at times." These moments pop in every once and a while and break the immersion, but by no means does it completely ruin the tone. It's simply confusing to try and nail down an exact atmosphere when the game seems to be switching between serious horror and inhumane experiments, while also throwing in sarcastic remarks and jokes.

It's almost as if the developers couldn't decide if they wanted to do a dark comedy, or lean heavily into the horror side of things. It feels like the tone is being pulled in different directions, which causes some of the story to stumble, but overall, it's a pretty unique tale. 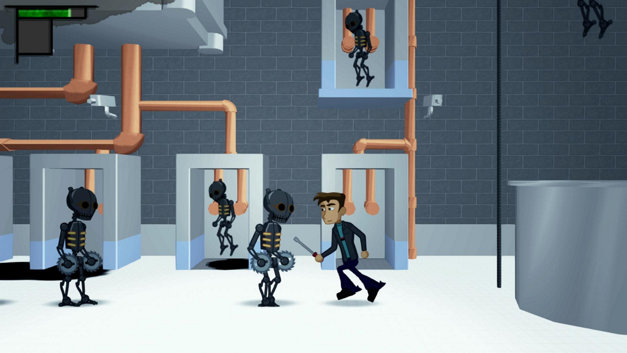 As an indie effort, Last Stitch Goodnight shows some cracks in its armor. While the scope and size of the game is admirable, given the budget it was working with from Kickstarter, the graphics and animation are very simple.

This wouldn't be an issue if it didn't affect the gameplay. The dodge mechanic, for example, is spotty as best. I often found myself dodging into the enemy instead of moving away from them.

You come across a good variety of weapons as the game goes on, but the stiff animations make it difficult to make precise movements with your attacks.

Furthermore, these animations rear their heads when you're platforming. For the most part, everything works fine, but it never works incredibly well. In many cases, combat can feel clunky and inconsistent.

Jumping and platforming works, but again, it's never quite smooth and seamless. Thankfully, despite these issues with the combat, the enemies offer a good amount of variety in their attack patterns and associated strategies.

Bosses are a standout example. Each one requires a unique approach that usually involves solving a puzzle in the environment or on the boss themselves. Truly, these are the moments where the combat shines.

Speaking of puzzles, Last Stitch Goodnight has some excellent puzzle design that provides a nice challenge, while never being to the point of frustration. They usually involve using items and your abilities, but they always have a unique solution.

With great puzzles and cool bosses, the rest of the combat pales in comparison, unfortunately, but the positives start mitigate some of the these issues. 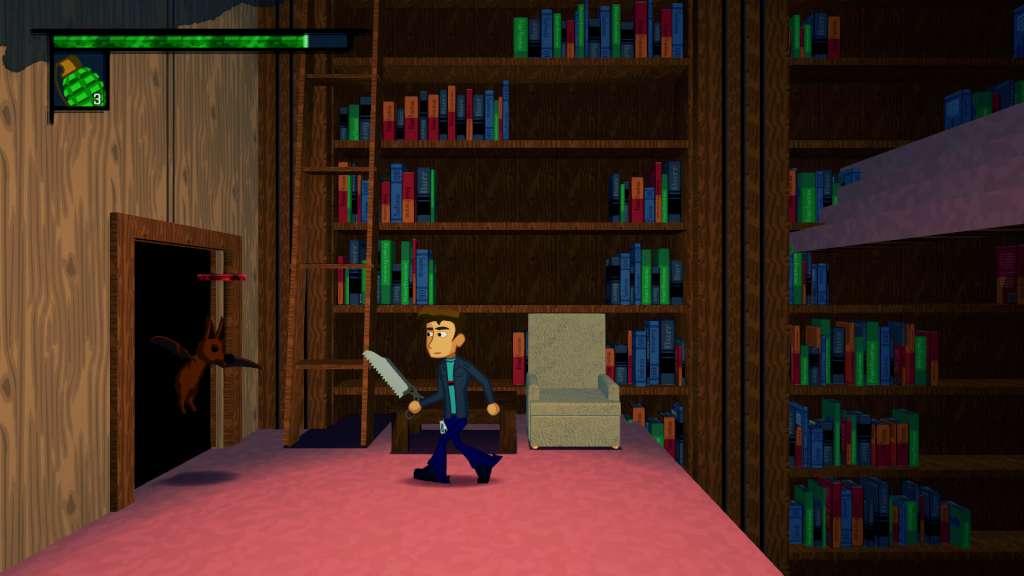 Last Stitch Goodnight is a really interesting game. It's first impressions aren't too hot, but if you give it time, the game comes into its own and the creativity of the story, boss fights, and puzzles shine through.

One major issue I had with the presentation, was the dialogue. The characters all speak with a kind of gibberish sound that is pretty funny, but ruins any seriousness to the tone in conversations. Again, if this was supposed to a horror game, the fear factor is being undermined by some of the comical elements.

It creates a tone that's at odds with itself, and while some may find it endearing (and I did, to a point), it simply seems like the game can't decide if it wasn't to be serious or funny and ends up falling somewhere in between.

The simple graphics are fine, but the stiff animations bring down some of the gameplay elements for me. Even so, Last Stitch Goodnight is reasonably priced and offers a solid amount of gameplay, especially with the side quests offered to you.

It's got some rough edges and a bit of an identity crisis, but I enjoyed my time with the game. If you're looking for something different, and you don't mind a bit of a slow burn in the beginning, you should definitely check this one out.