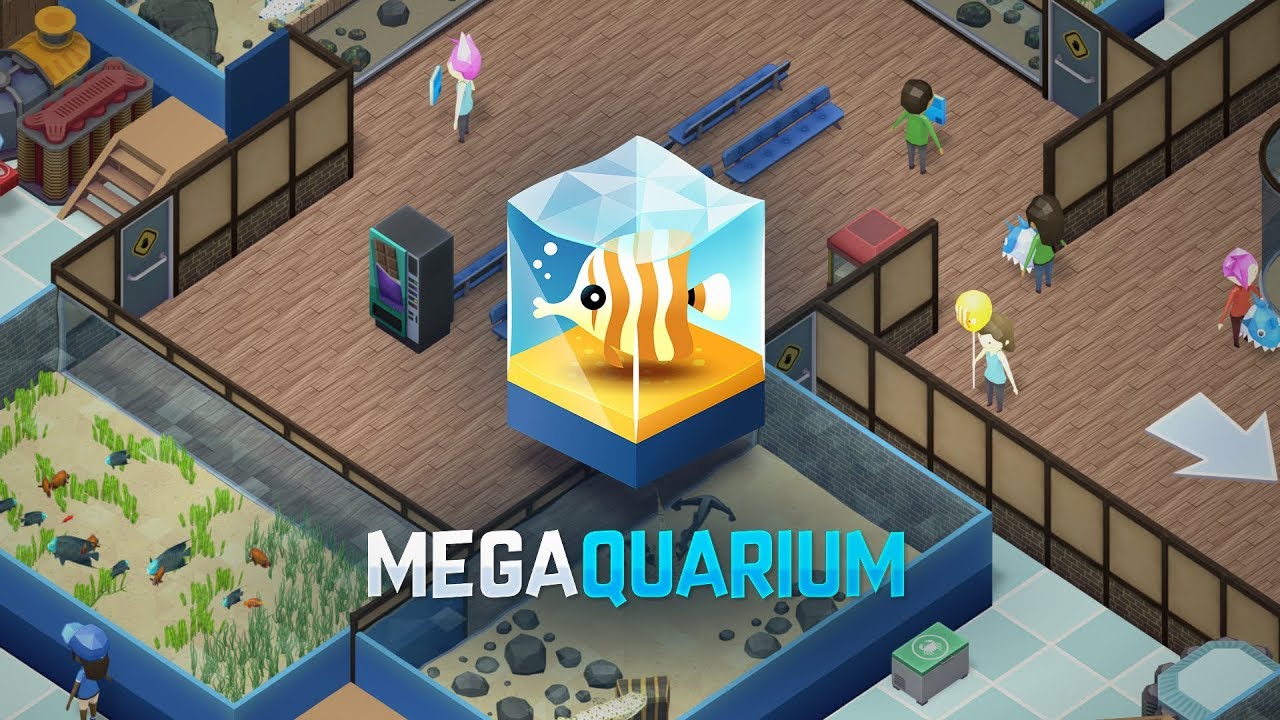 I’ve always loved aquariums. As a kid growing up in Florida, I used to visit SeaWorld any time I could just to see all the different forms of aquatic life. I particularly enjoyed petting the stingrays. In some cases, the animals weren’t treated properly, but I still think the concept of an aquarium as a way to learn more about aquatic life and how we can protect it, is a good thing.

Megaquarium for PS4 doesn’t dive this deeply into the concept, but it does offer a tycoon style sim experience focused entirely on building, expanding, and running an aquarium of your very own. Not only is it a unique concept, but it poses its own unique challenges as well. So, should you get your feet wet? Let’s find out.

Nothing Fishy About This Experience

Megaquarium offers both things you will want to see in this type of experience: a guided campaign and a sandbox mode. The campaign itself has you taking on various missions that show you the ropes and present specific challenges as well.

You’ll start with a small aquarium that you need to build up into something respectable, but soon you’ll find yourself managing much larger and more important aquatic enterprises. The missions have a great scope and pace to them that simultaneous challenges you while never overwhelming the player while they try to learn the ropes.

When you finish a mission, you can continue playing as long as you like as well. This lets you admire your work, learn from your mistakes, or simply move on whenever you’re ready. As the PS4 receives more and more of these tycoon games that were often exclusive to PC, it’s nice to see that Megaquarium has learned from the missteps of other simulation style experiences.

The game layers on each of its mechanics in an organic way, and pairs it with compelling mission objectives to create a campaign that is both challenging and consistently paced.

All of this translates well into the sandbox mode, which allows you to expand, research, and grow as quickly as your budget will allow. The lessons learned from the campaign will serve you well here, but as always, it’s smart to start with the campaign to learn the ropes.

These types of games are often somewhere between relatively simple and insanely complex. Megaquarium strikes a nice balance between these two, especially as you progress and learn more about the systems available to you.

There are different types of tanks ranging from free-standing to the kind that are surrounded by a wall. The latter of which allows you to build staff areas behind them where you can store filters, heating equipment, and food for the fish. This is crucial in later levels where guests will expect things like that to be out of the public eye.

The actual process of researching new fish and equipment is simple, but invites strategy since your progress is based on the types of fish you have in your aquarium. Each creature, be they fish or crustacean, have unique needs and ratings for various in-game currencies that you’ll need to progress.

In terms of research, their science and ecology rating will affect the rate of research for new equipment and species accordingly. Beyond this, you’ll need to consider their needs in terms of water quality, food, the environment they prefer, and if they get along well with other animals.

Something as simple as plants or cave structures will come into play when you’re building tanks, which makes them more than mere decorations. I loved how all of this fits together as part of the overall strategy. It made the game engaging, but managed to stay outside the realm of chaos because you mostly focus on the aquatic animals and their needs.

That’s not to say guests won’t demand things from you. They have basic needs, like vending machines for drinks, or benches so they can sit and rest. Even garbage cans will be needed if you want to keep them from littering.

Among all of this, there is a need to hire skilled workers that can keep things running smoothly. Thankfully, it’s not difficult to find people with the skills you need for each aspect of the business. As a total package, Megaquarium is an excellent take on the tycoon formula that leverages its unique premise to create something fresh among others in the genre.

With a game this complicated, the menus and UI are something that many people will be skeptical about. After all, these types of games are usually made with a mouse and keyboard in mind.

I’m happy to say that Megaquarium does a great job of translating well to the DualShock 4. By separating menus into categories at the top, left, and bottom of the screen, you can quickly navigate to the items you need without too much hassle. I almost prefer this setup over the usual use of a radial wheel. The way Megaquarium implements its UI is more structured and easier to navigate.

I did run into a few small issues, however. On two separate occasions, an audio bug would start happening each time staff opened or closed one of the doors leading into employee areas. Instead of the normal opening or closing sound effect, the game would play a loud burst of static and exaggerated noise that caught me off guard the first few times it happened.

Restarting the game solved the issue, but it did happen a second time. Other than that, I did have issues with people wandering into areas while I was trying to move or build something. This isn’t a bug, and it’s easily fixed by pausing the time in-game, but it was still annoying when guests would get trapped in new areas because they felt the need to wander into a blank space while I was building.

A Simple Style With Effective Elements 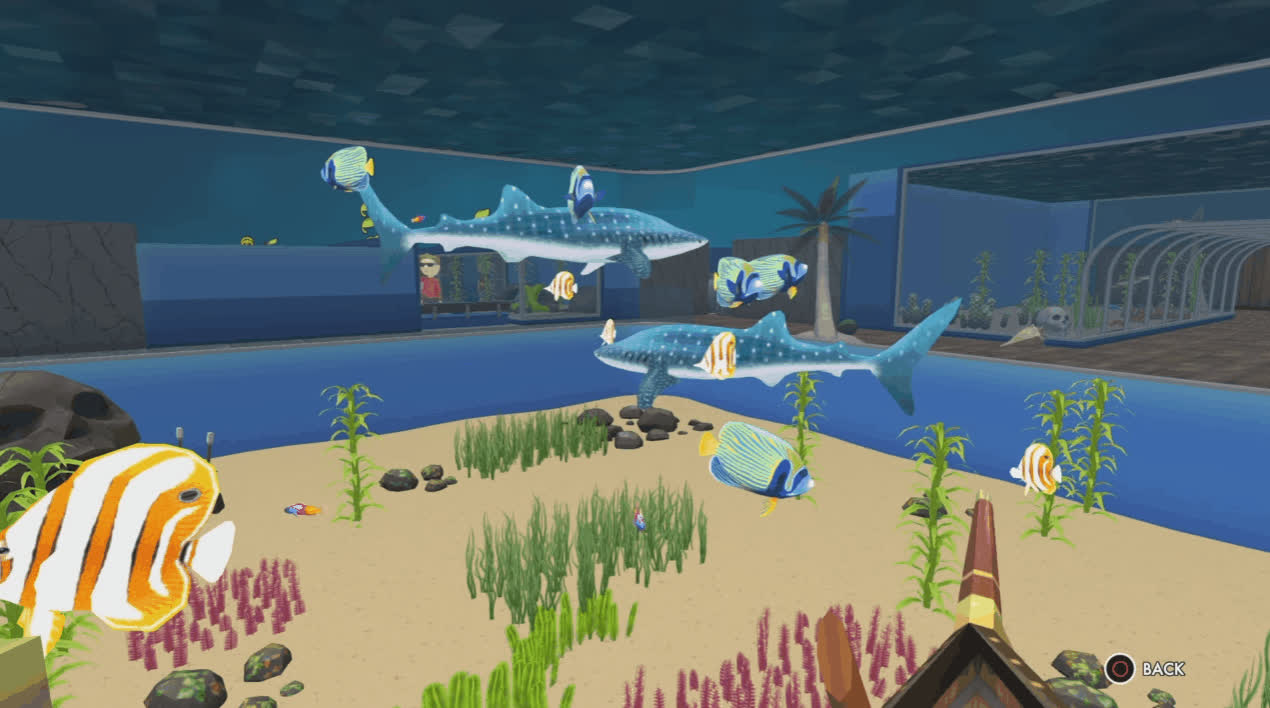 Megaquarium employs a simple art style for the environments and the people in the game. I did notice that there’s a bit more detail on the aquatic life in the game, but overall it’s a pretty straightforward style. Animals in the tanks move with enough realism to sell the illusion, but they’re not going to mimic their real life counterparts.

One detail I liked was the option to explore your aquarium in first person by zooming in until the perspective switches. This allows you to peer into your exhibits and admire your work up close. It’s a small, but nice touch.

Finally, I have to give the soundtrack a special mention. The upbeat and fun music helps keep things light, even when it feels like you’re losing control of the action on screen. Games like this often have a forgettable soundtrack that acts as background music, but Megaquarium surprised me with a fun and catchy way to set the mood.

I’ve played a lot of tycoon style games in my time as a gamer, but never have I played an aquarium simulator like this one. The concept is implemented really well, with options for strategic play, and plenty of flexibility in how you customize and populate your tanks.

A copy of Megaquarium was provided to PS4 Experts for review purposes.