There’s been a stigma on any and all Superman games since the first release of Superman 64 years ago. We all wanted that sensation of flying at supersonic speeds, and the power to destroy enemies with a single blast, but none of the games featuring this superhero ever hit the mark.

While it’s not a Superman game, Megaton Rainfall is a game that has come to scratch this itch. You play as an interdimensional being that has been summoned to Earth to defend it from an alien invasion. Fly at incredible speeds, blast down massive enemies, and do it all inside or outside of PlayStation VR. Sounds like a winning combo, doesn’t it? Let’s find out if Megaton Rainfall soars past our expectations, or crashes into the ground under the weight of its own ambition.

My Offspring, You Need to Play This Game

Your character is guided by a mysterious cube in Megaton Rainfall that seems to have unimaginable power. It constantly refers to you as “my offspring” signifying that it somehow created you and perhaps much more as well.

While it doesn’t have a constantly present or very involved story, Megaton Rainfall does offer some compelling moments of philosophical quandaries, presenting complex thoughts and concepts through the narration of this mysterious cube.

While I certainly would have liked to see more of the lore behind this cube and behind the protagonist’s creation, what we have here is a nice framing device that gives you a reason to fight the oncoming menace.

The philosophical nature of your discussions gives some weight to the story that goes beyond the simple concept of fighting aliens because they’re bad, which I certainly appreciated. We have to remember throughout this review, that Megaton Rainfall is primarily the work of a single person: Alfonso del Cerro.

While he had some help from Sony towards the end of production in the form of artists and an excellent composer, the majority of this game’s existence (including the engine) is the work of a single person.

Given this, the presence of any story is a welcome surprise. In small productions like this, there’s rarely time to include any kind of thoughtful story, so I welcome it with open arms. It also helps that there are lofty moments of incredible discovery, punctuated by the cube’s narration, which left me with lasting memories of the experience.

One such example is the moment when you’re given the ability to leave Earth’s atmosphere and fly out into the cosmos. I won’t say more than that, but it’s an incredible moment when you first experience it.

So, while I would have liked more detail, background, and dialogue, the story in Megaton Rainfall is more than you would expect from its price tag and the small development team. It’s a great way to set up and solidify the premise of your forthcoming actions, while also giving you a sense of progression.

An Incredible Sense of Immersion, With VR Taking the Cake 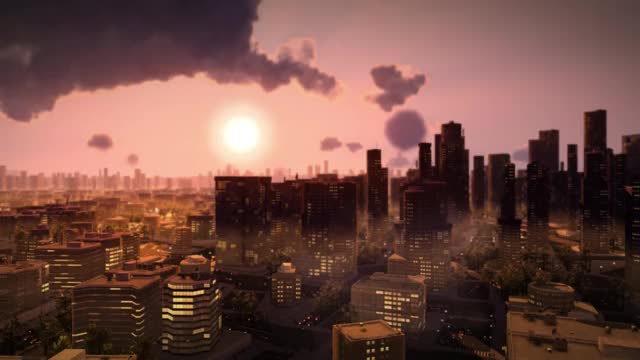 Megaton Rainfall is a game you can play both inside and outside of VR. I tried it both ways myself, and I do prefer the VR option. Even so, if you only have a standard setup, it’s still an incredible sensation to play on a TV screen.

The controls are pretty simple, with the ability to go up and down with the R1 and L1 buttons. Moving in any direction builds up speed fairly quickly. As you progress through the game’s missions, you’ll get new abilities that are assigned to the face buttons and triggers.

You can go anywhere you want outside of missions, and even far into the edges of the universe when you unlock the ability to do so. During missions, you’ll be confined to specific areas where you’ll need to defend the city from destruction.

You have no health bar yourself as you are invincible for all intents and purposes. Instead, your health bar is tied to the city itself. That means you need to watch your attacks so they don’t hit buildings or people. It also means your enemies will 100% focused on causing as much destruction as possible.

That’s the basic concept, but when you actually get a chance to play the game, you’ll find that there’s so much more here than 9 missions and an open sandbox for you to explore. These are the basic facts, but playing Megaton Rainfall is an experience that needs to be seen to be believed.

In VR, you’ll find that there’s probably less depth than you would imagine from a title in virtual reality, but that doesn’t take away from the sensation you’ll feel when you fly across the planet or far out into space. I’ve seen some people compare it to 360-degree video, but that’s a gross exaggeration.

Yes, it could have more depth in VR, but that doesn’t mean it’s completely 2D. Again, even someone like me who nitpicks things like this completely forgot about that when I was in the heat of battle.

Some comfort settings are available for those who need them, but I didn’t feel any motion sickness during my time playing. I turned everything off and opted to aim with my head tracking when fighting in VR.

The sense of speed is absolutely exhilarating. Zooming from one city to another, or from one planet to another, is just incredible in VR. Within the span of a few seconds, you can exit the Earth’s atmosphere and dive back down into the oceans, soar over the mountains, or fly through the skyscrapers of a city.

It absolutely nails the feeling of flight and offers an incredibly large playground to do it in. Naysayers will point out that far off planets and galaxies lack any detail on the planets, but again, we’re talking about a low-priced game made by one person. The fact that there’s an explorable universe at all is a feat in and of itself.

The VR-support, while not perfect, does look and feel great in the moment. For the price, I absolutely recommend Megaton Rainfall to PSVR owners.

When it comes to standard play, you’ll have sharper graphics on a TV screen and all of the same incredible flight. It’s not quite as exhilarating outside of VR, but it still plays very well with a smooth frame rate and responsive controls.

Now, let’s talk about combat. As mentioned earlier, you’ll need to protect the city and people to keep your health bar from reaching zero. The enemies come in a nice variety, all of which have a specific weak point that is typically bright red. For some, it’s a red circle on the top or underside, but for others it’s more subtle.

For example, one enemy requires you to throw it’s projectiles back at it. They also each have their own behaviors. Some enemies will disguise themselves as buildings, while others will hide on the sides of one before detonating.

Some enemies will fire massive blasts or drag wrecking balls through the streets. It really is a great mixture of enemy types and strategies to take them out. All of this contributes to a strong challenge as the game ramps up. I found myself losing missions a lot in the latter half as I tried to manage the onslaught.

It really is one of the best superhero games I’ve ever seen, and it’s not even attached to any specific comic book or universe. It stands on its own and makes you feel like an all-powerful being. I highly recommend VR, but you should play it regardless. Once again, I must stress that one person did the majority of the work here. It’s true that if you stop to fly down to street level or really press yourself against the textures, you’ll find that there’s not a lot of detail up close. That’s not really the point, however. When you’re in motion and moving, the game has an absolutely amazing amount going on without ever dropping a frame.

Buildings collapse and implode as enemies move all around you. The world comes in and disappears as you fly past it with zero delay or loading. Explosions rock the screen without ever stressing the engine, and the game doesn’t even flinch when you decide you want to fly out of the atmosphere, into space, and across to another galaxy.

Yes, there are some glitches I’ve noticed, such as one situation where I froze out in space and had to reset my game, but the overall experience is extremely polished. In addition, David Garcia was brought in to work on the game’s music. His input has resulted in some excellent tracks that really add intensity to the combat, and quiet reflection to the moments when you’re traveling hundreds of miles in the blink of an eye.

People can and will find things to complain about in Megaton Rainfall, and while it’s not perfect, it’s incredibly impressive that one person accomplished all of this. More importantly, it’s a blast to play and a great experience in VR for a great price.