The first beta for Modern Warfare has come and gone, but another begins today. PS4 owners will be able to play the second half of the open beta, September 19th - 23rd, for free, but you might need a PS Plus subscription, depending on your region.

Before we move onto the next beta, I’m going to drop my initial thoughts of the upcoming game, based on the beta.

Let’s start with the minimap, since that seems to be such a hot topic right now. Initially, there was no minimap, unless you posted a uav, or personal radar. A lot of people were disgruntled over this and pretty much flooded the internet with demands of it making a return.

The developers met those demands in the middle. They turned the minimap on, but it does not display enemy fire. It shows you your location and friendlies. The main complaints were that no minimap promotes camping and players didn’t like that they couldn’t tell if footsteps were an enemy or friendly approaching, IW listened and made a for trade, but I hate to break this to you, but the minimap addition did not change the games atmosphere. Camping continued and that’s not likely to change.

In regards to run n fun play style, I am not embarrassed to say that I couldn’t quite live up to that play style with success. In every other CoD I’ve played, I have had no problem with running in on a team and laying waste to their virtual 1ups, but Infinity Ward has some changes to make the game more realistic.

Once I was able to create a class beyond level 10 (thanks to the level cap being raised to 20), I was able to play much better. Sometimes it’s a matter of what’s available and that’s just fine. Anyway, the Time To Kill (TTK) seems to be much quicker than I can remember in past CoD titles. That makes a pretty big difference in a game like this. If you have played Rainbow Six Siege, you could compare the TTK to that. It very quick and accuracy is important.

I don’t enjoy camping in FPS shooters, but I also couldn’t just run up on a squad of enemies and to take them all down. I found myself grabbing a triple and then being put down as I went for the quad. In the end, I found I had to accept two different play styles and combine them. I would run to one spot and check my surroundings for enemy movement. Give it a second and make a move for the next spot. I did what I could to be active, without feeding myself to the enemy teams.

I also found that I had to adjust how I would normally, according to whom I was playing with. I have some friends that are great in CoD and other friends, not so much. I am sorry to say that when I joined my “not so much” friends for a match, I had no choice but to stay back and let the enemies come to me. I was watching as they fed themselves to the enemy like hamburg in a meat grinder. They should not have continuously rushed the enemy or objective points, if they didn’t have the skill to play that way and I wasn’t skilled enough to carry them on my own. So, I stayed back, took down UAVs, Attack Choppers and any enemies that were attempting to infiltrate the spawn points. Call me a scumbag camper if you’d like, but at least I’m honest about how I play. 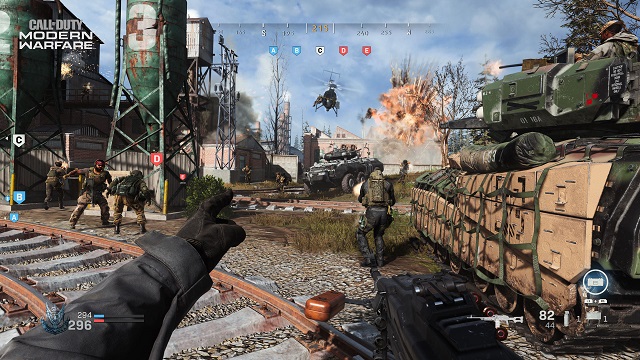 I think we are going to see some major balancing before the game releases. I could headshot enemies from across a map with an SMG, pretty easily. In fact, I ended up switching to an AR for the most part, because AR’s could contend at any range. I know there is a lot in the works for fixes, but even after we play the next beta, the final game will not likely be the same. I have no idea what the final build will be, but I will say that I have high hopes for Modern Warfare. I know this franchise gets a lot of hate, but I enjoy it. I enjoy most FPS games as well as a large variety of other genres.

The beta was far from perfect, but it does give you a good idea of where the game is headed. I feel like it’s old school meets present day. It is nothing like Black Ops 4 and I think it will have much more to offer than WWII. I’ve been let down before, but Infinity Ward needs a win right now, so I dont they will disappoint me this time.

Want to share your thoughts on the beta? Drop me a line in the comments and we can discuss it further. I know there is a lot I didn’t cover here, so feel free voice your opinion.