I got my hands on the Nacon Revolution about 4 weeks ago. Considering Sony has officially licensed this controller, I felt it was important to really put some time into it before I could offer a solid opinion. Keep in mind, this controller is not built for the everyday gamer. It is designed for LAN Tournaments and serious FPS competitive players. This controller does not compete directly against the standard Dualshock 4. That being said, let's get into the nitty gritty.

Looking at the front, this is obviously inspired by the Xbox button/stick layout. For anyone that just can’t stand the way an Xbox controller feels in their hands, you won’t find anymore comfort with the Nacon Revolution. Preference aside, this is a pretty solid controller. 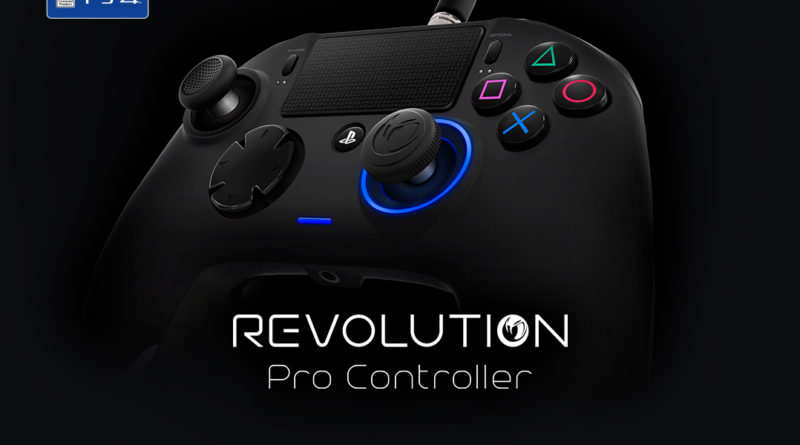 Button input in-game, is incredibly accurate. Have you ever found yourself playing a game in a LAN party or even online multiplayer, and questioned if maybe there was something wrong with your controller? Well, you could have been suffering from controller lag. Especially if you're in a LAN party. You won’t run into that issue with the Nacon Revolution. The catch here is, this pro controller is wired.

The analog sticks are quite responsive. More so than the Dualshock 4 and slightly more so than the Xbox Elite controller. It takes a slight touch for the analogs to respond and that in itself, offers players greater accuracy. Changing in game sensitivity settings seems more effective than it does with a standard controller.

The shoulder buttons also respond well and feel durable. For button mashers all around, they’ll find themselves feeling comfortable. This controller is certainly durable in those regards. While the L2 and R2 triggers feel fine, tapping L1 and R1 doesn’t feel very natural. The buttons are a little too large to comfortably transition between R1 and R2, but you do get used to it. The accuracy this controller offers, does not make up for the discomfort.

The directional pad is not very good. It doesn’t feel very accurate or responsive. It has the 8-way directionals, which has never really taken off in the industry. Most of us do not need to press diagonal directions with the D pad. I feel the controller would have been better off with the traditional Up, Down, Left, Right.

Nacon Revolution comes with additional buttons on the back. Rather than paddles, you will find 4 simple buttons that you can customize. The entire button layout can be remapped through a PC, but the shortcut buttons are not that great. The benefit to paddles is easier access that offers more comfort control, the buttons on the Revolution respond well, but just don’t offer the comfort, which negates the convenience in the first place.

The controller offers a headphone/mic jack, but my experience was not so great there either. Whenever I joined a chat party, some of my friends said that they could hear all of my audio input. If something happened in a game I was playing, they could hear it. They heard echoes of other people in the party and it didn’t matter if I used a wireless headset or different types plugged into the controller. I can’t honestly say I know what happened here. I could have accidently changed a setting, got a defective audio jack, it could even be a general flaw in the controller. I don’t have that answer, but it needs to be mentioned. I had no problem with in-game chats, just the chat parties that were created separately.

The Nacon Revolution is a solid controller that grows on you. For the things I find wrong with it, I have to say that there is no controller out there that has made my aim in FPS games, as accurate as the Revolution. The quick response over wireless controllers, makes up for a lot of cons, but this controller won’t do you much justice in games outside of the FPS genre. While it is intended for tournaments, not all tournaments are FPS and it would have been nice if the controller offered a slightly smaller size. It’s just a little too big.

I personally like this controller a lot, but only in small doses. Because of its faults, I have to rate this controller a 6.5 out of 10. The price is too expensive for what it offers and I think many gamers will find discomfort with it. If you were to use this strictly for LAN tournaments, it’s worth the investment, but outside that realm, this controller won’t revolutionize much. This controller is currently available in Europe and will be coming to the USA soon.