Neptune Flux brings us exactly that. A story-driven undersea adventure that can be played in the haunting serenity of VR, or on a standard TV. Is this game something you should dive into? Let’s find out!

Humanity Seeks Sanctuary in the Sea

The story in Neptune Flux is set up by the protagonist, Sarah, in an opening narration. The world is in turmoil. The surface is no longer inhabitable, so a company named A.Q.U.A has capitalized on the new market of undersea colonization. With space out of reach, the oceans are our only hope.

She has returned to the oceans to work as an employee of A.Q.U.A and live out her dream of helping secure a future for humanity. As part of Sarah’s backstory, we learn about the disappearance of her mother, and the resentment she feels toward her for leaving them.

With a solid script and voice acting, Neptune Flux sells its world really well. Sarah herself is a sympathetic character who you immediately connect with. While the story is only a couple hours long at the most, it has enough development to get you invested, but not enough to truly become immersed in the world. I really liked the concept, and Sarah’s character was very interesting.

The fact that Neptune Flux was developed by one person is astonishing. Nick Pettit and his development studio, Zoxide Games is one to watch. I would love to see a sequel set in the same universe with more development and a broader scope.

As it stands, Neptune Flux has a very intriguing setup and a story worth experiencing for its solid writing and voice acting.

Neptune Flux can be played with PlayStation VR or on a standard screen. While the gameplay is largely the same both ways, the VR option is far superior from an immersion standpoint. This is especially true if you have headphones to wear while you’re playing.

For the duration of your time under the sea, you explore the depths in a one-person watercraft. Staying within the immediate vicinity of the A.Q.U.A base keeps your batteries charged, but if you venture outside of the power grid, you’ll be running on battery power.

While initially, this was a bit of a constraint for me, I found that continued missions and exploration yielded more ways to explore and stay out longer. Other power sources, for example, can recharge your battery while you’re out in the open ocean. 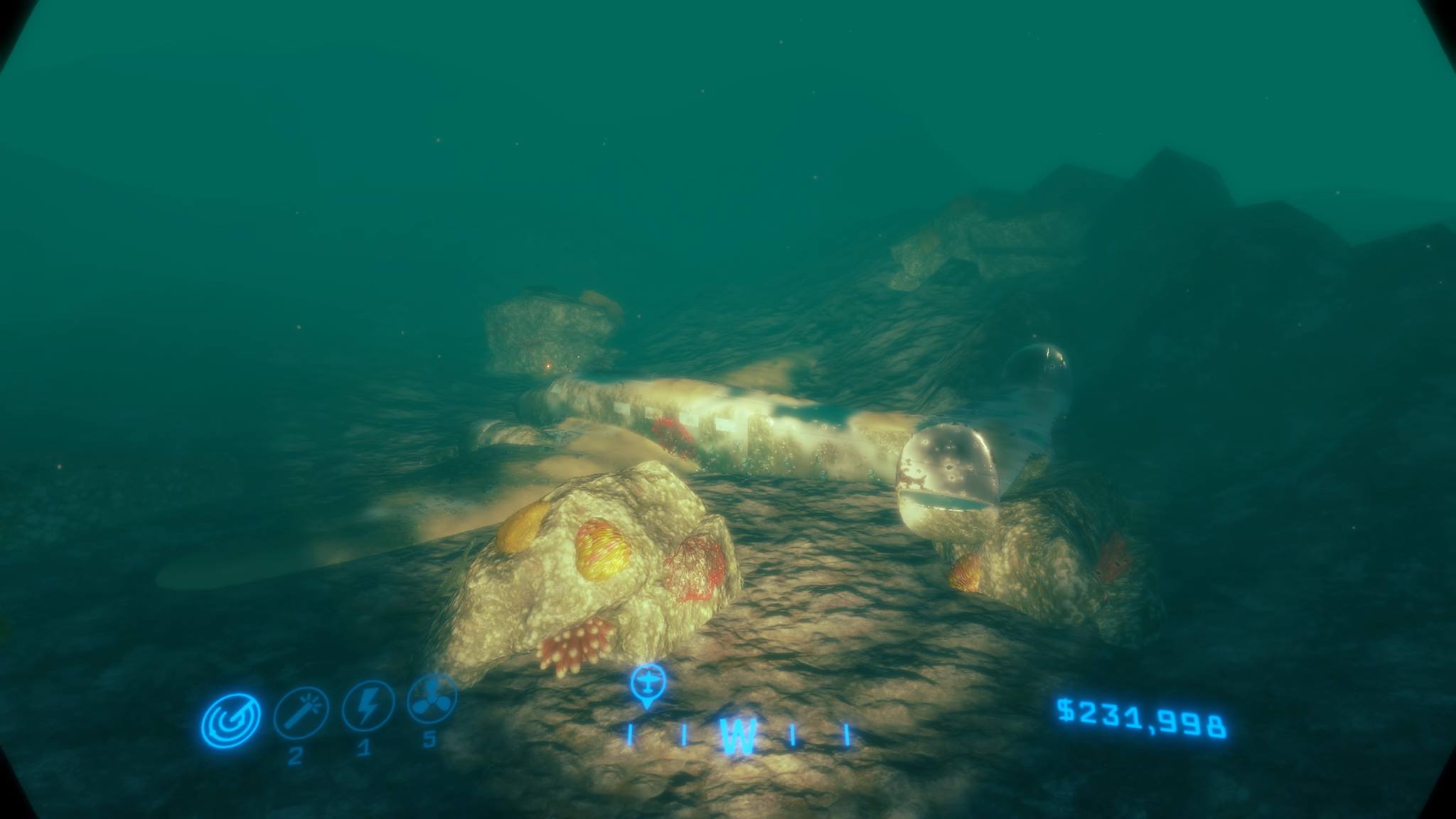 You earn currency in the game by scavenging cargo boxes on the ocean floor and completing missions from A.Q.U.A. This is used to buy consumables like speed boosts and flares to light darkened areas. You can also purchase a couple upgrades.

With both primary missions and side missions, you can spend anywhere from an hour, to two or three in Neptune Flux’s world. It lets you take things at your pace, and explore at your leisure. There’s some light puzzle solving as well, but it’s mostly about the quiet serenity of exploring the open ocean.

The general exploration is nice and relaxing, especially with the added benefit of VR. Being able to look around your vessel and stare out into the ocean is truly mesmerizing. It still has some of this effect on a standard TV, but the impact is lessened by the lack of true immersion.

Beyond the solid execution and controls, what I really liked about Neptune Flux as a whole, was the sense of structure. Many of these exploration-style games lack direction, and Neptune Flux manages to avoid boredom by giving you something to do at every moment, while also letting you explore to your heart’s content.

I would have liked to see more depth to the mechanics. There aren’t very many upgrades or consumables, for example. Puzzles are few and far between as well, so more of those would have been welcome. It’s really just a case of having a great foundation and wishing there was more to see and do. Neptune Flux has a simple presentation that focuses on very specific details. The cloudy waters mask the path ahead, while the ocean floor is dotted with rocks and sand. Things like cargo containers, sunken vessels, and crates of salvage pop out as you explore the large open areas.

I would have liked to see more fish and other sea creatures. The world feels barren at times, but perhaps this is a result of the calamities that have affected the surface. That being said, the barren landscape makes the landmarks stand out even more as you discover them.

In particular, a sunken statue I found during my travels had me quietly thinking about where it came from, and the world above. These moments thoughtful contemplation are the highlights of Neptune Flux.

All of this is fueled by the excellent soundtrack. It’s extremely subtle, relying mostly on synthetic sounds and low tones, but it’s that restraint that makes the atmosphere so powerful in Neptune Flux. The soundtrack blends perfectly into the gameplay, offering an audio backdrop that perfectly captures the mystery and loneliness of the game’s world and Sarah’s ship for one.

That’s not to say the soundtrack is all quiet tones and subtle soundscapes. There are times when the music will soar into crescendos that arc across the low undertones. It’s the perfect soundtrack to pair with the game’s world and story.

While it’s not incredibly long or in-depth with its mechanics, Neptune Flux is priced right. The level of polish and quality here is insane given the size of the development team (one person). It’s a serene and contemplative experience best enjoyed in VR, but worthwhile for anyone who wants to explore the infinite depths of the ocean and listen to an incredible soundtrack while they do it.