Housemarque is a studio known for their arcade shooters. Every time they release a new PS4 game, fans of the genre rejoice. There's a certain level of expected quality and polish that comes with the Housemarque name.

Now that Nex Machina has arrived, do we have a new standard for twin-stick arcade shooters, or does this game fall to the machine hordes that infest its world? Having played this arcade shooter until my eyes were about to bleed, I'm ready to answer that question.

A Futuristic Yet Familiar World

Nex Machina takes place in a future where humans have become so dependent on technology like smartphones and portable devices, that they failed to see the rising machine threat all around them.

Now, the machines have attained their own consciousness and decided that we are no longer needed. They've begun doing what all good robot overlords do, and started eradicating all human life from the planet.

You play as one of the brave few who dare to stand against the machines and fight back. A simple premise, but twin-stick arcade shooters are never known for their story.

These types of games are about building a world where it makes total sense for one character to eradicate and obscene about of enemies while dodging more bullets that Neo in the entirety of The Matrix series.

It's worth noting that Eugene Jarvis, famous for his work on classic arcade games like Robotron, was a creative consultant on this project. Does his influence shine through in the gameplay that made him such a legend in the early days of twin-stick shooters? In short: absolutely.

I don't think it's too hard to tell that Nex Machina is something special. Simply watching gameplay will demand your attention and pull your eyes towards the screen.

Playing is an entirely different story. While spectators may be wowed by the constant explosions and bright flashes of color, when you're playing, the rest of the world fades around you. Nex Machina demands every ounce of attention and focus that you can muster, even on the easiest difficulty.

In true twin-stick shooter fashion, you move with the left stick and aim/fire with the right stick. The controls here are tight, precise, and beautifully executed. Movement is smooth, weapon aiming and hit boxes are accurate down to the atomic level, and things are just incredibly fun.

The dash ability allows you to get through laser barriers and strategically place yourself in key parts of the maps with ease. Upgrades and secondary weapons can also be found in hidden areas and destructible boxes in the environment.

The game is divided into 5 worlds, each of which have multiple areas and a boss fight within them. The levels are structured into a series of small to medium-sized maps that you seamlessly transfer between as you destroy countless enemies. 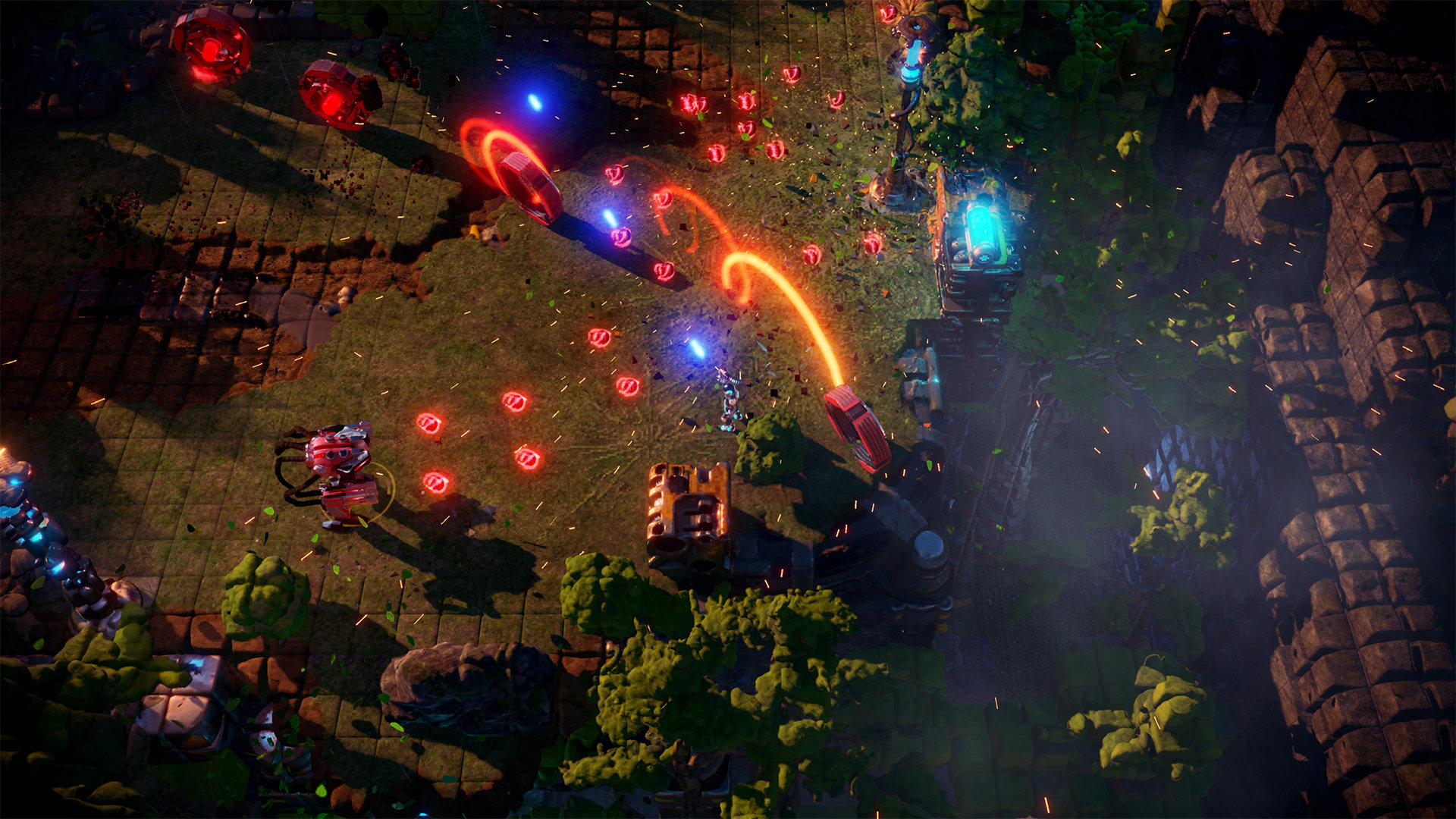 As an example, you'll fly in and land as enemies spawn immediately. You fight your way around the area, looking for pickups and fellow humans to rescue. When all the enemies have been defeated, your character leaps into the air and flies directly to the next area where you land and fight the next wave of enemies.

This continues until you reach the boss. You'll have a pool of lives to pull from, but in true arcade fashion you die in one hit. Whether it's a projectile or an enemy coming into contact with you, one hit is all it takes.

Of course, a shield pick up will give you a bonus hit, but once those lives are out, you hit a continue screen. Depending on your difficulty, you may have the ability to continue and try again from the area where you left off.

The flow is smooth and relentless. There's no breaks from one area to the next. You're fighting until you reach the boss and destroy them. The only breathers you get are between the five worlds.

To say that Nex Machina is an adrenaline rush, is to say that gamers are kind of passionate about their games; it's a huge understatement. This game gets your palms sweaty, your heart racing, and treats you to more eye candy than any other arcade shooter in recent memory.

There's a nice variety of enemy types, plenty of secrets, and a good curve as you move up through each level of difficulty. Beyond the main story mode, you can also play through each of the 5 worlds in local co-op, which works great.

Finally, there's the arena mode, which takes the same worlds and adds new twists/challenges. These challenges offer gold coins that you can use to unlock customization options and additional challenges.

This mode, combine with the leaderboards, is where Nex Machina will find its legs. I also firmly believe that the quality of the gameplay and level design will keep people coming back to try that next difficulty or top their high score.

If there's one complaint I have, it's that the secondary weapons lack of a lot of variety. Some are far more useful than others. The rocket launcher, for example, is far mightier than the sword. I would have liked some more options here, but I can't deny that I had an absolute blast with Nex Machina.

Nex Machina is easily one of, if not the most gorgeous arcade shooters ever released. The palette of colors on display is nothing short of stunning. Each of the worlds has its own theme to the visuals. Whether it's the lush greens and deep browns of the first world, or the neon blues and reds of a later level, Nex Machina is never a slouch in the visuals department.

When enemies fall to your laser barrage, they explode into thick pixel chunks that scatter across the ground. The carnage is satisfying, visceral, and near-constant.

Given the amount of action happening on screen every second of the game, you would be forgiven for expecting some frame drops, but on a PS4 Pro, Nex Machina ran like a dream. The performance was perfect on every level for me.

Gorgeous graphics and excellent performance. What else could you ask for? In this case, a soundtrack worthy of the game it scores. Nex Machina delivers on this front as well with a high-tempo score that combines rich bass with thundering synthetic melodies that rival the greatest of sci-fi soundtracks.

It's music to match the action and it completes the wonderful trifecta that is Nex Machina's presentation. You literally could not ask for a more polished and pristine arcade shooter.

Would I have enjoyed some more story, more variety in the secondary weapons, and a few more worlds? Absolutely, but with this kind of game, you're always going to want more.

Arcade shooter fans both casual and hardcore, and even those who usually don't like these kinds of games, all are welcome here. Nex Machina not only raises the bar for the genre, but also solidifies itself as a modern classic.