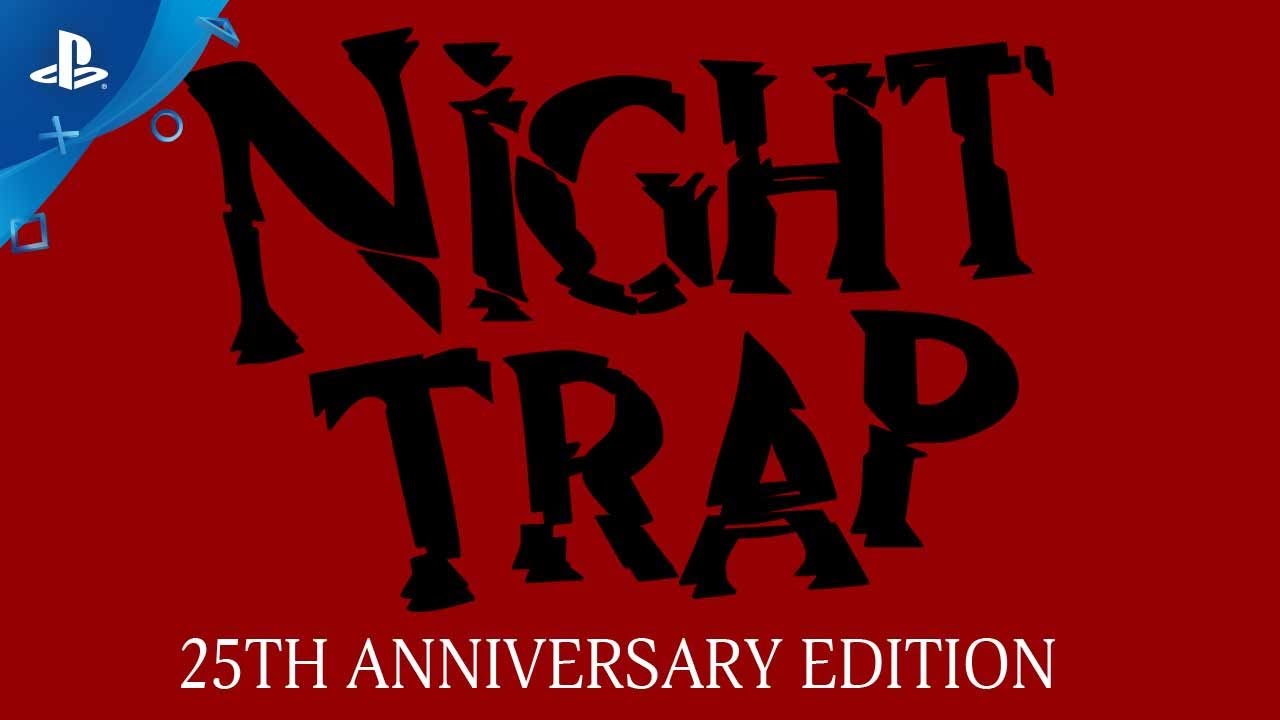 Full motion video or FMV is a technique often used in older games and sporadically used today. It allows developers to incorporate pre-recorded video into a game, thus offering real life graphics as opposed to rendered ones.

One of the most well-known uses of this technique from the early days of gaming was Night Trap on the Sega CD. Now, we have a 25th Anniversary Edition of the game you can play on PS4 with new features and some behind the scenes content. Is it this a remake of a classic, or did this game not age well? Let's find out!

A House Full of Teenagers and Vampires. What Could Go Wrong?

Night Trap is classic B movie horror. You play as a member of the Special Control Attack Team, which is unfortunately abbreviated as S.C.A.T. Your team was investigating a series of disappearances at the Martin winery estate.

The Martins themselves were questioned by police and told them all the girls in question left safely. That's when S.C.A.T. was called in and discovered that the house was wired with traps and security cameras that could be controlled from within the house.

You play as a member of the team who has been spliced into the camera feed and given control over the traps within the house. As a new group of girls comes to stay the night, one of which is an undercover agent, your goal is to keep them safe.

The house is not empty, which is why you'll need to use its traps against the Augers (vampires in all but name) that are coming to kidnap the girls.

Based on how well you do, you'll get one of several endings. You can also fail completely if too many Augers get into the house. It's a pretty unique story, all things considered.

During your playthrough, you'll need to switch between camera, and the events of the game will still play out in real time as you monitor the house. As a result, you're going to miss events that happen while you're trying to keep the girls safe since they'll be happening on other cameras.

While this would normally be annoying for completionists, Night Trap: 25th Anniversary Edition has a nice suite of bonus features that include a theater mode for all viewable story moments. This is unlocked when you finish a perfect playthrough of the game.

Other bonuses include an interview with the original creator of the game, production images, and even some deleted scenes. You can also play the unreleased prototype for the game called Scene Of The Crime for the first time ever.

Beyond the main story mode, which can be beaten quickly once you get the hang of things, these bonuses features and playable prototype add a good amount of value to the experience, especially for fans of the original.

Five Nights at The Martins

It's not hard to see that modern games like Five Nights at Freddys took inspiration from Night Trap. The 25th Anniversary Edition plays in a very similar fashion, with an option for a much more modern layout, included animated thumbnails.

In the original game, the thumbnails didn't show live video, so you had to cycle through constantly to see if any Augers were getting in. Here, you can see everything happening in real time and switch cameras on the fly to deal with threats.

I like the idea of Night Trap: 25th Anniversary Edition a lot, except for one major flaw that I discovered early on. While the game gives you a controls menu, there's absolutely no instruction that I could find on how to play.

Obviously, there are traps that you need to find and trigger, but the colored lights on the game's UI were left unexplained. I had many a failed attempts before I finally went online to look for help.

I don't think games should hold your hand, but no instructions on how to play seem like a big oversight in my opinion. You'll need to time your traps based on your knowledge of where they are in each room. You'll get cues from the lights on your screen in the game, but knowing where they are is more efficient for timing.

The colors you can cycle through will be changed throughout the game, so you'll need to listen to the dialogue to find out which color is the current one to use when triggering traps.

If the game had a more thorough tutorial, it would have saved a good amount of frustration. Once you understand how it works, though, you just need to get your timing down so you can hit the button at just the right times.

While you'll only use a couple buttons throughout the game, timing is everything in this game. Practice makes perfect, so expect to play a few times before you get the perfect ending.

With multiple endings and the option for both modern and classic UI, this is a very comprehensive remake that clearly had a lot of care put into it. The lack of a tutorial is a shame, but if you're a fan or a curious gamer, it's worth a shot if you can find a good guide on how to play. 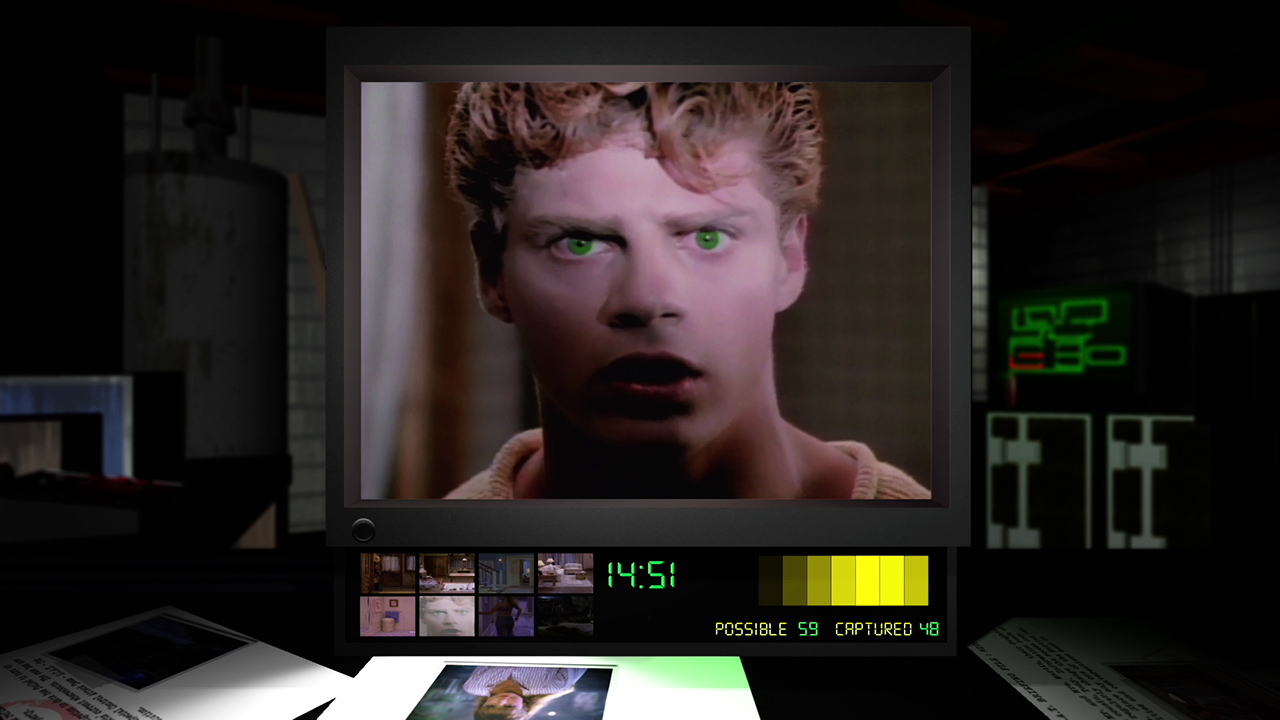 The original Night Trap's FMV footage looked good by those standards, but by today it would be atrocious. Thankfully, Screaming Villains has brought the video quality into a more modern look for the Night Trap: 25th Anniversary Edition.

The cheesy outfits, haircuts, and laughable Auger costumes are all very hard to take seriously, but I personally loved the old school cheesiness of it all. The acting is fairly decent, given the B movie feel, and the commander of the S.C.A.T. team takes his role way too seriously.

It's great if you like that kind of feel, and you don't mind the low production values. The rest of the game is rendered in modern HD, and the option for active camera thumbnails makes it a lot easier to monitor the house.

The soundtrack is also extremely reminiscent of the time. With muted percussion and electronic music, the main theme itself sounds like a classic song from that era.

While Night Trap: 25th Anniversary is one of the more unexpected remasters to come out on the PS4, but as a gamer who loves to experience the classics, I appreciated all the care and effort that went into this remake.

It's certainly not for everyone, and perhaps most appreciated by fans of the original, but if you don't mind go elsewhere to learn how to play, Night Trap: 25th Anniversary Edition is a faithful remake and a cheesy blast from the past.

A copy of Night Trap: 25th Anniversary Edition was provided to PS4 Experts for review purposes