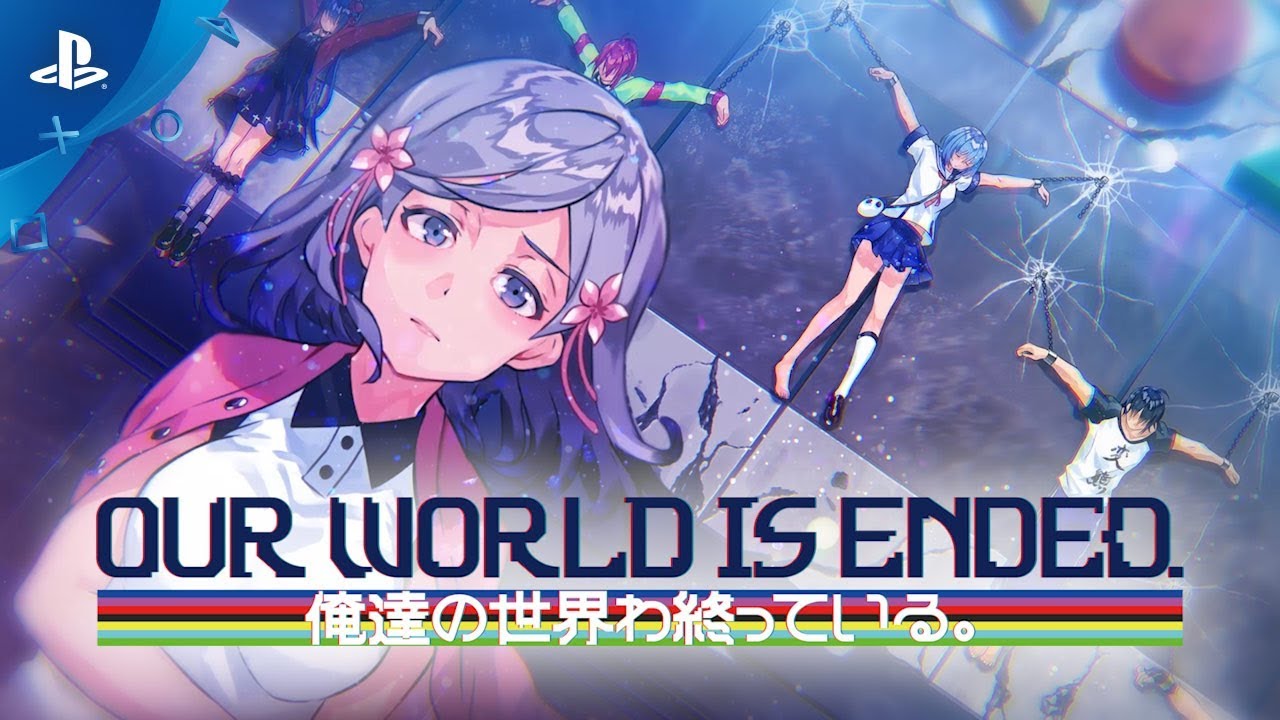 Visual novels have taken a lot of different forms on the PS4. Whether it’s shocking mysteries, touching stories, or a unique combination of genres, these narrative-focused titles offer more than a simple book to read and require less engagement than something like a shooter. They are like video game comfort food: fun and interesting, but not too taxing.

For those who haven’t played many visual novels, Our World is Ended seems like the perfect starting point. It’s not based on an ongoing series, it’s not tied to an anime, and it has a wholly unique world for players to jump into. Should you jump into the shoes of Reiji Gozen and unravel the mystery behind Judgement 7’s newest augmented reality title? Let’s find out.

A Tale of Two Worlds

Our World is Ended takes place in a modern version of Asakusa in Tokyo, Japan. You play as Reiji Gozen, a part-time member of a game studio called Judgement 7. Working with the other team members, you begin the game by testing a new augmented reality headset.

The program it uses is called the W.O.R.L.D program, and it’s set to be a revolutionary step forward for gaming as a whole. The opening prologue of the game introduces you to the studio’s head Sekai Owari, who is a self-proclaimed pervert and quite proud of it.

Then there’s Yuno Hayase, an assistant at the studio who is described as an airhead, but her innocence seemingly blinds her to many of the things other characters say or do, which makes her look naive. Thankfully, her older sister Asano Hayase is fiercely protective. As the studio’s sound designer, she has a great ear for music, but she’s also completely tone deaf when it comes to singing out loud.

Rounding out the cast are the stoic and anti-social designer, Natsumi Yuki, a remote worker named Tatiana Alexandrovna Sharapova,and the eccentric writer, Iruka No.2. You’ll come across others in your journey, but I won’t spoil them here.

It’s quite the eclectic cast, and that’s perhaps the strongest quality of Our World is Ended. The characters have strong personalities, for better or worse, and develop well over the course of the journey. New characters join the fold as events twist and turn into the realm of science fiction very quickly.

During the prologue chapter, Reiji is working with Sekai over a remote connection as he tests the functionality of the augmented reality headset the studio is working on with Yuno. It’s not long before the studio’s head reveals his dirty mind as he teases the ability to put a bathing suit on Yuno using the technology.

Things take a turn for the worst, however, as the program glitches out and shows Reiji a terrifying scene. I won’t spoil that, of course, but this glitch sets the framework for a story that mixes reality with the world of gaming in some pretty unique and interesting ways.

As a lifelong gamer, the setting and story of Our World is Ended was immediately interesting for me. It’s fun to be a fly on the wall of a game studio as they prototype their next idea, and the sci-fi twist keeps you engaged in the high-stakes story throughout each chapter.

Unlike other visual novels I’ve played, Our World is Ended has pretty solid pacing throughout. While other spend too much time on exposition, this title moves pretty quickly through each chapter without ever dragging its feet too much.

I will say that later chapters did have some lulls, but the overall pace of exposition and dialogue felt more consistent than I’m used to with this genre. Whether you’re a fan of visual novels or not, this next portion of the review is important as it will help you decide if this is right for you.

As I mentioned earlier, the leader of Judgement 7 is a lascivious person who is constantly make lewd and sexual jokes about the female members of the team or just in general. Now, this kind of brazen sexual humor is pretty standard for the otaku subculture in Japan, as anybody who watches anime or reads manga would know, but it’s not a style of humor for everyone.

Personally, the majority of the jokes and snide comments were all in good humor for me, especially when Sekai or others were verbally and physically abused by characters like Asano in return for their comments. It’s not like the women in the game simply allow this kind of behavior, so there is a balance between character reactions.
While I’m all for different types of humor, there are times when Our World is Ended doesn’t know when to quit. In one of the early chapters, for example, a character appears whose entire personality and purpose is to serve as a running joke regarding Judgement 7 leader’s perverted tastes.

It all ties into the world just fine, but it made for some truly cringe-worthy moments, especially with other people in the room. Despite the moments when the humor pushes too far over the line, the vast majority of my time with Our World is Ended was quite positive. I wish the writing had leaned a little more into characters and story, and less into otaku tropes and sexual humor, but if you don’t mind that type of comedy, it won’t bother you too much.

From a gameplay perspective, Our World is Ended offers very little beyond clicking through exposition and dialogue. There is a response system called S.O.S (Selection of Soul) that has different dialogue options fly across the screen, giving you limited time to choose one.

These choices affect character relationships, but little else. I don’t expect too much interaction from a visual novel, so this wasn’t very surprising, but it would have been nice to see some larger effects from your decisions like multiple endings.

Overall, Our World is Ended is a solid visual novel with a great premise and solid characters. It does tend to lean a little too much into its sexual humor to the point where it becomes overdone, but those with the right sense of humor will enjoy this look into Japanese culture and the world of game development.

Our World is Ended is no slouch in the art department. Character models are highly detailed and stylized, while environments are varied and detailed as well. There are a good number of animations and poses for each person as well, which offer some expressive emotion during scenes.

The music is fun and upbeat, while the japanese audio does a great job of delivering each line. From a presentation standpoint, there’s a lot to love here. I did notice a few typos in my playthrough, but nothing that derailed the sentence. Still, typos in a visual novel are never great to see.

I also found a few instances where the white text on a semi-transparent background made it hard to read certain words when someone was standing in the background wearing white. It didn’t happen very often, but a more opaque background may have eliminated this issue entirely.

While Our World is Ended doesn’t reinvent the visual novel genre, it does bring a lot to the table that I enjoyed, particularly its world and characters. Whether you’re curious about these types of games, or you’re looking for a new story to grab your attention, Our World is Ended offers a tale worth experiencing.