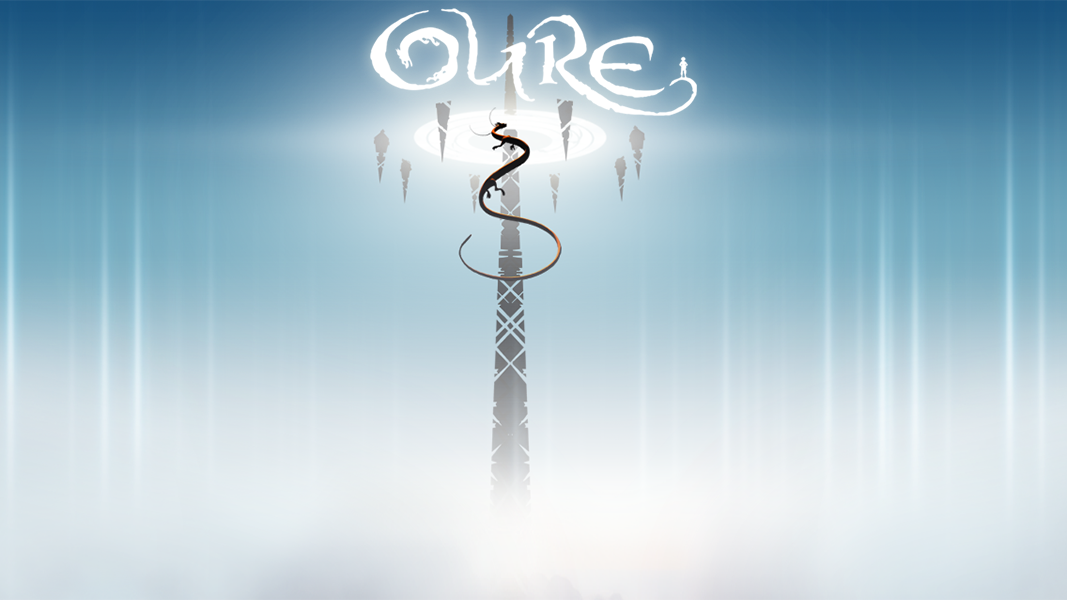 Whenever I see a game with a beautiful art style, soaring music, and a protagonist shrouded in mystery, I'm reminded of classics like Journey, Flower, and RiME. Oure is another game in this sub-genre of exploration, artistic visuals, exploration, and a mysterious protagonist.

In Oure, you play as a young child who has the ability to transform into a dragon at will. You are tasked with finding and awakening the mysterious Titans who may have the power to save the broken world you came from. With plenty of collectibles, boss fights, and puzzles, does Oure manage to reach the same pedigree as the games that inspired it?

A Kingdom Above The Clouds

After the opening cutscene and tutorial, you find yourself thrown into a magical landscape above a sea of clouds. You start on a massive tower that stretches into the sky. In every direction, you can see ancient black structures and shapes piercing the clouds beneath you.

Oure allows you to transform from a child to a dragon with the press of a button. As a long and slender dragon, you can fly through the clouds, and explore at your own pace.

From a story perspective, Oure offers a lot more content than most of its contemporaries. It begins with a strong mystery and a task to awaken the Titans. Your parents send you through a portal to this strange world above the clouds as the only savior left for their world.

Your protagonist doesn't speak very often, but a narrator often chimes in to provide the story. In a cool stylistic choice, dialogue appears as a strange language before translating into English before your eyes. This illustrates the foreign nature of the world and the lore being told to you.

You'll receive regular story beats after the fights with each Titan, but much of the backstory is told through simple puzzles you can find in the environment.

For example, you'll often come across a line of structures or a path that takes through multiple objects that you can activate by flying near them. By flying fast enough and activating all of them, you can trigger moments where dialogue appears as text on your screen, explaining some aspect of the Titans and the nature of their purpose.

I was able to learn a good amount of the game's lore from these unlockables. Combined with the trickling story you get after fighting Titans, and Oure is far more forthcoming with its story than most other games like it.

When you finish the game, you can start a New Game+ as a new character and experience some new dialogue and perspective, but largely the same experience otherwise. It would have been interesting to have the New Game+ offer more differences and perhaps a "true" ending, but this isn't the case here.

While I did enjoy Oure's story and the backstory it offered, the overall plot didn't have that hook that I like to see from these games. The themes it portrays are familiar and interesting, but it never hits that "wow" moment that changes everything.

Even so, I enjoyed the story in Oure a lot, and I think the world it portrays has more to offer. There were some interesting mysteries mentioned in the backstory that I would have liked to see fleshed out, for example.

As a whole, it's a good story, but it didn't blow me away. Let's see how the gameplay holds up.

The world of Oure is quite large. The game's content overall was far more than I expected from this kind of game. Not only are there 750 total blue orbs to find, but you can find other colored orbs to upgrade your stamina and other aspects of your character.

While some may find it tedious, I rather enjoyed wandering through the clouds and finding new structures or tunnels that led into fluffy caves. Using specific pads, you can change back into human form and do some light exploration that way.

Jumping is automated and awkward, but thankfully you don't have to do it much. Flying as the dragon feels great, but the camera can clip into the environment or spin out of control if you get yourself wedged in a tight space.

These moments weren't constant, but they did provide some frustration. Beyond the exploration and collectibles, which include orbs, the aforementioned slices of backstory, and objects that resemble the Titans, your main goal is to power various towers.

These towers are connected to platforms by black cables that lead you to the activation point. Once powered, you can climb these towers to initiate a fight with a Titan.

These encounters start out pretty simple. You must fly to the crystals on the Titan as it runs from you. Once you latch on to the crystal, you must solve a simple puzzle where you navigate a number of spaces and end on a diamond space within a certain number of moves.

These puzzles, and the Titans themselves, get much more difficult as the game goes on. I always thought the mechanics were interesting, but some were more frustrating than others. For example, one of the later titans requires you to curl into a circle to trigger the puzzle elements.

Curling isn't difficult, it can be done with a single button. The issue, was that I would often drift from the place where I started curling before the mechanic was triggered. This resulted in me hitting a different switch than I had intended.

There are little quirks like this that made some of the Titans frustrating. Some of the final puzzles with the dotted lines and diamond spaces were truly difficult as they required you to go back into spaces without failing by hitting a dead end.

It took me a while to realize I could even do this. Despite these things, I thought the Titan fights were intense and exciting for the most part. Even if others found it tedious, I also enjoyed wandering the open world and finding collectibles. This was especially true of the ones that boosted my stats.

Vibrant Visuals and a Unqiue Style 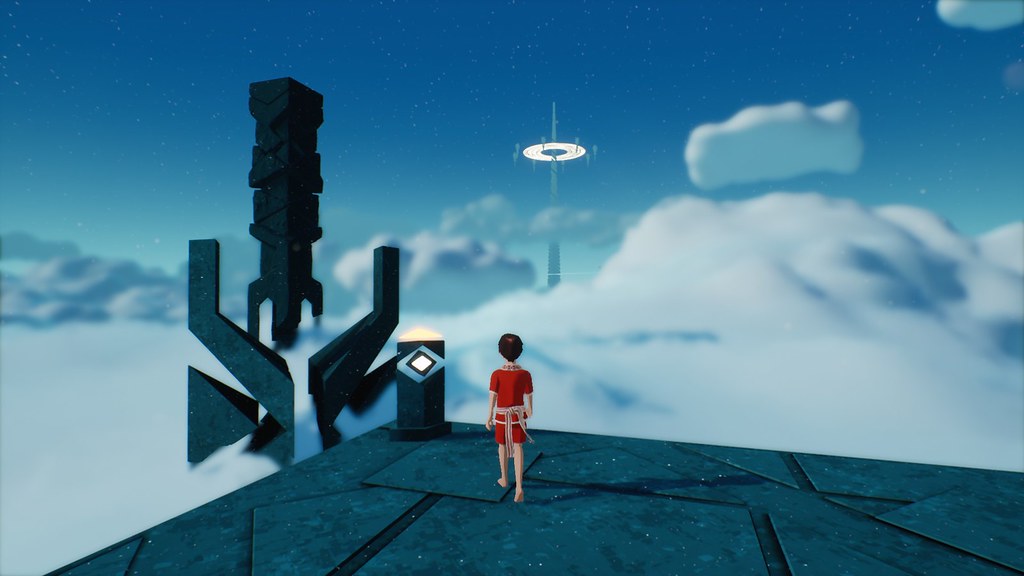 Oure has a unique and vibrant art style. The painted graphics pair well with the mixture of cool and warm colors as the open world shifts from sunny, to twilight, to rain.

The Titans themselves all have hard edges that form familiar animal shapes. They are impressive in both scope and size. The animation as you leap from ledges and transform into a dragon looks and feels great.

The ancient and enigmatic architecture of the game's structures also works well against the white backdrop of the games wonderfully rendered clouds.

In regards to the music, Oure uses a soundtrack that channels Austin Wintory and David Garcia through its use of cello, violin, and woodwinds. It reminded me of excellent soundtracks like the ones in Journey and RiME.

The composer, Ian Livingstone, brings his own unique style to the soundtrack with an upbeat theme that matches the sense of speed you feel while flying at high speeds through the clouds. I particularly enjoyed the use of percussion and bells to add that exotic sense of the unknown.

This paired with the strings to create a lofty soundtrack that complements the scope of the game's Titans and the massive world above the clouds.

It's an excellent soundtrack that often reminded me of whimsical fairytale melodies, which perfectly matched the nature of the visuals. Both the soundtrack and the overall presentation are in top form here.

While Oure doesn't quite match the emotional impact of similar titles, it does create an experience that can last several hours and multiple playthroughs. It is a majestic and beautiful game that appeals to both puzzle lovers and collectible hunters alike.

It has a few flaws, but nothing quite beats the exhilaration of soaring t hrough the clouds as a dragon.

A copy of Oure was provided to PS4 Experts for review purposes. Version was tested and reviewed on a PS4 Pro.