Having lived in apartments for the vast majority of my life, I cannot understate the pure rage that one feels when their neighbors are being inconsiderate and making a ton of noise. Yes, this applies to poorly timed parties that go on into the night (my last neighbors were a big fan of drunk karaoke).

Party Hard 2, a new stealth action game for PS4, takes the unique premise from the original and elevates things in several significant ways. The idea is still the same: go to parties and wreak havoc by killing people and getting away with it. It’s a double-dose of dark humor, but something about being the Agent 47 of obnoxious parties has a certain allure to it. Let’s find out if you should don the mask and join the revelries!

A Killer Party, but Frustration May Trash The Place

Party Hard 2 does include a story that reflects on events leading up to an interview on live television, but the story could have benefited from more attention and budget. I enjoyed the concept, but I was admittedly a little disappointed when other unlockable characters received the same story scenes as the main protagonist.

It’s not a huge issue, but when you factor in the low-budget feel of the cutscenes, I expected there to be more of them as a result. Instead, the story offers some context between levels, but never really takes advantage of the unique premise to get inside the head of a serial killer that just wants some peace and quiet. They’re mostly there to move things along and set the stage for the next slaughter.

For that purpose, they do well enough, but I couldn’t help feeling like there was a missed opportunity to add some additional impact to the story, or at the very least open it up for multiple perspectives with the other unlockable characters.

The gameplay in Party Hard 2 does manage to capitalize on the premise in a lot of ways. Each level is a veritable playground filled with unsuspecting victims and tons of ways to cause unfortunate (or from your perspective, happy) accidents. While I didn’t play much of the first game, it’s apparent from the start that Party Hard 2 wants to be a deeper and more flexible experience.

For starters, the objectives give you options. Instead of just killing everyone, you can opt for the choice to only eliminate a certain number of people within established groups (bikers, drug dealers, etc.).

The addition of a “party vision” also lets you quickly see anything that's interactive in your vicinity. A helpful way to establish your options and plan out your strategy. Ultimate abilities for each of the characters give them a unique feel from a gameplay perspective, and crafting makes a debut as well. Picking up a few objects and quickly turning them into something usable like a molotov cocktail will bring a sadistic smile to anyone’s face.

The environments are fairly expansive as well, allowing you to set up interesting situations like sending a car careening down the road into a group of bystanders, or rigging a device to explode just as someone walks by. Discovering, planning, and implementing these series of events will appeal to anyone who likes to experiment with a game’s environments to achieve the desired result.

All of this works well, but Party Hard 2 is an unforgiving mistress. Witnesses will run with a speed you cannot match if you’re spotted doing something, and before you know it the cops will be rushing through the level to arrest you. Failure came often for me, and while I was sometimes able to scrape by, most of the time it felt like I would quickly go from a top-tier session to a game over before I could blink.

The ability to react more effectively in these types of situations would have been nice. It felt like, after a certain point, I was simply waiting for the game over screen. Everything leading up to those moments was so flexible, it was disappointing to see how little recourse I had when something as simple as a witness spotted me in the act.

The option to bring in a co-op player is appreciated, and leveraging this second player can be a huge boost to your plans to end the party early. Despite the difficulty that can border on frustration at times, there’s no denying that a plan going off without a hitch is quite satisfying in Party Hard 2. 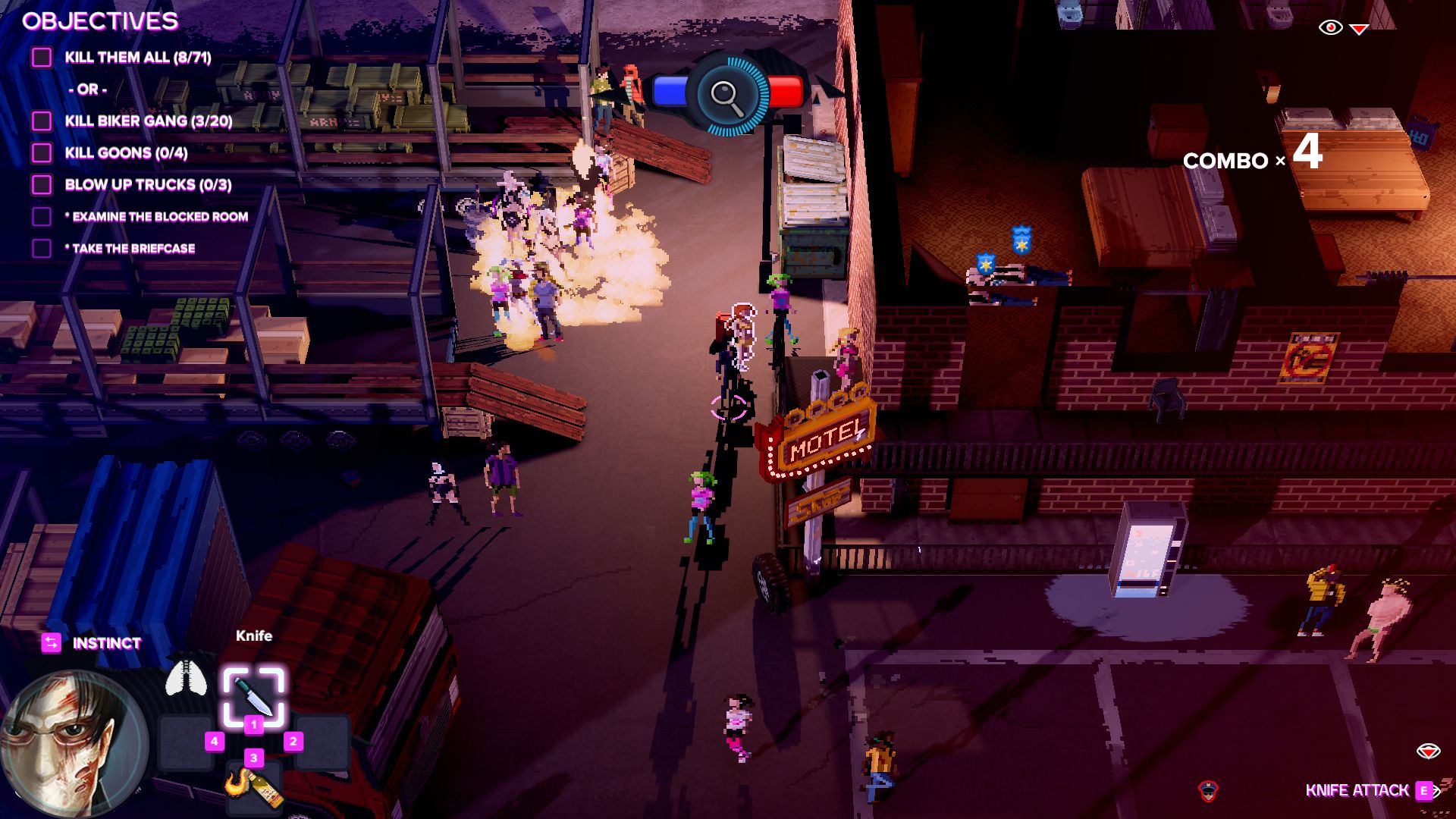 The best part of Party Hard 2 for me is the new 2D / 3D hybrid style that differentiates it from the original game. It still retains the retro look of the first game, but the addition of depth and additional detail to the environments makes everything pop from a visual standpoint.

An upbeat soundtrack also keeps things interesting as you’re weaving through bars, night clubs, and other locales in search of your next target. It all works very well from a presentation standpoint, but Party Hard 2 isn’t for everyone. The story fails to truly capitalize on the premise and the gameplay, while in-depth, feels a little too unforgiving at times (even with the easier character option).

As an evolution from the first game, this feels like a better sequel in almost every way. For the next entry, I would love to see a story that pulls you into the world, and a little more flexibility in how you handle or recover from minor mistakes.

In the meantime, fans of the original should absolutely check this sequel out. Those who enjoy playing as a certain hitman should also find some fun similarities here. Party Hard 2 is out now, so don’t hesitate to join the festivities if it interests you, but be prepared for plenty of rained-on parades in your pursuit of perfection.

A copy of Party Hard 2 was provided to PS4 Experts for review purposes.