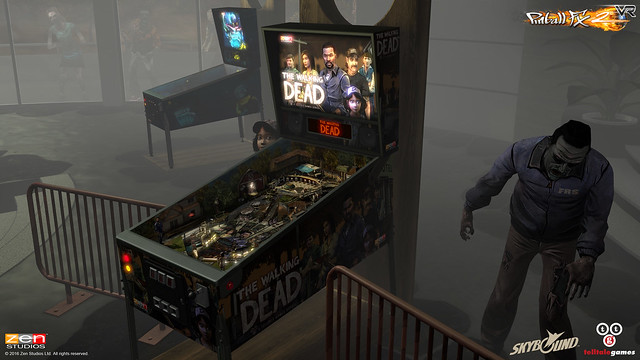 Zen Studios has long been known for making what are arguably the best pinball video games ever to hit the consoles. These developers are the true pinball wizards of our day and age. So, you can imagine the intrigue that hit me when I found out that they were doing a VR version of their Pinball FX2 game for PlayStation VR.

Having spent some time with the base game, the season one pack of tables, and the Telltale Walking Dead Table, I’m ready to talk pinball. Does the experience benefit from virtual reality, or is this game better experienced on a standard TV? Time to find out!

Pay What You Want Pinball

Pinball FX2 VR works on a pay-to-play model. For the entry point of $14.99, you can get three tables included with the base game. These are Mars, Secrets of the Deep, and Epic Quest.

Once you’ve purchased this, you can start playing on these tables, but for an additional $24.99, you can get also get the season one pack which includes Castlestorm, Wild West Rampage, Paranormal, BioLab, and Earth Defense.

Finally, for $6.99 you can get the Telltale Walking Dead pinball table. It’s a great pricing model that lets you pay for exactly what you want. Anyone who is familiar with Zen Studios’ work will know that their tables are top-notch and they function the same way in VR as their 2D counterparts.

When you’re playing Pinball FX2 VR, you’re treated to an excellent experience that goes beyond simple tables in virtual reality. The game’s main menu has you standing in an exquisite apartment with a gorgeous view.

As you look around, you can access your hub via the television in the apartment. Three tables are placed in your immediate view that can be swapped out for any combination of the tables you own. Simply looking at one and pressing “X” allows you to jump into a game.

Now, Zen Studios could have easily just had you stand over a table in VR and call it a day, but they went the extra mile here. Each table brings with it a unique change to your environment. For Secrets of the Deep, you’ll be standing underwater and playing pinball as sharks and sea life swim all around you. For Wild West Rampage, you’ll see a cowgirl standing to your right as a steam train runs along a path around you.

You can look around and see how your apartment has changed to fit each table, and the environment itself will react to certain events in your game. For example, when I lost a ball in Secrets of the Deep, I saw a larger version of it descend next to me and a shark came swimming by to swallow it.

Pictured: Secrets of The Deep and the coolest shark I've seen in VR since Ocean Descent

My favorite example of this at work is with the Telltale Walking Dead table. When playing this, you can see series favorite Clementine standing next to the table as zombies moan all around you. I personally really enjoyed looking out my apartment window and seeing a line of hungry walkers clawing at the glass.

It adds an amazing level of immersion, but let’s talk about the tables themselves. These are the same options you saw in the standard version of Pinball FX2, but the VR versions offer the aforementioned feature a well as the ability to lean down and really take in the detail that each table offers.

They are all really unique as well, each offering different missions and objectives. The layouts are also unique, with winding paths and various art or figures on the tables themselves. To truly understand each table, a guide is included in the pause menu for you to see how each of the table’s unique missions are accomplished.

Top this off with leaderboards and you have a great iteration of an already perfect pinball title. If you recall Zen Pinball 2 on the PS4, then you’ll recognize these as the same tables, but under a different name and with new VR features.

The physics of the ball are perfect, and the interaction between the ball and the elements of the tables are also satisfying. While I would have liked a little more guidance in terms of the table’s missions, this is the same perfect pinball simulation you know and love, but with the added immersion and features of VR.

VR Pinball: Is This The Future?

I played Zen Pinball FX2 VR on the PS4 Pro and I was very impressed with the graphics. The tables have a ton of detail and even the environments around them have a lot of interesting parts. The way characters in the environment react to the events on the table really pulls the whole immersion factor together.

Being able to lean in and see the table up close is great for both gameplay and for curiosity. The only issue I encountered was a bit of drift when I leaned down and back up again. Oftentimes, the table would slide to the left in my view and I would have to recalibrate to get it back in front of me.

Simply holding the options button did the trick, so it wasn’t a major issue, but I did have to recalibrate more than a few times. Besides this small nitpick, I found the VR version of Zen Studios’ pinball game to be my preferred method of playing.

Yes, you do get sharper graphics on the standard Zen Pinball 2, but the slight dip in detail is more than okay, given the immersion and awesome environments that Pinball FX2 VR offers.

As always, I like to rate my reviews based on how well the game accomplished its promise, and not by comparing it to other unrelated titles. In terms of a pinball simulator, Pinball FX2 VR delivers 100% on that promise with amazing results. Combine this with the unique environments and the piecemeal pricing model, and you have an even more perfect pinball game that before.

The only complaint I have was the drifting issue, which I saw mentioned in other reviews. Beyond that, if you’re looking to get immersed in a good game of pinball, you can’t do much better than Pinball FX2 VR.