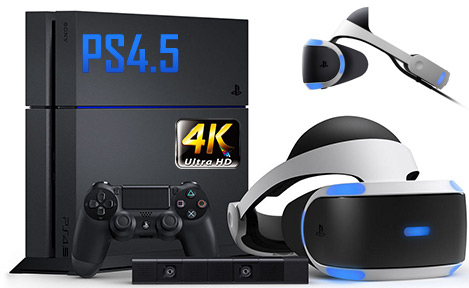 Every since gaming outlet Kotaku revealed the existence of a rumored PS4.5 with 4K capabilities and better hardware, the internet has been taken by storm. As more and more rumors come to light, it’s becoming more likely that this new system, codenamed “Neo”, is actually coming.

You may feel a mixture of things: anger, surprise, betrayal, but let’s take a step back and look at the big picture. Would a PS4.5, as the rumors describe it, be a bad thing for the industry? Let’s take a look at how this type of trend could be exactly what console gaming needs.

What We Know About PlayStation 4.5 and What it Means

Kotaku’s article was soon followed up by several others that added more detail to the overall picture. For starters, it’s worth noting that the PS4.5 will supposedly not have exclusive titles which is a relief. In a sense, every game will work on both versions of the system, but developer will allegedly be “required” to include a “Neo” mode that takes advantage of the better hardware.

For the most part, the hardware improvements are geared at two things:

Now, as someone who doesn’t have a 4K TV, but does have a VR pre-order, I’m nervous about how this moves forward. Even without it’s own games, it could cause chaos in the market, but that’s not what we’re here to discuss today.

In all honestly, a PS4.5 may cause immediate issues or concerns, but ultimately it will usher in a new age for console gaming. Let’s take a look at the reasons why this rumored console isn’t such a bad thing.

Why The Console Industry Needs PS4.5

Let’s assume the PS4.5 is coming. What does this mean for the console industry? It’s an undeniably massive change to the status quo, but should we be shocked? Let’s discuss three reasons why this console upgrade needs to happen.

I have nothing bad to say about the quality of the graphics on PS4, but from a technological standpoint, just about any modern PC can meet or surpass these specs without a ton of effort. Since the dawn of gaming, PC gamers have always held the belief that their gaming devices are superior because they can be upgraded at a moment’s notice. There is a price PC gamers have to pay for this, but we can save that for another article.

Even smartphones and tablets are getting new models every year or two, but consoles have always been something that comes around once every 7 years or so. I grew up with that, and that’s the cycle I know and love, but it’s not going to work forever.

Apparently Sony agrees because a recent interview between Oddworld creator Lorne Lanning and Game Informer revealed that Lorne spoke with Shuhei Yoshida, President of Sony Worldwide Studios, back in 2015. During this conversation, Shuhei referred to the PS5 as an “if” suggesting Sony was unsure if that was going to be their strategy going forward.

Lorne’s interpretation was that Sony was looking to be more agile:

“It was really interesting thing, he really didn’t give me a clear answer. He’s hinting at ‘we need to be more agile, none of us know what the future really looks like, so how do we adapt to it faster?’ To me that’s the way he was sort of thinking about it, which I think is the right way to think about it.”

While Microsoft has said they aren’t interested in an Xbox 1.5, Microsoft’s President, Phil Spencer has also spoke of a future where consoles could be upgraded mid-cycle. At the end of the day, something like PS4.5 was always going to happen, it was just a matter of when.

Here’s the thing though: every PlayStation console has released some sort of “slim” version, so what makes this rumor so pervasive? It’s the noticeable hardware upgrades, and the uncertainty as to how this console will affect current users.

With other technology and entertainment industries taking an approach of shorter cycles, the PS4.5 could give the console industry the courage and push it needs to adapt and evolve.

Ready or not, the console generation is an outdated concept that is going to change to keep pace with growing technology. PS4.5 or PS4K or “Neo” as the code name suggests, could be the first bold step into a future where we upgrade consoles far more consistently than we have in the past. What do you think? Ignoring cost would you get one? Does the console industry need a PS4.5? Let us know in the comments!