One of the biggest fears that people have when they first try PlayStation VR, is motion sickness. Games that inherently require a lot of movement tend to warrant hesitation from potential players as a result. When I first heard about Radial-G: Racing Revolved, I wondered if it would put my steel stomach to the test.

Even if it did, the concept of a futuristic racer in VR was too good to pass up. Now that I’ve spun around and seen what the game has to offer, it’s time to find out if this is a roller coaster thrill ride, or if it flies right off the track.

The concept of Radial-G: Racing Revolved, is a futuristic racer in the vein of classic zero-gravity racers we all know and love. The difference here is that the game can be played in VR while you sit inside of the cockpit.

The tracks consist of large tubes and some half-pipes that are riddled with boosts, traps, and plenty of moments where you can fly right off the track if you’re not careful. You steer by rotating your ship around the surface of the tube, or back and forth if you’re in a half-pipe portion of the track.

Radial-G: Racing Revolved doesn’t offer any premise or story behind its far-flung future racing. It focuses on getting you into the game and on the track more than anything else. The career mode will take you through 18 events, and then you will have access to multiplayer and several other types of modes.

While things like the combat mode are interesting, they take away from the game’s best quality, which is the high-speed racing. Speaking of high speeds, when you’re selecting a ship and track, the game also provides a comfort level for each so you know what to try based on your current VR tolerability.

Even with the modes and career mode, the game feels somewhat light on content. I would have liked to see more for the price point here. In addition, the multiplayer doesn’t have a lot of activity, so that mode is difficult to enjoy.

It’s nice to see a decent number of tracks and modes, but Radial-G: Racing Revolved doesn’t do a lot to make the experience compelling outside of the races. The menus and ships don’t have a lot of defining features of excitement. It’s all designed to focus on the racing itself.

Let’s find out how things feel when you’re in the cockpit of your very own ship.

Intense Racing in VR With a Few Flaws 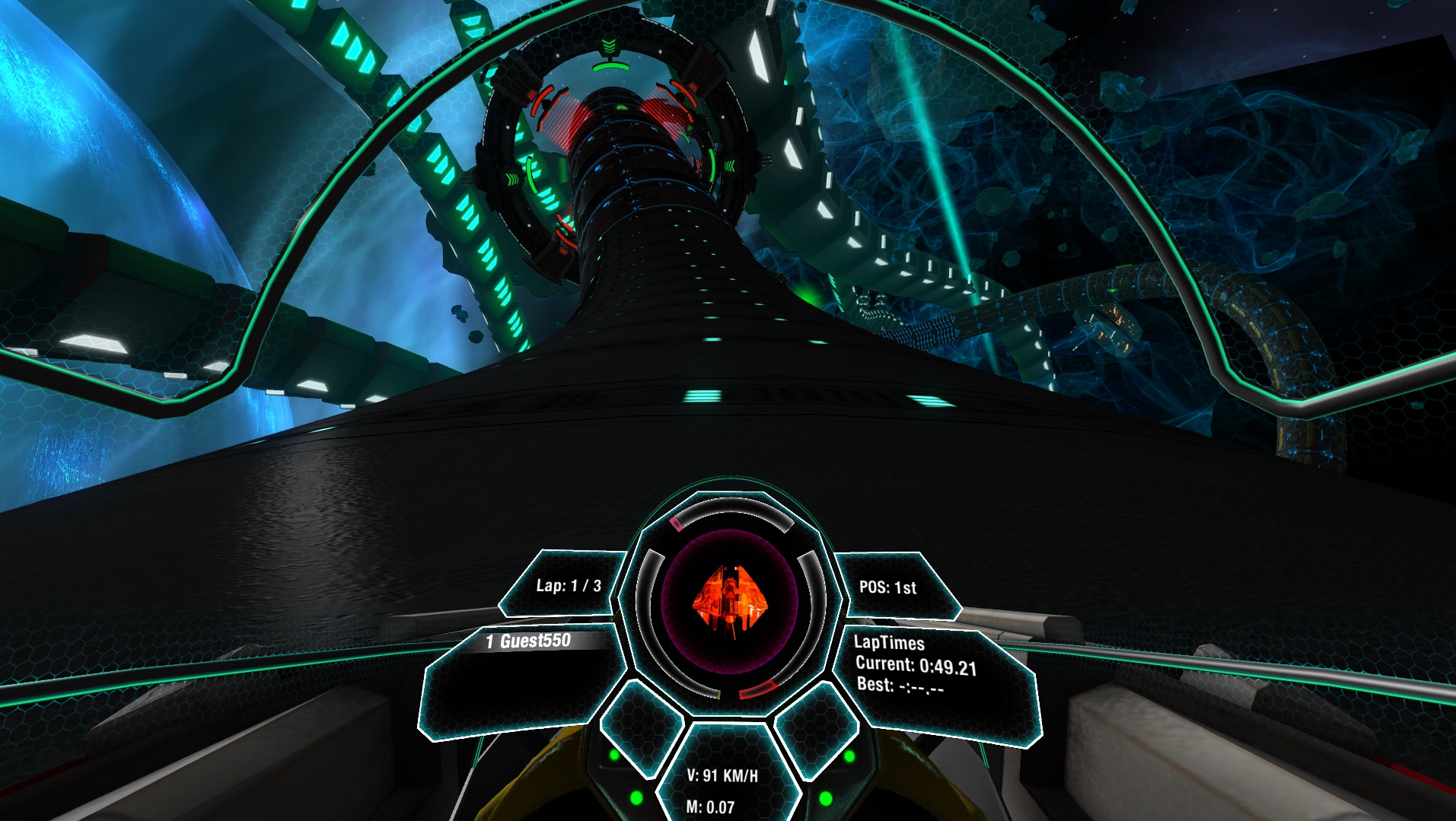 Once you get into your ship in VR, the first impression is very strong. You’ll have a full view of your body and the cockpit around you in fine detail. Once you punch the gas, the world comes at you fast and furious. Trying one of the more advanced tracks, I found my heart pounding and my face sweating beneath the headset in mere minutes.

It was a sensory explosion at first. I tried to aim for green boosts and jumps while avoiding the red gates that would slow my ship to a crawl. What I found to be the most difficult, were the transitions from the tube track to a half-pipe. There seemed to be an electrical current running through the air that you were expected to dodge or risk a respawn.

Unfortunately, going at high speed, the ships in Radial-G: Racing Revolved, don’t offer the snappy controls or handling needed to make these kinds of quick judgments. As a result, many of the jumps ended badly for me and hurt the flow of the racing as a result.

There’s no denying that rush you feel when you’re flying through the tracks, but hiccups like this can really hurt the overall experience. I will say that, even on the most intense levels, the game did a good job of keeping motion sickness at bay.

In addition to the high speeds, I also enjoyed the track design as it was pretty unique. The tube-based design made for sprawling levels that had a great sense of scale in VR. Watching obstacles and jumps coming at you from the cockpit of the ship was always exhilarating and immersive.

It’s just a shame that the tracks have some downfalls. The content that you get is also easy to experience in a short amount of time, and without equally compelling modes across the board, or an active multiplayer community, I have to question the game’s legs in the long term.

Even so, anyone who wants a futuristic racer on PlayStation VR can find a lot to like here, even if the content is a little on the thin side. 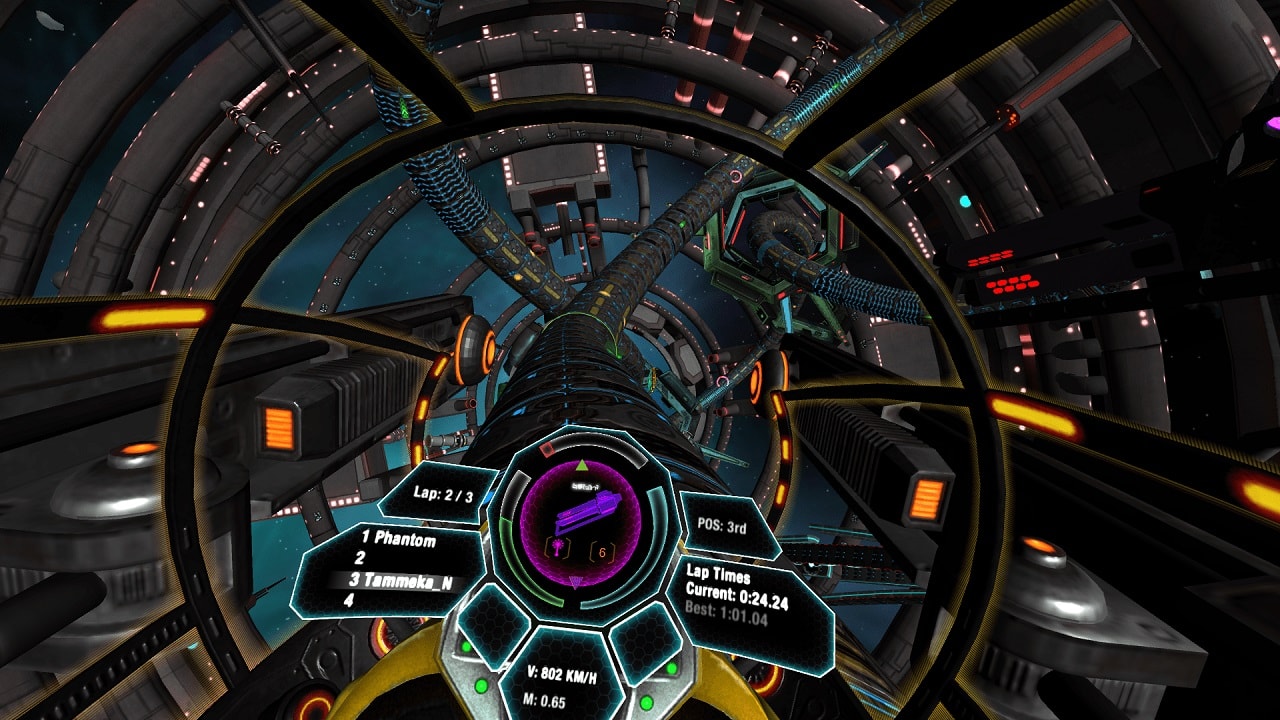 Radial-G: Racing Revolved is a sharp looking game both inside and outside of VR. When you’re inside the headset, the cockpit and tracks look crisp and smooth with little to no aliasing. The tradeoff here is that everything lacks a significant amount of detail. The tracks use several different colors to designate various gates and hazards, but otherwise, the general aesthetic is the same.

In the end, Radial-G: Racing Revolved is a racing game with solid foundations and some cool tracks, but it doesn’t offer a ton of depth or content to keep you coming back again and again. The lack of a multiplayer community also hampers its ability to hold long-term value.

I would recommend it for those who are looking for a futuristic racing game, but perhaps not at full price. On a sale, this could be a fun excursion into fast-paced VR racing. It doesn’t completely rewrite this sub-genre of racing, but it is a good start.

A copy of Radial-G: Racing Revolved was provided to PS4 Experts for review purposes