As more and more studios become comfortable with self-publishing their titles, we gamers are seeing exciting and unique projects come to life. Ninja Theory found success with their self-published Hellblade: Senua’s Sacrifice, and now the talented studio MercySteam has released their self-published title called Raiders of the Broken Planet.

This new 4-vs-1 shooter has an interesting model with a low price of entry. The real question is, does it have a great concept behind it, or is this game just as broken as the planet it’s named after?

Raiders of the Broken Planet takes place on the titular world which is located 25 light years from Earth. It is the only planet in the universe that generates a powerful energy called Aleph. The properties of this energy are numerous, and its value is unquestioned.

Like anything this powerful, there are plenty of people who want to get their hands on it. While the local indigenous people of the Broken Planet use Aleph for peace and protection, human invaders have come to harvest it for more nefarious purposes.

You will play as your choice of Raider and set out to gather more allies and push back these unwanted invaders. Each of the unique characters has their own personality and reason for fighting. For some, it is revenge against those who have come to take their home. For other, it’s a lust for bloodshed and combat.

Whatever the reason, their personalities mesh like oil and water, resulting in constant heated discussions and arguments during cutscenes. There’s no denying that these characters are unique, and I really enjoyed the high-quality cutscenes. The constant bickering can be bothersome after a while, but the humor is spot-on.

Currently, you can download and play the prologue of the game absolutely free. In fact, these opening missions (one is a tutorial), will always be free, so there’s no cost to start playing. Once you’ve finished the prologue, you can purchase the first campaign, Alien Myths, which consists of four new missions.

Several more campaigns are planned during the game’s first season on content. Each campaign only costs $10, so it’s really reasonable to jump in and start playing if you like what the free prologue offers.

The story in the prologue and the first campaign is engaging and interesting for sure, but it focuses more on the characters than the overarching story. Venturing to the game’s website or menus shows that there’s a lot of lore behind this world, so I’m hoping we’ll see more development of the game’s larger plot in subsequent campaign releases.

While the story isn’t as in-depth as I would have liked, given the interesting premise, I still enjoyed what story we’ve gotten thus far, and I’m very interested to see how these characters develop and grow into the next several campaigns. 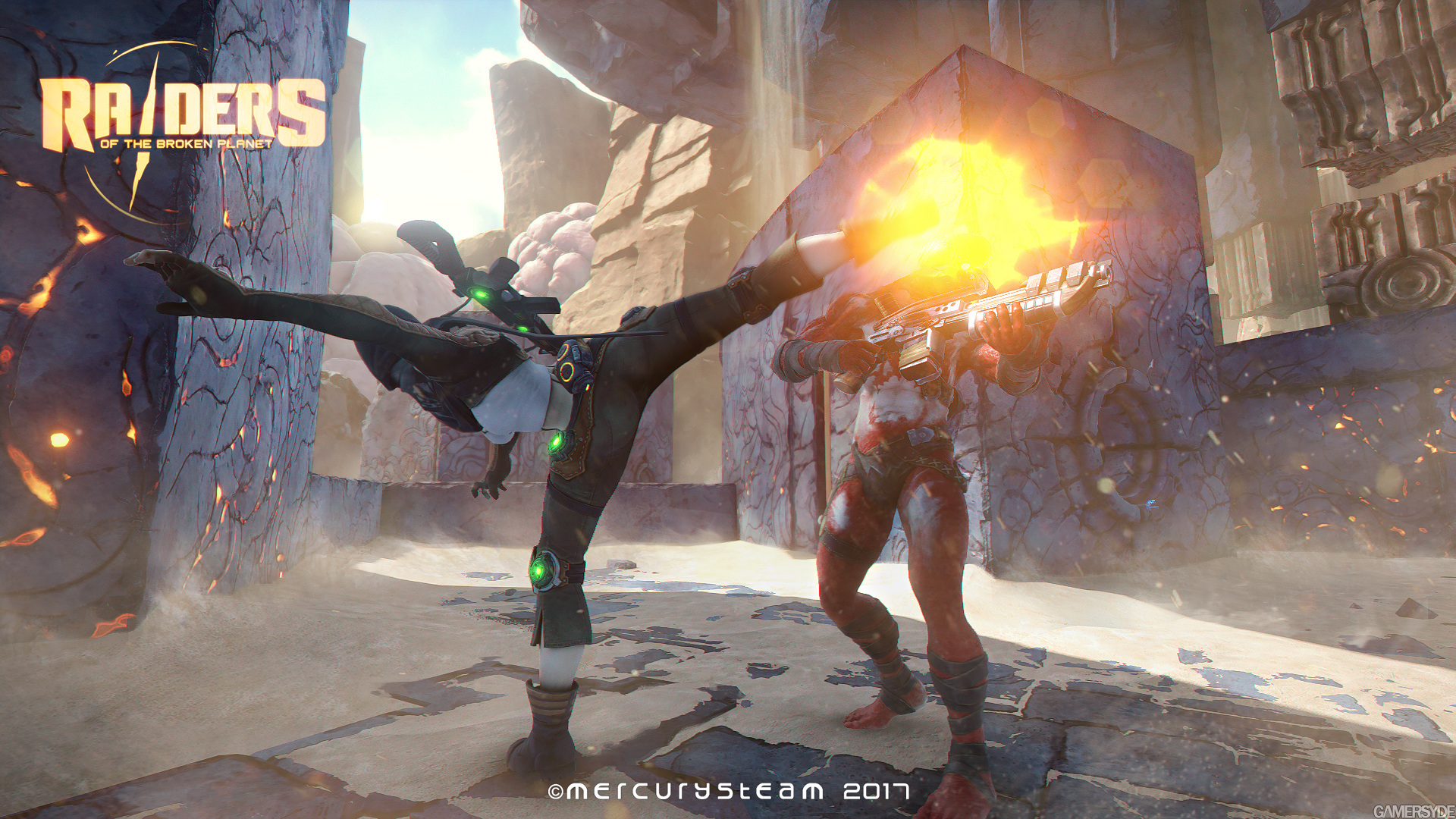 Raiders of the Broken Planet may look like a standard third-person shooter, but don’t let the looks fool you, there’s a lot going on under the hood. For starters, each of the game’s characters has their own unique play style to match their personalities. Harec, for example, is a sniper who works best in stealth at at range.

Constantin, on the other hand, can bring the heat with his chain gun and deployable shield ability that pushes enemies back. The game is best placed online with up to four people, but this also opens up the possibility for another player called the Antagonist to join in.

As you’re doing all of this, you’ll be faced with several different types of objectives that range from defending a point, to taking down specific enemies, to escorts, or even boss fights. While you’re fighting, you’ll need to manage your Aleph levels. The more you run around and build adrenaline, the more visible you become to enemies as your Aleph levels turn you into a giant target.

Limited ammo also means you’ll need to replenish your supply, which can only be done by getting a melee kill. Close quarters combat in Raiders of the Broken Planet is about more than just getting a few hits in. You’ll need to decide between a punch or a grapple, while also incorporating your dodge button. There’s a rock/paper/scissors level of strategy to this, because one type will negate another.

It’s a tad clunky in practice, only because there’s a slight delay between your button press and the animation as the game decides whether it worked or not. More often than not, I found myself mashing whichever button came first because I was desperate and surrounded. Even so, it added more tension to these encounters than a simple melee attack would.

I like all of the mechanics when they are put into action, but the game only truly shines when you have a full team at your disposal. You can play the game solo, but the difficulty erratically spikes, and certain characters really don’t work well for solo play, as the game will warn you.

The Antagonist, while a cool concept, can also seem a bit overpowered. In one mission, our team was consistently wiped out by this rogue character, to the point where we couldn’t finish the mission. While I realize that this is the goal of the Antagonist, I felt like there should have been a few more checks and balances in place, as the Antagonist does have the entire enemy force working with them.

Standard enemies can also take a pretty heavy beating before they go down, and bosses will always have multiple health meters to knock out before they go down for good. Some of these design choices seem like artificial ways of increasing the difficulty, and it makes the solo play tedious at times as a result.

While trying out the game’s multiplayer, I was able to find a few matches pretty quickly at launch, but since then I’ve had trouble getting into any games without spending 10+ minutes in the matchmaking. This is especially true when trying to play one of the paid missions in the first campaign, Alien Myths.

Progression does occur as you accumulate currency from completing missions, so there is incentive to replay missions and try different characters. Overall, the mesh of gameplay styles works pretty well, but like the characters themselves, it can clash at times and doesn’t shine as brightly when playing solo.

The presentation in Raiders of the Broken Planet is very polished and clean. It has the aura of a AAA title that one would expect from an experienced developer like MercurySteam. Character models are expressive and voice acting is strong for each of them. While the humor may not land for everyone, I enjoyed it.

Cutscenes have solid direction and camera work, along with some slick action scenes. While they focus mostly on character interaction, the tight zooms on their faces and hard cuts make them fun to watch.

Raiders of the Broken Planet is an interesting beast. Since the prologue is free, I think everyone should check it out to see if they like its mix of objective-based missions, 4-vs-1 gameplay, and unique characters.

For the low price of the first campaign, there’s a good amount of content to be found here. It’s not quite as fun by yourself, so the strength of the matchmaking needs to improve for the game to reach its full potential. As it stands, the Broken Planet is a place I recommend visiting even if you just stay for the prologue.