There has been a healthy increase in games that have destructible environments since the dawn of the PS4 generation, but in prior generations of consoles, this feature was far less prevalent. One game that has always stood out for me in this regard was Red Faction Guerilla. It had an amazing destruction system for the time that still rivals many of today’s games that feature it.

Now we have Red Faction Guerilla: Re-Mars-tered, a remastered version of the game at a budget-friendly price. Does this return to the red planet, complete with a punny title, preserve everything that made the original so much fun? Let’s find out.

Red Faction Guerilla: Re-Mars-tered is a faithful recreation of the original title that came out on PS3 and Xbox 360. If you haven’t played it before, this game was originally a continuation of the classic Red Faction series from the PS2 era, which was also known for destructible environments, though not on this scale.

Developer Kaiko was responsible for this remaster, which takes the classic title and gives it a fresh chance to be appreciated. I played the original release, but I am guilty like many others, of letting it fall to the wayside back then due to its original release near GTA IV.

Despite having a relatively simple open world and a decent storyline, Red Faction Guerilla never really go the appreciation it deserved for the absolutely fantastic system in place for environmental destruction.

This was a game where you could level anything. Tear apart the walls, rip open the floors, and bring it all crashing down by shattering the foundation. It was detailed, it was realistic, and most of all, it was fun.

I’m pleased to report that everything you remembered or wanted from this game is still here and in fine form. Some post-launch patches have cleared up bugs and stability issues, none of which were really an issue for me during my playtime. Red Faction: Re-Mars-tered has you playing as the member of a resistance seeking to overthrow the Earth Defense Force; a tyrannical government that has enslaved the people of Mars.

The storyline is good, but it does tend to follow the tropes of the resistance fighter archetype, so don’t expect anything that’s going to revolutionize the genre. That being said, the gameplay does a nice job of helping you feel the progress your making in both the hearts and minds of the people.

Each district of Mars has a meter of influence that you’ll need to drain by destroying enemy structures, completing mainline missions, and participating in option side objectives and activities. As you make progress, you’ll also fill a resistance meter that encourages others to come and fight alongside you.

Death will knock that resistance morale meter down a smidge, so it’s important to keep your people happy, or you’ll find yourself quickly overwhelmed in combat encounters. This combination of meters and mechanics does a great job of showing you where you stand and what progress you’ve made, which I really enjoyed.

A simple upgrade system allows you to spend salvage you earn from destroying structures and completing objectives. Weapon lockers and crates also give you the chance to refill your ammo and explosive charges.

The detail and realistic nature of the destruction system are, of course, the star of the show here. Whether you’re using explosives or your trusty sledgehammer, anything in the game can be reduced to rubble with enough firepower.

It’s not perfect as some structures will remain standing even when they’re supported by almost nothing, but for the most part, it still rivals many of the other systems in place on current generation titles.

The gunplay and driving are both fine, but they don’t do anything interesting or unique. Furthermore, the cover system can be finicky during gunfights. A lack of fast travel also hurts when you need to drive across a section of the map just to get back to one of your bases, which are quite spread out. In many cases, mission markers also don’t reflect the actual location of the mission. Instead, you’ll receive your briefing and then go to the actual location.

Without much going on in the open world beyond other drivers and enemy encounters, it can be boring having to drive long distances through the relatively empty environments. That being said, when the action gets going, Red Faction Guerilla: Re-Mars-tered is a fun and explosive romp that fans of the genre will absolutely enjoy.

A Fresh Coat of Red Paint 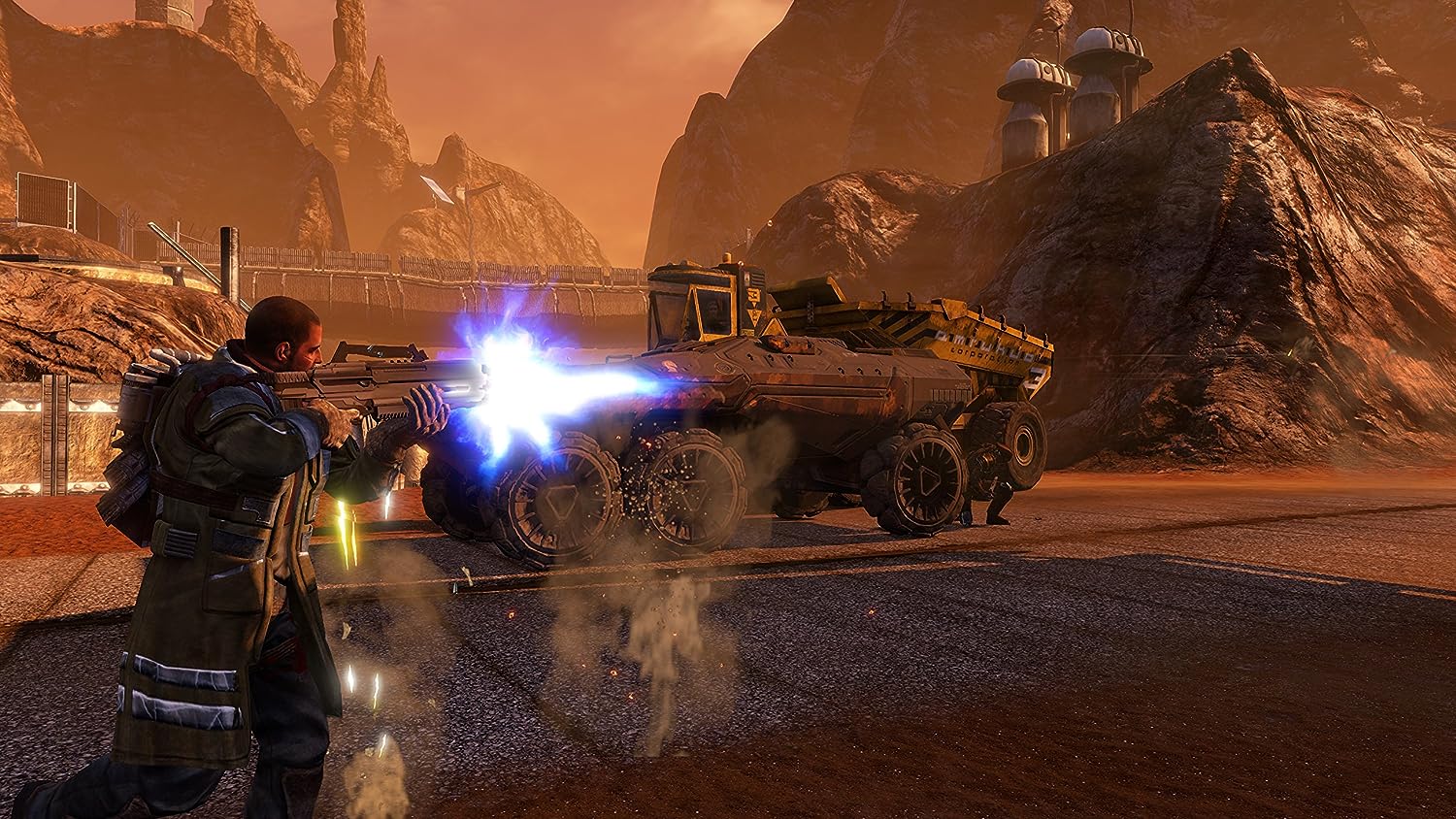 Red Faction Guerilla: Re-Mars-tered is a solid look game, and it looks a lot better than the original release. That being said, it’s not the most impressive remastered I’ve ever seen. Textures, lighting, and shadows are all vastly improved but lack the detail of modern open-world games.

The frame rate for me on PS4 Pro was solid for the most part, with very few drops in heavy action moments. Were this a full price remaster, I would be disappointed, but given the budget-friendly price, I don’t imagine the graphics will bother you too much.

Keep in mind too that the destruction is still extremely detailed, even by modern standards, so again, this is where the game shines brightest. Frankly, if you haven’t played Red Faction Guerilla, and you love open world destruction, this one is a no-brainer. It’s time to join the resistance.

A copy of Red Faction Guerilla: Re-Mars-tered was provided to PS4 Experts for review purposes