If there’s one thing I’ve learned over the years, it’s to never judge a game based on its premise. Truly unique experiences are found within the most mundane of concepts. Case and point: Return of the Obra Dinn is billed as a “An Insurance Adventure with Minimal Colour.” Nothing terribly exciting about insurance where I’m from, but don’t write it off just yet.

In this puzzle game, you must piece together what happened aboard the good ship Obra Dinn. It disappeared five years ago, and now it’s suddenly back. The mystery is certainly compelling, but should file a claim to purchase this game, or is your coverage in this case out of network? Puns, as always, are entirely intended. Time to find out!

An Insurance Investigator’s Life For Me

Return of the Obra Dinn places you in the shoes of an insurance investigator for the East India Company’s London Office. You are sent to Falmouth to board and ultimately ascertain the fate of the Obra Dinn, a ship that went missing five years ago in 1802.

With a crew of 60 people, and over 200 tons of trade goods originally on the ship when it departed, you can imagine how the insurance company has a hard time believing that everything and everyone simply vanished.

All of this is conveyed to you via some documents before you arrive at the ship. Shortly after you board, you’re given a pocket watch that possesses the power to show you someone’s final moments. It’s not immediately explained why this is possible, but it is crucial to your investigation.

From a story perspective, Return of the Obra Dinn is a complex web of interlocking events. So much so that it continues to blow my proverbial mind when I remind myself that this was made by a single person. Lucas Pope, developer of titles like Papers, Please, is a master at taking something simple and making it incredibly compelling.

At a surface level, the story is simply something you view through the final moments of each body you encounter. Of course, the game quickly becomes so much more than that. As an insurance investigator, your job is to figure out what happened to each and every member of the crew. That means starting with absolutely nothing and putting the pieces together yourself using an in-game book.

Each time you finish viewing a scene, the game automatically creates an entry for it within the appropriate chapter of your book. This is where you will make decisions like the name of the person in question, how they died, and other details that I won’t mention here for the sake of avoiding spoilers.

These pages also give you information like where the body was discovered and what other crew members were presented for the event (either because they were witnesses, or because they happened to be in the area).

For a majority of the time, you will make these decisions without any input from the game. Small things, like a clear character portrait, will indicate if you possess the information needed to identify someone, but otherwise you must make your decision and move on. With so little to go on, you would be forgiven for thinking the game is a little too hands-off, but there is one element to help you out.

Any time you correctly complete three fates correctly, the game stops to permanently mark them in the book, thus giving you the green light on those three. This creates a good balance between uncertainty, and some kind of feedback that you’re heading in the right direction.

Things start simple, with clear clues in the minimal dialogue for each scene, but as you go on, the devil truly becomes apparent in the details. Again, I will remain vague for the sake of avoiding spoilers, but you’ll need to flex your gray matter if you want any hope of seeing the game through to its conclusion.

Speaking of conclusions, you’ll need to spend a lot of time to see the game’s best ending. A basic (but incomplete) playthrough only takes a few hours, but you’ll spend anywhere from six to ten, twenty, or even forty hours trying to solve every single mystery the game has to offer.

This may sound daunting, and that’s because it is, but Return of the Obra Dinn doesn’t put a lot of pressure on you to make progress. It’s not willing to help, mind you, but you also won’t be penalized for watching events five, ten, or twenty times as you seek just one more clue.

There are some truly difficult obstacles between you and the answers you seek, but if there’s one thing Return of the Obra Dinn does extremely well, it instills a voracious need within you to seek out the answers to your burning questions.

This is a combination of the short, intriguing nature of the scenes you uncover, and the overarching story as a whole, which plays out in a non-linear fashion, often jumping between entire chapters as you explore. There are absolutely going to be people who decide this game is too difficult for them. I certainly hit a brick wall on numerous occasions.

While part of me did wish for some sort of vague hint system in those moments, I appreciate that Return of the Obra Dinn stuck to its guns and that creator Lucas Pope insisted within the game’s core design that you, the player, must figure this out for yourself.

A Bold Style, and a Double-Edged Sword 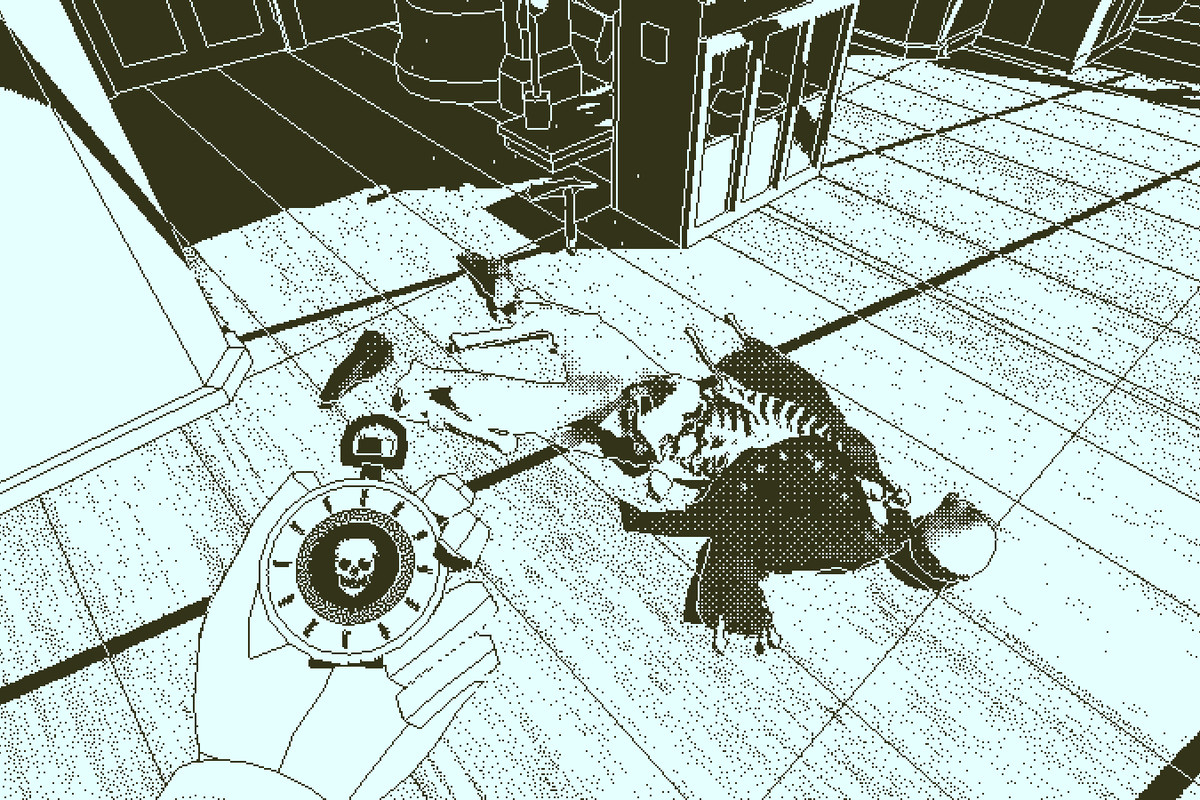 Perhaps the most contentious element in Return of the Obra Dinn is the art style. The game is rendered in 1-bit color with dithering to simulate shades of gray. This gives it that stylized black and white look that you see in screenshots and trailers, but it comes at a price. The game can become difficult to focus on after extended play periods.

In my case, my Player 2, A.K.A Christina, (who is now my fiancé as of last week!) experienced headaches after extended play. There are settings in the game that let you choose from various styles that emulate different monitor types, and alternate output options like “smooth” and “sharp” to give the game a less visually taxing look.

Ultimately, its a style that gives the game a unique identity, and while the visuals can be too much at times, they do make for some truly breathtaking (and horrifying) setpieces that wouldn’t have the same effect in any other style.

I particularly loved how music was used in the game as well. There’s a specific set of notes that plays every time you dive into a memory, along with a unique riff that plays during tutorial messages. The use of music to accentuate specific events works extremely well here. The way music fades in during the memories themselves also brings otherwise still scenes to life in a great way.

Return of the Obra Dinn is a fascinating puzzle game that received high praise when it was released on PC. Having now played it on PS4, I agree that it deserves every bit of that positivity, especially considering it was developed by Lucas Pope himself.

Its intense difficulty and insistence on leaving a majority of deductions up to the player may be too much for casual puzzle gamers, but for those who are ready to invest the time and mental energy into its world, Return of the Obra is a game that, much like its ship, you’ll come back to time and time again.

A copy of Return of the Obra Dinn was provided to PS4 Experts for review purposes.