Much like Hollywood these days, gaming is seeing a lot of remakes and sequels for major franchises. It’s not very often that a little-known franchise makes a return in a remaster. Usually, it’s something that has mainstream appeal. It’s for this reason that I was pleasantly surprised when I saw that Rogue Trooper Redux was coming to the PS4.

The original game, a title on the PS2, was one of those games I always wanted to try. Now that Rogue Trooper Redux has found its way to the PS4, does this game shine as a remaster or are these ideas too outdated when compared to modern shooters?

The story of Rogue Trooper Redux is inspired by the original comic book, which gives the game a unique premise and sci-fi feel. Set on the planet of Nu-Earth, the game focuses on a seemingly unending war on the planet between the Norts and the Southers.

The planet itself has become a toxic wasteland after countless biological and chemical weapons have ravaged the atmosphere. The Norts had resorted to wearing protective suits to survive out on the surface, but the Southers have a secret weapon.

They have been working on Genetic Infantry (G.I.), which are soldiers that have been designed to survive the deadly atmosphere. You play as one of these soldiers, named Rogue. During the game’s opening moments, your initial drop onto Nu-Earth doesn’t go so well, and soon you find yourself the last surviving G.I in your squad.

Not to fear! Genetic Infantry in Rogue Trooper are equipped with biochips that store their consciousness upon death, thus allowing them to be transferred into a new clone body. A rather haunting quote in the game states that genetic infantry cannot escape war, even in death.

Without any way to get back to command, Rogue places the biochips of his comrades into various pieces of gear on his body, to prevent them from dying permanently. This clever twist during the game’s opening mission allows you to journey with your squad, despite being the last living G.I.

Together with Helm, Gunnar, and Bagman, you’ll journey through enemy bases, scarred war zones, and sprawling environments. Having his squad with him, almost literally in spirit, allows the game to keep its lone wolf premise while still having the banter from a squad of soldiers.

Beyond the immediate story, the game also allows you to unlock all kinds of lore and backstory. These entries have multiple pages to go through, offering a lot of depth to the history of Nu-Earth, the origin of the G.I program, and plenty more.

In a modern age where shooters typically have familiar feeling settings and stories, Rogue Trooper Redux reminds us that there are still plenty of original sci-fi concepts left to explore, whether they be from past games or inspired by source material like comic books. Despite being two generations old, Rogue Trooper Redux shows that this cover-based shooter was ahead of its time when it released on the original Xbox and PS2. While much of the gameplay has been left the same, the cover system has been tweaked slightly from the original.

You will immediately notice some interesting design choices, such as the lack of a sprint ability, but all of these things were accounted for in the level design. The levels themselves are mostly linear, but they do offer a few different ways to tackle your objective how you see fit.

Each of your squad members offers a benefit to your arsenal. Bagman is especially useful, as he can fabricate medkits, ammo, and new weapons on the fly as you collect and spend salvage you find on the battlefield. A smart balance between regenerating health and the use of medkits offers the best of both worlds in terms of health mechanics.

Every enemy you take out can be looted for salvage, which you’ll use to fund your crafting of essential materials and upgrades. The weapons you have at your disposal are varied enough to encourage multiple styles of play as well. The rifle you have can be used in traditional automatic fire, or converted to a sniper with a scope in seconds.

Switching to other weapons isn’t as fast as you would expect, and can cause some serious problems when you’re in the heat of battle. Rogue will put away the weapon he’s holding and then pull out the other one in a methodical fashion, which may induce screaming at the screen for him to hurry up.

Movement and taking cover feels fine, if a little clunky at times. Without the ability to sprint, you’ll need to plan your movements carefully to move from cover-to-cover. You’ll have some abilities to use as well, such as the ability to project a hologram of yourself that can distract enemies while you sneak forward, but I rarely used them in my experience.

Even so, the options at your disposal in Rogue Trooper Redux illustrate the game’s focus on strategy and resource management. Ammo and medkits are not unlimited and are dependent on your ability to take out enemies quickly and efficiently so you can build your supply of salvage.

It has an almost survival feel to it, which lends credence to the lone wolf concept. You truly feel like you’re on your own, left to fight against overwhelming odds in the search for truth and justice. Yes, you may be a super soldier, but your supplies are limited, and mistakes can cost you dearly in the long-run as you’ll need to spend precious salvage to keep yourself afloat.

With no reinforcements coming, you have only yourself to depend on. While the moment-to-moment gameplay is fun, there are times when the levels tend to drag on, and a lack of enemy variety allows repetition to set in.

On-rails shooting segments should add spice to the pacing, but their sluggish controls tend to make them more of an annoyance than anything.

It’s worth mentioning that Rogue Trooper Redux also includes a suite of multiplayer options, but despite multiple attempts, I wasn’t able to get into a game. Unfortunately, it doesn’t seem like the community here is very large or consistent from a multiplayer perspective.

In some ways, the game shows its age in terms of controls and limited level design. In other ways, though, Rogue Trooper Redux proves that it has ideas that stand the test of time, ideas that I would love to see in a modern sequel.

A Fresh Coat of Paint Gives This Presentation New Life 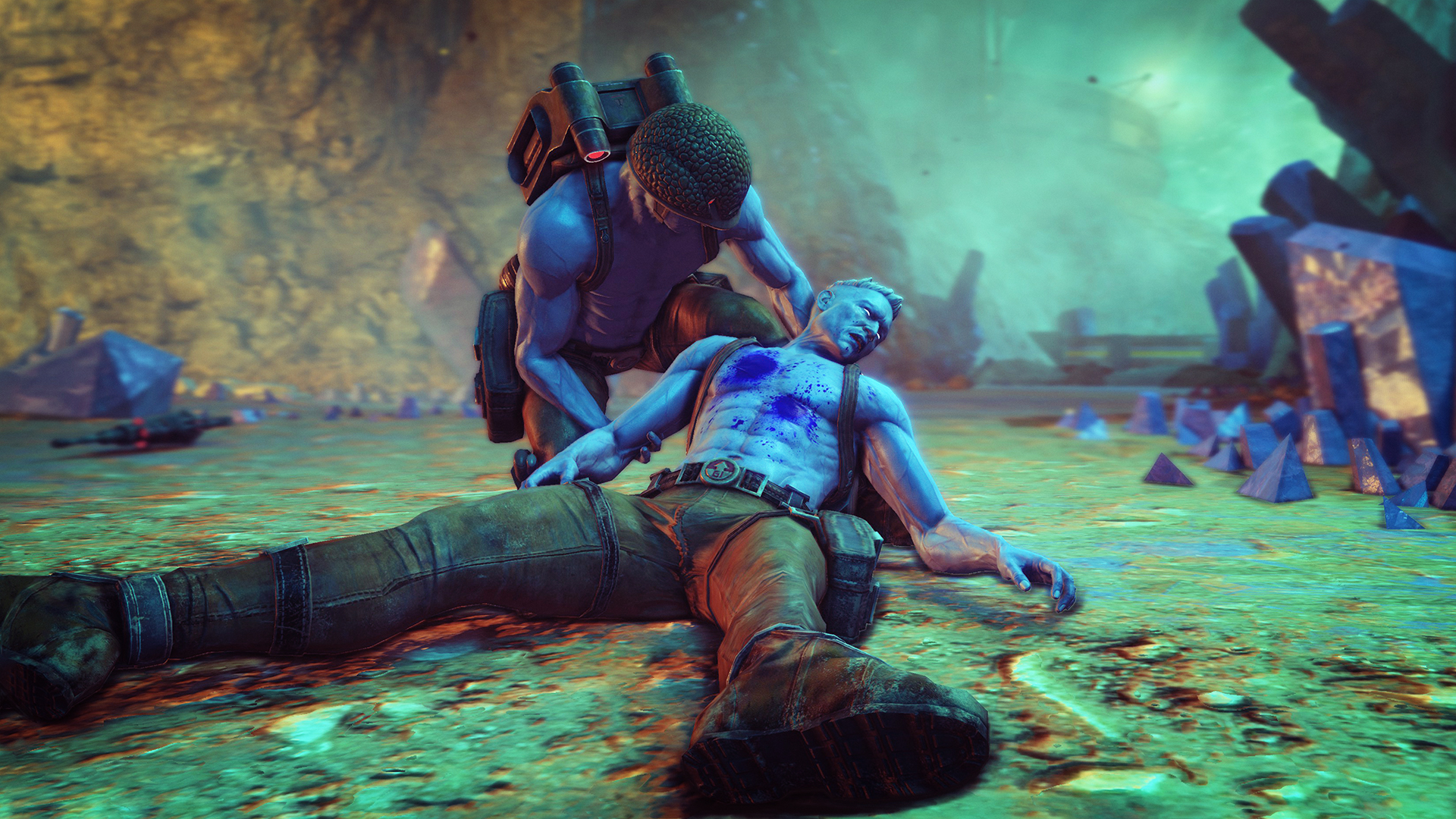 Rogue Trooper Redux is a remaster of a game that came out in May of 2006, but you wouldn’t know it when you’re looking at the 2017 edition. While cutscenes can still look a little dated, the gameplay itself has sharp textures and a smooth frame rate.

Animation, while not incredible, still holds up pretty well by today’s standards. The voice acting is good, with Rogue and his squad being the high points, but again, it’s not going to topple modern performances we’ve seen in AAA titles.

Having finally had the opportunity to play Rogue Trooper in this new Redux release, I have to say I’m very glad that I did. While it shows its age in some respects, in a lot of other ways it reveals some excellent game design that would be a welcome addition to 2017.

If you’re interested in the universe or a fresh take on the genre, give Rogue Trooper Redux a shot. While the multiplayer may not have legs, your support could provide the incentive needed to create a fully modern sequel. Given the quality of this remaster, that’s a cause I can get behind.