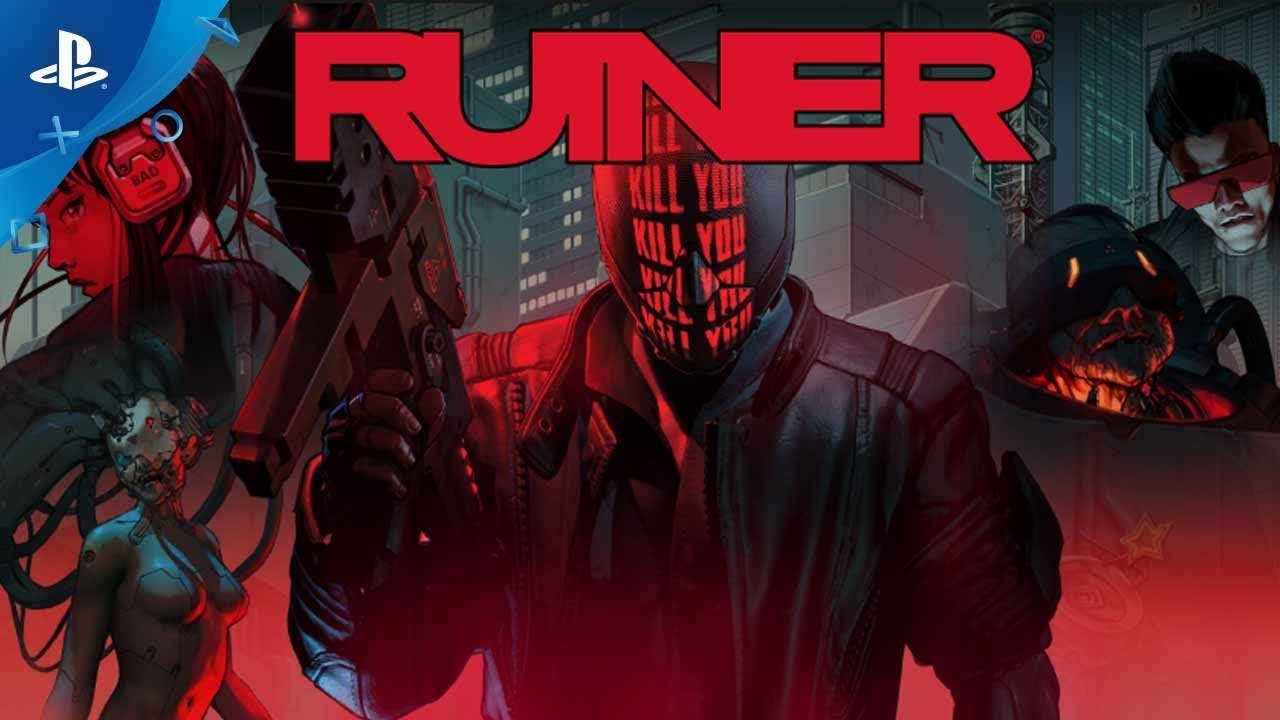 I'm a big fan of games that strike out into their own style and stick to it without any hesitation. If you're going to go for a brutal and gritty cyberpunk future with characters and designs that look like SUDA 51 and Tarantino finally teamed up to make a game, then you should own it!

RUINER does exactly that. This is an unapologetic and utterly visceral action shooter that knows exactly what it wants to do and does it with both style and substance. Does it strike out on a path worth treading, or does this game end up ruining itself in its relentless pursuit of revenge?

From the moment I booted up RUINER, I knew I was going to like this world. Set in the cyber metropolis of Rengkok, this cyberpunk shooter places you in the shoes of a man whose mind was hacked and his body used to carry out an assassination mission.

When you finally regain control of your own senses, you find out that the person or people behind your hacking also have your brother held captive. With a clear goal in mind, you strike out with the help of a hacker friend to shoot, smash, and otherwise eviscerate everything in your path.

The immediate story you get while playing is fast and loose, but there's a depth hidden in the game's menus. As the game is clearly meant to be a non-stop adrenaline rush, the developer hid most of the story in a lore tab that expounds upon the state of the world, the nature of your enemies, and the true stories behind corporations like HEAVEN.

As it stands, your time outside missions isn't very meaningful, and the bulk of the elements that make the game's world unique are hidden behind menus and tucked in blocks of text.

It's certainly better than the story not being there at all, but with such a unique world at my fingertips, I wished there was a more engaging way to experience it than reading the lore in the menu.

Furthermore, while the game opens with you being controlled and fighting back against that control, you're never really given any choices for yourself in how you approach situations. This could be attributed to blind rage, but there are also moments where you can choose your reaction in conversations.

These choices could have had some sort of impact, but instead, they just offer some flavor to the moments when they appear. I would love to see a sequel set in this world that lets the story breathe a little more because what we have here is very thought out and paints a grim and detailed picture of the future that left me wanting more.

Superb and Smooth Gameplay That Oozes With Style 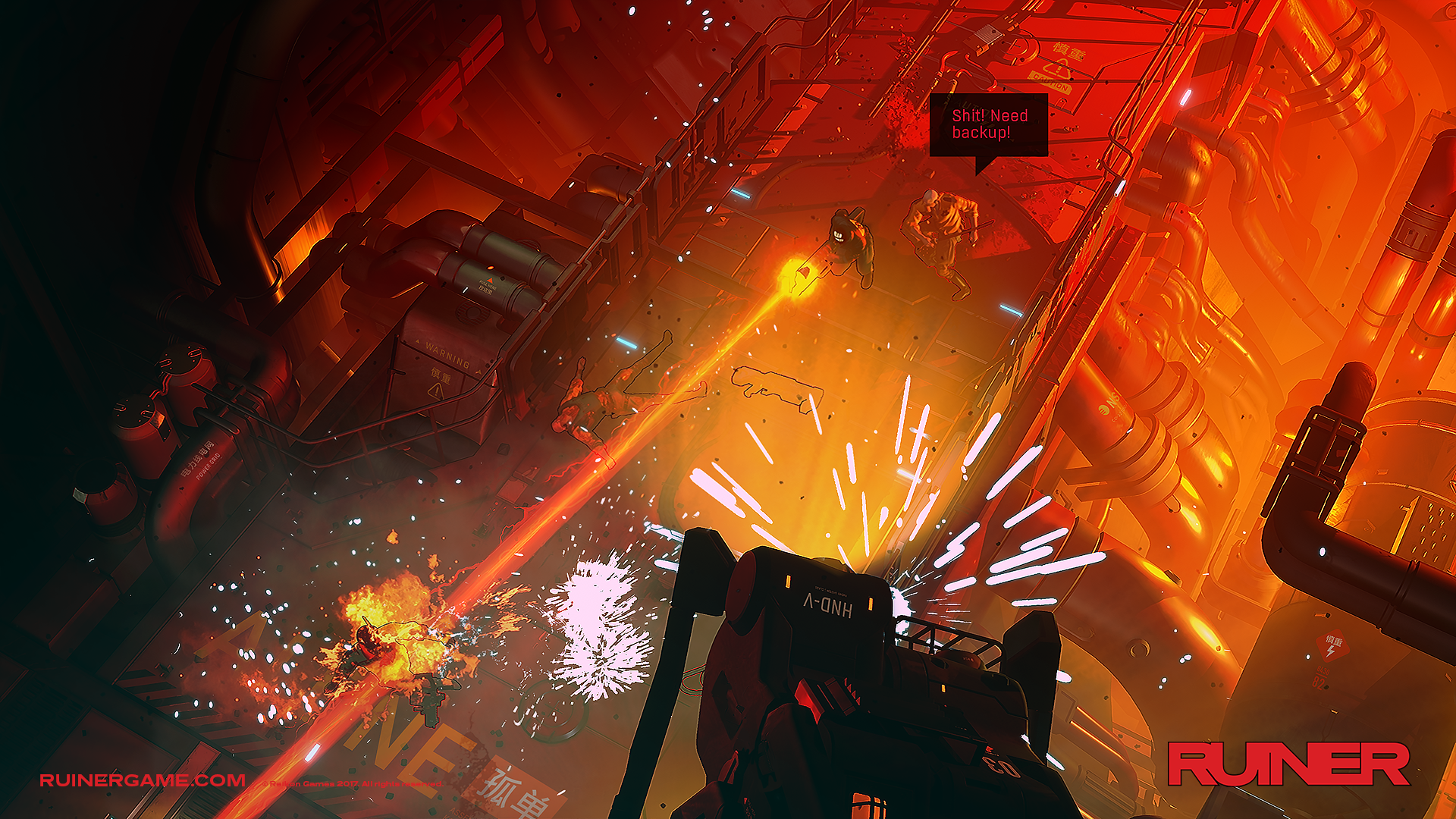 The gameplay in RUINER is absolutely cathartic. You move through environments with speed and precision. Functioning like a twin-stick shooter, you can dash across areas as enemies come from every direction.

Your melee weapon has a satisfying crunch as it impacts enemies, sending them flying across the screen. A wide variety of weapons you can pick up also offers plenty of ways to shoot, burn, or otherwise disintegrate the foes around you.

While the game could have easily ridden this wave of fast and visceral combat, the developers went several steps forward and incorporated a huge skill system that allows you to tailor your abilities on the fly.

While guns come and go, you'll gain unlock and upgrade abilities in an impressive skill tree. These skills can be equipped and switched on the fly as you need to adapt your strategy.

One skill will let you toss deadly grenades, while another will allow you to trigger a shield that blocks bullets. Even energy can be consumed to refill your health if you have the right ability equipped.

It's a good thing the game is this adaptable because it's not planning on holding your hand. There's been some divisiveness in the difficulty on offer here, but with multiple settings to choose from, I believe anyone can find that perfect setting to enjoy RUINER.

It's some of the most refined combat we've seen in an action shooter, and that gives RUINER a major edge over the competition. Tack on the adaptable and in-depth skill system, and you have one of the finest top-down isometric shooters PS4 currently offers. 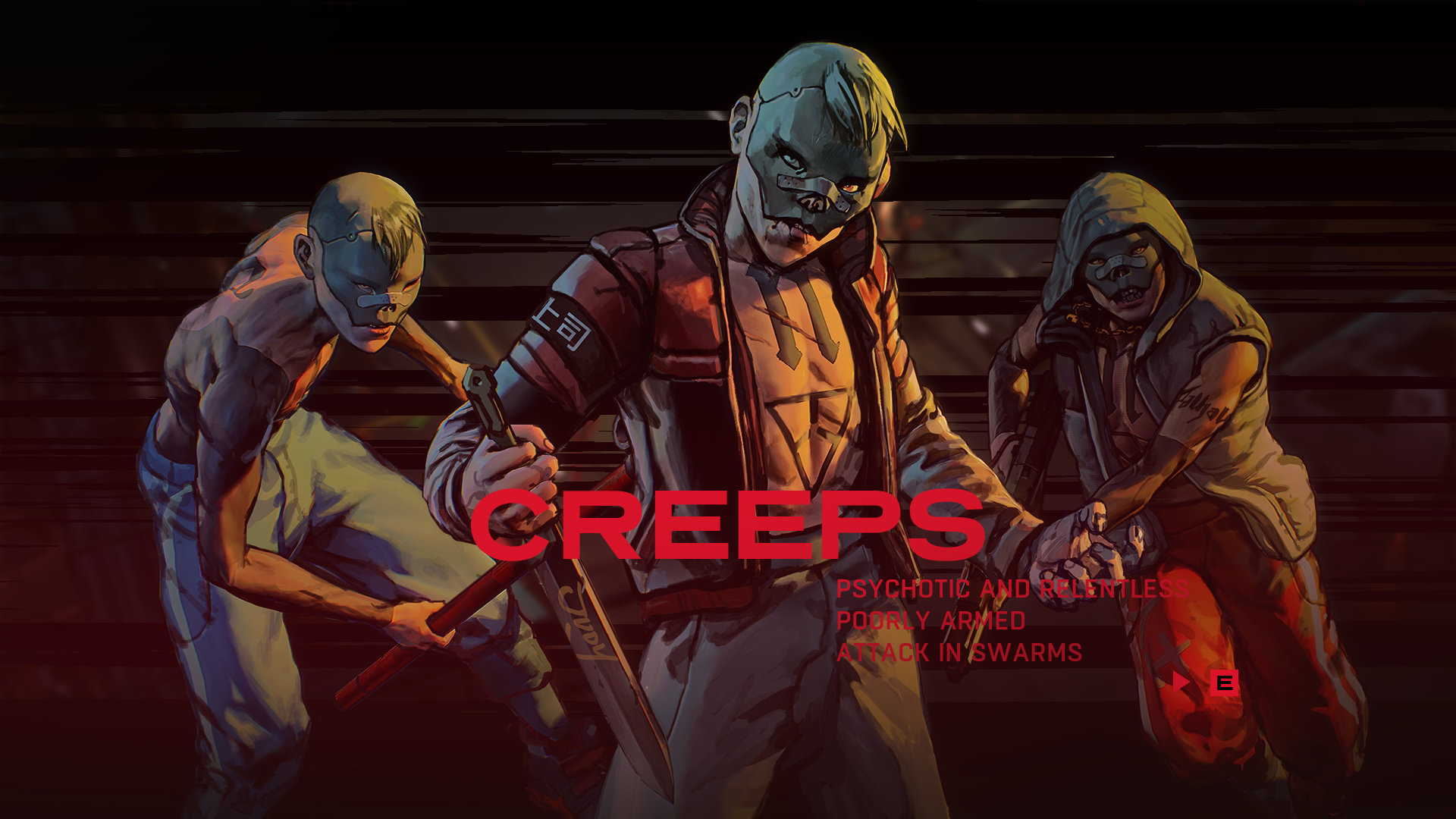 RUINER mixes an anime style with cyberpunk to great effect. I know I made a joke about SUDA 51 and Tarantino teaming up to make this game, but that's exactly how it feels.

From the oddball characters to the way your mask flashes with phrases and images, to the buckets of blood and gore, it's all unique and flashy in a good way.

Even little touches like the way your hacker companion rates your battles at the end of each room and cheers you on, all just add to the personality that RUINER has going for it.

Then we get to the soundtrack. A cyberpunk world like this deserves a soundtrack that hits the right notes for the gut-wrenching action, but also serves the personality and dark undertones.

I listened to the soundtrack for RUINER as I wrote this review, and even outside the game, it's still an excellent piece of music. It's not your typical soundtrack that incorporates orchestra, nor is it the classic sci-fi sounds you expect to hear.

Instead, the soundtrack takes a gritty approach to match the game's world. Static-filled beats mix with thunderous percussion while a soft woman's voice repeats the same phrase over and over again.

It's hypnotic, and it settles into a rhythm that matches the fast pace of the game itself. It's always great to see how composers can adapt their skills to complement the game, and with RUINER we have exactly that. One cannot exist without the other, and together it makes for an adrenaline-fueled auditory experience.

I don't think it would be a stretch to say that RUINER is one of the finest action shooters we've seen this generation. At the very least, it's solid core gameplay and the unique world it creates will be very hard to forget. With upwards of 10-hours of gameplay and reasons to go back for that high score, my only wish was that this world had delved deeper into its concepts.

Despite that qualm, I had an excellent time with RUINER. Don't worry, it's not going to ruin your wallet, just your free time.