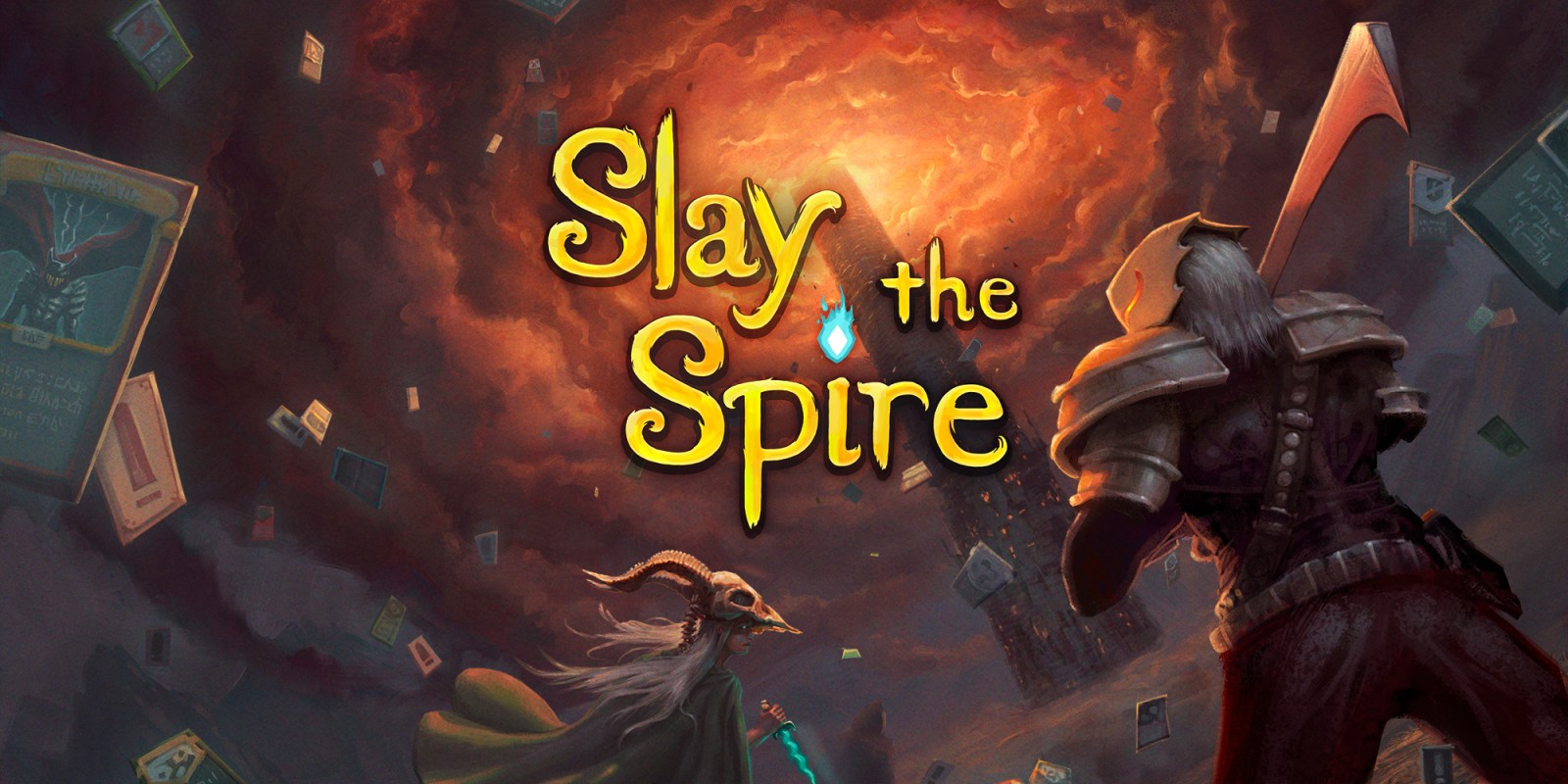 Roguelikes are a hard sell, especially when you tell people they’re not going to finish the game on the first try. These titles are all about changing up your approach. Learning new strategies, and taking away small victories from each run. Now, combine that with a cards which are usually built in decks by hand prior to an adventure.

Slay the Spire throws a lot of this out the window and instead brings its own unique flavor of dungeon crawling, roguelike elements, and card-based battling. To conquer this tower, you must forget everything you think you know and embrace a new standard. Is it worth the climb, or will you leave this spire unslayed? Let’s find out!

A Combination of Strategy, Smarts, and a Dash of Luck

For me, a good roguelike has to have a tight gameplay loop. I know I’m going to do ten, twenty, or two hundreds runs, so I need them to be fast, focused, and purposeful, or I’m going to lose interest after a while. Slay the Spire doesn’t seek to pull you in with a grand story or a mystery to solve (although I wouldn’t mind some background on the unique monsters and characters).

In fact, the only real story you’ll get are from events that happen from time-to-time where you must make choices to move forward. Other than that, the game is fueled almost entirely by its gameplay.

When you first start, you’ll have access to one character and one mode, but you eventually unlock more characters and modes, including a daily climb challenge and the ability to set your own custom modifiers.

So, how does it all work? Once you’ve chosen your character and you dive into the first floor of the spire, you’ll start with a basic hand of cards. Unlike other deckbuilding games, you won’t spend time carefully crafting a deck before you head out (unless you’re playing with a specific modifier on). Instead, you are allowed to choose a new card between battles or purchase them at a shopkeeper that appears randomly on the map during each run. This is brilliant because it still gives you the strategic option to build your deck out, but you do it piece by piece, like solving and ongoing puzzle.

It also forces you to consider which cards you really need, and which ones will just fluff out your deck to the point where you’re drawing things you don’t need. You can, of course, opt to skip out on drawing a new card for your deck and move to the next floor.

In Slay the Spire, the map is randomly generated each time. You start by choosing a starting room and move up through branching paths that ultimately end in a boss fight. To finish a single run completely, you’ll need to complete three maps or “Acts” with a boss at the end of each one.

In my time playing, I did manage to make it to the final boss once and almost got him. You see, Slay the Spire’s rooms aren’t always battles. Sometimes you’ll come across events where you can gamble for relics (special items), gold, or potions. There are also rooms that are simple chests for you to open, or camps where you can rest or upgrade a card of your choosing, so it’s not hard to move quickly through a floor in some runs.

However, you only draw cards after a fight, so rushing to the boss isn’t smart unless you have a good deck prepared. You can even opt for elite fights and guarantee a relic drop at the end if you survive.

So, with all this talk of what you can get, let’s talk about how you use it. Battles in Slay the Spire are turn-based affairs where you draw cards at the beginning of each turn and spend energy to use them based on their cost.

There are a huge number of cards, status effects, buffs, and debuffs for you to learn, but it’s surprisingly easy to pick everything up. One thing I liked is that you’re never timed when it’s your turn, so you can pause to use the d-pad and examine your status effects, consider bonuses from your relics, and read your cards.

Some cards do straight damage to the enemies, others apply debuffs like “weak” or “vulnerable” and still others even set up traps where enemies will take damage when they hit you. A key element to keep in mind too is “Block” which is applied by many different cards.

Block is your friend in Slay the Spire, because you’ll rarely find health potions. Instead, before your energy is out, you can play cards that add block points to your character. These can also do damage in some cases, but ultimately block provides a number of hit points to act as a shield during the enemy’s turn and continue until they run out.

An interesting element that I really enjoyed too was the fact that you draw a new hand every turn. This encourages you to play aggressively and use the options at your disposal since they won’t be there next turn. The first few runs may be long and slow, but once you have the hang of it, Slay the Spire becomes a flurry of attacks, status effects, blocks, and counters. It’s quite the visual spectacle when battles get intense.

Enemies can even place cards in your hand like “Daze” and “Burn” which are unplayable and seek only to mess up your hand when you draw them, so not even your deck is safe from attack.

What’s most important about all of this is that it’s incredibly fun. Is it complex and strategic? Yes, absolutely, but it moves at a pace that’s nothing short of intoxicating. Some will cry foul at the element of “luck,” but the more I played the more I realized luck was an exception rather than the rule. Smart deckbuilding, keep your card selections lean, and playing into your buffs/debuffs will always reward you with strong progression.

Intuitive Layout With Some Minor Hitches 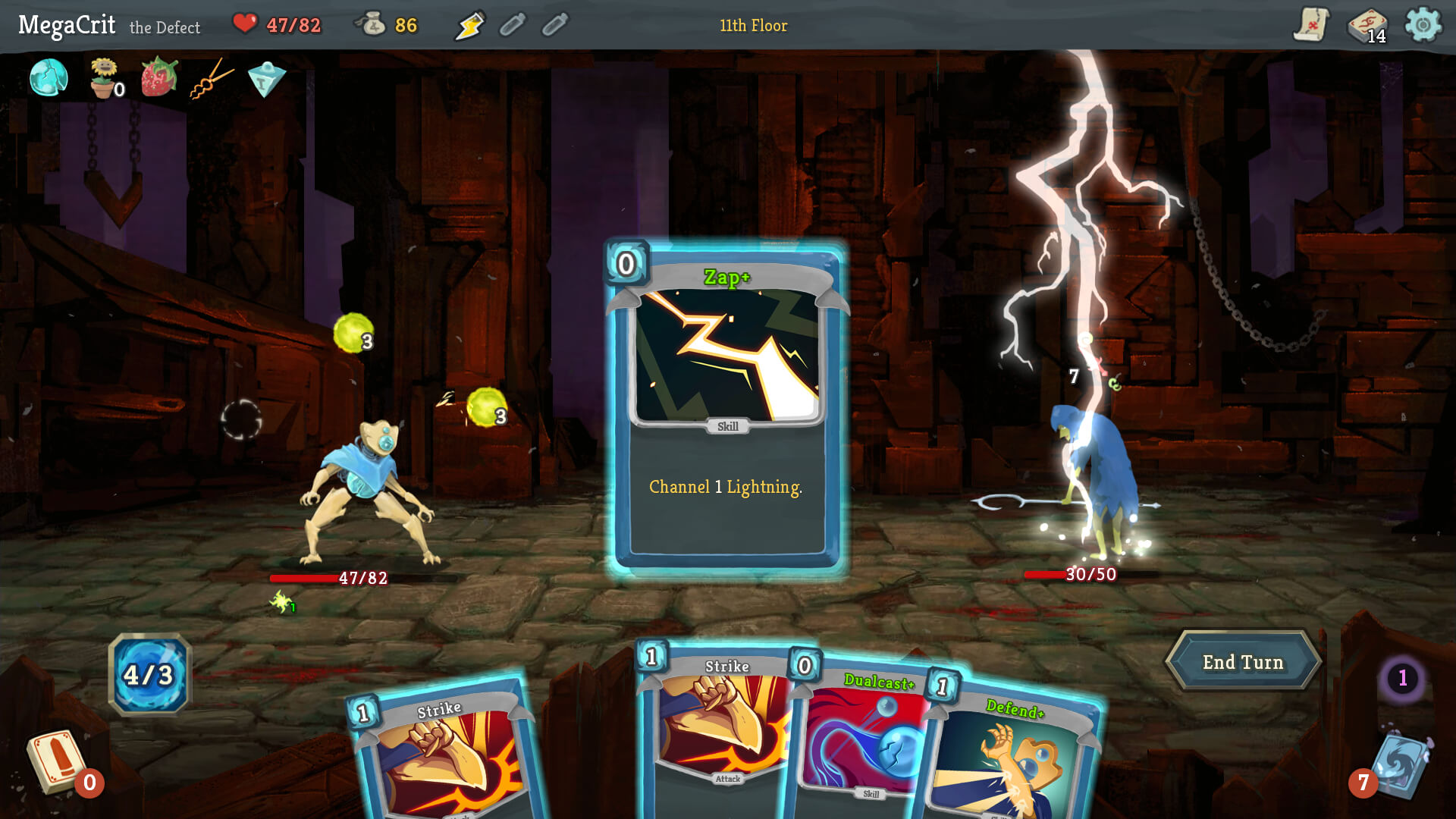 Slay the Spire is a slick looking game with smooth animations, great art, intriguing designs, and an intuitive user interface. It looks and plays really well, for the most part. I did run into occasional hitches and short freezes while playing on PS4 Pro.

These were annoying, but since the game is not reflex-based it has no impact on the gameplay whatsoever, so I was willing to look past it for the most part. I would like to see those hitches ironed out, if only to keep the experience smooth, but even with them it’s not a huge issue.

When I first installed Slay the Spire, I didn’t know what to expect. I certainly didn’t expect to play one of, if not the best, roguelikes I’ve ever experienced, but I can tell you one thing with absolute certainty: this spire is getting slayed.