The Sniper Elite series has been synonymous with superb shooting action and the iconic x-ray bullet camera that gives you a visceral look into your kills. While the games have come a long way since the early days, those looking to return to its roots will be happy to hear that Sniper Elite V2 Remastered is out now on PS4.

Having fully revamped the gameplay in the latest entry, should series veterans go back to an older version? More importantly, if you’ve never played the games, is this the place to start? Both valid questions, so let’s take aim and find out if this remaster hits the mark.

Sniper Elite V2 Remastered places you once again in the shoes of Karl Fairburne, a legendary sniper sent into Berlin during the final days of World War II. The mission is simple: prevent V2 rocket technology from falling into the hands of Russian soldiers while also helping crucial scientists defect to the US.

The game uses a mixture of war footage and narration, along with some real-time cutscenes, to move the story forward. It’s not a groundbreaking tale, but it does add some flavor to each of your missions and context to all the sniping goodness.

It’s really interesting to revisit Sniper Elite V2 Remastered after having played the third and drastically different fourth games in the series. It’s no secret that the gameplay, controls, and overall freedom have improved dramatically in the later games, but even with those things in mind, I liked the focus of this early entry.

While the latest version of the game offers wide open playgrounds and various mechanics to approach your objectives, Sniper Elite V2 Remastered has smaller level design with more focused and linear approaches to your targets.

That’s not to say there isn’t freedom though, you’ll still find yourself with several ways to approach an objective. The all out guns blazing approach also works pretty well if you have a vantage point and get a few good shots in before they spot you.

Jumping between the fourth entry and this one reveals that the remaster is indeed an older game in a lot of ways despite the polished visuals. Controls can feel really stiff in Sniper Elite V2 Remastered, and everything beyond your actual sniper rifle is clunky to use.

One thing that I really wished I had was a melee button, but I couldn’t find any way to bash enemies who got too close besides spraying and praying with my machine gun. The cover system works fine, but it also feels less responsive that I would like.

Even the animations themselves reflect the stiff nature of the controls. Whether you’re choking out an enemy, climbing up a ledge, or sprinting, nothing feels particularly smooth or responsive. Despite these things, though, Sniper Elite V2 Remastered does capture that classic sniping gunplay that (almost) redeems all of its lacking qualities.

When you in the moment, looking down the scope of your rifle, this game is at its best. The controls for aiming through the scope feel fantastic compared to other weapons. Higher difficulties require you to compensate for bullet drop, and the option to focus and hold her breath with R1 gives you the chance to line up your shots.

Other innovations, like the ability to time your shots with noise in your environment to mask the sound, still hold up today as unique mechanics. The bullet camera (which can be adjusted or disabled, but why would you?) is still a standout part of the experience.

When you make a particularly good shot, the camera follow the bullet across the vast distance and shows a close-up of the carnage. In some shots you’ll even see a detailed x-ray of the victim as the bullet shatters bone. Check out my tweet below to see a clip of the bullet cam in action:

It’s a shame the rest of the experience doesn’t feel as good as the actual sniping, but this remastered version only seems to touch upon the graphics and little else. 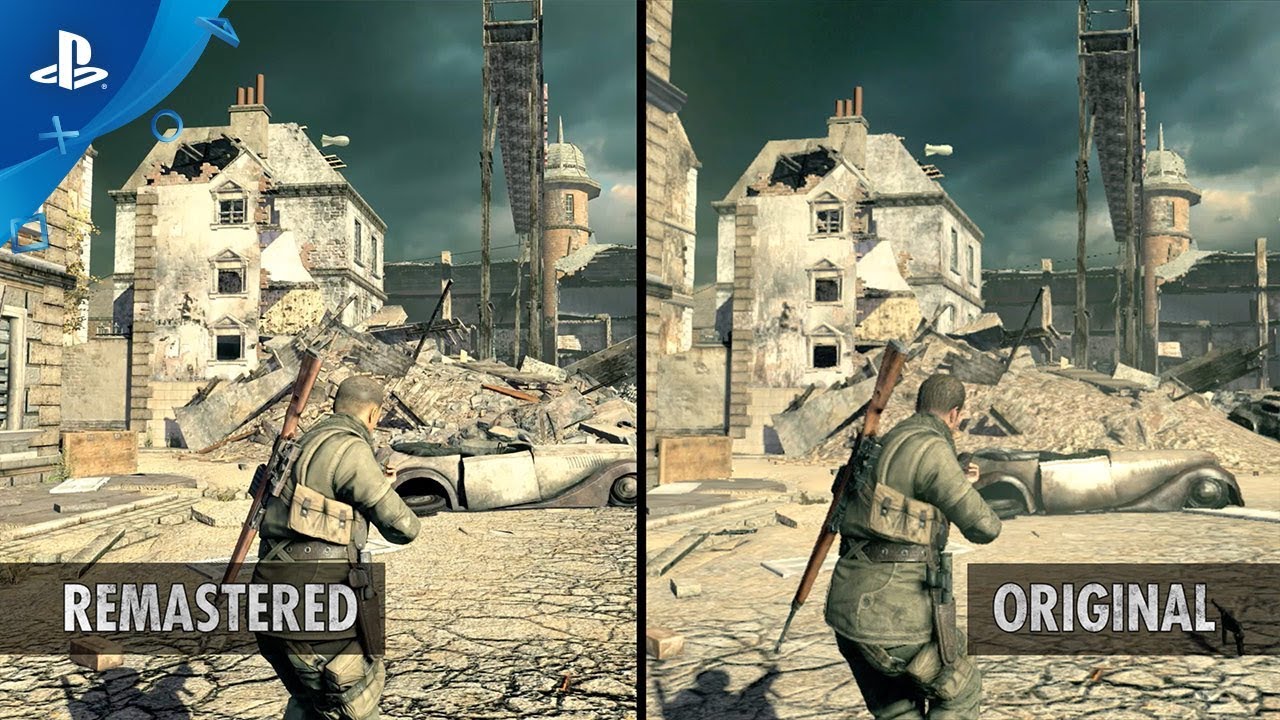 The visual upgrade in Sniper Elite V2 Remastered is certainly notable, with a crisp and clear picture and vastly improved textures on the environment. It still doesn’t rival many of today’s modern titles, but it certainly looks nice on an HD screen.

PS4 Pro owners do enjoy an option between performance and resolution, however. I played with performance enhanced and enjoyed the buttery smooth 60 frames-per-second gameplay, so I would recommend this to any Pro owners.

In the end, Sniper Elite V2 Remastered has plenty of rough edges in the gameplay, but when it comes to sniping you won’t find anything better than this series’ offerings. Those who have gotten used to the latest entry in the series may find it difficult to come back to the older style of gameplay, but if you have yet to try out these games and you want a budget-friendly entry point, this remaster will show you how much fun sniping can be if you’re able to overlook the other elements.